Protest activity and strikes will likely increase from November 15 to 17. Protest coordinators and organizers have reiterated their calls for protests and countrywide strikes on these days and also urged citizens to not pay their utility bills.[1] Social media accounts published videos on November 14 claiming to depict protesters traveling from Tabriz, East Azerbaijan to Tehran to demonstrate and “conquer” Tehran.[2] Other protesters have used similar rhetoric in recent days, calling for citizens to conquer a main Tehran highway during the upcoming protests, as CTP previously reported.[3]

Social media accounts are increasingly framing the ongoing protests as the culmination of past protest waves in Iran, which could increase protest turnout. Protest videos circulating on social media have connected the planned protests on November 15 to previous events, especially protest waves, in the Islamic Republic’s history, such as the regime’s mass execution of political prisoners in 1988 and the crackdowns on the student protests in 1999, the Green Movement in 2009, and the Bloody Aban protests in 2019.[4] This broadening message could resonate across the many different socio-economic classes and communities that have led past protest movements in Iran.

Former reformist President Mohammad Khatami called for reform in an Instagram post on November 14.[5] Khatami stated that the current governance in Iran is “wrong and erroneous” and called on Iranian authorities to empathize with and understand protester demands, especially the demands of the Iranian youth. Khatami stated that the collapse of the Islamic Republic is “not possible nor desirable” but warned that the regime failing to reform could lead to “social collapse.” The Instagram post is Khatami’s first major comment about the protests after he briefly criticized violence following the Shiraz attack on October 26.[6] The regime has banned state media from mentioning Khatami since at least 2010 to censor him and diminish his public presence.[7]

At least 10 protests took place in nine cities across nine provinces on November 14. Protests will likely increase in size and scale on November 15. CTP assesses with moderate to high confidence that protests occurred in the locations below.

CTP assesses with low confidence that protests occurred in the locations below. 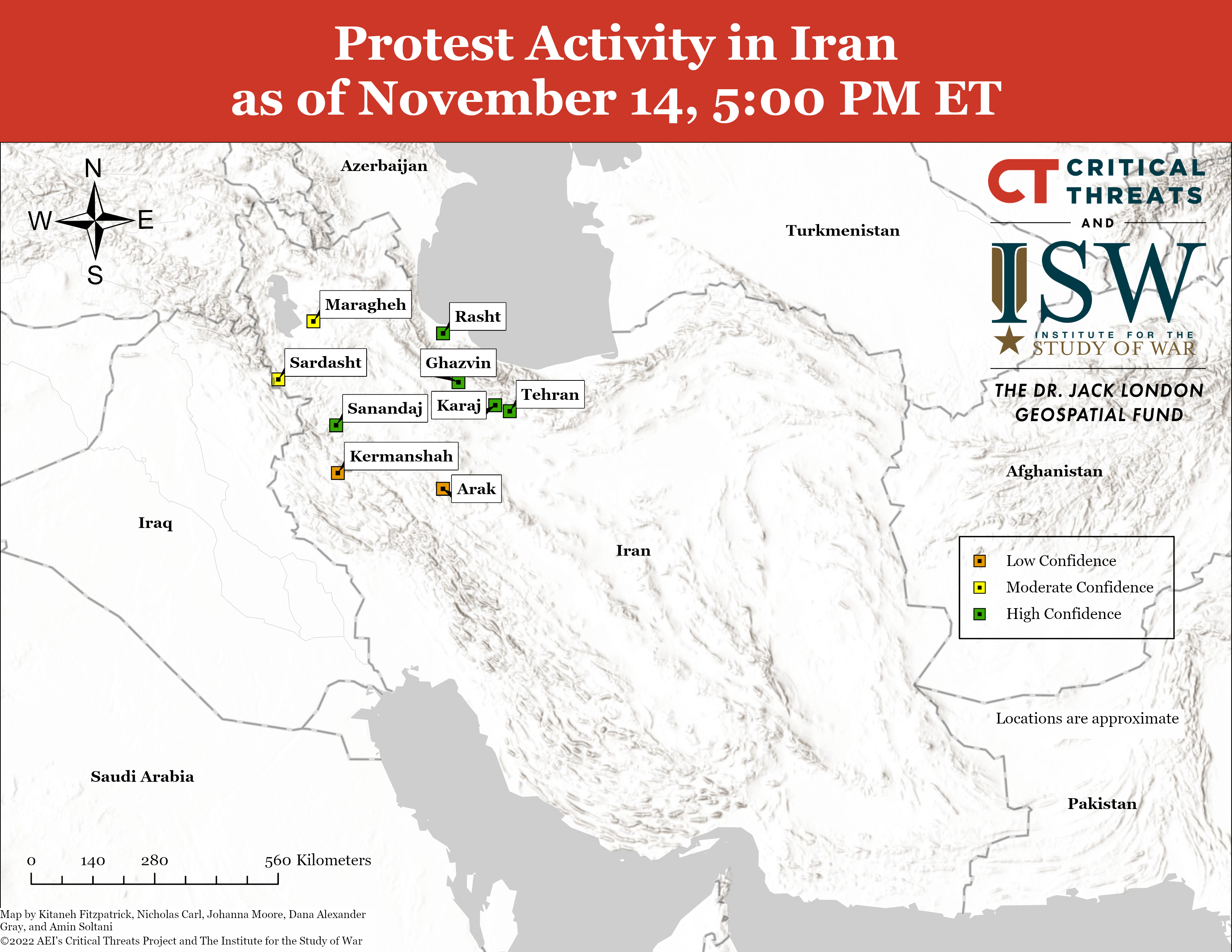 A Basij Organization member died on November 14 after unidentified gunmen shot him in Mashhad, Khorasan Razavi Province on October 14.[24] The Basij member was hospitalized and later succumbed to his injuries.

The New York Times published an article on November 14 detailing human rights violations that the regime is committing against arrested children.[28] Iranian security forces have reportedly sent 500 to 1,000 minors to detention centers, many of which might be adult detention centers. The regime is forcing children in juvenile detention centers to complete behavioral therapy under the supervision of a cleric and psychologist, who tell the arrested children to accept that they have committed acts of sin. Children who resist treatment are given psychiatric drugs. Education Minister Yousef Nouri previously stated on October 11 that the regime has sent arrested high schoolers to ”psychological centers” to educate and reform them, as CTP previously reported.[29]