Social media users circulated calls for protests following the US-Iran world cup match on November 29 although it is unclear to what extent these demonstrations will materialize. Some protest organization groups and other prominent social media users circulated calls for protests on November 29, possibly in an attempt to coopt or challenge pro-regime celebrations on city streets.[1] Some social media users disagreed with the November 29 call to protests and highlighted pre-organized protests scheduled for December 5-7.[2] Another anti-regime social media user circulated ways to support the protest movement until demonstrations resume on December 5, further suggesting that protesters remain focused on unrest planned for December 5-7.[3] The Neighborhood Youth of Karaj protest organization similarly alluded to requiring more time to reinforce its organizational capabilities and supplies before protests resume on December 5, as CTP previously reported.[4] Recent social media activity from groups purporting to be protest organizations suggest diverging approaches to coordinating unrest, one of which calls for large crowds and emphasizes continuous protest activity, the other of which seemingly requires more time and preparation. This rhetorical schism could indicate that protest organization groups remain primarily local and lack a coherent, nation-wide structure.

Black Reward has previously described itself as a group of anti-regime Iranian hackers who support the Mahsa Amini protest movement, although no entity has been able to confirm the group’s identity nor the veracity of their information.[8] The group previously claimed to have hacked sensitive information relating to the Iranian nuclear program on October 21.[9] CTP cannot authenticate Black Reward’s leaked audio file. The conversation does allude to intra-regime fractures congruent with CTP’s prior reporting and assessments, however, and is completely plausible if not verifiable. CTP does not regard this audio file as independent confirmation of previous assessments, however, as it has not been authenticated by any reputable actor.

The Iranian regime is coordinating with Qatari officials to suppress public acts of defiance among Iranians in Doha, including members of the Iranian national football team. An anonymous FIFA security official told CNN that IRGC members chastised Iranian players for failing to sing the national anthem in the November 21 match against England, suggesting that Qatar either assisted with or permitted IRGC extraterritorial operations in Doha. The source added that Iranian officials had threatened to torture the family members of Iran team players who demonstrated sympathy with anti-regime protesters and forbade them from interacting with foreigners.[10] The New York Times similarly reported on November 21 that Qatari officials banned Iranian fans from attending matches if they possessed pre-1979 Iranian flags, further corroborating reports of Qatari-Iranian cooperation to suppress anti-regime activity in Doha.[11] Anti-regime outlet Iran International additionally published a November 27 report claiming that Iranian and Qatari officials secretly coordinated to control which Iranians attend the World Cup matches.[12] The November 27 report included the leaked Black Reward audio file allegedly featuring Ghoureishi, wherein an official claimed that Basij officials had identified over 500 ”counterrevolutionaries” attending the tournament.[13] Ghoureishi claimed that Qatari officials promised to prevent Iranian attendees from displaying pre-1979 flags and engaging in other acts of dissent.[14]

At least 10 protests took place in six cities across six provinces. CTP assesses with high to moderate confidence that protests occurred in the following locations on November 28:

CTP assesses with low confidence that protests occurred in the following locations on November 28:

Note: CTP defines small protests as fewer than 100 individuals, medium protests as between 100 and 1,000, and protests as over one thousand. 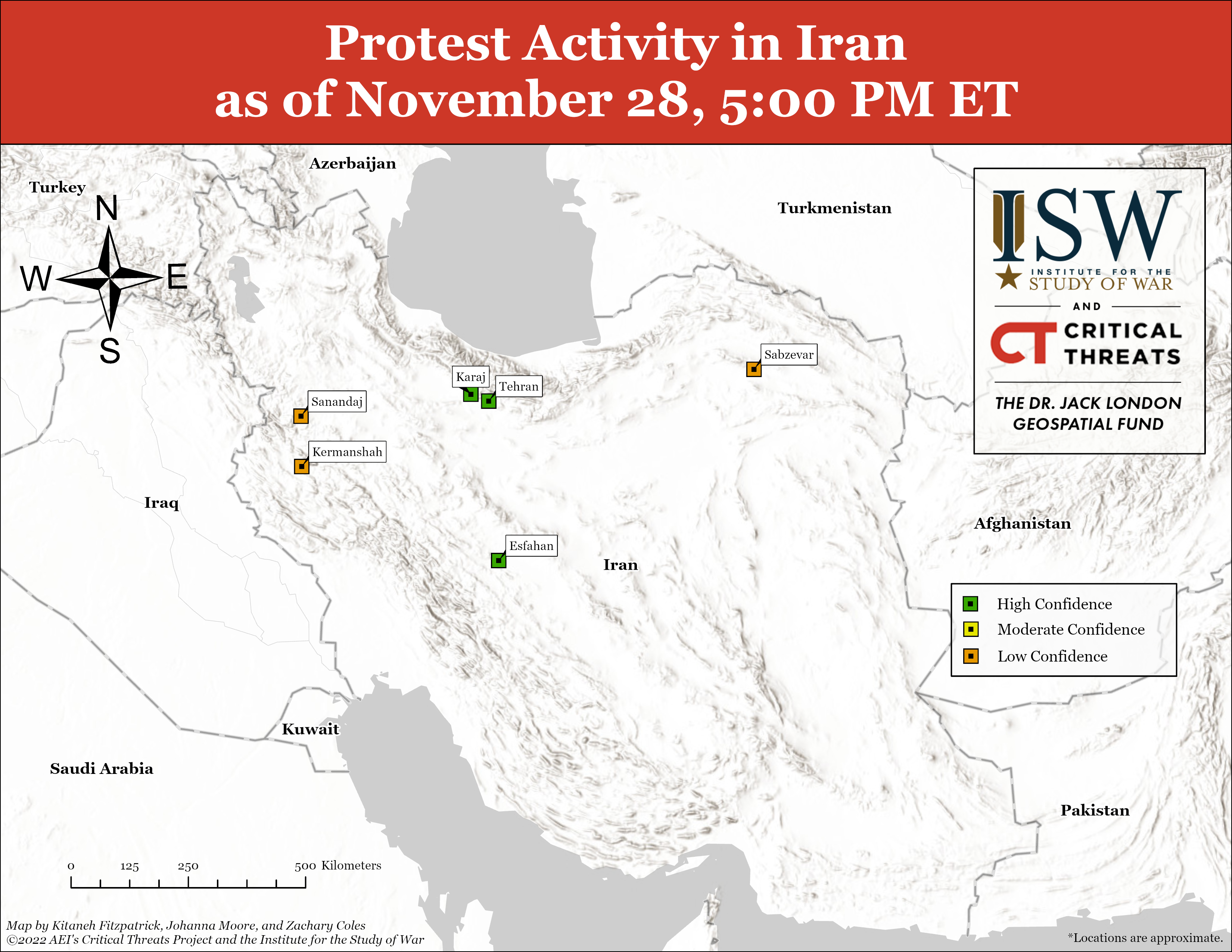 Supreme Leader Ayatollah Ali Khamenei met with senior commanders of the Artesh Navy on November 28 to commemorate a naval holiday. Khamenei’s speech was focused on naval operations and did not mention ongoing, anti-regime protests.[31]

The KRG deployment does not appear to meet Ghaani’s reported demands and may have angered Iranian officials, but it likely will decrease the prospect of the IRGC conducting ground operations against anti-regime Kurdish militants allegedly operating in Iraqi Kurdistan. The sizable KRG deployment and unfavorable terrain along the border make an IRGC ground operation unlikely to succeed. Armored and special forces units from the IRGC Ground Forces deployed to unspecified locations in northwestern and western Iran on November 25, as CTP has previously reported.[36] The deployment, however, is likely intended to aid in protest suppression in Iran’s restive Kurdish regions and to serve as additional leverage in negotiating with Baghdad and Erbil.[37] Iran may accuse Iraqi Kurdish forces of being ineffective in order to pressure the Iraqi government into security concessions to gain concessions and justify additional rocket and missile strikes in Iraqi Kurdistan. 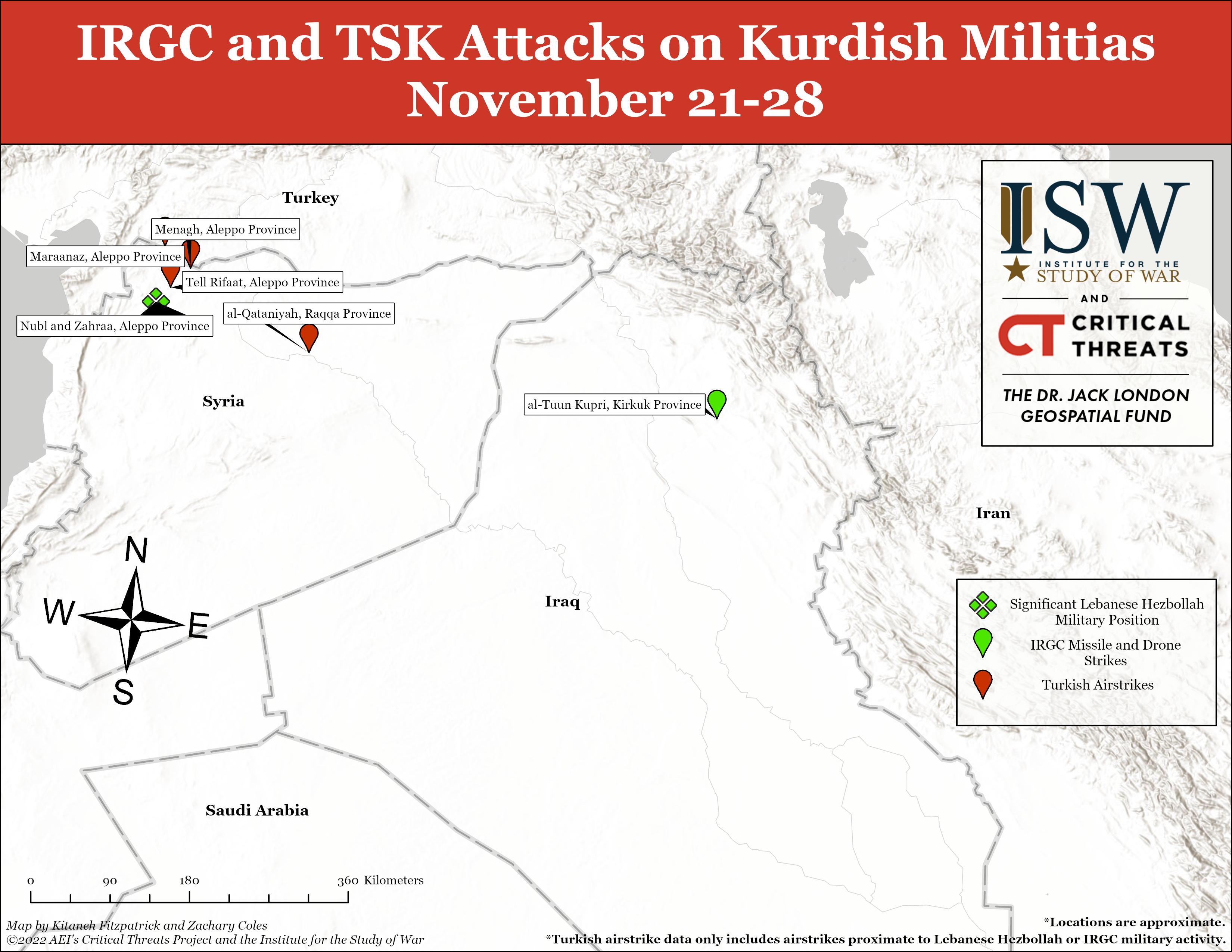