Some elements of the Iranian regime have suggested political reform to assuage protesters’ frustrations, although such reform is highly unlikely. Hassan Khomeini—the reformist grandson of Ruhollah Khomeini—called for a “majority-based democracy” in Iran on November 7.[1] Khomeini also implicitly criticized the Guardian Council—the state body constitutionally responsible for approving and vetting electoral candidates—for disqualifying prominent moderates and reformists from running in recent elections.

The Raisi administration amplified Khomeini’s remarks likely to placate disaffected citizens rather than support meaningful reform. The Islamic Republic News Agency (IRNA)—a Raisi administration mouthpiece—circulated Khomeini’s remarks and emphasized his calls for democracy.[2] President Ebrahim Raisi uses IRNA to promote pro-regime narratives and positive framing around his administration. IRNA’s circulation of Khomeini’s remarks is surprising given that the Guardian Council played a prominent role in helping Raisi win the presidential election in June 2021.[3] Raisi likely circulated this idea of reform—knowing it is improbable—to reduce protest activity. He is likely seeking additional ways to curb the ongoing protests given that the brutal crackdown has largely failed to stop protests.

The regime will not likely implement any electoral reform. Supreme Leader Ali Khamenei often uses the Guardian Council to manipulate elections and install his preferred candidates. Khamenei has allowed the Guardian Council to intervene more aggressively in elections in recent years to ensure hardliner victories in key elections, including the February 2020 legislative elections and the June 2021 presidential election.[4] Khamenei has historically emphasized the need to establish a hardline presidential administration in Iran to achieve his grand strategic ambition of forming a transnational Islamic civilization.[5] He likely considers the Guardian Council an essential tool toward realizing this vision and will not reduce its role in influencing elections.

Iranian security services have begun linking the Shiraz attack, which the Islamic State (IS) claimed, to Azerbaijan and accusing the Azerbaijani military of supporting Salafi-jihadi terrorism. The Intelligence and Security Ministry announced on November 7 the arrest of 26 terrorists connected to the Shiraz attack and claimed that the lead coordinator of the attack was an Azerbaijani citizen who received guidance from extremist groups in Azerbaijan and Afghanistan.[6] The ministry accused this individual of cooperating with Islamic State‘s Khorasan Province (ISKP). A Telegram account affiliated with the Islamic Revolutionary Guards Corps (IRGC) separately claimed on November 7 that the Azerbaijani military is promoting Wahabism and providing irregular warfare training to Salafi-jihadi militants who fought in Syria.[7]

This hostile rhetoric follows IRGC calls to annex parts of Azerbaijan. An IRGC-affiliated Telegram channel claimed that citizens of the Nakhchivan Autonomous Republic requested to join Iran on November 6.[8] IRGC Telegram channels called on the regime to economically and militarily support separatist movements in the Nakhchivan republic to join Iran on October 23, as CTP previously reported.[9]

IS central and ISKP have celebrated the Shiraz attack and called for more attacks against Shia targets in Iran.[10] It remains unclear whether IS central or ISKP had any role in preparing the attack or whether IS central and ISKP are celebrating the attack opportunistically. ISKP has used increasingly threatening rhetoric toward Iran since as early as June 2022.[11] IS central media outlets have begun increasingly translating Arabic-language propaganda into Persian since the Shiraz attack as well.[12]

At least 14 protests took place in 12 cities across seven provinces on November 7. CTP assesses with moderate to high confidence that protests occurred in the locations below. Protest activity may increase on November 11. Protest organizations have called for protests through Iran and especially in Zahedan, Sistan and Baluchistan Province, on November 11.[13] 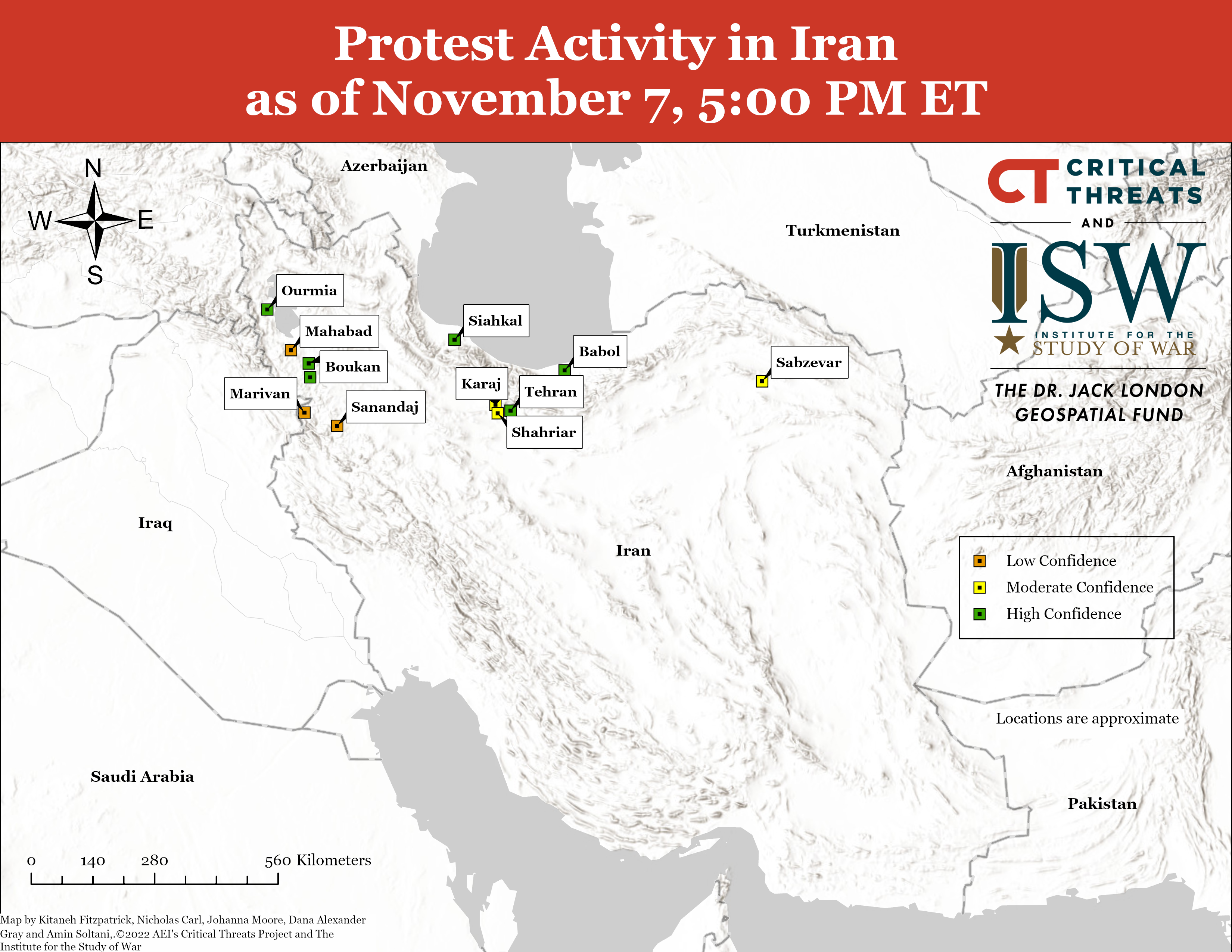 Jaish al Adl, a Salafi-jihadi militant group operating around the Iran-Pakistan border, released a statement calling for protesters to organize armed resistance against the regime on November 5.[28] Jaish al Adl previously published a video expressing support for protesters and threatening to conduct attacks inside Iran on October 20, as CTP previously reported.[29]

Five Basij university student organizations in Tehran penned an open letter urging officials to take action against Western embassies—specifically the UK and Germany—for their alleged role in stoking the ongoing protests. The organizations called on Foreign Affairs Minister Hossein Amir Abdollahian to escalate against Western embassies in Iran, alleging that he was “duty-bound to confront enemy diplomats present on Iranian soil.”[30] The Foreign Affairs Ministry has previously summoned the British and German ambassadors to condemn their perceived interference in protests in recent weeks.[31]

Judiciary Chief Gholam Hossein Mohseni Ejei called on judicial authorities to expedite the prosecution and sentencing of arrested protesters on November 7.[32] Ejei may have been indirectly responding to the letter from 227 parliamentarians on November 6 calling for harsh and rapid punishments for arrested protesters, which CTP previously reported.[33]