Regime disinformation about protester deaths may further stoke anti-regime sentiment and even revitalize anti-regime demonstrations. The regime released a report on October 8 alleging that Mahsa Amini died from an underlying illness, refuting evidence that she died from police brutality.[1] Iranian authorities are trying to deflect blame for Amini’s death. Regime-affiliated media outlets and officials similarly claimed that Sarina Esmail Zadeh and Nika Shakarami—two teenage protestors brutally killed by security forces--committed suicide.[2] Iranian social media users are increasingly commemorating Esmail Zadeh and Shakarami, who are serving as secular martyrs around whom protesters can rally.[3]

This blatant disinformation could increase turnout for planned university protests on October 8. Iranian students and some faculty members planned demonstrations on university campuses throughout Iran.[4] Social media users circulated calls for unrest on October 8, and protests could easily expand to include other disaffected citizens.[5] 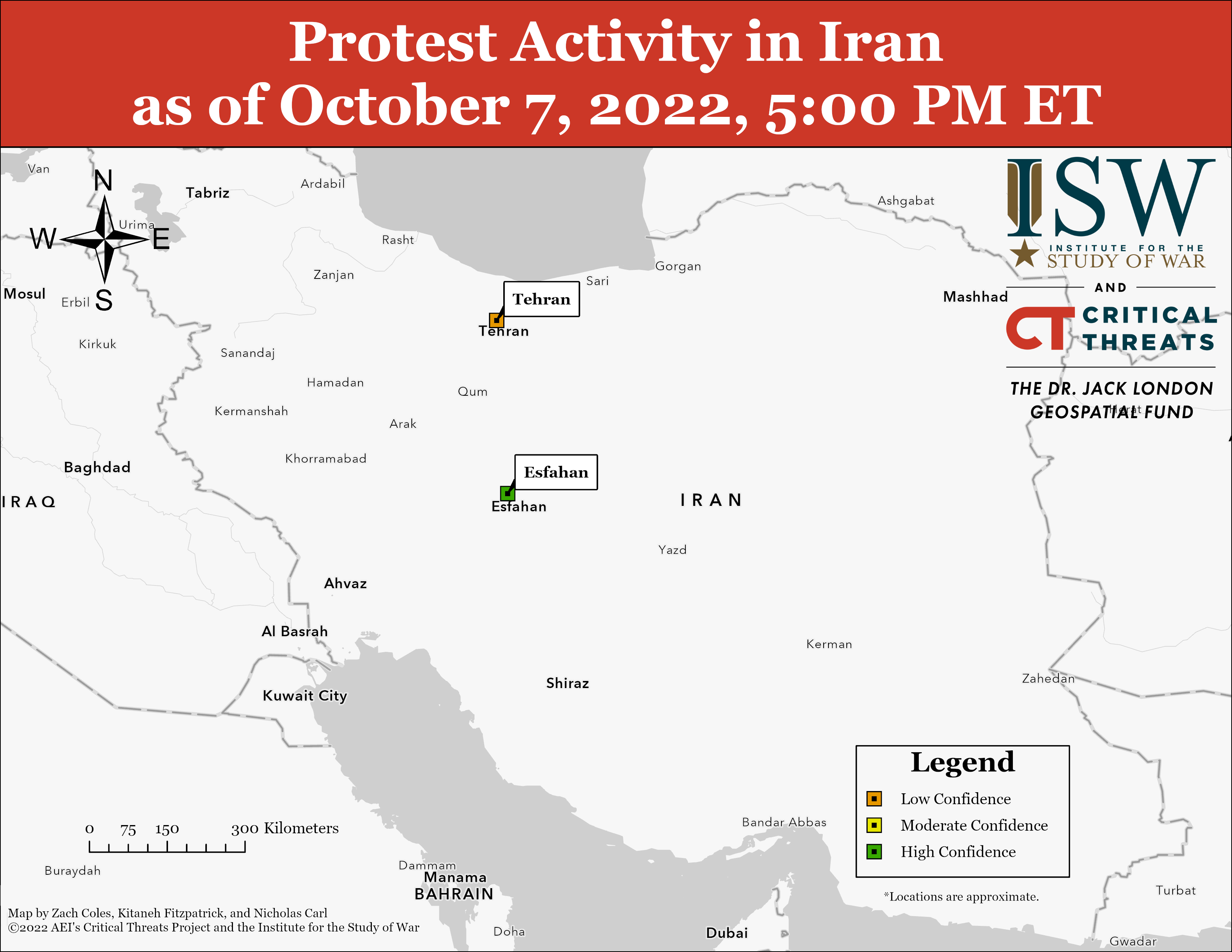 Ashtari may have met with Shirazi as part of a regime effort to garner support among the clerical establishment. An unidentified source told Iran International that Ashtari conveyed plans to Shirazi to restart morality patrols around the middle of the Persian calendar month Aban (October 23-November 21, 2022).[7] The regime may seek to cultivate support among the clerical establishment as it suppresses protests and restarts morality patrols. CTP previously reported that some senior clerics have criticized the regime more openly in recent weeks, and there are rumors of dissent among the students and teachers at major seminaries.[8]

President Ebrahim Raisi ordered Interior Minister IRGC Brigadier General Ahmad Vahidi to investigate the deadly clashes between protesters and security forces in Zahedan on September 30.[9] Vahidi will prepare a report on the clashes. Raisi entrusting Vahidi with this task highlights the extent to which IRGC officers will continue controlling regime narratives on the protests. Vahidi was the first commander of the IRGC Quds Force, serving from 1988 to 1998.

The US sanctioned seven Iranian political and security officials responsible for the regime crackdown and internet censorship on October 6.[10] The US targeted:

Canadian Prime Minister Justin Trudeau and Deputy Prime Minister Chrystia Freeland announced that plan to expand sanctions against the IRGC.[11] They also stated that they would ban top IRGC leaders from Canada. Freeland described the IRGC as a “terrorist organization.”

Several dozen Iraqi protesters gathered in front of the Iranian embassy in Baghdad to protest Iranian attacks into Iraqi Kurdistan.[16] The demonstration precedes the Iraqi parliament’s October 8 session to discuss the issue.

Iran may co-opt Houthi grievances to encourage the Houthis to attack Saudi Arabia from Yemen in retaliation for the role Iranian officials claim Saudi Arabia has played in stoking protests.[17] The civil war truce in Yemen lapsed on October 2, though the UN is still attempting to extend the truce and the Houthis have not yet resumed drone and missile attacks into Saudi Arabia.[18] The Houthis have threatened to attack Saudi and Emirati oil facilities in recent days if Saudi Arabia and the UAE fail to meet the Houthis’ demands to extend the truce.[19] Iran has previously encouraged Houthi attacks against Gulf states in response to regional dynamics, such as cooperation with Israel.[20]