Russian and Belarusian forces began deploying internationally in late July, nearly two months before the beginning of Zapad-2021 and far earlier than Russian forces have deployed for previous capstone exercises. Russian forces first arrived in Belarus via train on July 21 to begin final preparations for Zapad-2021.[2] As of August 3, open sources have confirmed company-sized elements of two Russian units based near Moscow, the 2nd Motor Rifle Division and 4th Tank Division, have deployed to Belarus with accompanying combat support elements.[3] The Belarusian military announced on July 30 that elements of the Belarusian 19th Mechanized Brigade will deploy to Russia as part of Zapad-2021, but the unit has not departed its home base as of August 3.[4] Russian forces only deployed to Belarus a week in advance during the previous iteration of Zapad in 2017 – compared to nearly two months in 2021.[5] Russian forces are likely deploying far in advance to set conditions for the later deployment of larger elements, and to practice establishing the joint battalion-level units Russian and Belarusian forces have constructed in several exercises since September 2020.[6]

Russian forces are additionally conducting final readiness checks in preparation for Zapad-2021. Russian forces have routinely conducted exercises in preparation for Zapad-2021 since March 2021. Russian Defense Minister Sergei Shoigu announced the beginning of the “active phase” of preparation for Zapad-2021 on June 1, and retroactively claimed Russia’s buildup of forces around Ukraine in March and April was a readiness check for Zapad-2021.[7] Individual Russian units have carried out small-scale exercises throughout the summer. Several branches of the Russian military conducted large-scale final exercises in July, however. Over 8,000 Russian military engineers conducted preparatory exercises in the Western Military District from July 27-30.[8] Over 5,000 Russian Military Police began readiness checks on July 30 in the Western, Southern, and Central Military Districts.[9] Russian Chief of the General Staff Valery Gerasimov conducted a check of ongoing “special exercises” in the Western Military District on July 30.[10] Belarus additionally invited Kazakhstan to participate in Zapad-2021 during a visit by the Chief of the Kazakh General to Belarus on August 2.[11] Kazakhstan has not confirmed its participation in Zapad-2021 but previously participated in Center-2019.[12] Additional Russian units will likely conduct final readiness checks and deploy to their training grounds for Zapad-2021 throughout August.

ISW will continue monitoring Russian and Belarusian preparations for Zapad-2021. The Kremlin will likely leverage Zapad-2021 to further integrate the Belarusian military into Russian-dominated command structures. The Kremlin may take advantage of Zapad-2021 to permanently deploy Russian forces in Belarus by claiming they are in Belarus for exercises and not withdrawing them. Self-proclaimed Belarusian President Alexander Lukashenko claimed on July 30 he has not discussed Russian bases in Belarus with Russian President Vladimir Putin, and that Russian troops will only deploy to Belarus if Belarusian forces could not handle a task.[13] The Kremlin has nonetheless deployed forces to Belarus on a rotating basis since September 2020 and will likely pressure Lukashenko to accept further Russian deployments.[14] 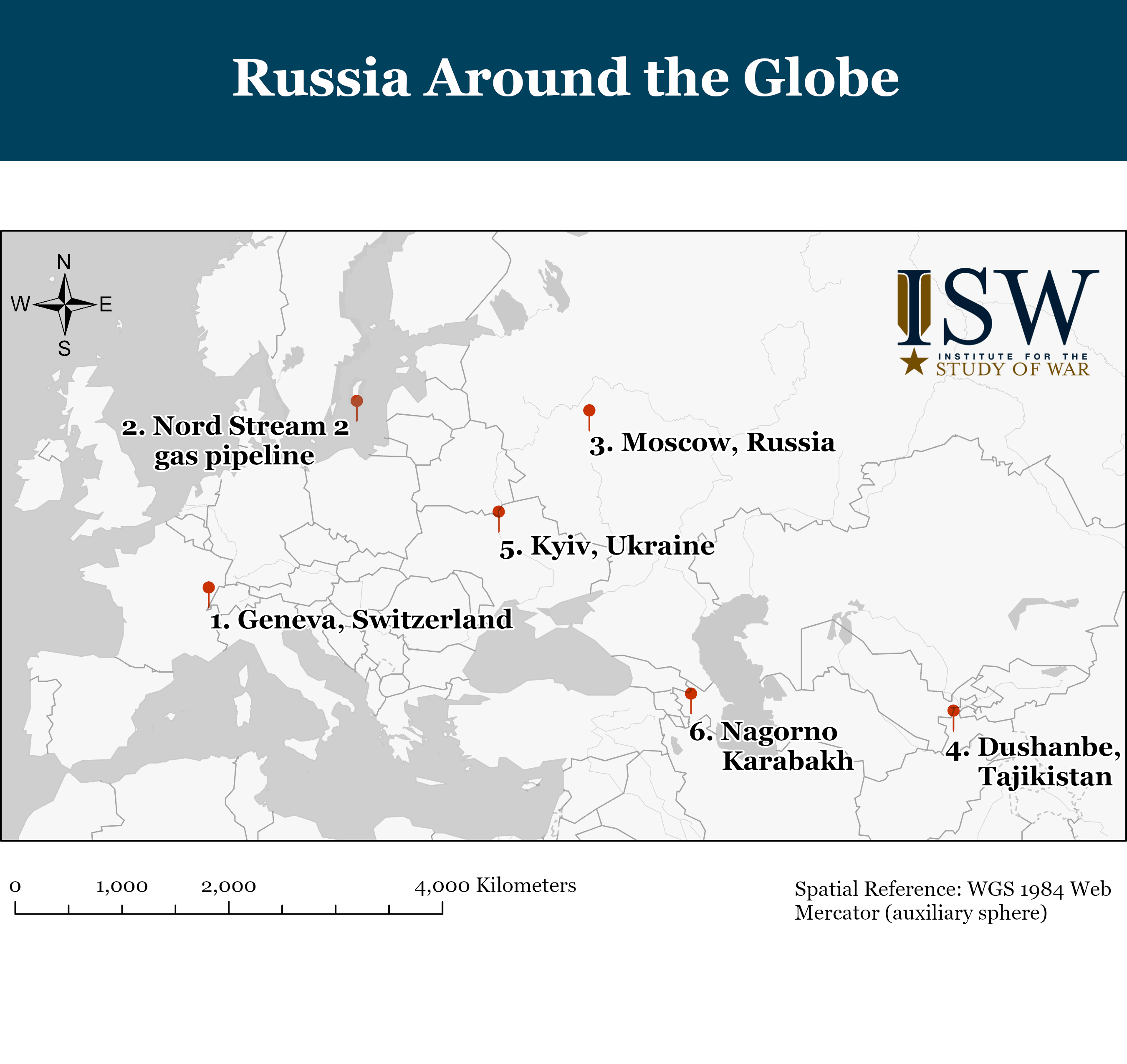 1. Russian Deputy Foreign Minister Sergey Ryabkov met with US Deputy Secretary of State Wendy Sherman in the first US-Russia “Strategic Stability” dialogue in Geneva on July 28, 2021. Russian President Vladimir Putin and US President Joe Biden agreed to begin these bilateral Strategic Stability talks during their summit in Geneva, Switzerland, on June 16. Both sides praised the tone of the talks but did not announce any formal agreements. The US State Department stated the talks, which focused on arms control and normalizing US-Russia relations, were “professional and substantive” and announced the next Strategic Stability meeting will occur in late September.[15] The Russian Foreign Ministry characterized the talks as constructive and stated Washington fulfilled unspecified obligations from the Geneva summit in June.[16] Ryabkov later caveated his praise of the talks and called for a new treaty to eliminate the deployment of short and intermediate-range missiles in Europe to replace the defunct Intermediate-Range Nuclear Forces Treaty, claiming US deployments “weaken European security.” The Strategic Stability dialogue may support the Biden administration’s objective of establishing regular high-level contacts with Russia. The Kremlin is unlikely to enter renewed arms control talks in good faith, however.

2. The United States dropped its opposition to Russia’s Nord Stream 2 pipeline in a joint statement with Germany on July 21, 2021, in exchange for several joint measures unlikely to deter the Kremlin’s use of the pipeline as a political weapon.[17] Ukraine and Poland denounced the agreement in a joint statement on July 21.[18] The nonbinding US-Germany agreement will not inhibit the Kremlin’s ability to use Nord Stream 2 as a weapon against Ukraine and Germany. Germany agreed to facilitate an extension to Ukraine’s current gas transit agreement with Russia and pledged to pursue national and EU sanctions in response to future Russian aggression against Ukraine as conditions of US acceptance of the pipeline. Germany will be unlikely to help secure an extension to the Ukrainian transit agreement without making further concessions to Russia, and it is unclear what additional “Russian aggression” would prompt Germany to pursue further sanctions. Nord Stream 2 will diversify Russia’s gas supply routes to Europe and allow the Kremlin to leverage those routes for political gain – both by increasing Germany’s reliance on Russian gas and by depriving Ukraine of gas transit fees.

3. The Kremlin successfully leveraged its 2021 International Air and Space Salon (MAKS 2021) to promote the Russian civilian and military aviation industry for foreign customers. MAKS 2021 occurred from July 20-25 near Moscow, in partnership with the government of Kazakhstan. Russian President Vladimir Putin stated Russia is taking its “rightful place” in the global aviation industry in his opening speech.[19] The director of Russia’s military import-export company Rosoboronexport, Alexander Mikheev, stated Rosoboronexport signed 13 export contracts worth more than a billion euros during the conference.[20] The Kremlin notably sold 21 MIG-29 light fighters to India, likely facilitating deeper military ties between India and Russia.[21] Mikheev announced that Turkey is in discussions to purchase an additional batch of S-400 missile systems from Russia.[22] Russian manufacturer Sukhoi additionally announced the new Su-75 “Checkmate” tactical fighter, likely intended as an export model.[23] The Kremlin’s international arms sales mitigate the effect of Western sanctions and advance the Kremlin’s efforts to create a network of potential military partners.

4. The Kremlin is increasing its outreach to potential international partners in response to growing instability in Afghanistan. The Kremlin initiated several Collective Security Treaty Organization (CSTO) and Shanghai Cooperation Organization (SCO) meetings in Tajikistan to consider approaches to the Afghanistan crisis throughout late July.[24] Russian Foreign Minister Lavrov and Russian President Putin engaged in at least five phone calls with their Central Asian counterparts in July in addition to these multilateral meetings.[25] Russian forces additionally continue to support military exercises by states bordering Afghanistan. Tajikistan mobilized its entire military - 100,000 servicemen and 130,000 reservists - on July 22 for the largest military exercise in Tajik history, but continues to rely on support from Russia’s 201st Military Base in Tajikistan.[26] Russia, Tajikistan, and Uzbekistan are holding further joint military exercises from August 5-10.[27] The Kremlin continues to call for direct negotiations with the Taliban through its Moscow Format peace negotiations.[28] The Kremlin’s increasing use of international organizations to support its Afghanistan policy is a shift from early July, the period covered by ISW’s previous Russia in Review.[29] The Kremlin likely seeks to leverage international organizations to support Russia’s military posture and diplomatic efforts in Central Asia and mitigate the possibility of other regional actors, including China, conducting unilateral responses to growing instability in Afghanistan which could challenge Russian efforts.

5. Ukrainian President Volodymyr Zelensky replaced several senior generals and advanced key military reform items in late July, likely in preparation for a planned visit to Washington, DC, on August 30. Zelensky dismissed the head of the Ukrainian Armed Forces Ruslan Khomchak on July 27, citing tensions between the Armed Forces and the Ministry of Defense.[30] Ukrainian Defense Minister Andreii Taran claims Khomchak refused to follow orders, while Khomchak claims Zelensky’s administration advanced legislation that impeded the military’s duties.[31] Zelensky subsequently fired Ukraine’s Joint Forces Operation (JFO) Commander, Chief of the General Staff, and Commander of the Air Assault Forces on July 28.[32] Zelensky announced on July 28 that the US and Ukraine agreed on three bilateral documents related to defense that will be signed during Zelensky’s trip to Washington on August 30.[33] Zelensky additionally signed laws to establish a national resistance force and increase the size of the Ukrainian military on July 29.[34] The national resistance law will develop territorial defense and resistance units and introduce a training system for Ukrainian citizens to conduct resistance operations in the event of a Russian invasion.[35] Zelensky likely seeks to increase Ukrainian military capabilities following Russia’s large-scale deployments on the Ukrainian border in April 2021 and consolidate his direction of Ukrainian military reforms ahead of his trip to Washington.

6. The Kremlin seeks to maintain its position as the main powerbroker in the Caucasus as tensions between Armenia and Azerbaijan escalate. Armenia and Azerbaijan have exchanged low-level fire and mutually accused each other of border violations since late May, when Armenian Prime Minister Nikol Pashinyan accused Azerbaijani forces of violating the Armenian border. Russian President Vladimir Putin emphasized the importance of a peace settlement and cooperation in a meeting with Azerbaijani President Aliyev Ilham on July 20.[36] Putin held a phone call with Pashinyan to discuss unblocking transport and economic channels in the Nagorno-Karabakh region on July 22.[37] Russian peacekeepers in Nagorno-Karabakh conducted exercises on preventing ceasefire violations on July 27.[38] Pashinyan called for a deployment of Collective Security Treaty Organization observers or Russian peacekeepers along the border on July 29.[39] The Kremlin did not publicly respond to Pashinyan’s request for additional deployments, but stated it is concerned about the escalation and will provide all necessary assistance to normalize the situation.[40] The Kremlin seeks to maintain good ties with both Armenia and Azerbaijan to prevent a breakdown in the Kremlin-mediated end of the November 2020 Nagorno-Karabakh war and prevent further Turkish influence in the region. The Kremlin retains the option to deploy additional forces or leverage the CSTO in the Caucasus but will likely prioritize potential deployments on Afghanistan’s borders.

[13] “Lukashenko: Deployment of Russian Bases in Belarus has Never Been Discussed at the President Level,” Belta, July 30, 2021, https://eng.belta dot by/president/view/lukashenko-deployment-of-russian-bases-in-belarus-has-never-been-discussed-at-the-president-level-142093-2021/.

[17] “Joint Statement of the United States and Germany on Support for Ukraine, European Energy Security, and our Climate Goals,” US Department of State, July 21, 2021, https://www.state.gov/joint-statement-of-the-united-states-and-germany-o....

[24] [“The Head of the Russian Military Department Took Part in the Meeting of the Defense Ministers of the SCO Member States,”] Russian Ministry of Defense, July 28, 2021, https://function.mil dot ru/news_page/country/more.htm?id=[email protected]; [“Results of the Meeting of the Council of Foreign Ministers of the SCO Member States,”] Russian Foreign Ministry, July 14, 2021, https://www.mid dot ru/ru/foreign_policy/news/-/asset_publisher/cKNonkJE02Bw/content/id/4813312; [“Khasan Sultonov, Permanent and Plenipotentiary Representative of the Republic of Tajikistan to the CSTO, Informed the Members of the Organization's Permanent Council about the Situation on the Tajik-Afghan Border,”] Collestive Security Treaty Organization, July 7, 2021, https://en.odkb-csto dot org/news/news_odkb/postoyannyy-i-polnomochnyy-predstavitel-respubliki-tadzhikistan-pri-odkb-khasan-sultonov-proinformir/.

[33] Anastasia Horbacheva, [“Ukraine and the United States Agreed to Sign Three Documents: What They Are Talking About,”] Unian, July 29, 2021, https://www.unian dot ua/politics/ukrajina-i-ssha-domovilisya-pidpisati-tri-dokumenti-pro-shcho-yde-mova-novini-ukrajina-11496778.html.