ISW is publishing an abbreviated campaign update today, January 8. This report discusses the Russian Ministry of Defense’s (MoD) attempts to claim that Russian forces responded to the December 31 Ukrainian strike on Russian positions in Makiivka; the Russian MoD’s use of a grievance-and-retaliation framework and the resulting creation of negative feedback loops in the pro-war Russian information space; Wagner Group financier Yevgeny Prigozhin’s potential attempts to financially exploit Ukrainian natural resources around Bakhmut; and the United Kingdom Ministry of Defense’s (UK MoD) assessment that Russian forces may be preparing for Ukrainian counteroffensive actions along the Zaporizhia and Luhansk oblast frontlines.

The Russian MoD’s attempts to claim Russian forces responded to the December 31 Ukrainian strike against Russian positions in Makiivka are generating further discontent in the Russian information space. The Russian MoD announced on January 8 that Russian forces conducted a “retaliation operation” against Ukrainian forces for the December 31 strike on Makiivka that killed up to 400 mobilized soldiers due to Russian command failures and poor personnel dispersal practices.[1] The Russian MoD falsely claimed the retaliatory strike targeted several temporary Ukrainian deployment points in Kramatorsk, Donetsk Oblast, and killed over 600 Ukrainian personnel.[2] This claim is false — a Finnish reporter visited the site of the strike in Kramatorsk on January 8 and noted that it hit an empty school.[3] Several Russian milbloggers responded negatively to the Russian MoD’s claim, pointing out that the Russian MoD frequently presents fraudulent claims and criticizing Russian military leadership for fabricating a story to “retaliate” for the Makiivka strike instead of holding Russian leadership responsible for the losses accountable.[4]

The Russian MoD application of a grievance-and-retaliation framework to many of its operations has created a negative feedback loop with prominent members of the pro-war Russian information space. At the beginning of the massive campaign of strikes against Ukrainian critical infrastructure in October 2022, the Russian MoD employed a similar framing of “retaliation” against claimed Ukrainian strikes on the Kerch Strait Bridge and other Russian infrastructure.[5] The Russian MoD partially used this framing to mollify escalated demands from the pro-war community to “avenge” Ukrainian actions but provoked an array of responses from milbloggers outlining other instances that the Russian MoD should equally “retaliate” for.[6] The Russian MoD has thus created a negative feedback loop, wherein it attempts to respond to Ukrainian offensive successes with a discrete, retaliatory, offensive action, which then opens the MoD up to continued criticism from discontented Russian milbloggers highlighting their beliefs that the MoD is responding in the wrong manner or to the wrong event. The Russian MoD’s response to the Makiivka strike is a clear continuation of this grievance-and-retaliation model that has once again opened Russian military leadership to staunch criticism of their conduct of the war.

Wagner Group financier Yevgeny Prigozhin may be attempting to financially exploit Ukrainian natural resources around Bakhmut and is using the war in Ukraine to connect his military forces with Russian regional officials. An unnamed White House official stated on January 5 that the United States believes Prigozhin seeks to extract salt and gypsum from mines in the Bakhmut area for monetary gain.[7] Prigozhin attempted to justify the importance of mines around Bakhmut and Soledar (which Russian forces have struggled to capture from Ukrainian defenders) on January 7, stating that these mines have “unique and historic defenses” that act as a “network of underground cities.”[8] Prigozhin added that these mines can house personnel and military equipment up to a depth of 80 to 100 meters and claimed that these mines are stocked with weaponry from World War I. Prigozhin’s statements are likely an attempt to both explain the slow pace of Wagner’s advances around Bakhmut but may also partially explain his months-long and costly determination to establish control of the area. A former Russian officer and milblogger criticized Prigozhin and Russian commanders, stating that everyone knew about the existence of these mines when developing an offensive plan and dismissed the claim of the presence of historic weapons in the area.[9] The milblogger also noted even if Russian forces and Wagner troops seize Soledar, Prigozhin and the Russian military will lose strategically due to committing their best forces to an attritional battle.[10] ISW had previously reported that another Russian silovik, Chechen leader Ramzan Kadyrov, is reportedly attempting to secure business opportunities in occupied Mariupol.[11]

Prigozhin is also continuing to publicly align himself with select Russian governors in an effort to increase his influence and advance his personal interests in Russia, as opposed to strictly winning the war. Kursk Oblast Governor Roman Starovoit visited the Wagner training facility for the Kursk Oblast People’s Militia on January 8 and reportedly trained alongside Prigozhin and “real men” who are patriots during his visit.[12] Russian outlets claimed that Starovoit even received an offer to sign a contract with Wagner, which he declined due to his public duties.[13] Some Russian outlets even framed Starovoit’s visit to the training ground as model behavior for a Russian politician, further boosting Prigozhin’s image as a patriotic wartime leader in the Russian information space.[14] Prigozhin is likely attempting to rally up support for the legalization of Wagner Group in Russia.

The United Kingdom Ministry of Defense (UK MoD) confirmed ISW’s previous assessments that Russian forces are preparing for the possibility of future Ukrainian counteroffensives in Zaporizhia or Luhansk oblasts. The UK MoD reported on January 8 that in recent weeks, Russian forces have expanded defensive fortifications in Zaporizhia Oblast along the Vasylivka-Orikhkiv line and are maintaining a large force grouping in this sector in a way that suggests that Russian commanders are concerned by the possibility of a major Ukrainian counteroffensive push in southern Ukraine.[15] The UK MoD suggested that Russian forces are facing two equally exigent counteroffensive scenarios: A Ukrainian breakthrough on the Zaporizhia line that could seriously challenge the viability of the Russian land bridge linking Rostov Oblast with occupied Crimea, or a Ukrainian breakthrough in Luhansk Oblast that could further unhinge the Russian offensive objective of occupying the entirety of Donbas.[16] ISW has previously noted indicators of preparations for a Russian decisive effort (likely of a defensive nature) along the Svatove-Kreminna line in Luhansk Oblast and assessed that the Russian force posture and prevalence of defensive structures in Zaporizhia Oblast suggest that Russian forces may be preparing for potential Ukrainian efforts against this sector.[17] 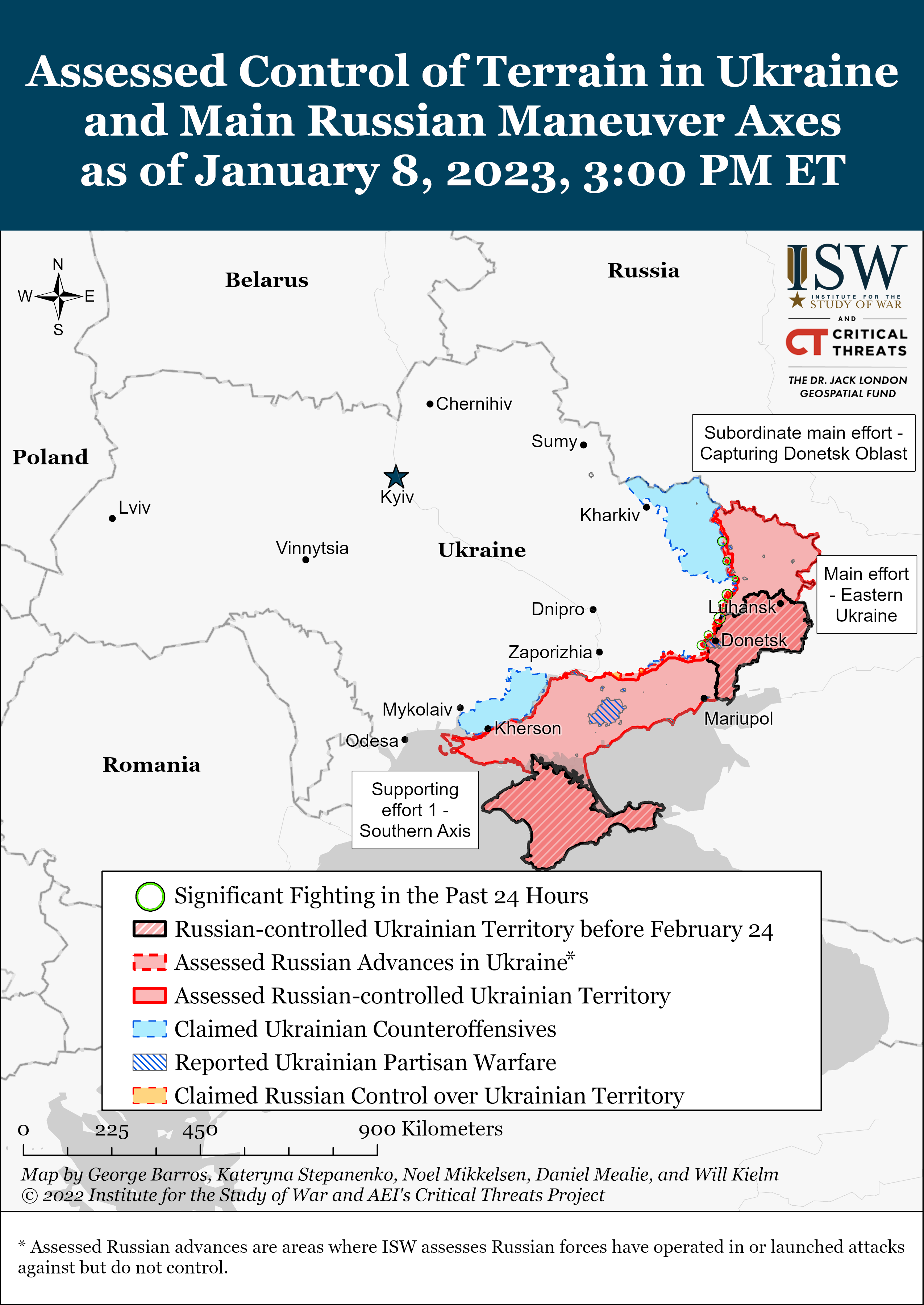 ISW will continue to report daily observed indicators consistent with the current assessed most dangerous course of action (MDCOA): a renewed invasion of northern Ukraine possibly aimed at Kyiv.

ISW’s December 15 MDCOA warning forecast about a potential Russian offensive against northern Ukraine in winter 2023 remains a worst-case scenario within the forecast cone. ISW currently assesses the risk of a Russian invasion of Ukraine from Belarus as low, but possible, and the risk of Belarusian direct involvement as very low. This new section in the daily update is not in itself a forecast or assessment. It lays out the daily observed indicators we are using to refine our assessments and forecasts, which we expect to update regularly. Our assessment that the MDCOA remains unlikely has not changed. We will update this header if the assessment changes.

Observed indicators for the MDCOA in the past 24 hours:

Observed ambiguous indicators for MDCOA in the past 24 hours: 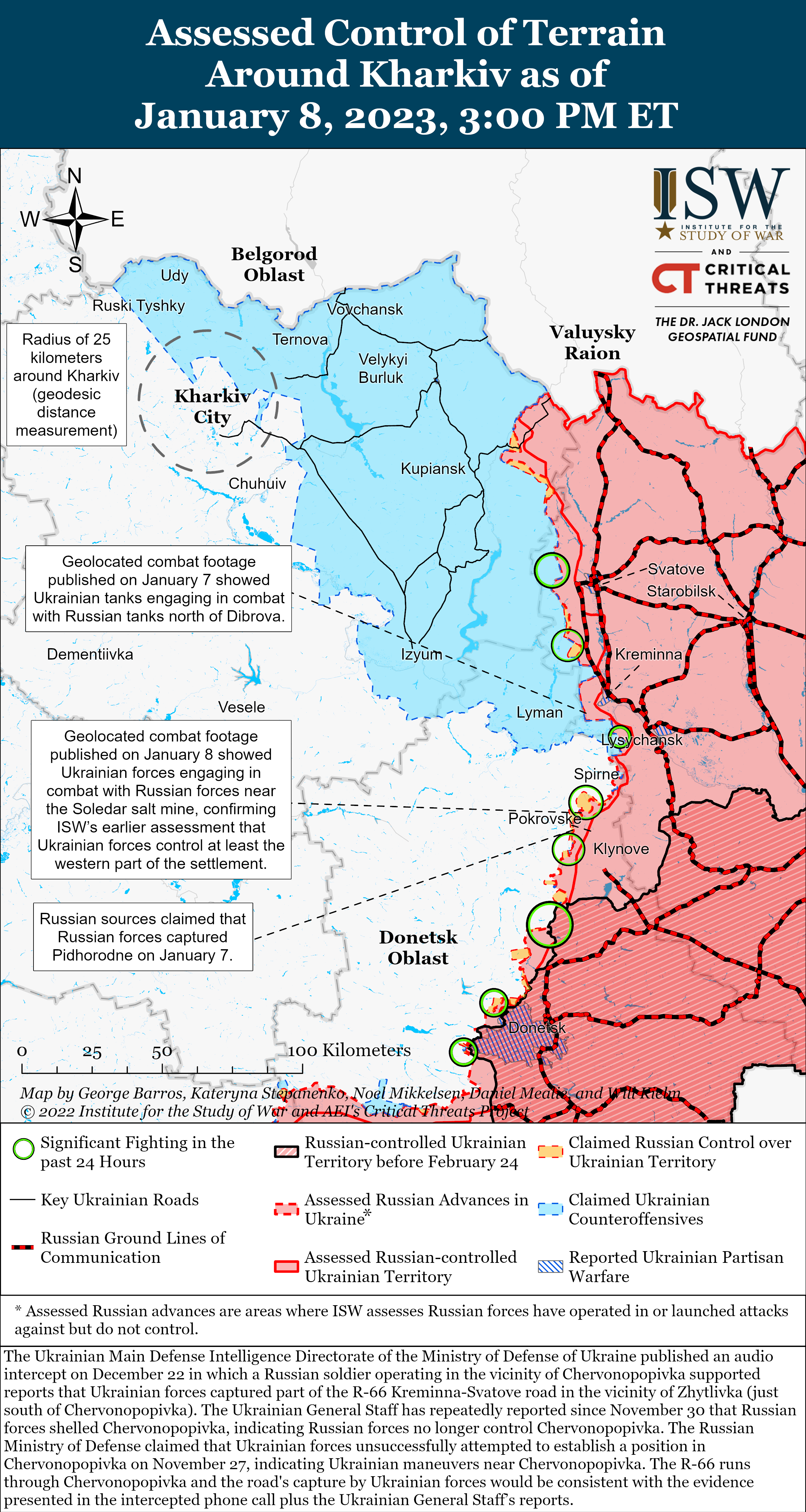 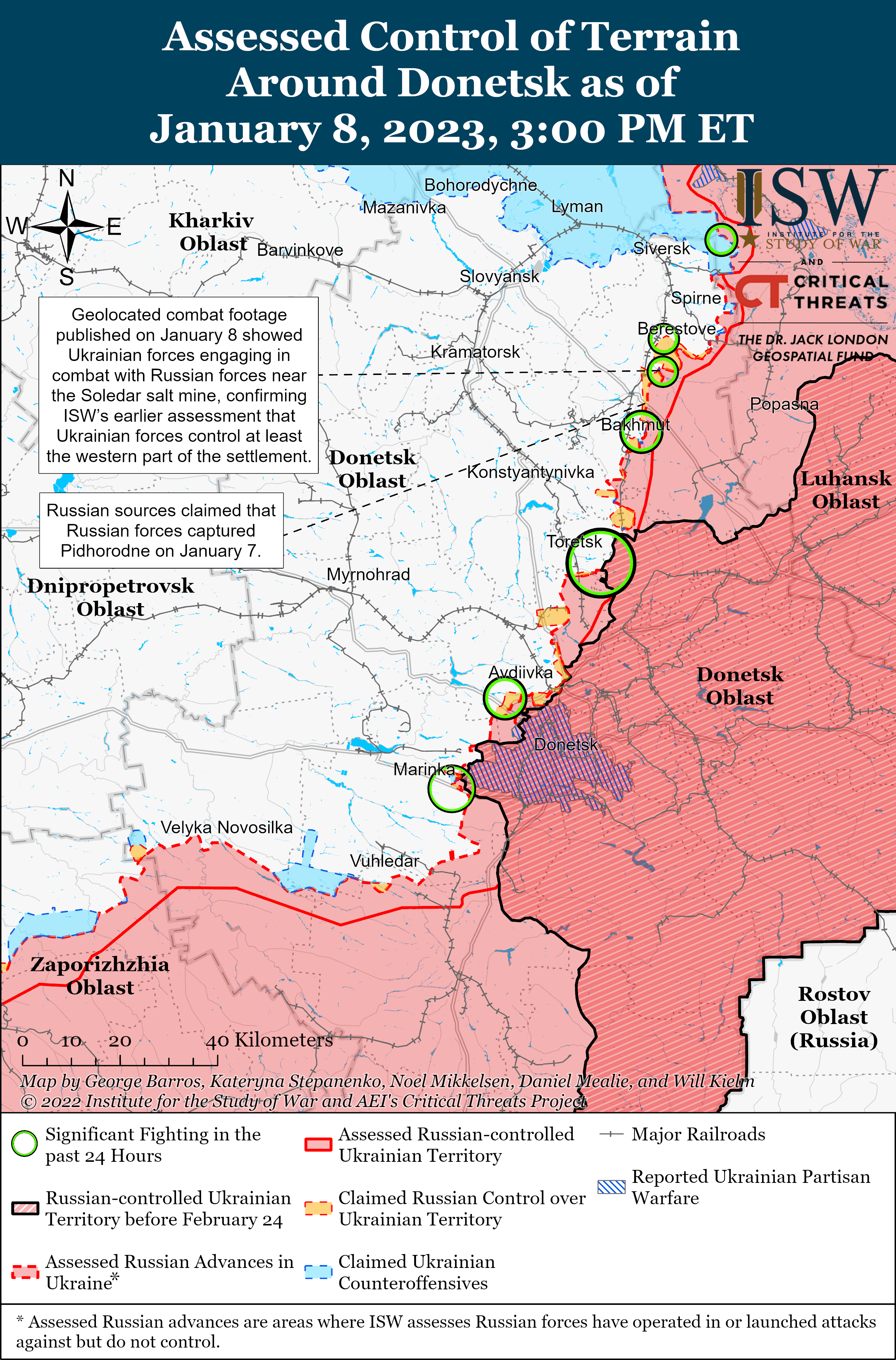 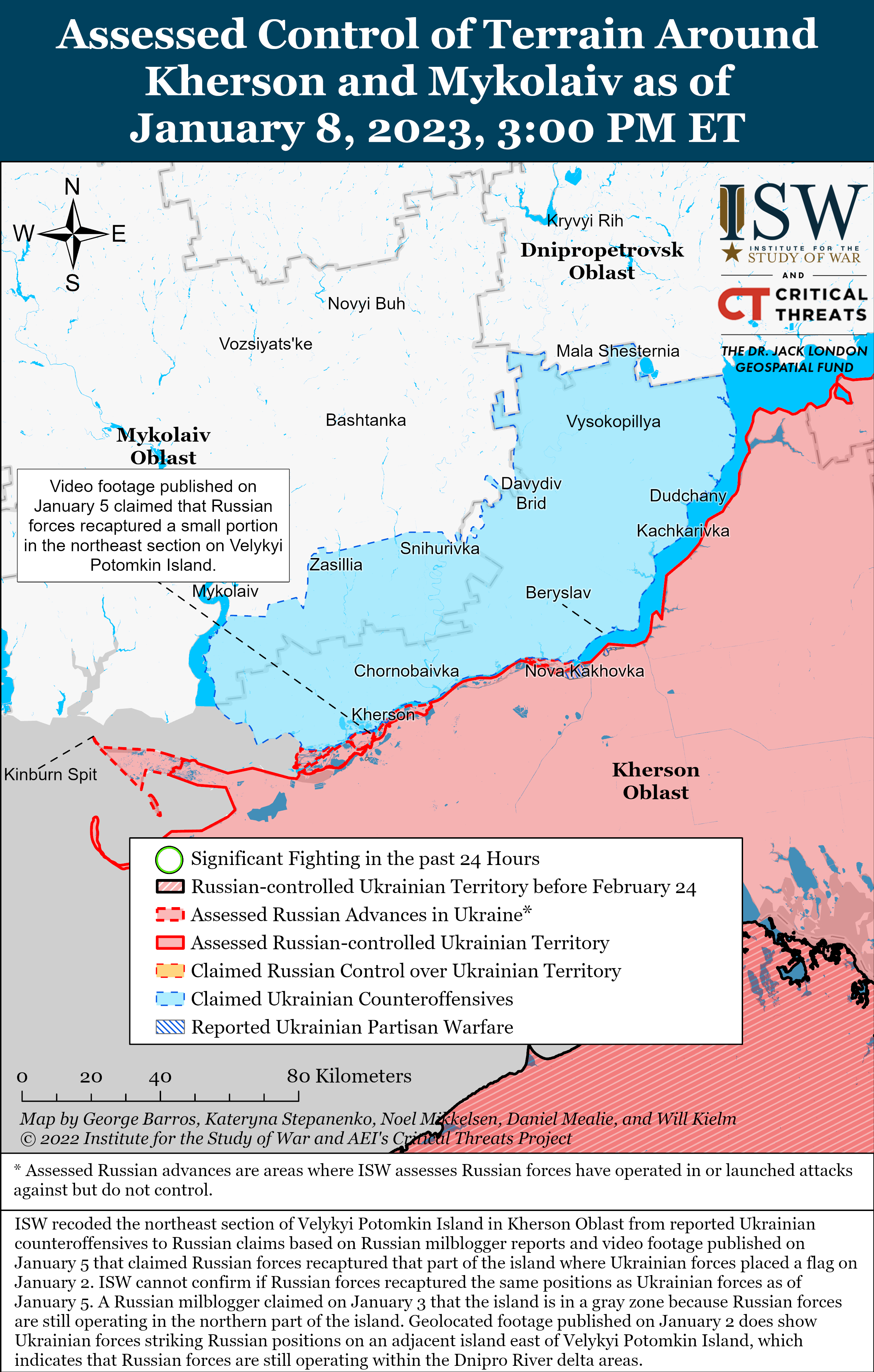