Russian forces will likely next advance on Siversk, though they could launch more significant attacks on Bakhmut or Slovyansk instead or at the same time. Ukrainian forces will likely continue their fighting withdrawal toward the E40 highway that runs from Slovyansk through Bakhmut toward Debaltseve. It is unclear whether they will choose to defend around Siversk at this time.

Two very senior Russian commanders are reportedly responsible for the tactical activities around Lysychansk. Commander of the Central Military District Colonel General Aleksandr Lapin and Commander of the Russian Aerospace Forces Army General Sergey Suvorikin (who also commands Russia’s “southern” group of troops in Ukraine) have been responsible for securing Lysychansk and the area to the west of it respectively.[4] The involvement of two such senior officers in the same undertaking in a small part of the front is remarkable and likely indicates the significance that Russian President Vladimir Putin has attributed to securing Lysychansk and the Luhansk Oblast border as well as his lack of confidence in more junior officers to do the job. 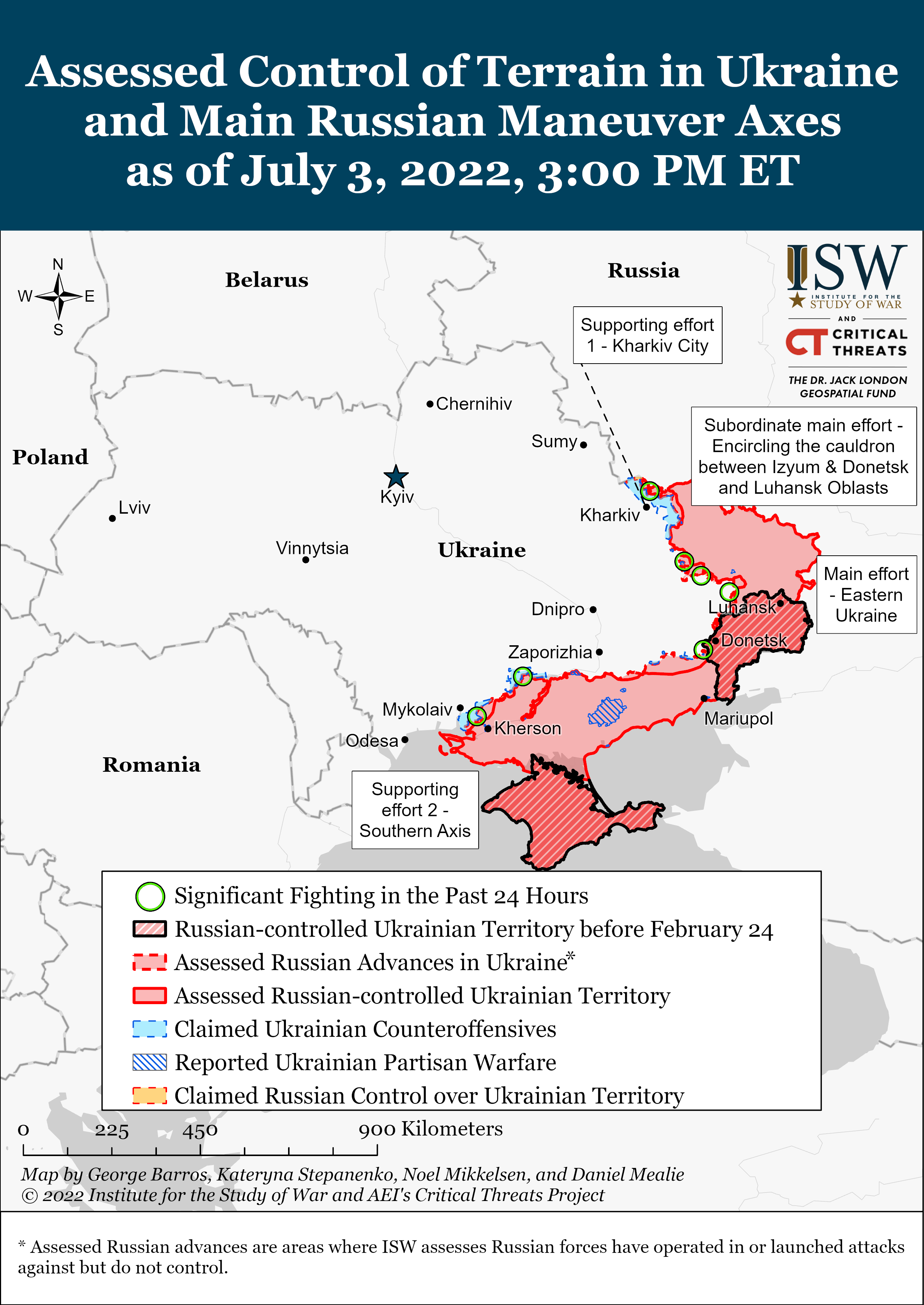 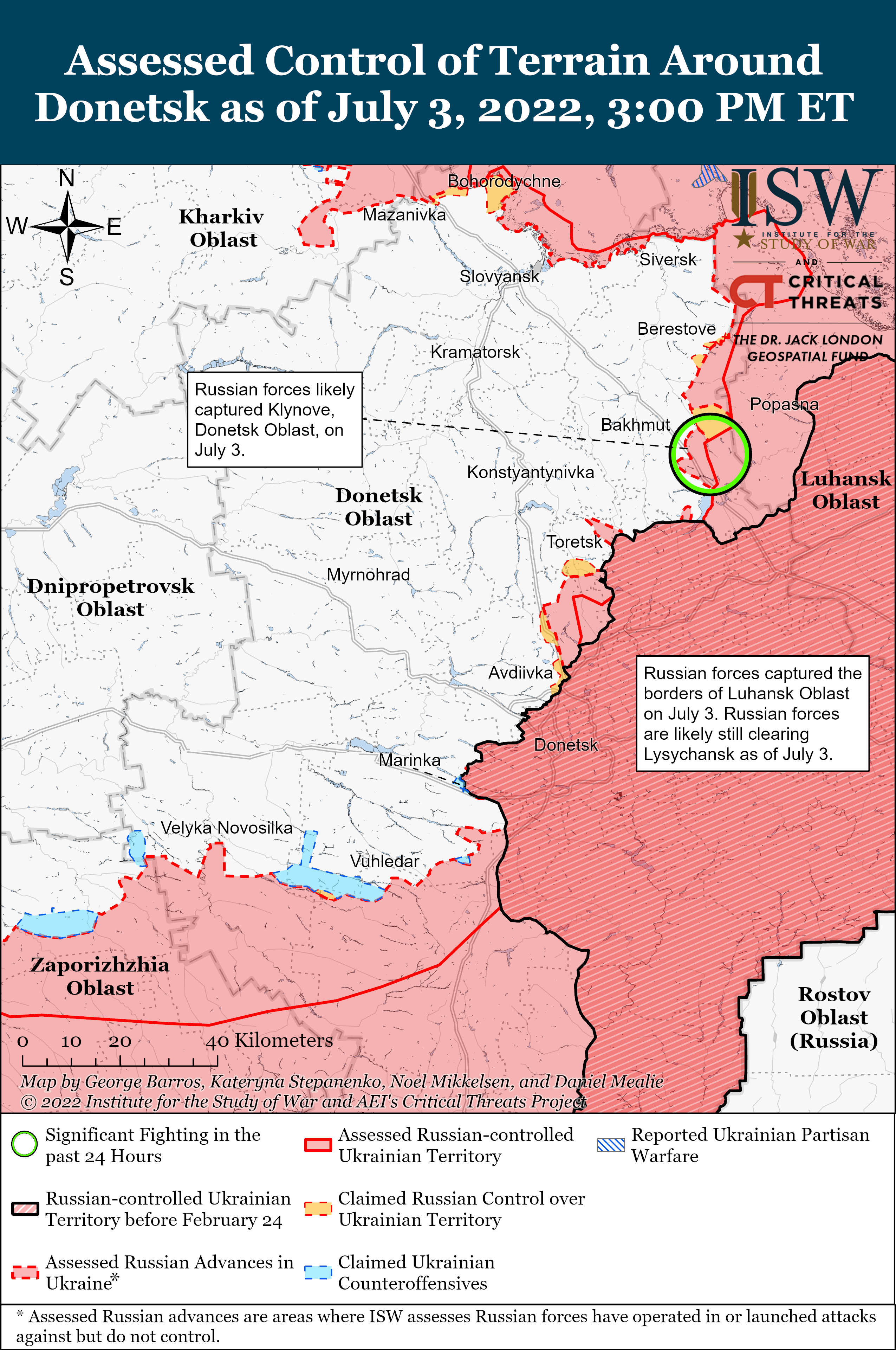 Russian forces launched assaults northeast of Bakhmut in an effort to capture the remaining settlements along the Luhansk Oblast administrative borders. The Ukrainian General Staff reported that Russian forces launched unsuccessful assaults from Nyrokove on Berestove, indicating that Russian forces established control over Nyrkove on the Luhansk Oblast border.[14] Russian forces also reportedly conducted reconnaissance-in-force operations in the Vasylivka-Berestove direction and attempted unsuccessful offensive operations west of Mykolaivka and Vovchoyarivka.[15] Russian Telegram channel Rybar posted footage reportedly captured by Wagner Group units in Klynove (approximately 12km southeast of Bakhmut) that would indicate that Russian forces are attempting to secure positions along the E40 Slovyansk-Bakhmut highway, although ISW is unable to verify the footage.[16] 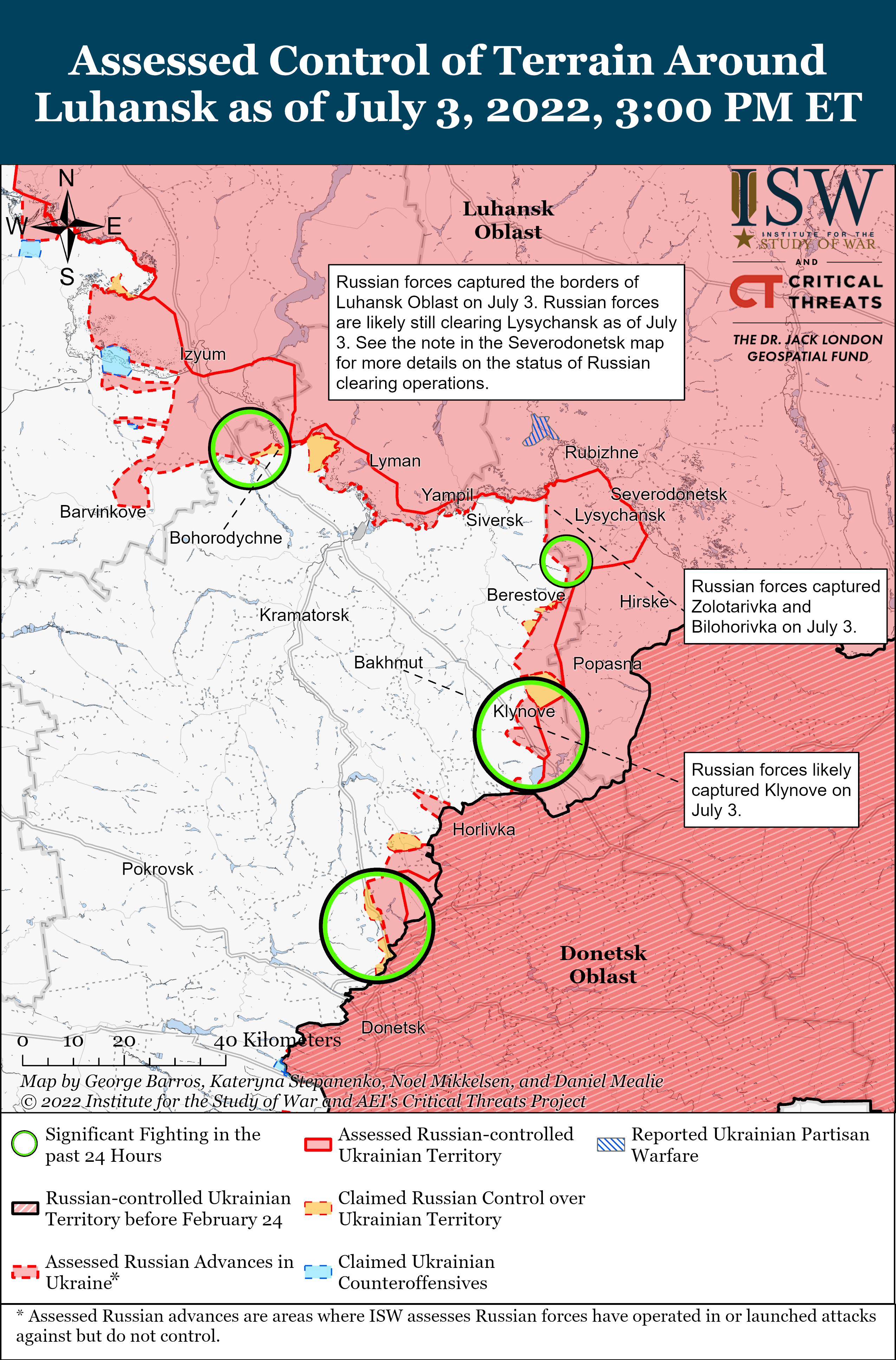 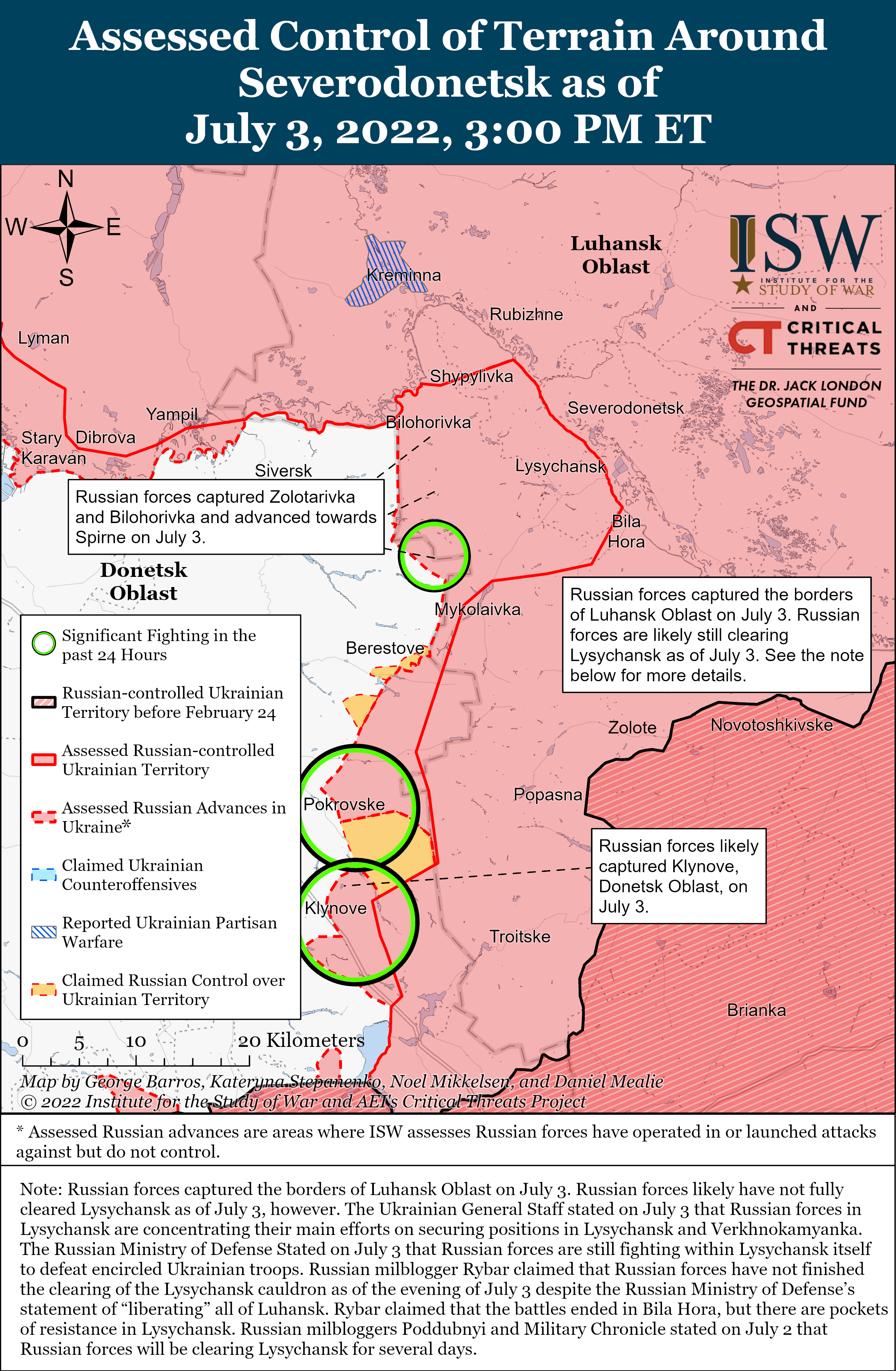 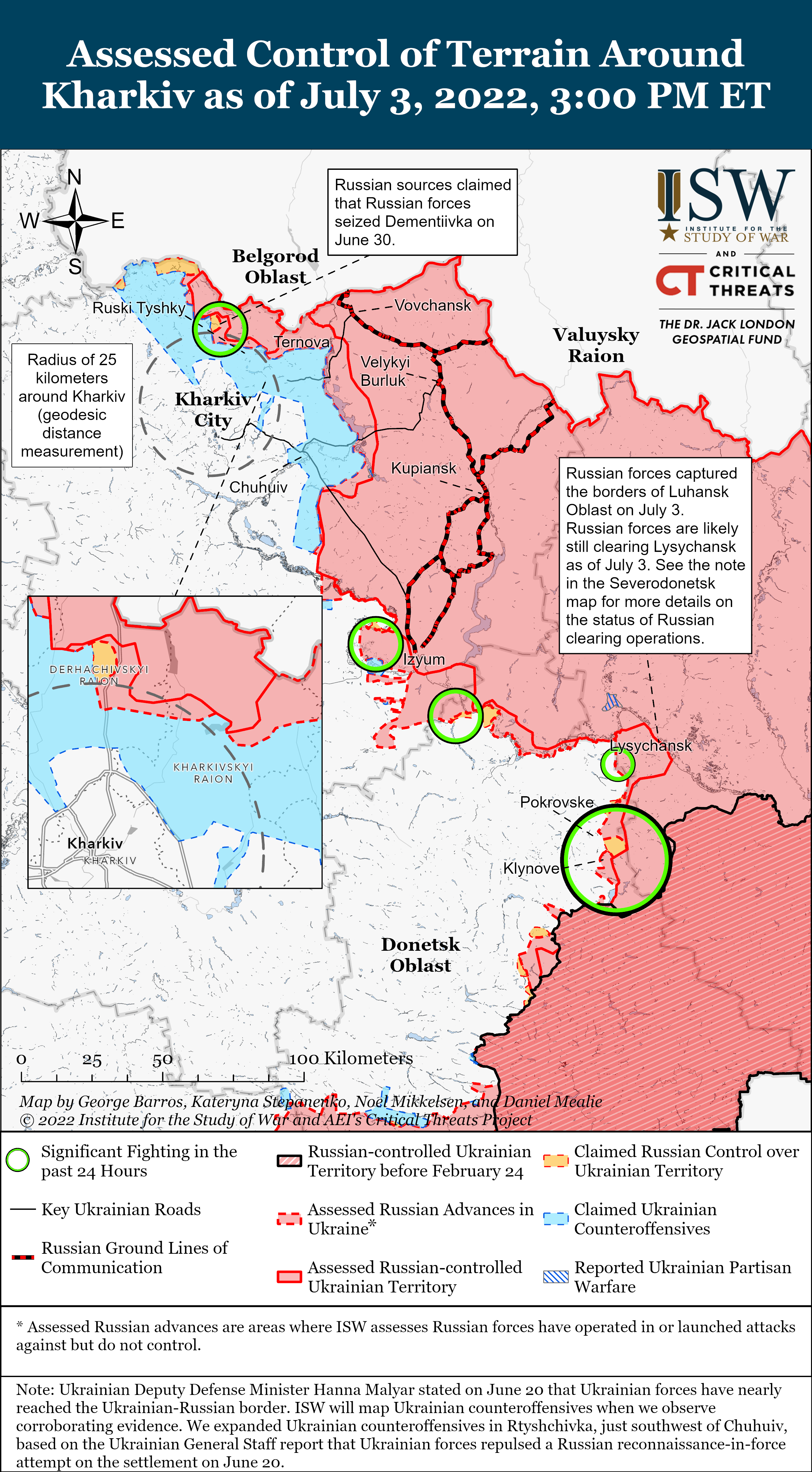 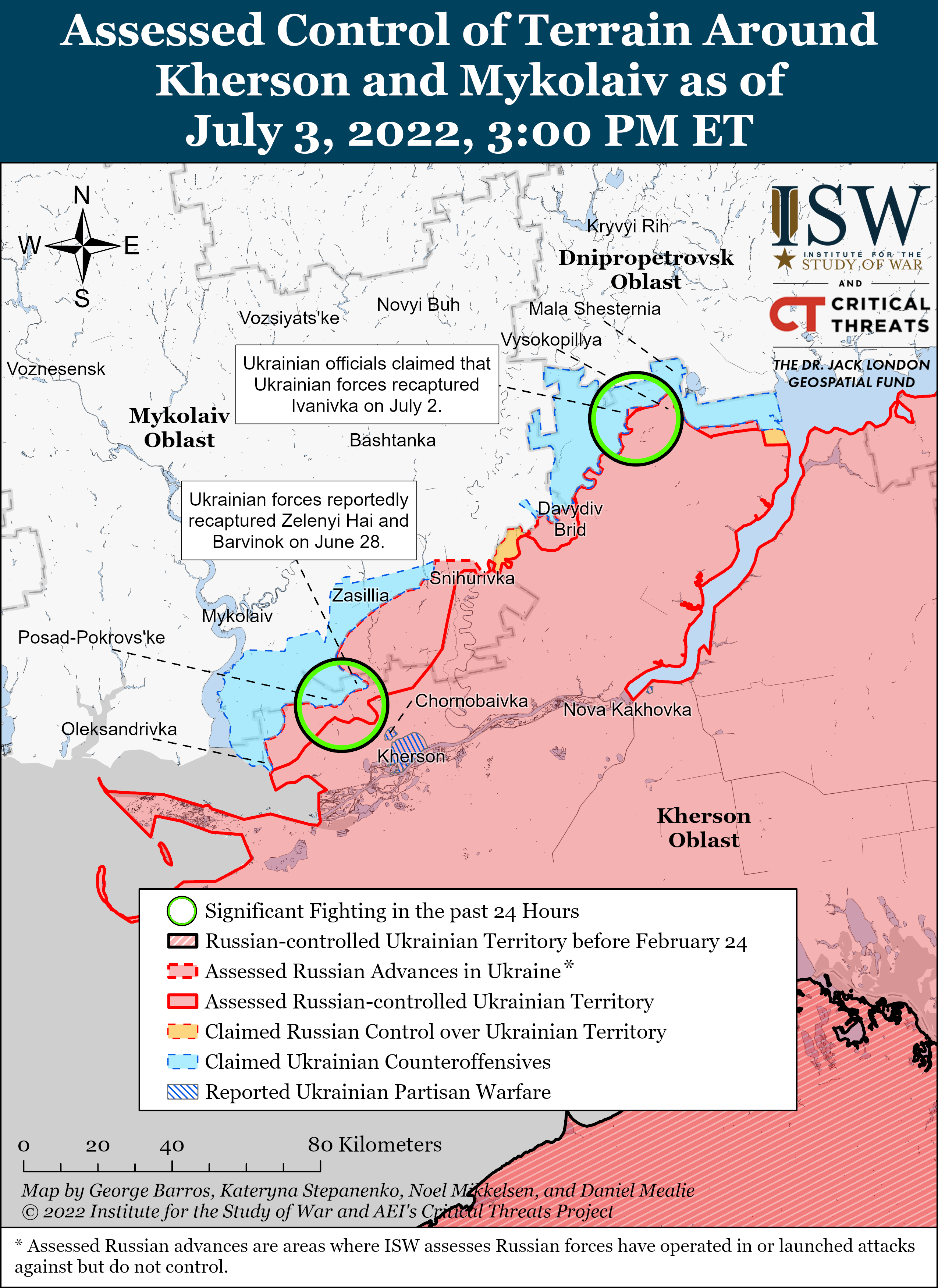 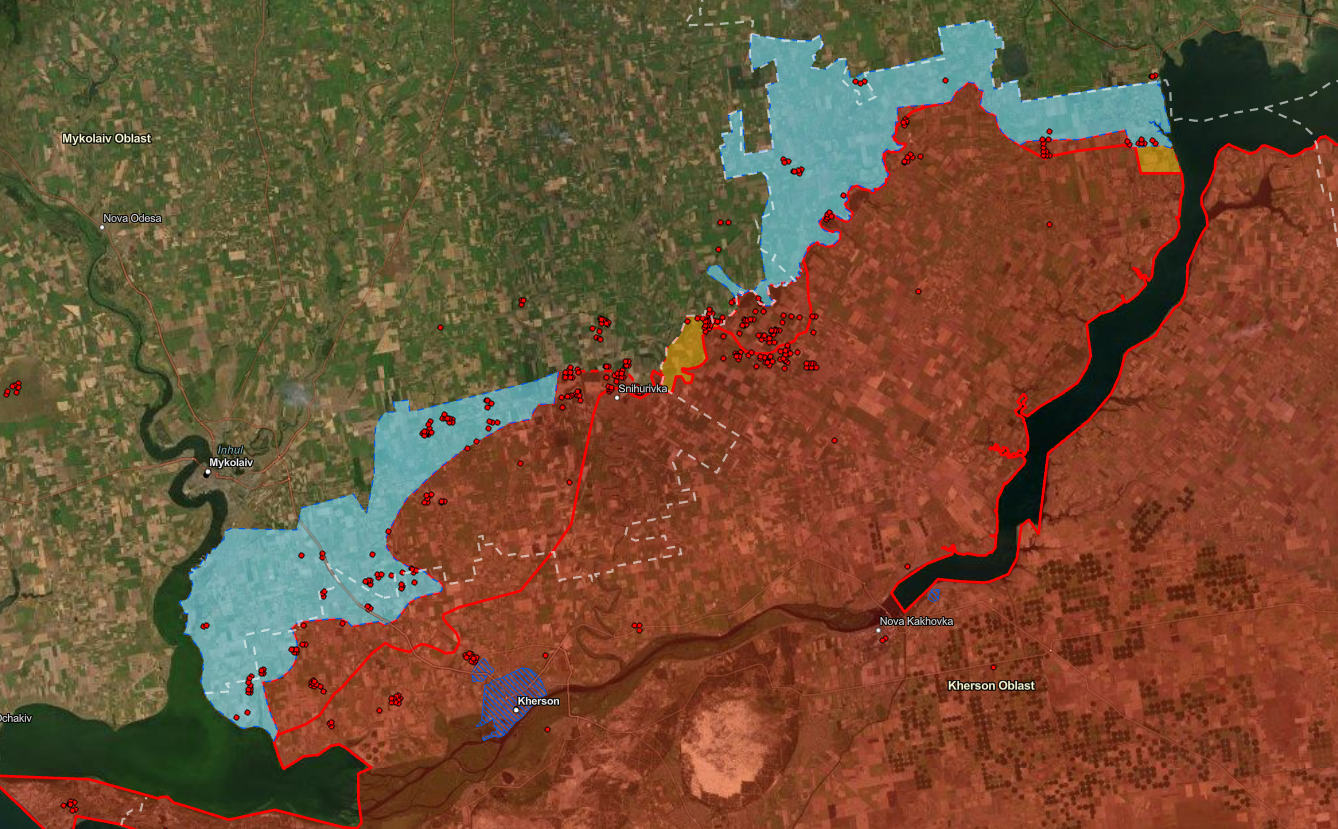 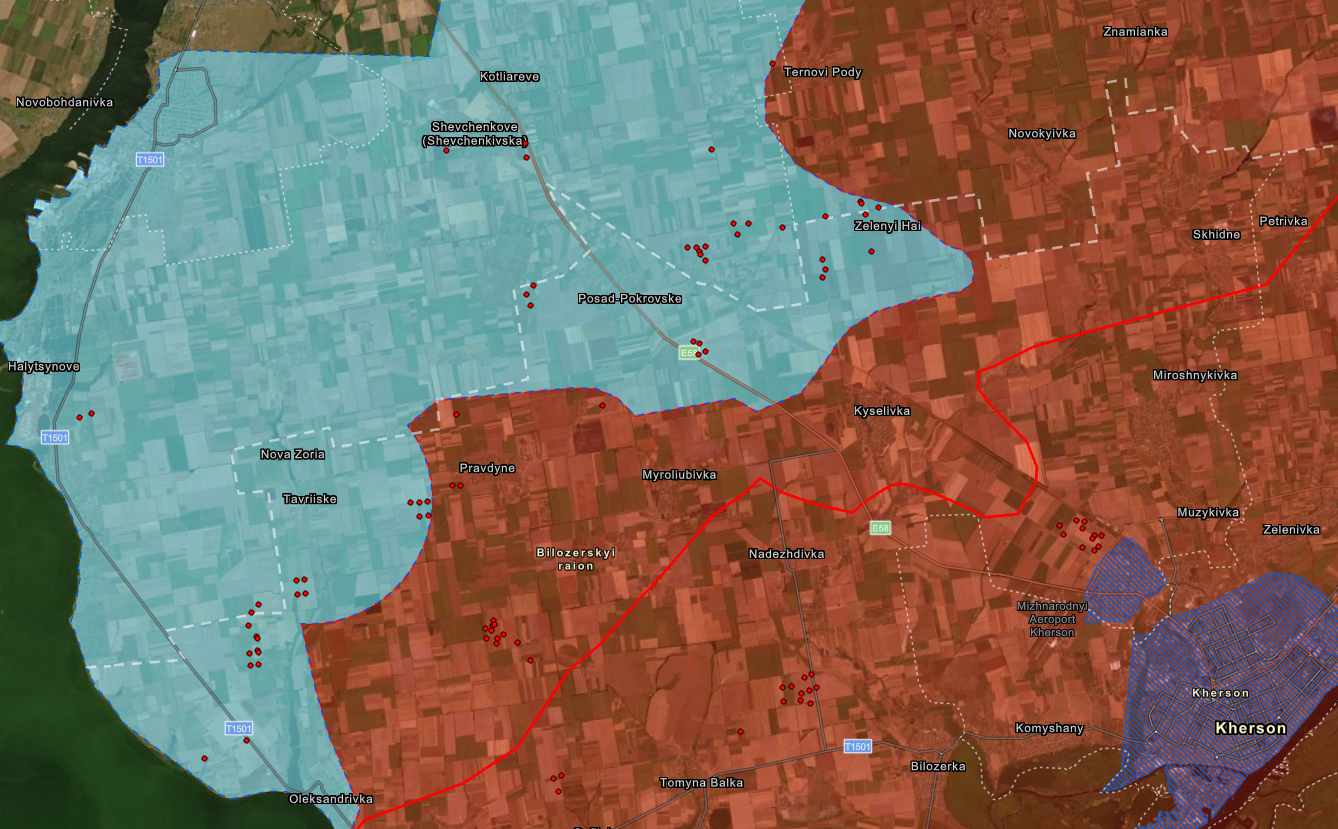 Ukrainian partisans reportedly derailed a Russian armored train carrying ammunition near Melitopol on July 2.[33] Kremlin-sponsored outlet RIA Novosti acknowledged that the train derailed around Yakymivka, but claimed that the incident was an accident.[34] Ukrainian partisans previously targeted Russian armored trains and locomotives in Melitopol in late April and mid-May.[35]