Russian forces conducted a massive missile strike against the Schevchenkivskyi district of Kyiv on June 26, likely to coincide with the ongoing summit of G7 leaders.[1] This is the first such major strike on Kyiv since late April and is likely a direct response to Western leaders discussing aid to Ukraine at the ongoing G7 summit, much like the previous strikes on April 29 during UN Secretary-General Antonio Guterres’ visit to Kyiv.[2] Ukrainian government sources reported that Russian forces targeted infrastructure in the Shevchenkivskyi district using X101 missiles fired from Tu-95 and Tu-160 bombers over the Caspian Sea and noted the Russian attack was an attempt to “show off” their capabilities.[3] Open-source Twitter account GeoConfirmed stated that the strikes targeted the general vicinity of the Artem State Joint-Stock Holding Company, a manufacturer of air-to-air missiles, automated air-guided missile training and maintenance systems, anti-tank guided missiles, and aircraft equipment.[4] GeoConfirmed noted that Russian forces likely fired the missiles from the maximum possible range, which would have interfered with GPS and radar correlation and resulted in the strike hitting civilian infrastructure, and additionally hypothesized some of the missiles may have been fired from Russian-occupied southern Ukraine.[5] Russian forces likely targeted the Artem Plant as a means of posturing against Western military aid to Ukraine during the G7 summit and inflicted additional secondary damage to residential infrastructure.[6]

The Kremlin continues to manipulate Russian legislation to carry out “covert mobilization” to support operations in Ukraine without conducting full mobilization. The Russian State Duma announced plans to review an amendment to the law on military service on June 28 that would allow military officials to offer contracts to young men immediately upon “coming of age” or graduating high school, thus circumventing the need to complete military service as conscripts.[7] Head of the Ukrainian Main Intelligence Directorate (GUR) Kyrylo Budanov stated on June 25 that the Kremlin is carrying out “covert mobilization” and that due to continuous Russian mobilization efforts, Ukrainian forces cannot wait for the Russians to exhaust their offensive potential before launching counteroffensives.[8] Budanov remarked that the Kremlin has already committed 330,000 personnel to the war, which constitutes over a third of the entirety of the Russian Armed Forces, and that Russian President Vladimir Putin will face substantial domestic and social opposition if he increases this number by carrying out general (as opposed to covert) mobilization, as ISW has previously assessed.

Colonel-General Genady Zhidko, current director of Russia’s Military-Political Directorate, is likely in overall command of Russian forces in Ukraine. Zhidko sat next to and conferred with Russian Defense Minister Sergey Shoigu during an inspection of Russian ground forces in Ukraine on June 26, though Zhidko’s nameplate was notably blurred out by the Russian Ministry of Defense and his position has not been officially confirmed, unlike the commanders of Russia's two force groupings in Ukraine that ISW reported on June 26.[9] Conflict Intelligence Team previously reported on May 26 that Zhidko replaced Commander of the Southern Military District Alexander Dvornikov as overall commander in Ukraine, though ISW could not independently verify this change at the time.[10] Reports on June 21 of Dvornikov’s dismissal and Zhidko’s prominent place in Shoigu’s June 26 visit likely confirm this change. 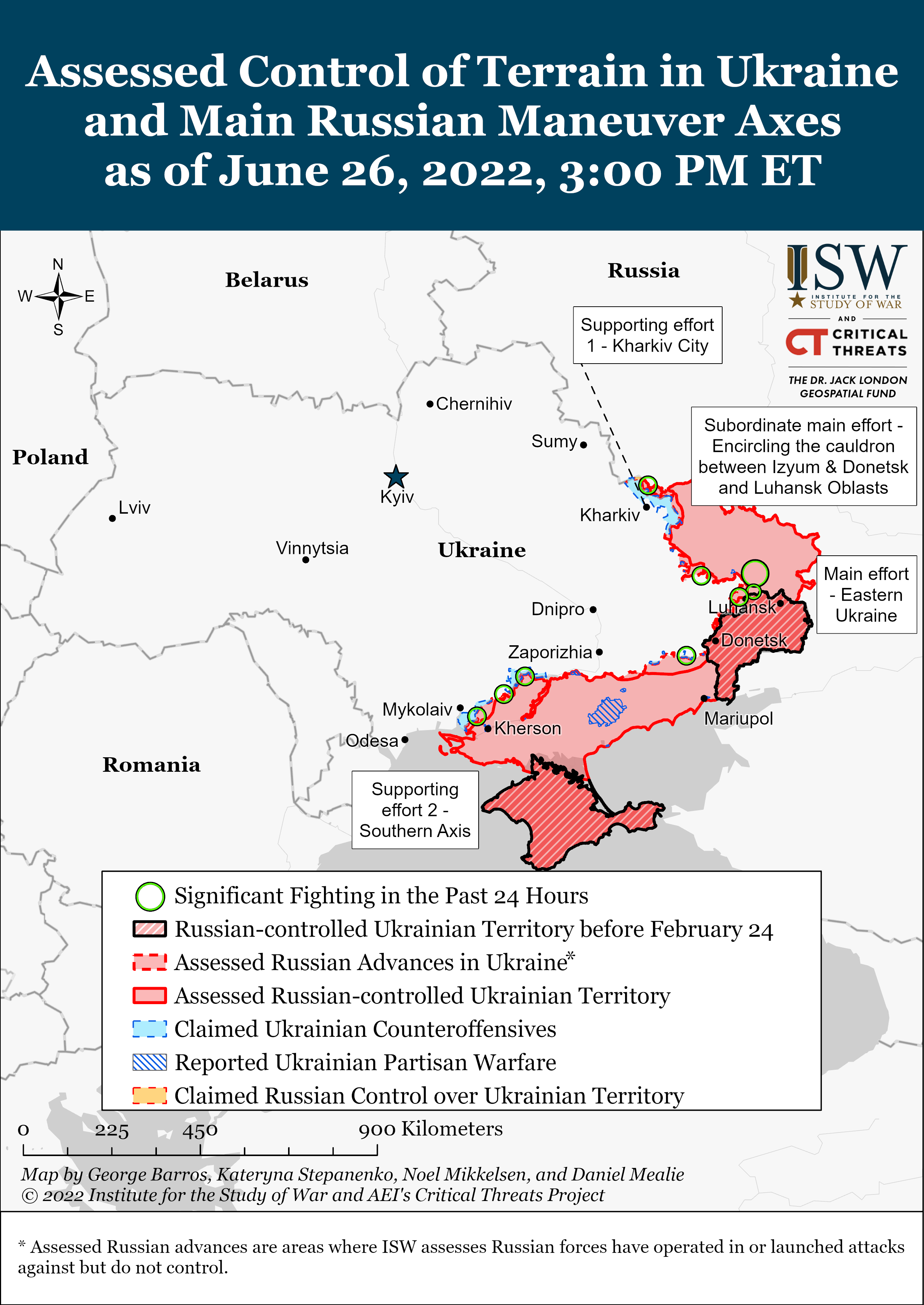 Main Effort—Eastern Ukraine
Subordinate Main Effort—Southern Kharkiv, Donetsk, Luhansk Oblasts (Russian objective: Encircle Ukrainian forces in Eastern Ukraine and capture the entirety of Donetsk and Luhansk oblasts, the claimed territory of Russia’s proxies in Donbas)
Russian forces continued to conduct attacks against the southern outskirts of Lysychansk on June 26. Russian sources claimed that Russian troops are fighting on the territory of the Lysychansk Gelatin Plant, as well as in Bila Hora (directly southeast of Lysychansk) and Privillya (directly northwest of Lysychansk).[11] Russian troops additionally consolidated newly-controlled positions in Severodonetsk, Syrotyne, Voronove, and Borivske and continued to shell Ukrainian forces in and around the Severodonetsk-Lysychansk area.[12] Information regarding the specifics of the tactical situation in Lysychansk will likely become increasingly obfuscated as Russian forces consolidate control of Severodonetsk and continue to extend advances into Lysychansk. 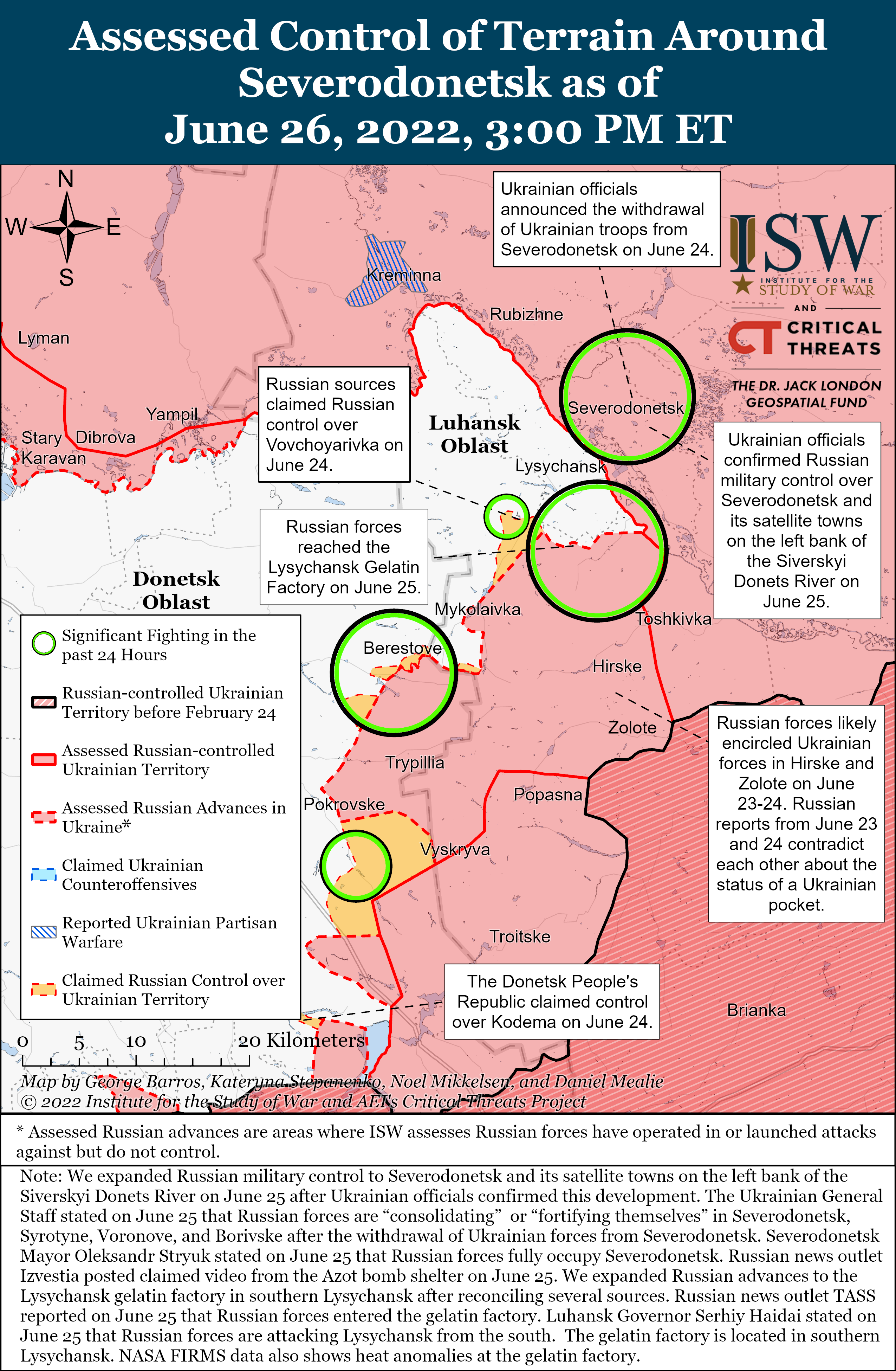 Russian forces continued offensive operations to the east of Bakhmut along the T1302 Bakhmut-Lysychansk highway on June 26.[13] Russian Telegram channel Rybar claimed that Russian forces have established control of the T1302 highway and that Russian operations in this area will likely be increasingly oriented around retaining control of the highway as opposed to interdicting Ukrainian lines of communication.[14] Russian forces fired at Ukrainian positions along the T1302 in Mykolaivka, Berestove, Pokrovske, and Kodema and reportedly conducted ground assaults near Berestove, Bilohorivka, Klynove, and Pokrovkse.[15] Russian sources additionally claimed that Russian troops conducted positional battles around Donetsk City in the direction of Kostyantinivka and Niu York, although Ukrainian sources stated that Russian forces took no active actions in this area.[16] Russian forces conducted ground and artillery attacks in southwestern Donetsk Oblast near the Zaporizhia Oblast border in the vicinity of Pavlivka and Yehorivka.[17] 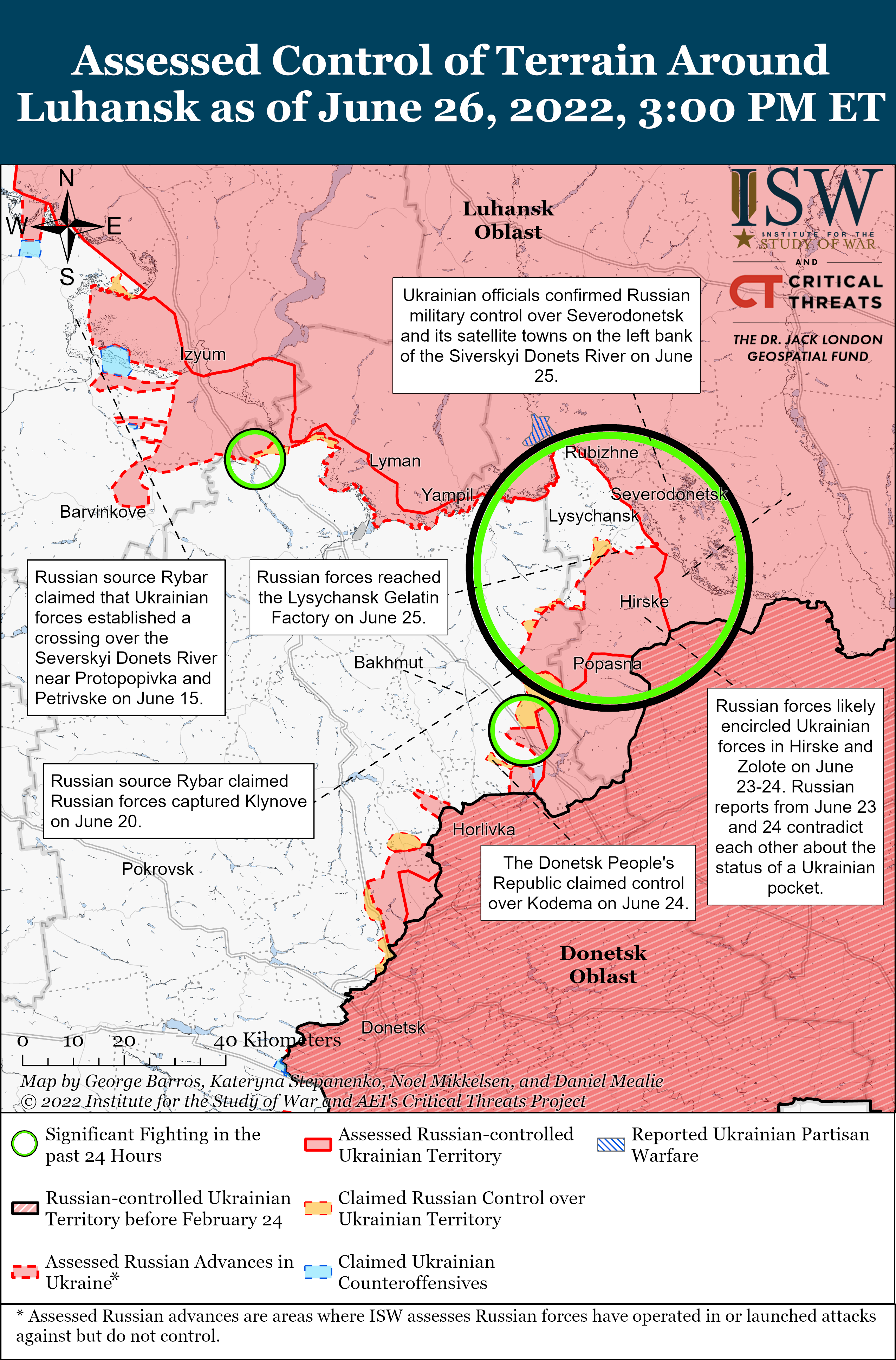 Russian forces continued ground assaults towards Slovyansk from the southeast of Izyum but did not make any confirmed advances on June 26. The Ukrainian General Staff reported that Ukrainian forces repelled Russian attempts to advance in Dolyna, Kurulka, and Mazanivka, all northwest of Slovyansk near the Kharkiv-Donetsk Oblast border.[18] Russian Telegram channel Readkova additionally claimed that Russian troops are fighting around Krasnopillya and Bohorodychne (northwest of Slovyansk) and Prysyhb and Sydorove (directly north of Slovyansk).[19] Russian forces continued to set conditions to resume operations towards Slovyansk from the west of Lyman and shelled Mayaky, about 15 kilometers directly north of Slovyansk.[20] 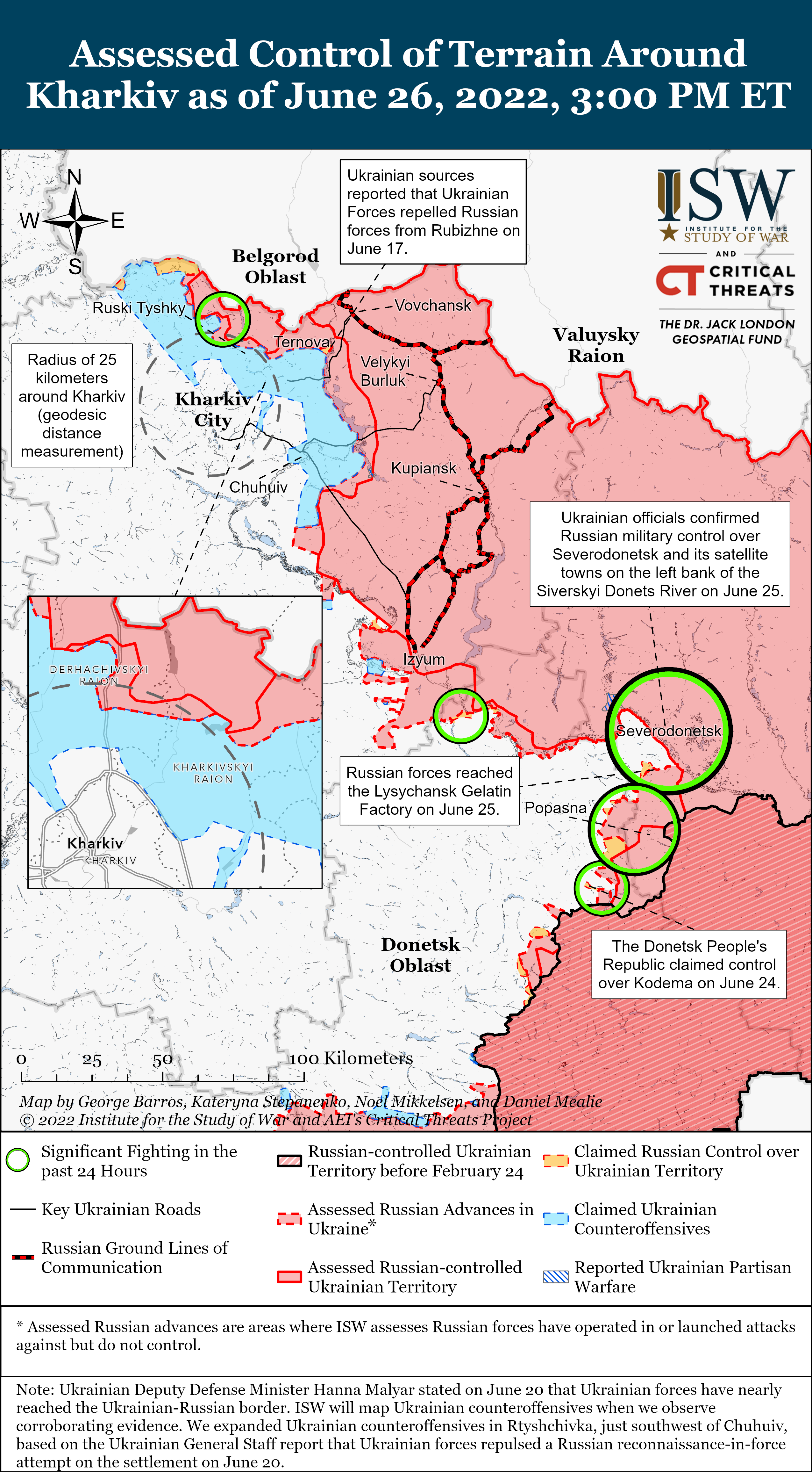 Russian forces on the Southern Axis continued defensive operations and targeted Ukrainian positions on June 26.[25] The Ukrainian General Staff and Ukraine’s Southern Operational Command both indicated that Russian forces are focusing on preventing Ukrainian troops from regrouping along their southern frontlines.[26] Russian forces once again unsuccessfully attempted to regain a lost position in Potomkyne, in northwestern Kherson Oblast.[27] Russian forces are intensifying artillery attacks against Ukrainian positions, especially along the Kherson-Mykolaiv Oblast border on the western Inhulets riverbank, to repel recent Ukrainian counterattacks. Ukraine’s Southern Operational Command stated that Russian forces have intensified their rate of shelling by 150% and that Russian shelling has almost entirely destroyed the settlements in the Davydiv Brid area along the eastern bank of the Inhulets River.[28] Russian forces conducted artillery and missile strikes across the southern frontline in various areas of Zaporizhia, Kherson, Mykolaiv, and Dnipropetrovsk Oblasts.[29] Russian forces are additionally continuing to fortify their military presence on Snake Island off the coast of Odesa Oblast to extend their control of the southwestern Black Sea.[30] 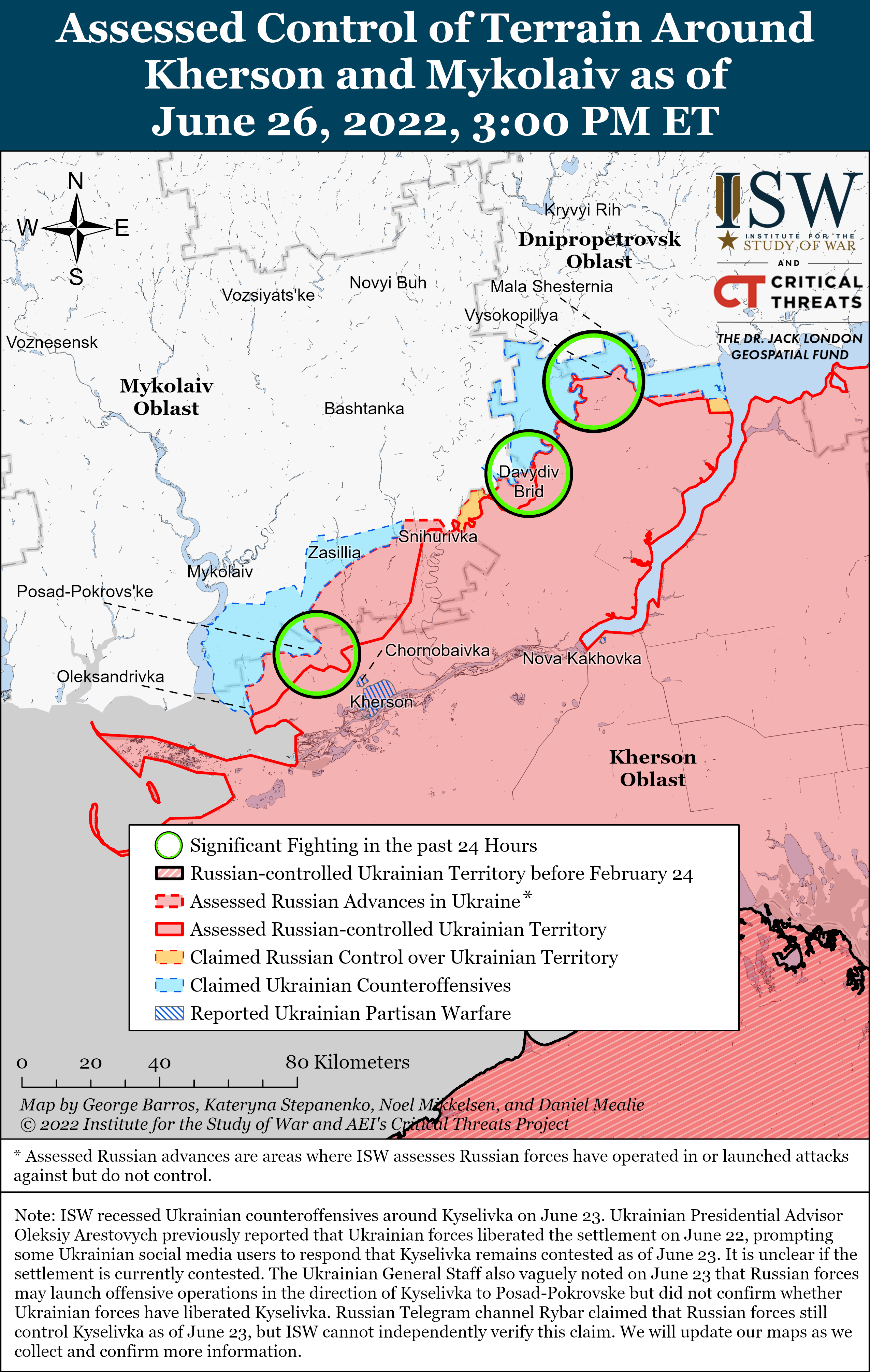 Russian occupation authorities are strengthening measures to consolidate administrative control of occupied areas to crack down on the increasing pressure of recent Ukrainian partisan activities. The Ukrainian General Staff reported on June 26 that Russian authorities have intensified filtration measures at checkpoints in occupied areas and are carrying out counterintelligence actions at these checkpoints, likely to identify and target Ukrainian partisans.[31] Ukraine’s Southern Operational Command additionally claimed that Russian forces are abducting relatives of Ukrainian soldiers and servicemen in Mykolaiv and Kherson Oblasts.[32] Ukrainian Mayor of Enerhodar Dmytro Orlov similarly stated that Russian forces in Enerhodar are kidnapping and torturing citizens to obtain information on “illegal activity” (presumably partisan affiliations) under duress.[33] Reports of abductions and intensified law enforcement measures on the part of Russian authorities coincide with reports of escalating Ukrainian partisan actions. Ukraine’s Southern Operational command stated that members of Ukrainian resistance in Kherson Oblast are increasingly targeting pro-Russian collaborators, and Ukrainian partisans set a car belonging to the Russian-appointed Head of Education on fire on June 25.[34]