Russian forces are concentrating in the eastern, northwestern, and western outskirts of Kyiv for an assault on the capital in the coming 24-96 hours. The Russians are bringing up supplies and reinforcements as well as conducting artillery, air, and missile attacks to weaken defenses and intimidate defenders in advance of such an assault. It is too soon to gauge the likely effectiveness of any Russian attempt to complete the encirclement of Kyiv or to seize the city at this time. If Russian troops have been able to resupply, reorganize, and plan deliberate and coordinated simultaneous operations along the several axes of advance around and into the capital, they may be more successful in this operation than they have in previous undertakings. Operations near Kyiv in the past 72 hours have not offered enough evidence to evaluate that likelihood.

Russian troops in southern Ukraine continue to divide their efforts between attacks westward toward Mykolayiv and Odesa, attacks northward toward Zaporizhya, and attacks eastward toward Mariupol and Donbas. Failure to focus on any single line of advance has likely hindered Russian operations and will probably continue to do so. Russian troops in Kherson Oblast appear to be feeling their way around Mykolayiv, likely seeking to find a route across the Southern Bug River that would allow them to bypass Mykolayiv itself and resume their advance on Odesa. Those heading toward Zaporizhya currently lack the combat power likely necessary to encircle or take that large city. They could, however, set conditions for successful operations against Zaporizhya once reinforcements arrive following the fall of Mariupol and the opening of a wide land route westward from Donbas. 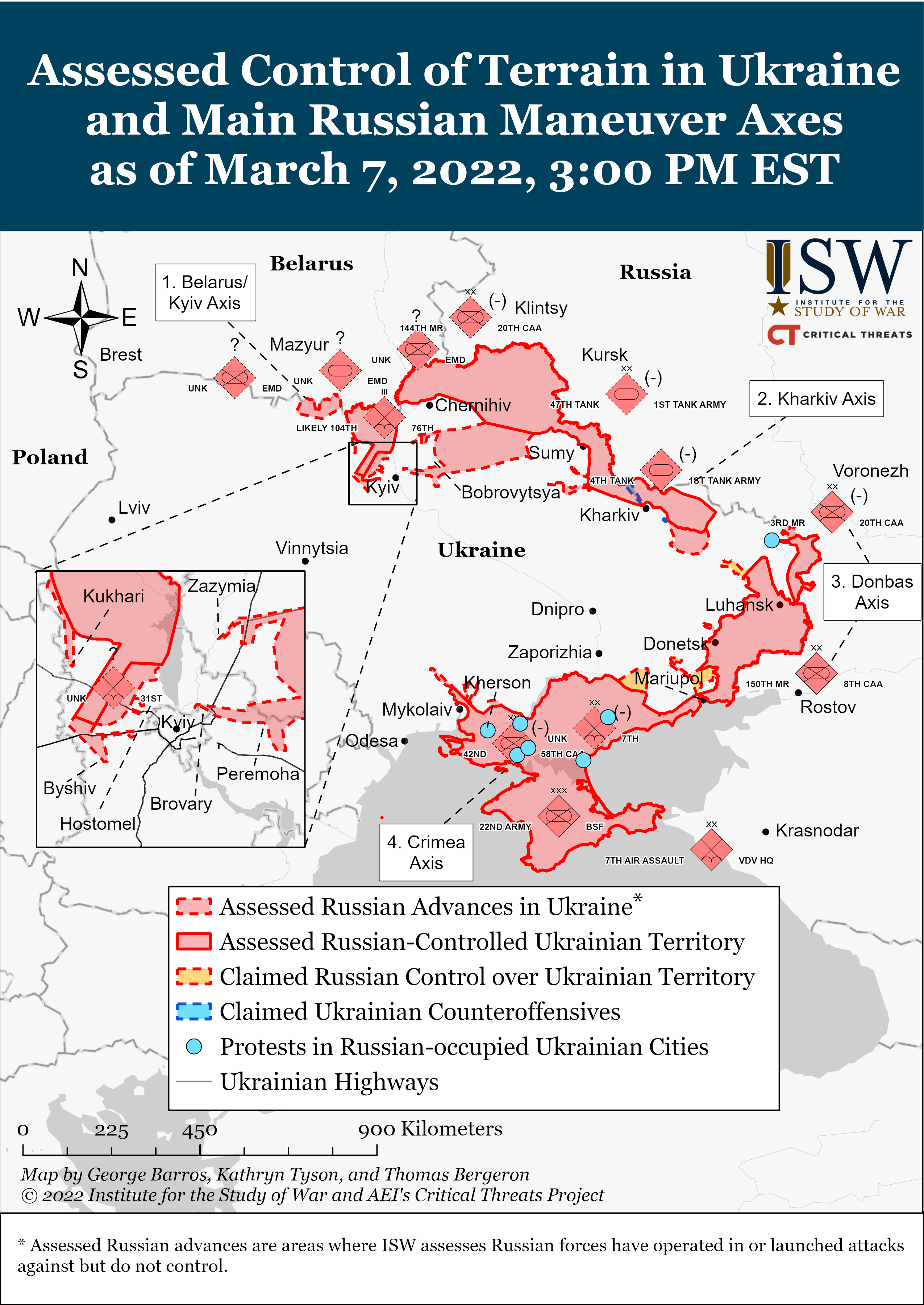 Main effort—Kyiv axis: Russian operations on the Kyiv axis consist of a main effort aimed at encircling the city from the northwest, west, east.

Russian forces are likely completing preparations for an assault to seize Kyiv from the east and west within the next 24-96 hours. The Russians are setting conditions for the attack by concentrating supplies and reinforcements, attempting to advance and stabilize their lines, and attacking the city with air, artillery, and missile fire likely intended both to demoralize and to damage Kyiv’s defenders. The Ukrainian General Staff reported on March 6 that the Russians have started accumulating the resources they would need to storm the capital.[1] The General Staff noted that Ukrainian forces retain a coherent defense of the city at this time.[2]

Russian forces have continued their efforts to secure control of the town of Irpin, approximately 20 kilometers west-northwest of the center of Kyiv, as well as the town of Bucha, about 4 kilometers north of Irpin, in the last 24 hours.[3] The Ukrainian General Staff reported on March 6 that Russian tank and motorized infantry columns are operating in the Irpin area.[4] Social media reports and reports from the ground support this assessment.[5] The Russians are reportedly using a siege-and-starve approach in Irpin similar to activities they conducted in Syria in order to compel Irpin to surrender. The Ukrainian General Staff reported on March 7 that the Russians have denied the inhabitants of Irpin water, heating, and food supplies for three days and are not allowing them to leave.[6] Social media users reported damage from Russian rocket attacks on civilian infrastructure in Irpin on March 7.[7] The Ukrainian General Staff also reported that Russian elements under the command of Chechen leader Ramazan Kadyrov were shelling civilian targets on March 7 in the town of Myla, roughly 7.5 kilometers southwest of Irpin.[8] These reports are all consistent with previously-observed Russian efforts to consolidate control of this critical area to facilitate further advances south and southeast to encircle Kyiv and/or to launch attacks directly against central Kyiv itself. Continued Russian fighting and shelling in this area in the last 24 hours could indicate that conditions are not yet set on the northwestern axis for Russian forces to launch the ground attack directly against Kyiv within the next 24 hours, but ISW does not have sufficient evidence to rule out the possibility that they might do so.

The Ukrainian General Staff reported on March 7 that Russian forces are concentrating elements of the 41st Combined Arms Army near the southern outskirts of Chernihiv and intend to encircle and presumably seize the town.[9] It had previously reported its assessment that Russian troops intend to seize Chernihiv city on March 6.[10] Social media reports from March 6 of Russian weapons systems near Chernihiv may support this assessment.[11] Major Russian combat operations against Chernihiv city have not been reported as of this publication.

Russian troops are establishing themselves in Kyiv’s eastern outskirts as of March 7. The Ukrainian General Staff reported a successful March 6 attack against a Russian weapons depot in Nova Basan, roughly 70 kilometers east-northeast of Kyiv’s center.[12] That depot was likely supporting Russian operations reported in our previous updates on the axis from Brovary toward Boryspil airport. Social media reports of Russian multiple-launch rocket system (MLRS) units firing on Kyiv from the vicinity of Peremoha, near Brovary and about 23 kilometers from central Kyiv, support assessments that Russian troops are conducting fire attacks to set conditions for further ground operations in the eastern Kyiv outskirts.

ISW has previously assessed that Russian forces in and around Brovary likely came from the Sumy axis and continue to be supported along the roads stretching east through Sumy to Russia. The Russians face challenges sustaining such a long logistics line, particularly since they have not yet captured Sumy itself and Ukrainian forces continue to conduct attacks along the route. The Ukrainian General Staff assessed on March 6 that Russian forces are focused on encircling Sumy (and other cities).[13] It reported on March 7 that Russian troops are preparing to attack Sumy.[14] It noted on March 7 that Russian forces near Okhtyrka, about 68 kilometers south of Sumy and 100 kilometers west-northwest of Kharkiv, had taken 50 percent losses and had to regroup and resupply.[15] The Ukrainian General Staff offered the same assessment of Russian forces in Konotop, roughly 120 kilometers west-northwest of Sumy. The Ukrainian General Staff also reported a March 6 attack on a Russian weapons depot near Skrypali, about 81 kilometers west of Sumy along the road via Priluky and Brovary to Kyiv.[16] These continued Ukrainian attacks against Russian logistical positions along this extended line of advance may delay or disrupt Russian efforts to launch a ground offensive against Kyiv itself from the east.

The Russians have reportedly not yet secured the entire stretch of a critical road along this axis, moreover, as social media reports indicate that Ukrainian forces still control the important town of Romny and Ukrainian media notes that the town of Lebedyn is also still under Ukrainian control.[17] The Russians may feel it necessary to finish securing their ground lines of communication to eastern Kyiv before attempting to take the capital. If they do not do so, they risk disruptions and challenges during the climactic battle of the campaign.

Russian forces have continued to attack Kharkiv by air and ground fires but have not renewed a ground offensive attack on the city. The Ukrainian General Staff assesses that the Russians will attempt to encircle Kharkiv, but ISW has observed no indicators of imminent Russian operations along those lines. Numerous social media reports from March 6 and 7 show the effects of Russian bombardments in and around Kharkiv, indicating that Russian attacks are indiscriminate.[18] Ukrainian forces continue to report on losses they have inflicted on Russian troops, especially senior officers killed in the fighting.[19]

Social media reports indicate that Ukrainian forces conducted a counterattack on March 6 against Russian forces operating near Severodonetsk, as well as on an explosion and fire at an oil depot in Luhansk.[20] Russian forces do not appear to have made significant gains on this axis in the past 24 hours.

Russian forces continued their encirclement of Mariupol and have increased efforts to break into the city as well as to drive on Volnovakha, roughly 56 kilometers north of Mariupol, from the east and the west. The Ukrainian General Staff reported on indecisive fighting roughly 50 kilometers west of Volnovakha around Lubymivka, which the Russians reportedly hold.[21] The Ukrainian General Staff report suggests that Russian efforts to reach Volnovakha from the east are having more success, although they have not yet succeeded.[22] Russian troops also attempted to enter the neighborhood of Staryi Krim, northwest of Mariupol, on March 7, but were repulsed according to the Ukrainian General Staff. Social media posts testify to the intensity of combat in and around Mariupol.[23]

Russian forces operating north of Crimea appear to continue to divide their efforts into penny-packets along multiple axes of advance. The Ukrainian General Staff reports that of the 17 battalion tactical groups (BTGs) operating in the vicinity of Kherson two are focused on Mykolayiv, two are driving up the Southern Bug toward Vosnesensk, one is allocated to an advance on Odesa at some point (but has not likely begun that advance), four are operating northward toward Zaporizhya, and three are supporting the Mariupol effort.[24] Social media reports showed Russian armored vehicles moving through Heniches’k, likely toward either Mariupol or Melitopol, on March 6.[25] Roughly 49 Russian helicopters were spotted at Kherson Airbase on March 6.[26]

Russian forces appear to be prioritizing operations north from Crimea toward Zaporizhya City itself. The Ukrainian General Staff reported on March 7 that Russian troops are restoring the airfield at Melitopol, roughly 110 kilometers south of Zaporizhya.[27] Its previous report had identified three Russian BTGs advancing north toward Zaporizhya.[28] Zaporizhya is a large city of nearly three-quarters of a million people. Russian troops are unlikely to be able to encircle or seize it with an attack on this scale if Ukrainians defend it as they have defended other threatened cities.

Russian troops are conducting intense shelling of Mykolayiv and nearby towns, likely to prepare for a ground assault on the city.[29] The Ukrainian General Staff reported that a Russian BTG crossed the Inhul River at Kashpero-Mykolaivka, roughly 50 kilometers north of Mykolayiv, on March 6.[30] This movement is consistent with expected Russian efforts to reach crossings of the Southern Bug north of Mykolayiv, as a fight to seize Mykolayiv and its bridge would likely delay the prepared Russian attack on Odesa for longer than the Russian General Staff would prefer.