The Russian military is likely trying to use mobilized personnel to restart the Donetsk offensive but will likely still fail to achieve operationally significant gains. Commander-in-Chief of the Ukrainian Armed Forces General Valerii Zaluzhnyi reported on November 4 that Russian forces have tripled the intensity of hostilities in certain sections of the front with up to 80 daily assaults.[1] The Ukrainian General Staff reported that Russian forces are currently focusing those offensive operations in the direction of Bakhmut, Avdiivka, and western Donetsk Oblast.[2] The Ukrainian Eastern Group of troops spokesperson Serhiy Cherevatyi stated on November 4 that Russian forces are likely trying to seize Bakhmut and Soledar in Donetsk Oblast so that Russia can declare some type of success by announcing the “liberation” of the Donbas (even though those gains would not give Russia control over the entire region).[3] Cherevatyi also noted the presence of mobilized men in the Bakhmut direction, an area that should not in principle see many mobilized personnel given the extensive presence in this area of Wagner Group and proxy units that should not be receiving large numbers of Russian reservists.[4] ISW previously assessed that Russian forces prematurely impaled an insufficient concentration of mobilized personnel on offensive pushes near Bakhmut and Vuhledar in Donetsk Oblast on November 3.[5] The apparent intensification of Russian assaults in Donetsk Oblast likely indicates that Russian forces are repeating that mistake throughout this section of the front. The increased quantity of personnel at frontline positions may allow Russian forces to achieve some gains in Donetsk Oblast, but poor training, logistics, and command will continue to prevent Russian forces from making operationally significant gains that would materially affect the course or outcome of the war.

Russian forces are setting conditions for a controlled withdrawal in northwestern Kherson Oblast, likely to avoid a disorderly rout from the right (west) bank of the Dnipro River. Russian forces will likely need to engage in a fighting withdrawal to prevent Ukrainian forces from chasing them onto the left (eastern) bank. Ukraine’s Southern Operational Command corrected social media reports from November 3 regarding the destruction of civilian boats and piers along the Dnipro River.[6] Ukraine’s Southern Operational Command stated that Russian forces are purposefully destroying civilian vessels and are restricting civilian use of watercraft and access to the shore. The corrected story likely corresponds with the reports of Russian forces preparing defensive positions on the left bank and the withdrawal of certain elements and suggests that Russian forces are eliminating ways for Ukrainian forces to chase them across the river during or after a withdrawal. Local Ukrainian sources also shared geolocated footage that reportedly showed the aftermath of the recent Russian destruction of a pedestrian bridge over the Inhulets River in Snihurivka (about 60km east of Mykolaiv City), which may also indicate Russian efforts to slow Ukrainian advances amidst a Russian withdrawal.[7]

Russian President Vladimir Putin is likely setting conditions to continue covert mobilization, which suggests that partial mobilization did not generate sufficient forces for Putin’s maximalist goals in Ukraine despite Putin’s claims to the contrary. Putin announced on November 4 that Russian forces mobilized 318,000 men of the 300,000 authorized due to the recruitment of volunteers during the mobilization period.[8] Putin added that Russia had already committed 49,000 men to combat missions. Putin’s claims of a successful and completed mobilization are inconsistent with his November 4 decree that allows Russian officials to mobilize citizens with outstanding convictions for some serious crimes.[9] Putin also signed decrees extending the status of servicemen to men serving in volunteer formations and outlining mobilization exemptions for citizens undergoing alternative service.[10] Such decrees likely indicate that Putin is preparing to continue covert mobilization in Russia by attempting to incentivize volunteer service or setting conditions to mobilize convicts—given that he has yet to sign an order terminating mobilization as of November 4.[11] Provisions authorizing the mobilization of prisoners may also indicate that Putin is trying to preempt social tensions by setting conditions to mobilize convicts instead of civilian Russian men.

Russian opposition and online outlets have reported that Russian authorities and businesses are preparing for a second mobilization wave by modernizing military recruitment centers and preparing lists of eligible men.[12] Rostov, Kursk, and Voronezh Oblast governors have also previously spoken about conducting a second wave of mobilization, and a few men reported receiving summonses for 2023.[13] While it is unclear if the Kremlin will double down on covert mobilization or initiate another mobilization wave, Putin’s decrees are indicative of the persistent force generation challenges that have plagued the Russian military campaign.

Russia’s costly force generation efforts will continue to weigh on the Russian economy and could ignite social tensions if the Kremlin does not fulfill its financial obligations to the participants of the “special military operation.” Putin signed a decree granting a one-time payment of 195,000 rubles (about $3,150) to mobilized men and individuals who had signed a contract after the declaration of partial mobilization on September 21.[14] By committing to pay mobilized men and giving the status of servicemen to volunteers the Kremlin is adding another financial burden to Russia’s economy.[15] Russian governors are already releasing statements attempting to justify delays in compensating mobilized men and their families citing budget issues and the need to finance supplies for Russian servicemen.[16] Failures to make payouts to mobilized men are already causing social tensions in Chuvash Republic, for example, where 1,800 men are demanding that the region immediately pay the promised 400 million rubles (about $6.5 million) to the mobilized population.[17]

Iran is likely already exploiting Russian reliance on Iranian-made weapons systems to request Russian assistance with its nuclear program. CNN reported on November 4 that unspecified US intelligence officials believe that Iranian officials have been asking Russia for help in acquiring additional nuclear materials and with nuclear fuel fabrication.[18] Nuclear fuel could allow Iran to shorten the breakout period to create a nuclear weapon depending on the kind of fuel and the kind of reactor for which it is being requested. CNN reported that it was unclear whether Russian officials had agreed to Iranian requests.[19] ISW has previously reported that Iranian plans to send more combat drones and possibly ballistic missile systems to Russia will likely strengthen Russia’s growing reliance on Iranian-made weapons systems.[20]

Ukrainian Main Military Intelligence Directorate (GUR) representative Andriy Yusov stated on November 4 that GUR has not received information confirming that Iranian missile systems have arrived in Russia despite intelligence that confirms the contract for the transfer of those systems.[21] Yusov also stated that another shipment of 200 Iranian-made combat drones to Russia is currently underway.[22] Ukrainian Minister of Defense Oleksii Reznikov reported on November 4 that Russian forces have almost completely used up the first set of 300 combat drones from Iran.[23] Reznikov reported that Russia currently has contracts to receive 1,500 to 2,400 more Iranian-made combat drones, assuming Iran can fill the orders.[24] Russia’s growing reliance on these systems allows Iran to exert greater influence on Russian officials, and Iranian officials have already likely started to exploit that influence in support of its nuclear program. The Iranian requests for Russian assistance with its nuclear program may be an indicator of an intensifying Russian Iranian security partnership in which Iran and Russia are more equal partners.

Russian forces may be deploying extreme measures against deserting personnel in an attempt to respond to severe morale issues. The United Kingdom Ministry of Defense (MoD) reported on November 4 that Russian forces in Ukraine probably have started deploying “barrier troops” and “blocking units”, units that threaten to shoot their own retreating personnel to compel offensives.[25] The UK MoD reported that Russian generals likely want their subordinate commanders to shoot deserters, including possibly authorizing personnel to shoot to kill their own deserting servicemen.[26] Desertion in the face of the enemy is a capital offense in many militaries, including America’s.[27] The deployment of designated units or individuals behind friendly lines to shoot deserters is nevertheless indicative of just how low the morale, discipline, and cohesion of Russian military forces in parts of Ukraine have become. 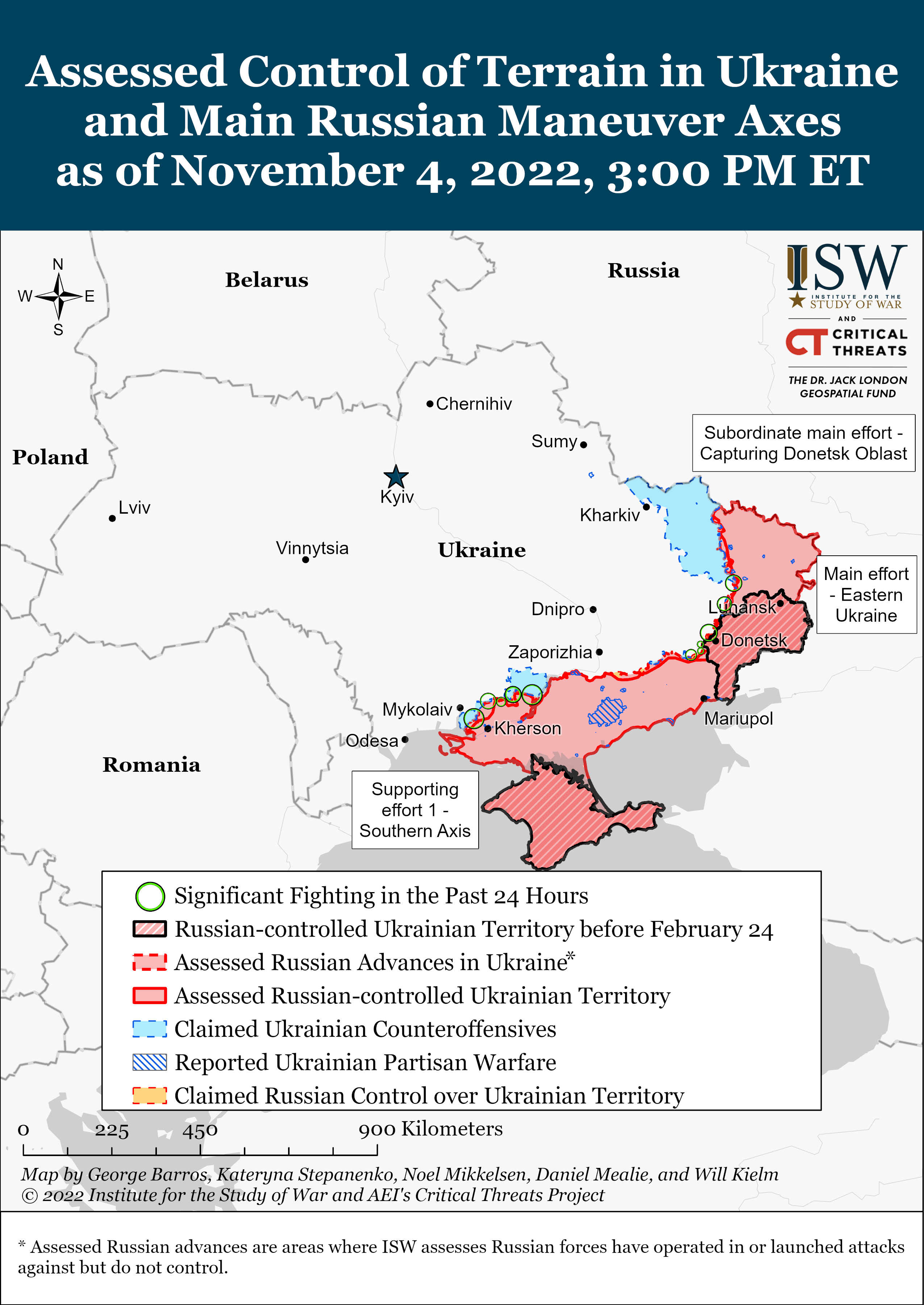 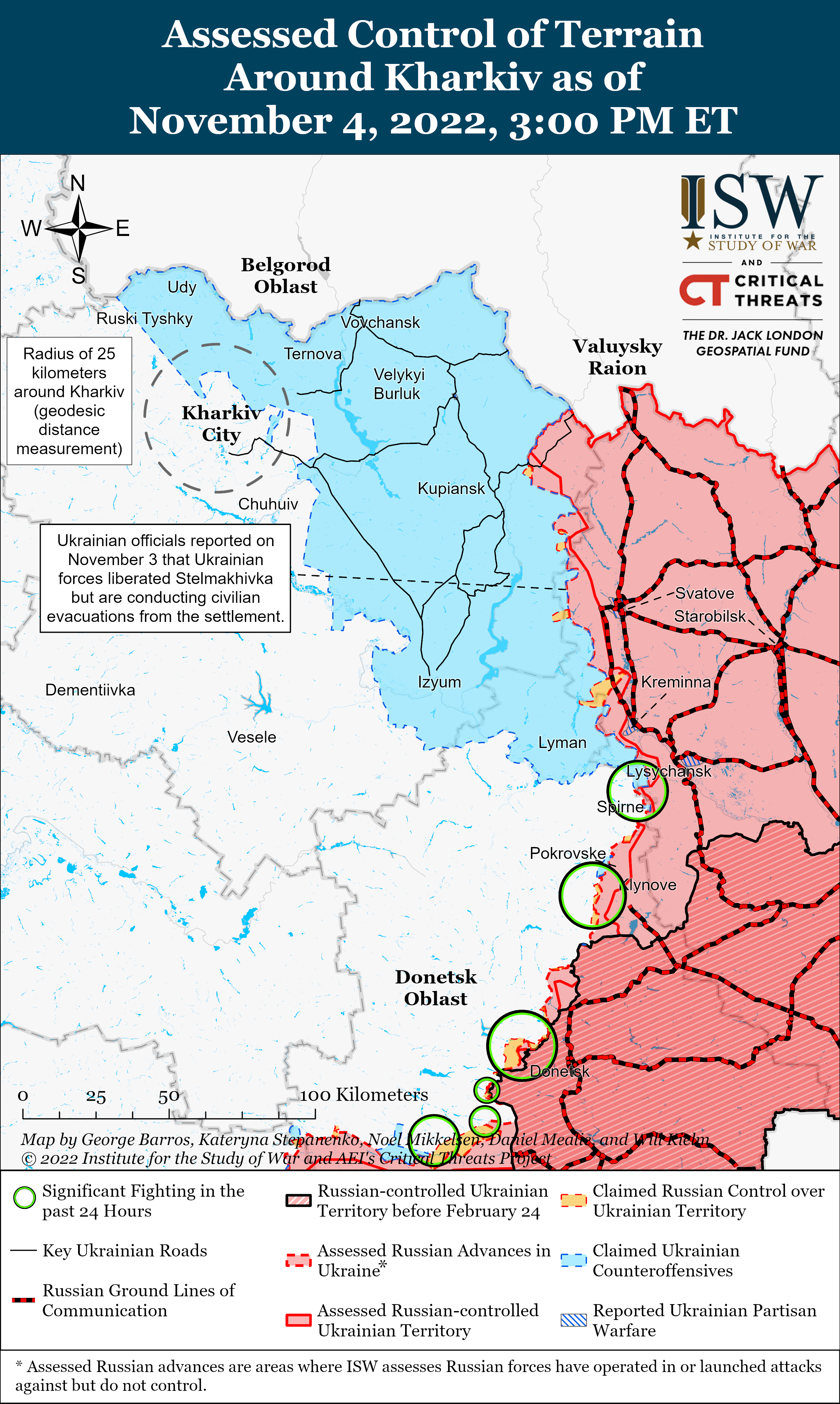 Ukrainian and Russian sources did not report significant changes to the situation on the northern and northwestern Kherson Oblast borders as of November 4. Ukraine’s Southern Operational Command stated that Russian forces continued to use aviation to strike Ukrainian positions, and Russian artillery units continued to shell newly liberated settlements along the line of contact.[39] Ukrainian forces also published a video of a raised Ukrainian flag over Mala Seidemynukha (approximately 61km northeast of Kherson City) on November 3, but the village had likely been liberated prior to the official confirmation.[40] The Russian Ministry of Defense (MoD) claimed striking Ukrainian positions and ammunition depots but did not report ground assaults from either side.[41]

Ukrainian forces continued to strike Russian transportation nodes and logistics points as part of their ongoing interdiction campaign. Geolocated footage showed that Russian forces are still operating ferry crossings near the barge bridge under the Antonivsky Bridge.[42] The Ukrainian General Staff confirmed an earlier reported strike on an administrative building in Hola Prystan (about 13km southwest of Kherson City) that killed 18 Russian servicemen and wounded two Russians on November 3.[43] Ukraine’s Southern Operational Command reported that Ukrainian forces also struck two ammunition depots in Bashtanka and Snihurivka raions in Mykolaiv Oblast.[44] A Russian milblogger also reported the activation of Russian air defense systems and smoke in the area of the Kherson City shipyard but did not provide visual evidence.[45] 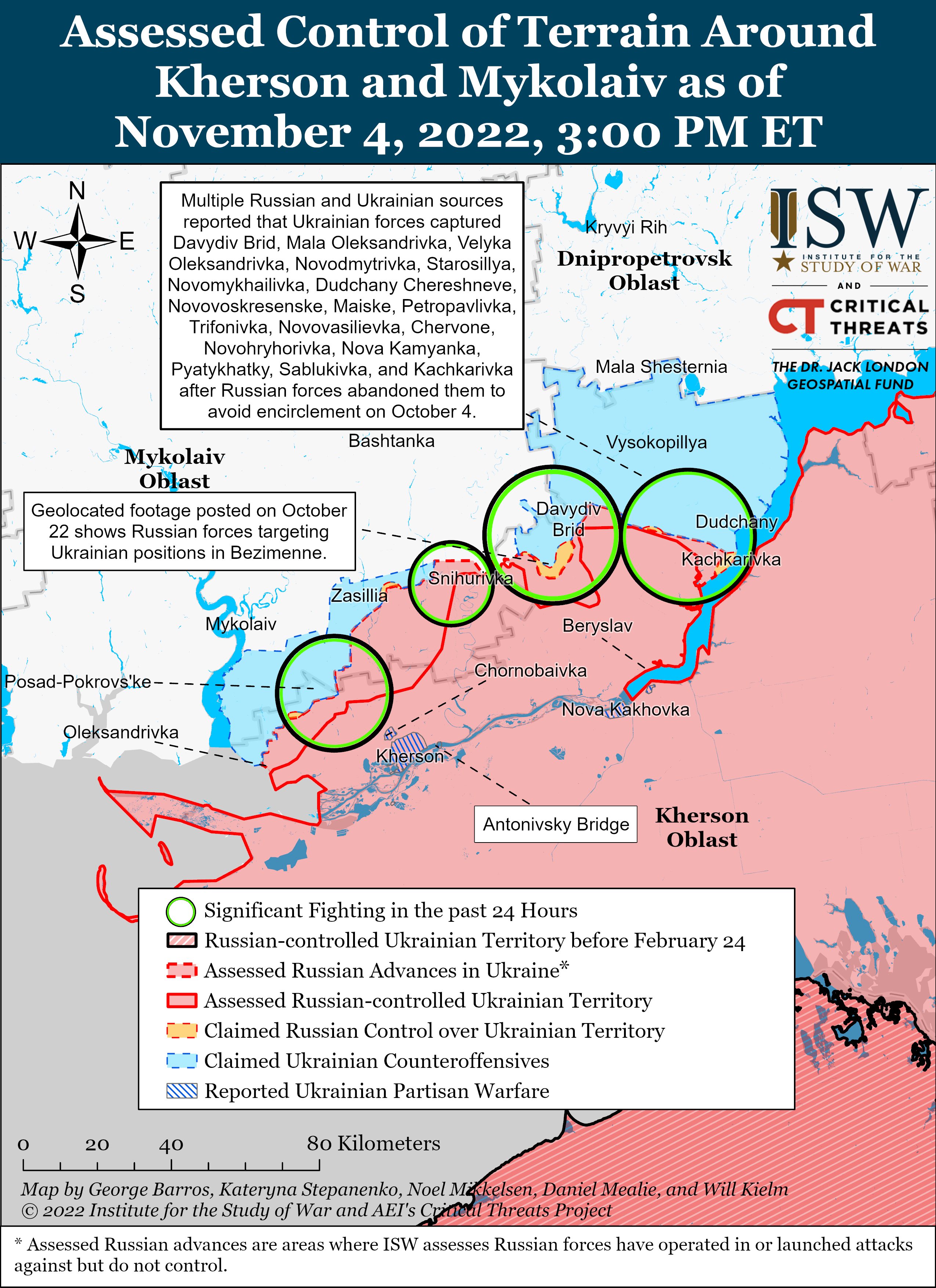 Russian forces continued offensive operations in the Avdiivka and Donetsk City area on November 4. The Ukrainian General Staff reported that Ukrainian forces repelled Russian assaults southwest of Avdiivka near Marinka (28km southwest of Avdiivka) and Novomykhailivka (37km southwest of Avdiivka).[49] Social media video footage posted on November 4 shows Ukrainian forces destroying a column of Russian vehicles and equipment in the vicinity of Opytne (15km northwest of Donetsk City).[50] The Donetsk People's Republic (DNR) militia posted a video on November 4 purporting to show the DNR 3rd Guards Brigade striking a Ukrainian manpower and equipment concentration in the direction of Horlivka (about 63km north of Donetsk City).[51] A Russian milblogger claimed on November 4 that the 2nd Reconnaissance Company of the DNR Sparta Battalion cleared Ukrainian positions in the Avdiivka direction near the M-4 highway a few days ago.[52] The source claimed that the Sparta Battalion, DNR Somalia Battalion, and other DNR and Luhansk People’s Republic (LNR) units successfully repelled Ukrainian attacks in the area.[53] Another Russian milblogger claimed that the 11th DNR Regiment is encircling Avdiivka and will take the settlement.[54] Russian forces continued routine shelling in the Avdiivka area.[55] 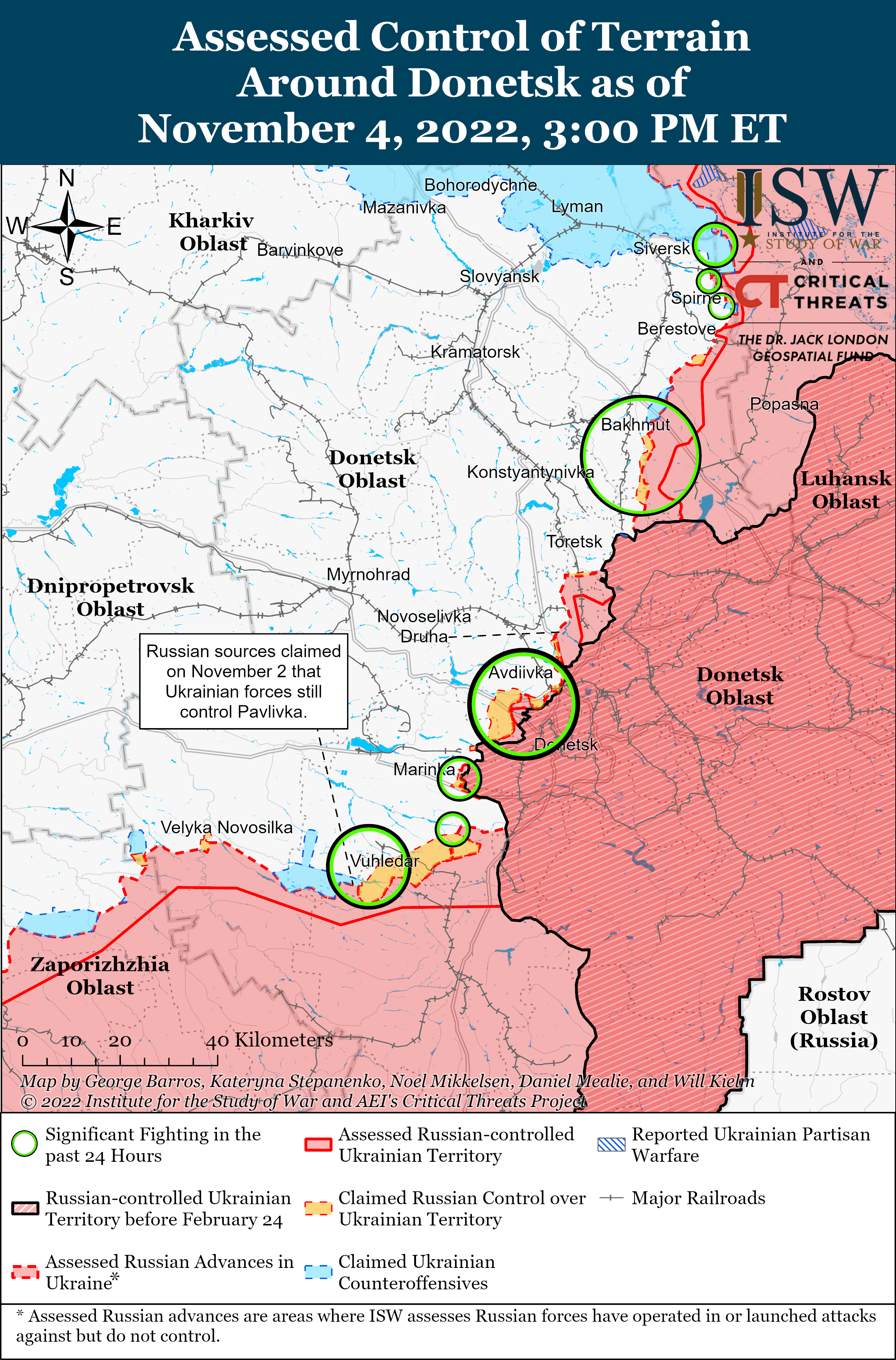 Russian officials are increasingly refusing to acknowledge deaths of mobilized men. Social media users complained that Volgograd Oblast officials are not making any public announcements to commemorate mobilized men who reportedly died on October 24 in unspecified locations.[69] Another local report noted that multiple mobilized men from Volgograd Oblast have been buried every day since October 28.[70] Russian mobilized men are also continuing to show significant morale issues, with mobilized elements of the 252nd Guards Motorized Rifle Regiment recording a video appeal in which they refused to fight and asked to return to Russia.[71]