Key Takeaway: Turkey conducted its first simultaneous multi-theater counterterrorism operation against the PKK in Iraq and its Syrian offshoot, the YPG, on February 2, 2022. The simultaneity of this operation is the most recent demonstration of Turkey’s fundamental shift in northern Syria and Iraq from full-scale ground incursions to a strategy of sustained counterterrorism pressure. Turkey’s ability to maintain a high tempo against the PKK and the YPG outside major incursions and its emphasis on airpower—including drone strikes—allow Ankara to circumvent the international political costs of its past capture-and-hold campaigns in Syria. Separately, Turkey is approaching Baghdad for counterterrorism and defense cooperation against the PKK. Turkey’s two-pronged diplomatic and military strategy may precipitate new PKK and Iranian proxy attacks to disrupt or retaliate against the Turkish military presence in both Syria and Iraq.

Turkey’s first-ever simultaneous cross-theater air campaign is a product of its combined counterterrorism approach to Syria and Iraq. The Turkish Armed Forces (TSK) conducted its first simultaneous air campaign in Syria and Iraq against People’s Protection Units (YPG) and Kurdistan Workers’ Party (PKK) positions on February 2.[1] Turkish airstrikes hit YPG and PKK positions as well as some civilian areas in Malikiyah in Syria’s Hasaka Governorate and Iraq’s Sinjar District and Makhmur Refugee Camp on February 2.[2] The TSK used at least 60 aircraft, including armed drones and F-16 fighter jets in the campaign dubbed “Winter Claw.”[3] Turkey’s coordinated campaign across Iraqi and Syrian positions reflects its longstanding treatment of northern Syria and northern Iraq as two halves of a single counterterrorism theater.

Turkey and Turkish-backed forces are fighting across a wider frontline with the YPG in Syria. After the Turkish airstrikes, Turkey and the Turkish-backed Syrian National Army (SNA) initiated clashes with the YPG on February 2 onwards in at least eight different towns, including Tel Rifat, Aleppo Governorate; Tel Tamr, Ain Diwar Village, Tel Abu Rasin, and Darbasiyah in Hasaka Governorate; and Tel Abyad and Ain Issa, Raqqa Governorate.[4] The TSK did not attribute the ground fighting to Operation Winter Claw. However, the TSK likely timed these simultaneous ground and air campaigns to reinforce each other in pressuring the Kurdish YPG and PKK groups. Turkey and Turkish-backed Syrian forces have expanded the area in which they have launched or had planned to launch simultaneous attacks against the YPG forces, overstretching the YPG.[5]

Ankara is successfully keeping its high-tempo military activities below the “incursion threshold” to minimize domestic and international political costs. Turkey is now able to maintain a continuous pace of targeted drone strikes against top PKK commanders, almost-daily clashes with the YPG in Syria, and tight aerial surveillance over the PKK in northern Iraq—all without declaring a new cross-border campaign.[6] This strategy of sustained pressure is a major shift from Turkey’s past incursion approach in Syria or Iraq, which was confined to conventional, deadline-driven ground campaigns with political, resource, and weather restrictions. Introduced in late 2020, the new approach aims to disrupt command structures and paralyze PKK and affiliate groups’ movements between Syria, Iraq, and Turkey without depending on incursions. Its counterterrorism emphasis also circumvents the international diplomatic costs that plagued Turkey’s past cross-border incursions. Most recently, Ankara received significant pressure from the United States and Russia against a potential new cross-border incursion in October 2021.[7]

Turkey’s emphasis on drones and surveillance technologies has allowed Ankara to impose sustained pressure on areas with YPG and PKK presence. The wide geographic range of the TSK’s targets on February 2-3 reflects Turkey’s growing ability to sustain simultaneous or consecutive campaigns on multiple fronts across countries. Turkey’s investments in domestic defense production have been critical in developing this capability. Its emphasis on airpower (manned and unmanned) played a key role in evolving previously seasonal anti-PKK campaigns into the continuous ones Turkey maintains today. Turkey has used drones for surveillance and targeted attacks in its push to paralyze PKK supply lines and kill PKK leadership. This strategy has proved successful in cutting off PKK’s access to Iraq, minimizing casualties inside Turkey, and confining fatalities to northern Iraq, as well.[8]

Ankara couples its military campaigns against the PKK with political and defense outreach—particularly in Iraq. Turkish officials, from President Erdogan to Turkey’s Ambassador to Iraq, have focused on cultivating ties with key Iraqi Sunni officials since October 2021—likely to build a pro-Turkey Iraqi Sunni political alliance with which Ankara’s Iraqi Kurdish and Turkmen partners could align.[14] Turkey likely perceives military and political support from the Iraqi Government and the Kurdistan Regional Government as necessary to remove the PKK from parts of northern Iraq. Turkey even offered drone sales to Baghdad and military exercises with the Iraqi government to incentivize greater defense cooperation, though no agreements have been signed yet.[15] However, Turkey’s political interference in Iraq is likely a key motivator for the Iran-backed attacks against the Turkish base in Bashiqa.

Turkish officials likely view the transformation of Ankara’s counterterrorism approach in Syria and Iraq as a successful strategy. The TSK will likely continue forcing the Syrian Kurdish group to overstretch across a wide frontline.  Turkey’s sustained campaign of surveillance and drone strikes is increasingly capable of cutting the PKK’s access from Iraq to Turkey and disrupting its Syria-Iraq networks.

However, Ankara’s new strategy comes with costs and risks. Turkey’s sustained bombing campaign is destabilizing Kurdish-populated zones in both Syria and Iraq. Ankara’s approach may also precipitate transnational responses from Iranian proxy or PKK-aligned groups against TSK positions in Syria and Iraq. Turkey’s strategy relies heavily on the sustained use of its F-16 fleet. While not an immediate problem, that fleet is rapidly aging. If Ankara wants to sustain an airpower-heavy strategy, it will need to secure replacements or upgrades for its fighters. Turkey was expelled from the F-35 fighter program in 2019 and has been lobbying the United States for re-inclusion or other access to fighter technology. 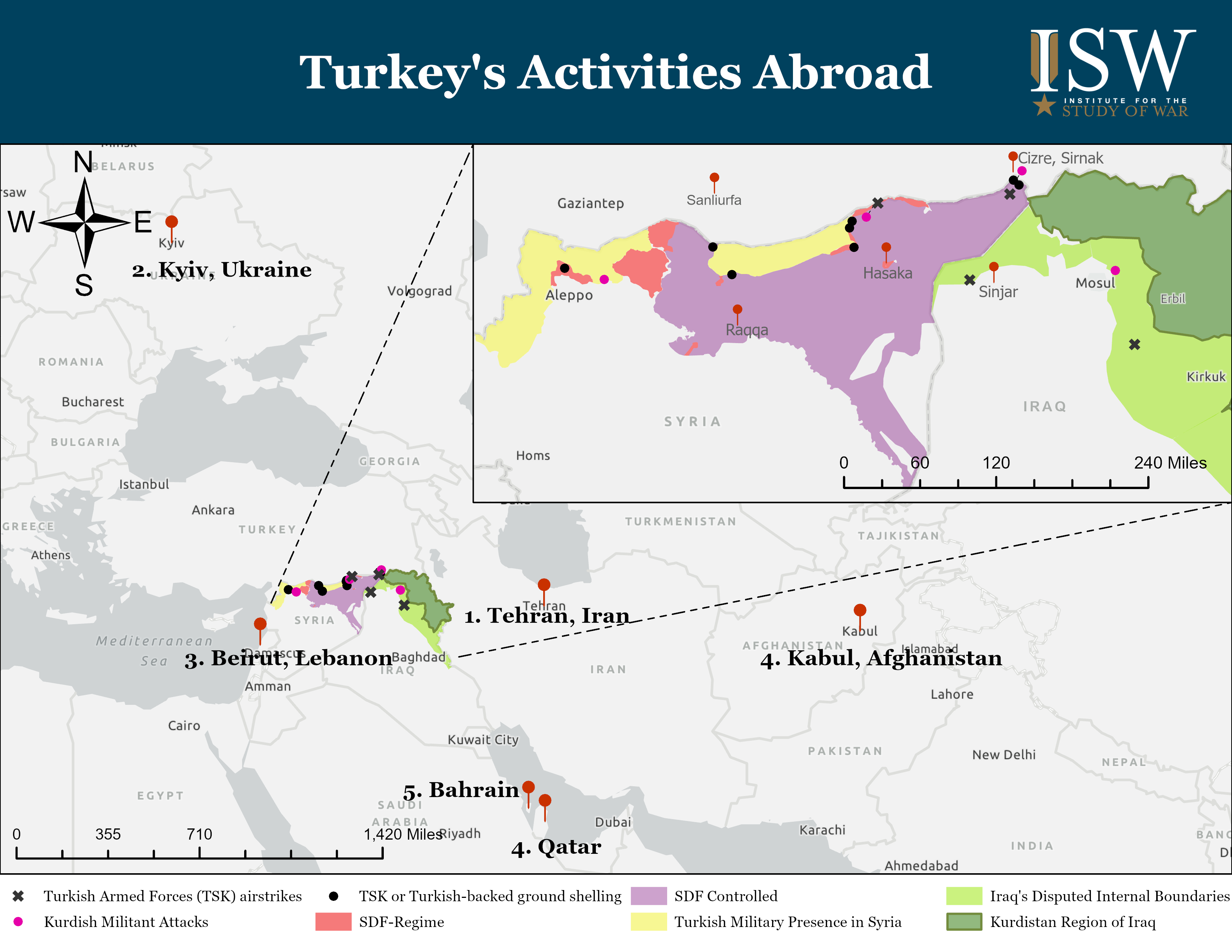 [5] In October 2021, Turkish Armed Forces deployed troops and equipment toward the border in preparation for a possible Turkish incursion. The preparation never materialized to an actual military campaign, however the deployments also indicated an expansion of the area that Turkish and Turkish-backed forces were planning to target the YPG from.

[6] Turkey also killed senior YBS leaders with drone strikes in Sinjar August and December 2021. Shingal Resistance Units (YBS) was formed of local Yazidi fighters in 2014 to fight ISIS. Turkey considers the YBS to be an offshoot of the PKK

[12] No group has claimed the attacks, however ISW assesses that Iran-backed Iraqi proxies might have conducted most if not all of the attacks due to the immediate proxy criticism of Turkish military presence in Iraq after each attack.

“A Second Burst of 4 Missiles Target the Turkish Base Responding to the Artillery of the Turkish Occupation,” Sabereen News Telegram, January 16, 2022. t dot me/sabreenS1/39135

[14] Turkish President Recep Tayyip Erdogan summoned Iraqi Parliamentary Speaker Mohammed al-Halbousi and US-sanctioned businessman Khamis al-Khanjar, the leaders of Iraq’s two largest Sunni blocs, to Ankara in October and reportedly encouraged them to form a unified Sunni political alliance. They formed that alliance in January and aligned with Iraqi nationalist Shi’a cleric Moqtada al-Sadr and the Turkey-backed Kurdistan Democratic Party (KDP) to attempt to form an Iraqi government with limited Iranian influence. The Sadr-led coalition is attempting to reinstate current Iraqi Prime Minister Mustafa al-Kadhimi, who is close to Saudi Arabia, the UAE, and Turkey and has written extensively about the importance of counterbalancing Iranian influence in Iraq with Gulf state relations.

[21] https://www.syriahr.com/en/237166/, https://twitter.com/ali_avissta/status/1488593010610876418, https://twitter.com/waledALedlbe/status/1488467777816076289 The protesters burned tires outside the building and removed the Turkish flag from the Turkish electricity company’s offices. The company, AK Enerji, announced reducing electricity supplies to 12 hours a day, prompting protests, according to local sources. Civilians held similar protests against AK Enerji in al-Bab on January 4 due to harsh winter weather and rising electricity prices.