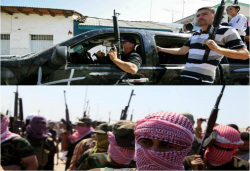 Paramilitary groups are growing like weeds in the blood-soaked soil of Mexico's cartel hotspots. Across the country, self-defense groups have banded together to take on the country's cartels, and now the government faces a problem all too familiar to veterans of the American military adventure in Iraq. How to go about bringing these groups under the umbrella of the central government?

Ordinary citizens have banded together in at least 13 states to form so-called autodefensas, or self-defense groups. This month, the Mexican government moved to disarm many of those groups, and on Monday thirty autodefensas signed a deal integrating these paramilitary groups into the government's Rural Defense Corps, a part-time force that has traditionally consisted of small platoons for local patrols and which answers to the Mexican military. And if you want a sense of just how difficult it is to work vigilantes into a military hierarchy, look no further than the Iraqi province of Anbar, where the half-hearted integration of Iraqi militias failed to keep the peace and has now allowed al Qaeda to return with a vengeance. In a grim harbinger of Iraq's possible future, the militant group recently conquered parts of the key city of Fallujah.

"You have to integrate these guys into a formal set or system," Lt. Gen. James Dubik, a senior fellow at the Institute for the Study of War and who helped oversee the training of the Iraqi security forces from 2007 to 2008. Dubik said that would involve incorporating them not only into programs like the Rural Defense Corps, but also making sure that they're accepted by the communities in which they operate and ensuring that there's effective judicial and military oversight.

"They're going to have their own leaders, but they have to report to some governmental structure," Dubik said. "You want to pick either police or military leaders who have a good track record of taking care of their soldiers and the people under their jurisdiction. In Iraq, where we had good police leaders and military leaders who took the [Sons of Iraq] under their wing, we had much better performance from them."

Know who you're dealing with.

In Anbar, the Sons of Iraq were "mostly made up of former insurgents," Wing notes. That's a worry in Mexico as well, where many Michoacan residents are concerned that some self-defense forces have connections to rival cartels. "Know who these guys are," Dubik said. "Register them, either biometrically or in some other system, so if they go rogue you know who they are."

Prepare for the cartels to strike back.

"If this program is successful, the Mexican government should prepare for a counterattack," Dubik said. "If this works, the cartels aren't going to like it and they're going to go after these guys. The government and these local forces need to be prepared for that."