Security and Stability in RC-East: A Field Report with Lieutenant General Daniel Allyn 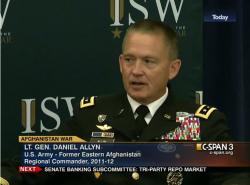 On August 2, 2012 ISW hosted a Field Report with Lieutenant General Daniel Allyn, who discussed the evolving security situation in Eastern Afghanistan, the approaching 2014 drawdown, and drivers of instability in the conflict.  Allyn recently returned from a year-long combat tour in Afghanistan where he served as Commanding General of Regional Command-East and of Combined Joint Task Force-I.  In June, LTG Allyn took command of the XVIII Airborne Corps and Fort Bragg. LTG Allyn previously served as the Deputy Commanding General of XVIII Airborne Corps and Chief of Staff, XVIII Airborne Corps, including duty as Chief of Staff, Multi-National Corps Iraq.

General Jack Keane (Ret.), Chairman of ISW, served as the moderator of the discussion.  GEN Keane completed 37 years in public service in December 2003, culminating as acting Chief of Staff and Vice Chief of Staff of the US Army.  He previously commanded the XVIII Airborne Corps and the 101st Airborne Division.  Currently, Keane serves as the president of consulting firm GSI, LLC, is a director of MetLife and General Dynamics, chairman of the Knollwood Foundation, a member of the Secretary of Defense’s Policy Board, the George C. Marshall Foundation, the Center for Strategy and Budget Assessment, the Council on Foreign Relations, the Smith Richardson Foundation, a trustee at Fordham University, and an advisor to Welcome Back Veterans and American Corporate Partners.