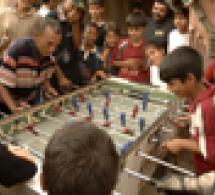 Following a two week visit to Iraq that spanned the entire country, ISW President Kimberly Kagan co-authored a Wall Street Journal Opinion piece that considers the "New Reality in Iraq". This week, she also wrote a cover story for the Weekly Standard on "The Future of Iraq" that looks at the political and security dimensions of the country. The article describes her visit to the headquarters of a small, secular political party preparing for Iraq's upcoming provincial elections, and the competition among Iraq's leading political parties in advance of this potentially watershed event.

The security situation in Iraq has improved over the last several months as the Iraqi Security Forces, supported by the Coalition, have gained control of the former militia safe-havens in Sadr City, Basra, and Amarah. News reports state that many leaders of the Iranian-backed Special Groups have returned to Iran. Likewise, many formerly violent militia leaders and fighters have dispersed or gone to ground. The lingering networks of the Special Groups nevertheless remain a serious, potential threat to the security of Iraq and the stability of its government. ISW's interactive map provides a great visual understanding of the level of activity in the country by and against the Iranian backed Special Groups.

Finally, ISW has also updated the Iraq Statistics Reference. The updated statistics show a significant drop in the number of attacks against Iraqi infrastructure, bombs (IEDs and Mincs), sniper and other small arms attacks, and mortar and rocket attacks. Since May 2007, the total number of attacks has dropped from nearly 1600 to just over 200. The new statistics also show the level of ethno-sectarian violence in Baghdad, as well as the number of weapon caches found and cleared by Coalition Forces.