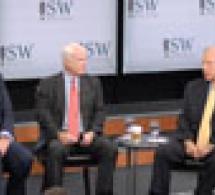 Washington, D.C. – On Thursday, June 30th, the Institute for the Study of War (ISW) was pleased to host a panel discussion at the Newseum on the future of the Afghan war and the President’s recent decision on the withdrawal of troops.  ISW’s panelists included Senator John McCain, Senator Joseph Lieberman, and General Jack Keane. Michael O’Hanlon of the Brookings Institute moderated the discussion.

The speakers explored a wide range of concerns including the U.S.-Pakistan relationship, the U.S. relationship with Afghan President Hamid Karzai, and President Obama’s announcement to withdraw 10,000 troops by the end of this year and the remaining 23,000 surge troops by September of 2012. Commenting on this decision, Senator McCain said, “This is now the Obama-Biden strategy. This is not Petraeus' strategy or any other military leader that I know of … I think it's going to be extremely difficult to carry out a successful counterinsurgency strategy.”

General Keane, former Vice Chief of the Staff of the Army, held that President Obama’s withdrawal decision was ill-advised. “I think there's a certain recklessness to it because what it does is it's going to force us to do more against the Haqqani Network with considerably less. And that's going to drive our casualties up, make no mistake about it,” said Keane.  Click to watch the full video or read the transcript.

Just hours after the President gave his announcement on troop withdrawal numbers, French President Nicolas Sarkozy made a similar announcement that France will pull out its 4,000 troops from Afghanistan starting this summer, at a pace comparable to that of the U.S.

The U.S. has expressed its willingness to keep 10,000 troops in Iraq past the deadline for complete withdrawal slated for the end of the year. This proposal was made in light of the divided and unstable Iraqi government. The Iraqi government has not made any formal requests for the U.S. to stay past its scheduled departure date, but U.S. Administration official signaled this week that, should they make such a request, it will be seriously considered. For more on this story, click here.

This month has already been a period of substantial change as the key positions of Secretary of Defense, ISAF commander, head of the CIA and ambassador to Afghanistan have begun shifting to new leadership. Marine Corps Lt. General John Allen, the nominee to succeed General Petraeus as the head of ISAF and U.S. Forces in Afghanistan, said in his confirmation hearing that he supports the President’s decision to withdraw surge forces by September of 2012. He cites projections for an additional 50,000 Afghan National Security Forces and an additional 20,000 police forces that are expected to join the fight by next year as an important factor in mitigating risk. When asked by Senator John McCain if the President’s decision has made his job too difficult, he declined to comment. Click here to watch the video.

Just a day after General Allen’s hearing before the Senate Armed Services Committee, things took a deadly turn in Kabul as terrorists stormed the Intercontinental Hotel with suicide bombers and gunmen. It is believed that the Haqqani Network orchestrated the bloody attack that left 11 civilians and 2 police officers dead. For more on this story click here.

ISW Director of Research Marisa Cochrane Sullivan testified before the House subcommittee on the Middle East and South Asia about the current situation in Iraq. Click here for the transcript of her official statement.