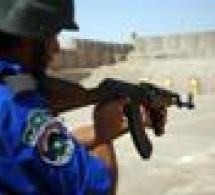 The Institute for the Study of War is out with a must read report covering the little known history of U.S. Forces’ greatest indigenous asset during the Surge: the Iraqi Security Forces (ISF).

ISW Senior Fellow, General James Dubik (Ret.), has authored a compelling monograph which discusses how, under his leadership at Multi National Forces-Iraq (MNST-I), U.S. commanders vastly accelerated the growth of the Iraq Army and Police as part of a broader counterinsurgency strategy. The addition of 100,000 Iraqi troops during the Surge also allowed U.S. troops to reduce their footprint, lightening the burden for foreign forces in Iraq once the insurgents’ networks had been largely dismantled.

General Dubik’s security forces publication is the first in our newly released series, Best Practices in Counterinsurgency (COIN).This series examines pivotal COIN operations executed in Iraq by the commanders who designed, participated in and led the successful missions in theater. The products produced from this research series will record the lessons learned on the battlefield and serve as an educational tool for current and future military thinkers.

General Dubik also recently returned from Afghanistan where he evaluated the development of the Afghan National Security Forces (ANSF). Although each war has its own unique challenges, many of the lessons learned from building Iraqi Security Force are applicable to Afghanistan. Dr. Kim Kagan and General Dubik have called for changes in current Army doctrine and the need for training more ANSF quickly.