Why the Taliban Are Winning – for Now 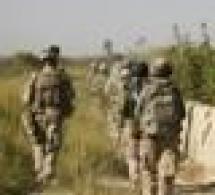 ISW President Kim Kagan recently returned from traveling across Afghanistan where she participated in General Stanley MCChrystal’s strategic review of the US and NATO role in the ongoing war.

Fresh with provocative insights and policy proposals, Dr. Kagan has authored two ground-breaking opinion pieces that are generating buzz from people serious about understanding the conflict against the Taliban and other enemy groups in Afghanistan.  To be noted, the views of Dr. Kagan do not necessarily represent those of General McChrystal or the assessment he will provide to President Obama and Secretary Gates.

Why the Taliban are Winning – for Now
From ForeignPolicy.com

Déjà Vue All Over Again in Afghanistan
From WeeklyStandard.com

ISW readers will be excited to hear we have partnered with the most popular website in Foreign Affairs, www.ForiegnPolicy.com to contribute weekly to their new Af/Pak Channel – a blog dedicated to covering the security affairs in South Asia. Keep checking our website for new additions!