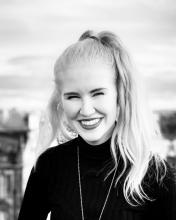 Katherine Lawlor is a senior intelligence analyst at the Institute for the Study of War (ISW) focusing on irregular and proxy warfare, state fragility, and disinformation. Since early 2022, Kat has supported ISW’s Russia team in its standards-setting coverage of the Russian invasion of Ukraine.

Kat previously helped to stand up ISW’s Iranian proxy warfare research portfolio covering the global activities of Iran’s Axis of Resistance. She has published two longform research reports on US and adversary interests in the Middle East and her analysis has appeared in outlets including The New York Times, The Washington Post, Foreign Policy, Voice of America, Financial Times, Politico, Task & Purpose, Defense One, and others.

Prior to joining ISW, Kat lived and studied in Russia. She has worked for political campaigns, on Capitol Hill, and at her local public radio station. Kat holds an MA in International Relations from the University of St Andrews in Scotland, where she studied civil-military relations and Russian.

Warning Update: Russia May Conduct a Chemical or Radiological False-Flag Attack as a Pretext for Greater Aggression against Ukraine