The Rusafa security district is situated on the eastern bank of the Tigris River in the heart of the city. Rusafa neighbors the Adhamiyah district to the north, and the districts of Karadah and 9 Nissan to the south and southeast. Rusafa also neighbors Sadr City along its northeastern border, and this proximity has given rise to a strong influence of Shi’a militias. The neighborhoods within Rusafa include: Abu Nuwas, Fadhil, Idrissi, Keeylani, Medical City, Mustansiriya, Neel, Nidal, Saadoun, Sheik Omar, and 14 July. Rusafa is also home to many key economic, political, educational, and medical institutions. The district contains large markets, government ministries, bus stations, educational institutions such as Mustansiriya University, hotels, hospitals, and the Rule of Law Green Zone.

Rusafa is primarily a working-class district. Although the district has historically had a mix of Shi’a, Sunni, and even Christian populations, the demographics have greatly shifted in recent years on account of increased sectarian violence. Today, Rusafa is predominantly Shi’a, with a Sunni enclave in Fadhil, located in northern Rusafa near Adhamiyah.  The district, therefore, straddles a sectarian fault-line; the Shi’a militias that dominate the district have faced violent resistance from Sunni insurgents and al Qaeda strongholds. As a result, both Sunni and Shi’a civilians have fallen victim to sectarian cleansing, forced displacements, rocket attacks, mortar fire, and car bombs.

Since Operation Fardh al-Qanoon began in February 2007, U.S. forces have conducted a number of operations to secure Rusafa.  In February and March, as part of Operation Safe Market and Fardh al-Qanoon, temporary barriers were erected around an area of Shorja market, one of Baghdad’s largest commercial centers, to control vehicular traffic, reduce the likelihood of car bombings, and revive the flagging economy. In mid-June 2007, as the corps-offensive, Operation Phantom Thunder, commenced, Coalition and Iraqi Security Forces launched large clearing operations aimed at reducing sectarian violence and bringing increased security to Rusafa. At that time, U.S. and Iraqi forces also began a six-week project to construct barriers around another Rusafa market, to boost security and promote economic revitalization.

Coalition and Iraqi forces have made significant gains in the Rusafa District, particularly since mid-June 2007. The measures taken to protect and revitalize Rusafa’s markets have met with initial success. The emphasis that has been given to clearing Rusafa since the start of the Baghdad Security Plan has also brought a degree of stability to the district. Also, the creation of the Rule of Law Green Zone, a fortified legal complex in Rusafa that began hearing cases in June, marked a key advance in rebuilding stable and functioning legal institutions. The Rusafa district has improved greatly over 2008; however, destabilizing forces, such as Sunni insurgents in the Fadhil area and Shi’a extremists elsewhere, remain. 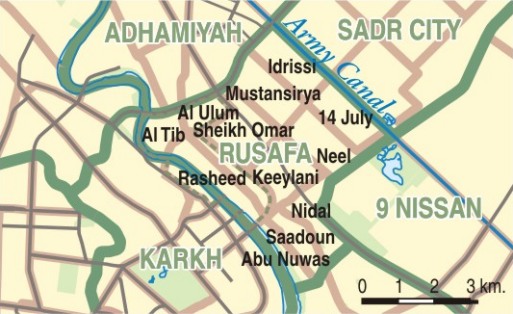