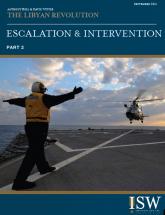 This report is the second installment of a four-part series on the revolution in Libya. Part Two: Escalation and Intervention details the international reaction to the war and the process that led to the U.S. and allied military intervention in March 2011. The paper begins with the initial international reaction to the uprising in Libya in the early spring of 2011 and the international debate over a no-fly zone. This section documents efforts by the United States and its European allies to garner broader support for intervention in Libya, especially from Arab states. During this time, France, Great Britain, and the United States led international efforts to intervene in Libya. The third part of the paper explains the efforts to implement a no-fly zone under the U.S.-led Operation Odyssey Dawn in March 2011. This report concludes with a discussion of the NATO-led Operation Unified Protector and emerging tensions amongst NATO allies over the way forward in Libya.