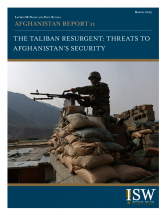 by Lauren McNally and Paul Bucala

The success or failure of the U.S. mission in Afghanistan has reached a critical juncture. Newly appointed Defense Secretary Ashton Carter announced on February 21, 2015 that the United States is considering a number of changes to the U.S. mission in Afghanistan, including slowing the drawdown timetable and rethinking the U.S. counter-terrorism mission. On March 16, 2015, anonymous U.S. officials confirmed that the United States is likely abandoning its plans to cut the number of U.S. troops to 5,500 at the end of the year. The United States could allow many of the 9,800 troops in Afghanistan to remain beyond 2015. A visit by Afghan President Ashraf Ghani to Washington, DC from March 22-25, 2015 is intended to discuss these issues.

The security environment in Afghanistan as it stands warrants at least this revision of drawdown rate and timeline. The Afghan National Security Forces face numerous challenges in 2015 that may significantly hinder their capacity to assume responsibility for the country’s security.

First, the insurgency itself threatens the Afghan government’s control over terrain. Taliban attack patterns in 2014 were not typical of the previous two years. The Taliban conducted high-profile attacks on district centers and security checkpoints throughout the country in late 2014, often with massed, coordinated assaults. These factors led to casualty rates for both Afghan security forces and Afghan civilians in 2014 higher than in any of the last six years.

A persistent Taliban presence outside of Kabul indicates that the insurgency is fighting for more than remote district centers, and furthermore that it can regenerate itself and strengthen its military capability. This continued threat will set conditions for greater security challenges in 2015. The escalation in high-profile attacks within Kabul also indicates that the Taliban maintains the capability to threaten the presence of Western interests in the capital.

Far from defeated, the ongoing Afghan insurgency remains a serious challenge and threatens to reverse hard-won prior gains. This assessment contradicts some more optimistic statements by U.S. leaders at the end of 2014. The Afghan government is actively pursuing peace negotiations with the Taliban, but increased fracturing within the Taliban will likely impede a comprehensive peace deal. A looming deadline for withdrawal by international forces incentivizes the Taliban to strengthen its hand through future offensives. A fixed deadline, even further in the future, not tethered to the achievement of specific goals will not address this challenge.

Second, the ANSF lack requisite capacities as a counterinsurgent force. Although the ANSF was able to push back insurgents from seized district centers over the past year, the ANSF may not be able to sustain a sufficient forward presence to prevent their return. Helmand province in southern Afghanistan underwent repeated ANSF clearing operations, despite reports of success in ridding districts of Taliban militants. Security forces further north in Kunduz province, meanwhile, are unable to prevent the Taliban from expanding local governance institutions within contested districts. The insurgency’s resilience in the face of ANSF clearing operations suggests that the ANSF lacks the ability to clear and hold terrain decisively. The fight will protract over the long term, which is a problem at this rate of combat loss.

The ANSF continues to suffer from key capability gaps, especially in air support assets. As such, the Afghan Air Force will not be able to offer ground forces the same level of support that coalition air units provided. The lack of aviation for both firepower and mobility is likely one reason why the insurgents have been able to mass in larger numbers. If the current trend of insurgent attacks continues in 2015, the ANSF will experience increasing attrition through casualties and desertion, hampering its ability to complete its mission to secure Afghanistan.

Third, al-Qaeda and other terrorist groups continue to be present in Afghanistan and Pakistan. Al-Qaeda maintains safe havens in the region from which it continues to provide support to global terrorist activity. Concerns are also rising over reports of groups affiliated with the Islamic State spreading in Afghanistan. Preventing these groups from maintaining or gaining a solid foothold in Afghanistan is a strategic goal of the U.S. counter-terrorism mission, and is unlikely to be achieved by the ANSF on its own. There is little discussion about maintaining a counter-terrorism and advisory force past the 2016 end date for the U.S. mission. The violence witnessed in the last year is indicative of a resurgent enemy, and the ANSF will require robust, long-term assistance from the United States for support in containing these threats.

In light of these concerns, the reevaluation of U.S. policy towards Afghanistan already in progress is a necessity. A residual U.S. and international force will remain in Afghanistan through 2016 under current policy. Under the current withdrawal schedule, the U.S. plans to end its presence, apart from a Kabul-centric embassy protection force, by the end of 2016. This will leave the United States largely unable to identify and assist the ANSF with developments at the local level, permitting the Taliban to expand in ways that undermine core U.S. interests, such as seeing to it that Afghanistan has the ability to defend its borders.

The lessons learned from the withdrawal from Iraq in 2011 serve as a warning for a premature withdrawal from Afghanistan. The U.S. departure from Iraq left a fractionalized Iraqi Security Force incapable of providing security and a divisive government under Prime Minister Nouri al-Maliki. Perceived sectarian actions by the government and security forces hindered its ability to provide security and led to a resurgence of anti-government groups. The rise of the so-called Islamic State is a manifestation of the failure to address these political and security challenges in the wake of the U.S. withdrawal.

Afghanistan is not condemned to the same future as Iraq. The progress of the national unity government is a promising start. Early signs of cooperation between President Ashraf Ghani and Chief Executive Abdullah Abdullah alleviated fears of rekindled ethnic tensions within political institutions and helped prevent divisions within security forces. The ANSF maintains the capacity to protect key urban centers and will benefit from further capability and professionalism training under the guidance of the Resolute Support Mission. If given the chance, Afghanistan could become a secure and stable long-term partner for the United States.

President Ghani is a willing and welcoming potential partner in the Resolute Support Mission and wants to see both U.S. and Afghan interests met. One of Ghani’s first acts as president was to sign the Bilateral Security Agreement, and he remains a strong advocate of continued U.S. presence in Afghanistan. The United States is in a position to support Ghani as he leads Afghanistan into a new decade of transformation that includes a long-term and effective Afghan-U.S. security partnership, although he will face tough requirements to preserve the security of the country even so.

U.S. officials should consider whether Operation Resolute Support’s policy objectives, namely ensuring “stability” and “strong governance,” as well as U.S. long-term foreign policy goals can be realistically achieved in this two-year span. As Secretary of Defense Carter stated, “the U.S. has a very successful campaign in Afghanistan, but it is not finished and it needs to be won.” The risks of insufficient action are clear and threaten to reverse what progress has been made.