Certain components of the ongoing protest movement in Iran may have reached the threshold identified in US military doctrine for a “latent and incipient” insurgency. American counter-insurgency doctrine, using a modified version of the Maoist insurgency framework, defines the lowest level of insurgency as follows:

“The first phase is latent and incipient. During this phase, activities include the emergence of insurgent leadership, creation of initial organizational infrastructure, training, acquisition of resources, and political actions, such as organizing protests. A group that eventually becomes members of an insurgency may simply be a legitimate political group at this stage. Governmental actions and changes in society can transform political groups into insurgencies.”[1]

Components of the protest movement are approaching or have already achieved some of these requirements. The neighborhood youth groups and other protest organizations have seemingly continued playing significant roles in coordinating and planning demonstrations on specific days and in specific locations. These protest organizations are also encouraging and supporting citizens to attack and undermine the regime. The Mashhad Neighborhood Youth, for instance, published statements on November 16 and 17 calling on protesters to cooperate with one another to wage partisan warfare, block roads, and use explosives against security forces, among other activities, and referred to its “operational teams,” implying some level of organization.[2] The group advised protesters to wear protective clothing “according to previous training.”[3] The Mashhad youth group also stated that it is fighting a “full-scale war” against the regime—rhetoric that is consistent with the revolutionary tone used by other protest organizations in recent weeks.[4]

CTP has documented previous instances of protesters cooperating with one another. Protesters have coordinated extensively in certain locations in recent weeks using militant tactics to respond to the regime crackdown.[5] Protesters are furthermore developing the infrastructure necessary to stage a protracted struggle against the regime, such as establishing an informal medical care network.[6]

CTP cannot verify that any of these youth groups and other protest organizations are  in control of the movement or able to carry through on some of their directives. The regime has indicated that at least some of these groups have a local presence. Iranian state media reported on November 17 that the IRGC Intelligence Organization arrested over 25 members of the Oroumiyeh Neighborhood Youth.[7] An unidentified source spoke to Mehr News Agency claiming that the group organized the blocking of roads and destruction of public property. The Twitter account of the Oroumiyeh Neighborhood Youth has continued posting since the reported arrests.[8]

CTP is not prepared to forecast the trajectory of these protester networks or how they will behave in the weeks and months ahead. We have not yet observed clear signs of coordination across these groups at this time. CTP will continually update and reevaluate this analysis based on observed indicators, which we will continue reporting in these daily updates.

Protest organizations are trying to sustain the recent high protester turnout for at least three to four more days. Protests have surged across Iran since November 15 in commemoration of the three-year anniversary of the regime’s crackdown on the Bloody Aban protest wave in November 2019.[13] The Karaj Neighborhood Youth called for these commemorative protests to continue until November 20.[14] The Countrywide Youth similarly called for these protests to continue until November 21.[15] Protest turnout in the coming days may offer insight into how influential these particular protest organizations are.

At least 40 protests took place in 33 cities across 18 provinces on November 17, despite reports of rain throughout the country. Protest activity may surge in Khuzestan Province in the coming days as protesters seek to commemorate Kian Pirfalak, a ten-year-old boy whom security personnel killed when suppressing an anti-regime protest on November 16.[16] Security forces reportedly shot and killed fourteen-year-old Sepehr Maghsoudi in Izeh on that same date.[17] CTP assesses with moderate to high confidence that protests occurred in the locations below. 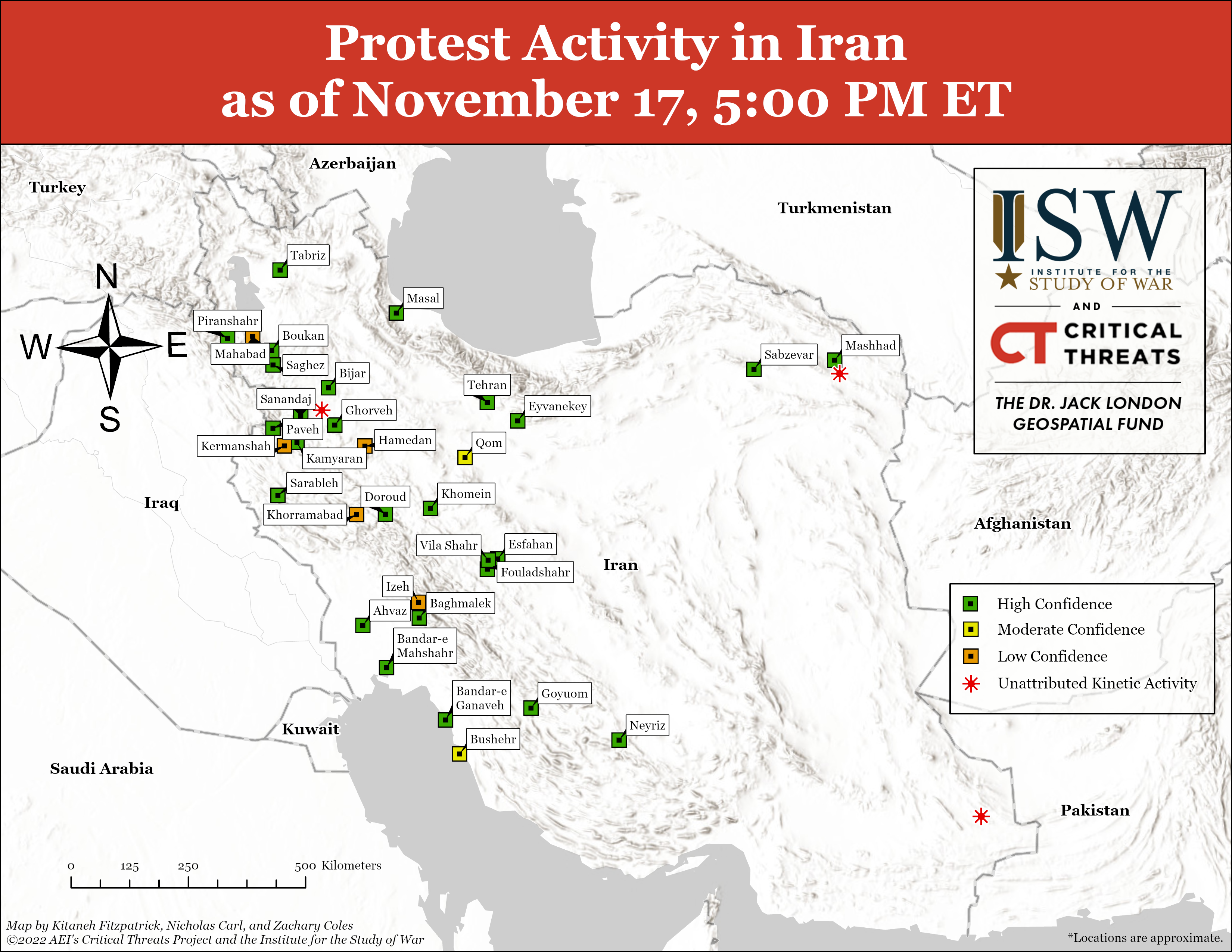 The regime may be trying to blame the Izeh attack on the Islamic State (IS) as part of an effort to associate the protests with terrorism. Iranian media outlets, including the Raisi-administration-controlled Islamic Republic News Agency, have circulated a seemingly fake IS claim of responsibility for the attack.[57] A BBC journalist argued that the statement is likely fake due to its grammatical errors and presentation.[58] The regime has intensified its information operation to link the protests to terrorism since the Shiraz attack on October 26 to delegitimize protesters and their grievances.[59]

Anti-regime outlet Iran International published purported leaked memos from the Artesh Ground Forces on November 17.[60] The Artesh Ground Forces reportedly issued a memo on November 7 requiring unit commanders to report daily whether any service members or their families participated in anti-regime protests or used anti-regime language. The Artesh Ground Forces reportedly issued a second memo on November 9, warning that anti-regime actors may sabotage military facilities. If true, these memos indicate that Artesh leadership is concerned about service members and their families joining and sympathizing with protesters. The English-language version of the Iran International article mischaracterized these memos, however, reporting that they “show that [Artesh] staff and their families have been supporting the popular anti-government protests since September.”[61] There is no information in the memos to corroborate this claim nor can CTP verify their authenticity.

Law Enforcement Deputy Commander Brigadier General Ghassem Rezaei denied that LEC officers are tired on November 17—a remark which could frustrate the low-level security personnel heavily involved in the crackdown and killing citizens. CTP has reported that security personnel are facing bandwidth constraints, exhaustion, and low morale since September 2022.[62] Rezaei stated that the security personnel's tirelessness is evident from “their cheerful faces.” Rezaei’s comments are particularly tone-deaf given the rate at which security personnel are dying.

Likely Iranian proxies conducted a rocket attack on US forces in northeastern Syria on November 17.[64] The attack caused no casualties or damage to the facility. The IRGC may renew its regular proxy attacks against US positions in Iraq and Syria to expel US forces from the region and also respond to Washington’s perceived role in stoking the protests.

Interior Minister Ahmad Vahidi held a phone call with Turkish Interior Minister Suleyman Soylu to discuss security cooperation against terrorism, among other issues, on November 17.[65] Tehran and Ankara may increase cooperation against anti-regime Kurdish militant groups in northern Iraq and northern Syria in the coming weeks. CTP previously reported that Kurdish military and political groups in Iraq and Syria may face increasing attacks from Iran and Turkey simultaneously.[66] Vahidi is nominally responsible for administering the LEC in his capacity as interior minister. He likely plays a more prominent role in influencing regime defense and foreign policies, however, given his connections to the IRGC and his experience as the IRGC Quds Force commander from 1988 to 1998.[67]