The Iranian regime’s rhetorical responses to ongoing anti-regime protests may suggest that senior regime officials are posing for the benefit of Supreme Leader Ali Khamenei or other key power centers rather than trying to reach their restive populace. Regime disinformation about brutality against demonstrators is increasingly disconnected from reality and more likely to stoke protestor anger than to assuage it. President Ebrahim Raisi spoke at a women’s university in Tehran to illustrate that he retains support from young Iranian women in the face of mass protests by young women against the regime.[1] IRGC-affiliated media outlets are similarly propagating disinformation about protestor deaths, claiming that several protestors died from an underlying illness, suicide, and other causes unrelated to police brutality.[2] Uncorroborated reports suggest that the regime edited the Telegram account of Sarina Esmail Zadeh—whom Iranian security forces brutally killed during an anti-regime protest—to support to the regime’s narrative that she committed suicide.[3]

These kinds of regime messages are unusually disconnected from reality and alienating to protestors and those who sympathize with them. These narratives may be directed instead at an internal audience. Khamenei appeared in stable condition during an appearance on October 3 and has seemingly recovered from reports of deteriorating health.[4] Recent regime messaging nevertheless suggests that discussions surrounding supreme leader succession are ongoing. The regime’s tone-deaf messaging could be intended to shape the perceptions of leaders, like Khamenei, who receive information about ongoing protests indirectly and possibly via television, about how well regime officials and possible successors are doing rather than those, like the protesters and the outside world, who can see the situation for themselves more directly.

The growing gap between the fictional world described by regime messaging and the reality on the ground will likely inflame demonstrations, in any event.

Anti-regime protests significantly increased in number and scale on October 8. CTP assesses that preorganized anti-regime protests occurred in at least 29 Iranian cities in 20 different provinces. October 8 saw some of the most significant protest activity since demonstrations began on September 16. October 8 protests featured participation from a broad swath of the Iranian population including marginalized minorities, merchants, students, and the urban elite. Iranian social media users documented unrest in the following locations: 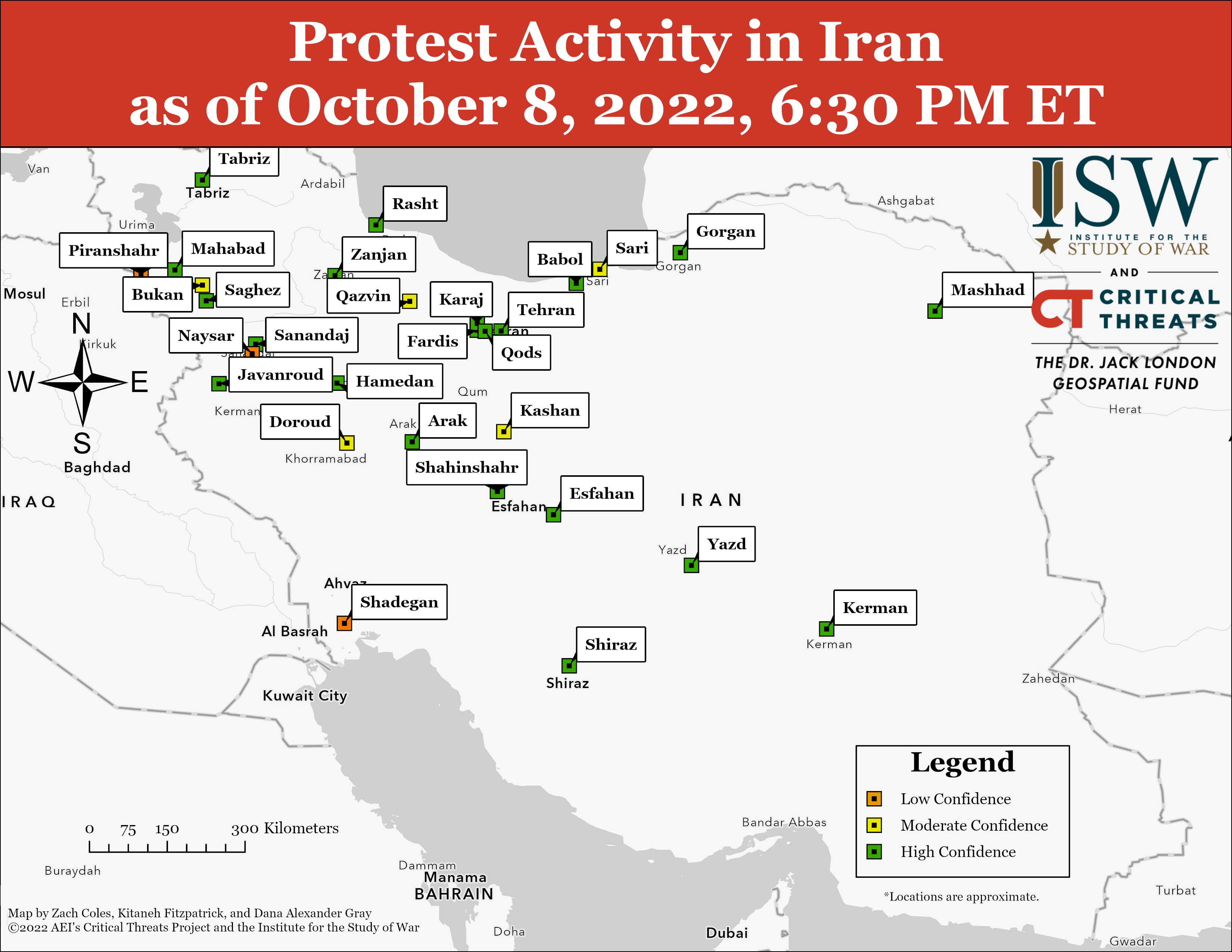 Footage shared on social media suggests that security personnel fired live ammunition at protestors and bystanders in several cities on October 8, possibly marking an escalation in the regime’s protest suppression response. Security personnel have largely arrested or fired rubber bullets and paintballs against anti-regime protestors in major Iranian cities in prior weeks, with the noteworthy exceptions of lethal force used in Kurdish cities and in Zahedan on several occasions.[5] Security forces reportedly fired live ammunition at three protestors—one of whom was a bystander not involved in the protests—in videos that are being widely circulated and condemned by social media users.[6] Iranian social media users compared the violent clashes between security forces and protestors on October 8 to war zones.[7]

The regime may increasingly use lethal force as it struggles to contain protests in some Iranian cities. A provincial law enforcement official vowed decisive action against protestors on October 8.[8] Tehran Governor Mohsen Mansouri also acknowledged flaws within the city’s local law enforcement command‘s ability to respond to protests and noted that Tehran security personnel had not slept in several days because of their involvement in suppressing the demonstrations.[9] Some Iranian social media users reported that protestors successfully repelled security forces in areas throughout Tehran and Sanandaj cities.[10] Other reports suggest that a judiciary official in Saghez sustained injuries in clashes with protestors on October 8.[11]

The increased use of lethal force by regime security services is not surprising given the guidance Khamenei gave in his speech advocating for harsher crackdowns on October 3, as CTP has previously reported. Regime security force leaders have been echoing Khamenei’s commitment to crush the protests since that speech, including in a joint letter released on October 6.[12]  The regime will likely continue to use greater violence and more lethal force until and unless Khamenei directs it to take a softer approach, which is unlikely.

Iranian protestors are seemingly able to coordinate despite extensive internet and telecommunication restrictions. Protestors successfully organized anti-regime protests on October 8, although it is unclear how they were able to do so.[13] Protestors have additionally demonstrated the ability to anticipate and blunt some of the regime’s demonstration suppression tactics. Footage circulating on social media shows protestors barricading streets to obstruct Iranian security forces’ movements in Tehran and other major cities, a tactic that regime officials have tried—and failed—to preempt.[14]

Iranian protestors are increasingly referring to anti-regime demonstrations as a revolutionary movement aimed at overthrowing the Islamic Republic. Recent protest slogans have evolved from grievances about Khamenei and Iranian regional objectives to explicit calls to topple the regime. Protestors were documented chanting slogans such as “stop saying protest, this is a revolution,” and “this is the year of blood, Khamenei will be overthrown” in recent days.[15] CTP cannot independently verify this footage.

The IRGC paused attacks into Iraqi Kurdistan likely in part to avoid undermining Iran-aligned Iraqi political factions’ efforts to form a government. Several Iran-aligned Shia Coordination Framework (SCF) officials were sworn in as MPs during the October 8 parliamentary session.[22] The new MPs filled the remaining vacant seats left open by the June 12 resignations of members belonging to Iraqi nationalist Shia cleric Moqtada al-Sadr’s political faction. The SCF is pursuing ongoing government formation negotiations with the Kurdistan Democratic Party (KDP) and the Sunni-dominated Sovereignty Alliance, which withdrew from their political alliance with the Sadrists on September 25.[23] An agreement between the SCF and the KDP and Sovereignty Alliance would likely bring together enough parliamentary seats form a government.[24] The IRGC likely intends to avoid jeopardizing the SCF’s negotiations with the KDP with more attacks in Iraqi Kurdistan.

The Iraqi parliament initiated an investigation to address prior Iranian attacks in Iraqi Kurdistan. Iraqi Parliament Speaker Mohamed al-Halbousi accepted a Kurdistan Democratic Party (KDP)-led October 6 petition to hold an emergency parliamentary session to discuss the IRGC’s recent attacks throughout Iraqi Kurdistan.[27] Halbousi directed the Security, Defense, and Foreign Relations Committee to prepare a report on Turkish and Iranian attacks in Iraqi Kurdistan during the October 8 parliamentary session.[28] Halbousi and Iraqi Deputy Speaker of Parliament Shakhwan Abdullah told press that Iraq will submit the report and associated emergency petitions to the United Nations Security Council and the Inter-Parliamentary Union.[29]