Russian President Vladimir Putin set information conditions for a military operation against Ukraine at a moment of his choosing on February 22. Russia will likely commence military operations to seize additional territory in eastern Ukraine within the coming days.

Russian President Vladimir Putin recognized the Donetsk and Luhansk People’s Republics (DNR and LNR) as covering the entirety of Donetsk and Luhansk Oblasts (provinces) in a speech on February 22.[1] Considerable parts of those oblasts remain in Ukrainian control with the heavily fortified “line of contact” running through both. Ukraine will not cede its portions of the oblasts voluntarily, so Putin will need to seize them militarily to make good on his recognition of the DNR’s and LNR’s claims to them. He might delay such military operations to attempt to coerce Ukraine into making these or other concessions with the threat of attack hanging over it, but his speech on February 22 significantly increased the likelihood of a Russian military operation into unoccupied eastern Ukraine.

Putin secured unrestricted formal parliamentary authorization to deploy Russian forces abroad but falsely claimed Russia has not yet deployed forces to the DNR and LNR or decided to do so. Russia’s Federation Council, the Russian senate, approved an authorization for Putin to use Russian forces abroad prior to his speech.[2] The authorization grants Putin the authority to determine the “number of formations of the Russian Armed Forces… the areas of their operations… the tasks facing them… and the period of their stay outside [Russia].” The authorization stipulates no restrictions on the size, timing, duration, or purpose of Russian military operations abroad.

Putin framed the authorization to deploy forces as completing Russia’s ”responsibilities” to the DNR and LNR through the mutual assistance treaties signed on February 21. However, the resolution does not mention the DNR and LNR, leaving open the implication that it is also an authorization for a broader attack on Ukraine. In a press conference following his speech, Putin falsely claimed that Russian forces have not yet deployed to Donbas and Russia “cannot predict the situation.” Social media reports and Reuters reporting the night of February 21-22 reported Russian armored columns deploying into the DNR and LNR.[3] The Kremlin may wait to acknowledge its deployment of forces to the DNR and LNR until it is ready to begin further offensive operations against Ukraine.

Putin’s demands for Ukrainian concessions are now broader than those that were included in the Minsk II Accords, which Putin has overtly abandoned.  He falsely claimed that Ukraine killed the Minsk II agreement, the diplomatic framework for ceasefires in Donbas and resolving the war in Ukraine since 2015, long before Russia’s recognition of the DNR and LNR. Putin claimed Russia could not wait any longer to recognize the DNR and LNR due to a Russian-fabricated Ukrainian “genocide” against Russian speakers in Donbas. Putin said Russia has recognized the DNR’s and LNR’s constitutions, including their claims to the entirety of Donetsk and Luhansk oblasts. Putin stated he hopes to resolve this issue through talks between Ukraine and the DNR/LNR, but that these talks are impossible due to Ukrainian military activity. 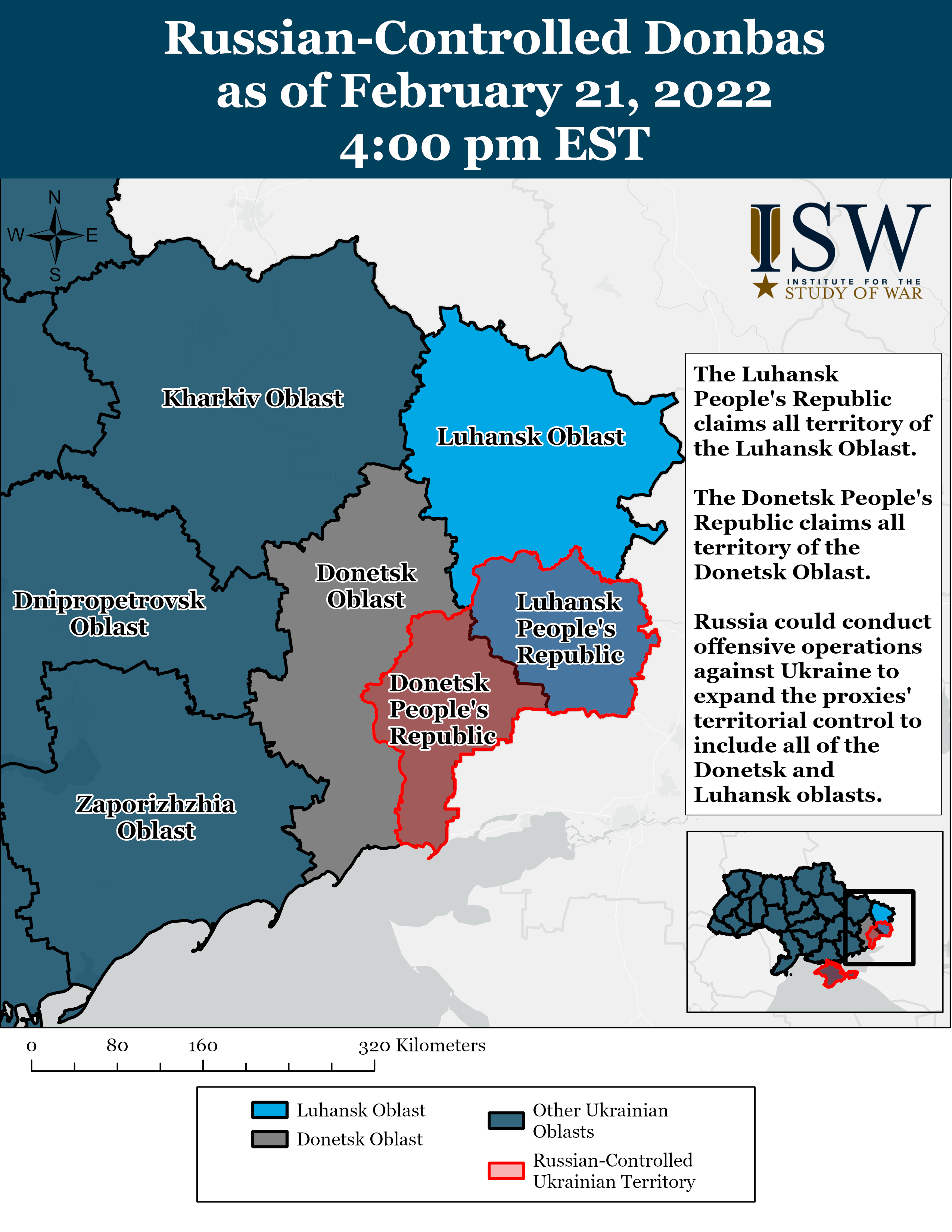 Putin has replaced Minsk II’s demands of Ukraine with his own. To halt further escalations, he said, Ukraine must:

Putin’s demands and recognition of DNR and LNR claims to Ukrainian-held territory is a soft declaration of war against Ukraine. Putin will likely continue to phase his operations—gauging Ukrainian and Western responses to his February 22 speech before initiating his next course of action. Putin will likely seize the remainder of the Ukrainian-controlled Donetsk and Luhansk Oblasts, probably through a mechanized invasion accompanied by an air and missile campaign across unoccupied Ukraine as ISW has previously forecasted.[4]  He can choose various pretexts for such an attack depending on the informational conditions he can set in the coming hours and days. ISW will continue to monitor and report on those conditions and update this forecast as appropriate.