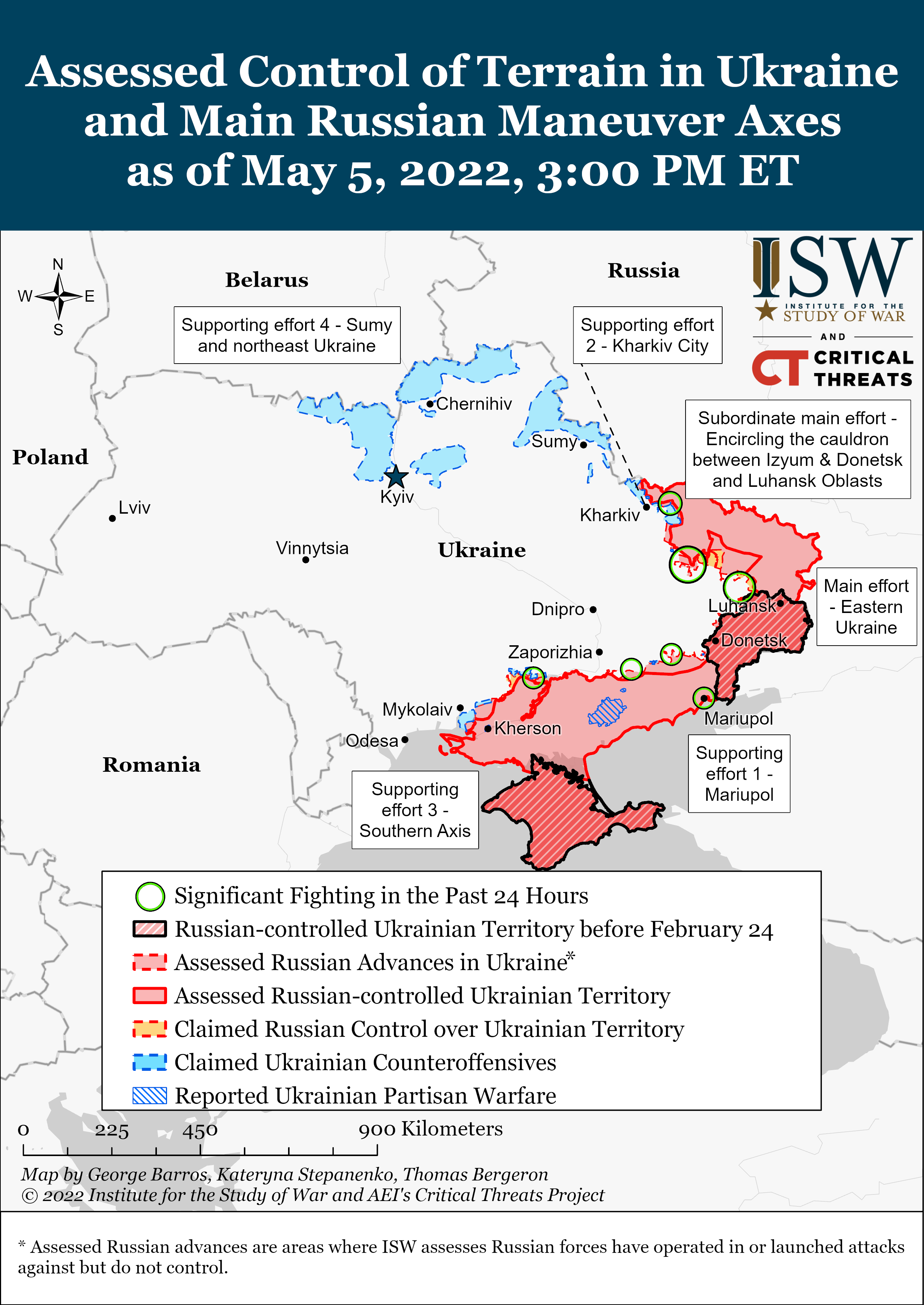 ISW has updated the structure of its discussion of the primary efforts Russian forces are currently engaging in. The main Russian effort is concentrated in eastern Ukraine and includes one subordinate main effort and four supporting efforts. The subordinate main effort is the encirclement of Ukrainian troops in the cauldron formed between the Izyum-Slovyansk highway and the Kreminna-Rubizhne-Popasna frontline in Luhansk. The four supporting efforts are: completing the seizure of Mariupol, retaining pressure on Kharkiv City, holding occupied territory on the Southern Axis, and threatening northeastern Ukraine from Russian and Belarusian territory.

Russian forces continued ineffectual offensive operations in southern Kharkiv, Donetsk, and Luhansk Oblasts without securing any significant territorial gains in the past 24 hours. The Pentagon assessed that Russian forces have not been able to make further advances due to their inability to conduct offensive operations far from their ground lines of communication (GLOCs) along highways, as ISW previously assessed, and muddy terrain.[1] Russian GLOCs supporting the Izyum axis likely run from the Russian border to Kupyansk and Vovchansk, and local Kharkiv civilian authorities reported additional Russian reinforcements moving through these settlements towards the front line as of May 5.[2] Russian forces are reportedly suffering losses in stalled attacks along the Izyum axis, with the Ukrainian General Staff reporting that elements of the 4th Tank Division and the 106th Airborne Division withdrew to Russia after sustaining heavy losses in the past several days.[3]

Russian forces conducted unsuccessful attacks in Lyman, Severodonetsk, and Popasna, and maintained shelling along the line of contact in Donetsk and Luhansk Oblasts.[4]  Russian forces also used thermobaric munitions against Ukrainian positions in Lyman and are unsuccessfully attempting to leverage massed artillery fire to break through Ukrainian defenses.[5] Russian forces targeted grain facilities in Rubizhne and Soledar, a settlement located approximately 30 kilometers from Popasna, likely to deprive Ukrainian forces and civilians of supplies.[6] The Donetsk People’s Republic claimed to have seized Troitske (a village approximately 25 kilometers from occupied Horlivka) on May 5, but social media imagery confirmed that Ukrainian artillery inflicted heavy damage on Russian munitions depots, tanks, and armored personnel carriers in the area.[7] 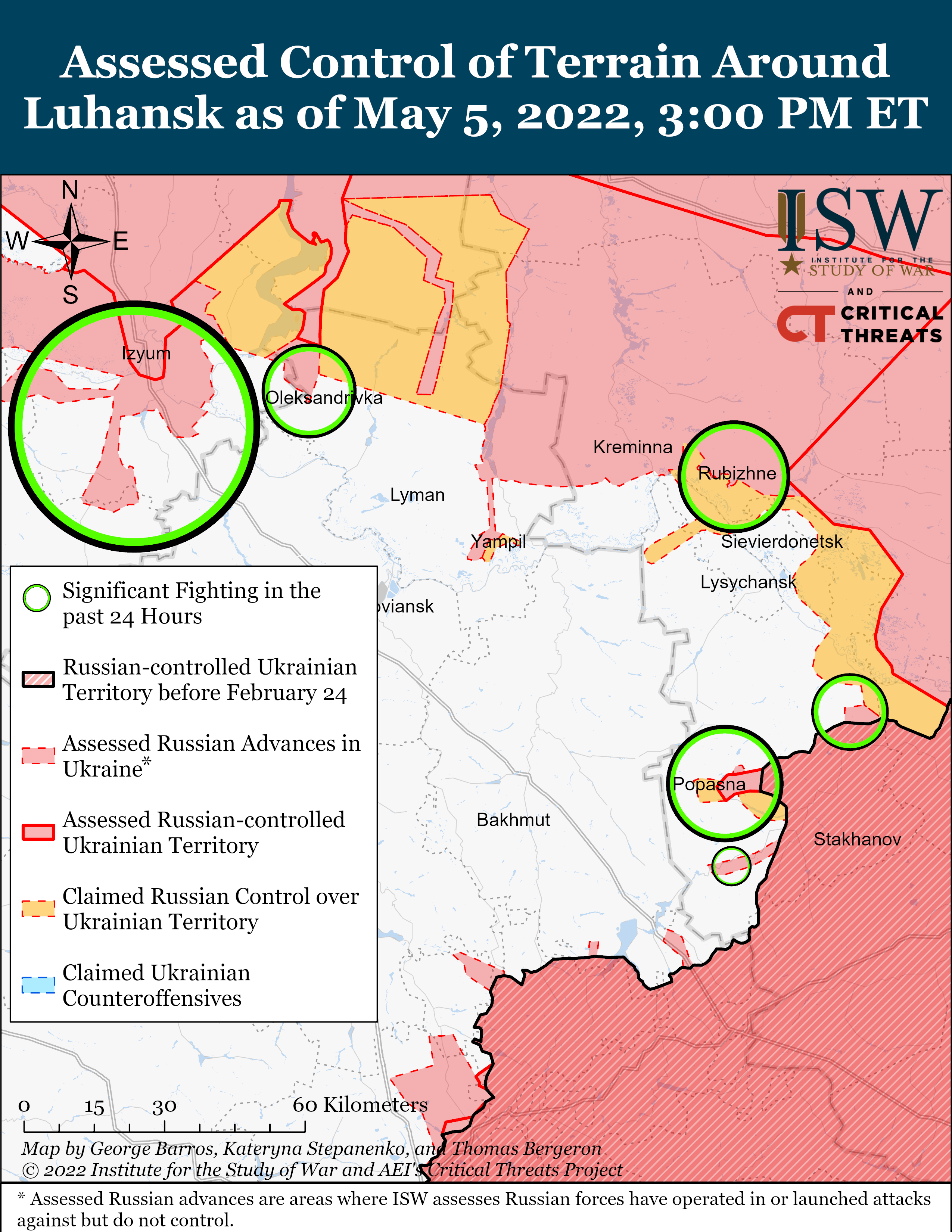 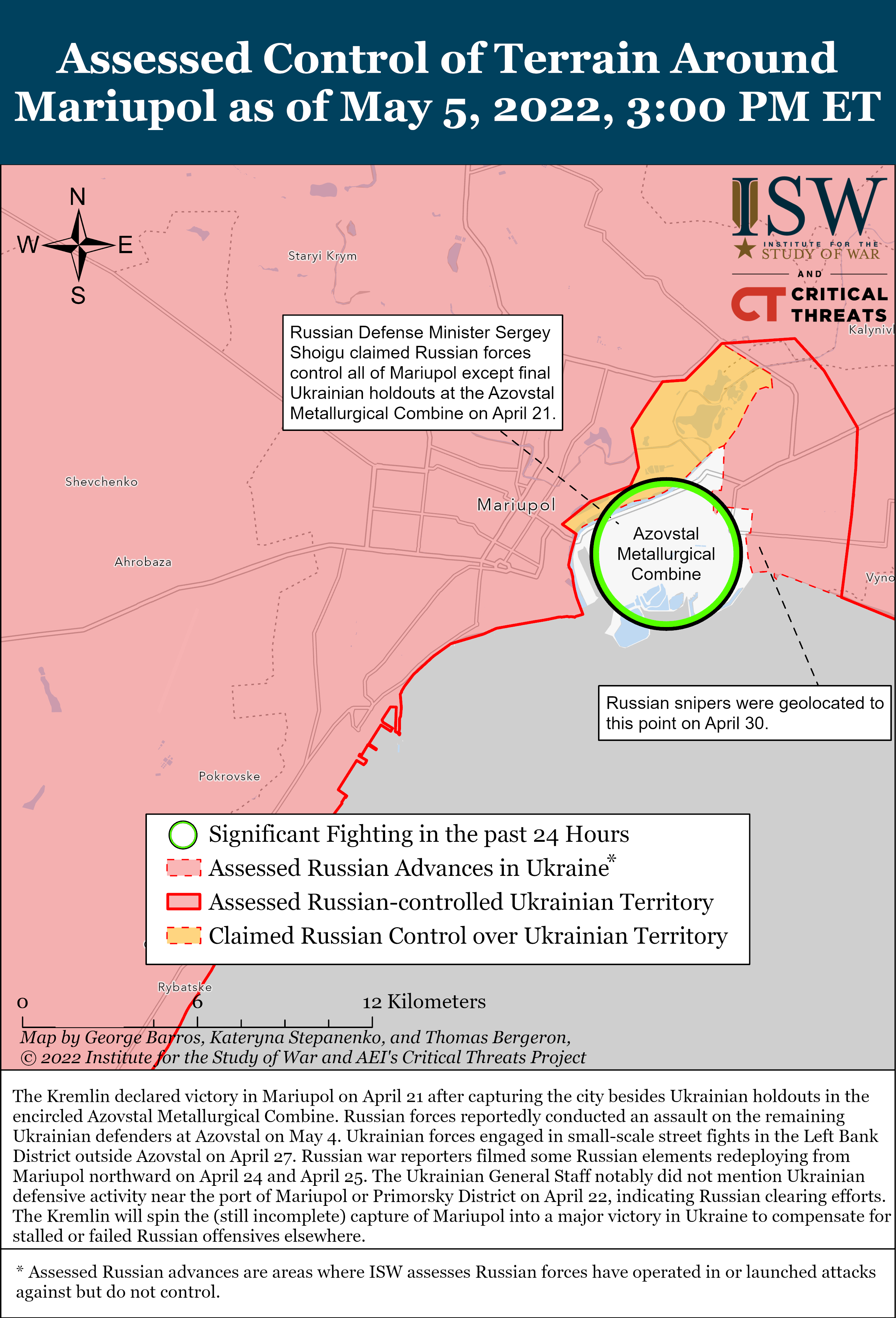 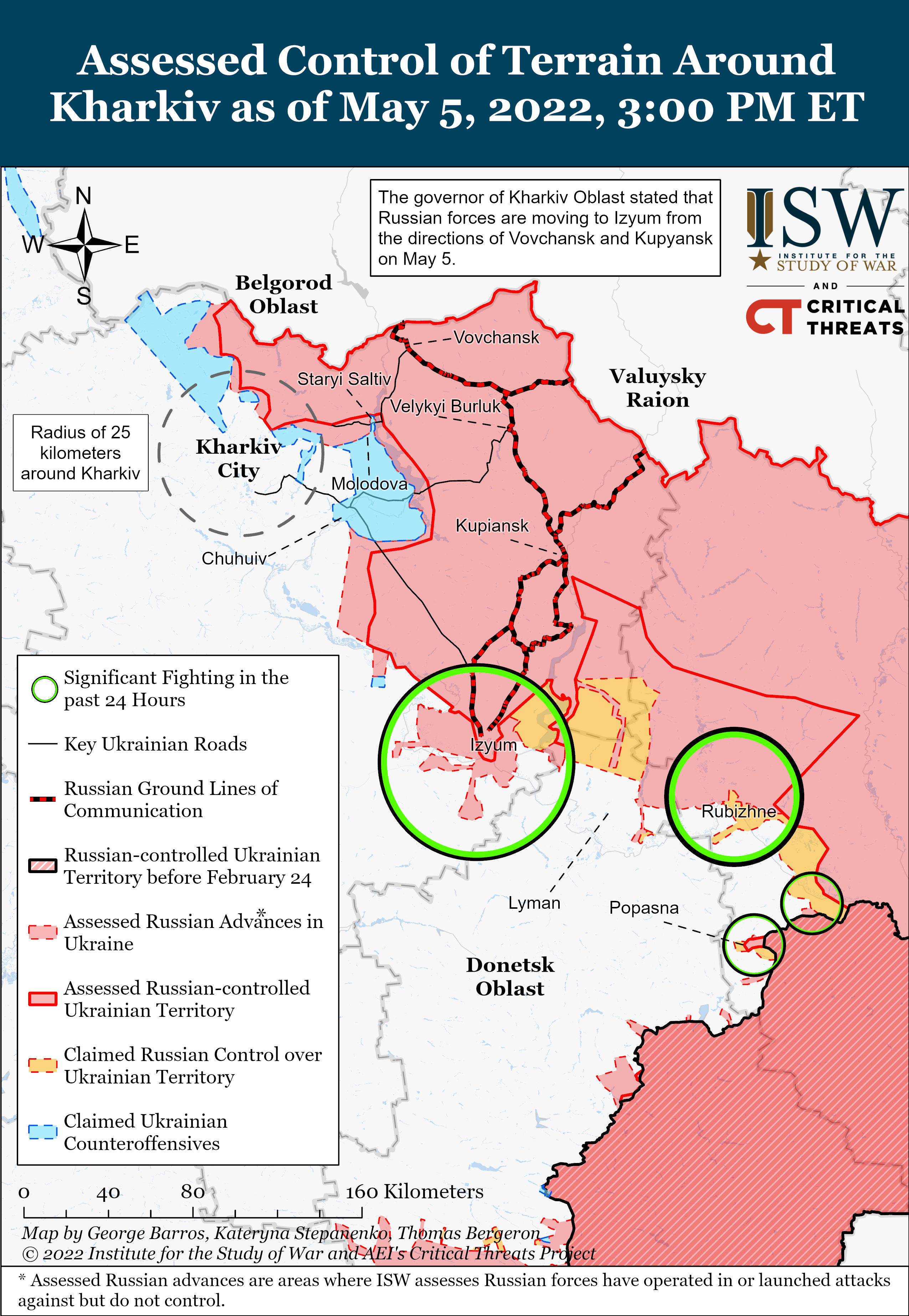 Russian forces continued offensive operations toward Zaporizhia City but did not conduct any attacks in Kherson and Mykolaiv oblasts on May 5.[17] Ukraine’s Zaporizhia Oblast Military Administration reported that Russian forces attacked Hulyaipole, near the Donetsk Oblast border, throughout the day.[18] The Administration additionally stated up to 13 battalion tactical groups are concentrated on this line of advance toward Zaporizhia City or the Donetsk Oblast administrative borders from the west, though these battalion tactical groups (BTGs) are almost certainly understrength.[19] Zaporizhia authorities noted that Russian forces operating in the region are more cautious than during the initial stage of the war and are increasing their use of reconnaissance assets.[20]

Russian forces did not conduct offensive operations in Kherson or Mykolaiv oblasts.[21] The Ukrainian General Staff reported that Ukrainian forces liberated unspecified villages along the border between Kherson and Mykolaiv oblasts on May 5, but ISW cannot independently these claims.[22] Ukraine’s Operational Command South reported that Ukrainian forces successfully pushed Russian forces around 20 kilometers away from Mykolaiv City, possibly indicating that these liberated villages are in northwestern Kherson Oblast, though we have previously assessed that Ukrainian forces have taken most territory within this 20km arc and have not updated our maps with this Ukrainian claim.[23] Russian authorities in occupied Crimea claimed on May 5 that Russian forces restored railway connections between Crimea and Kherson Oblast for cargo and passenger trains, likely to improve logistics on the southern front.[24] 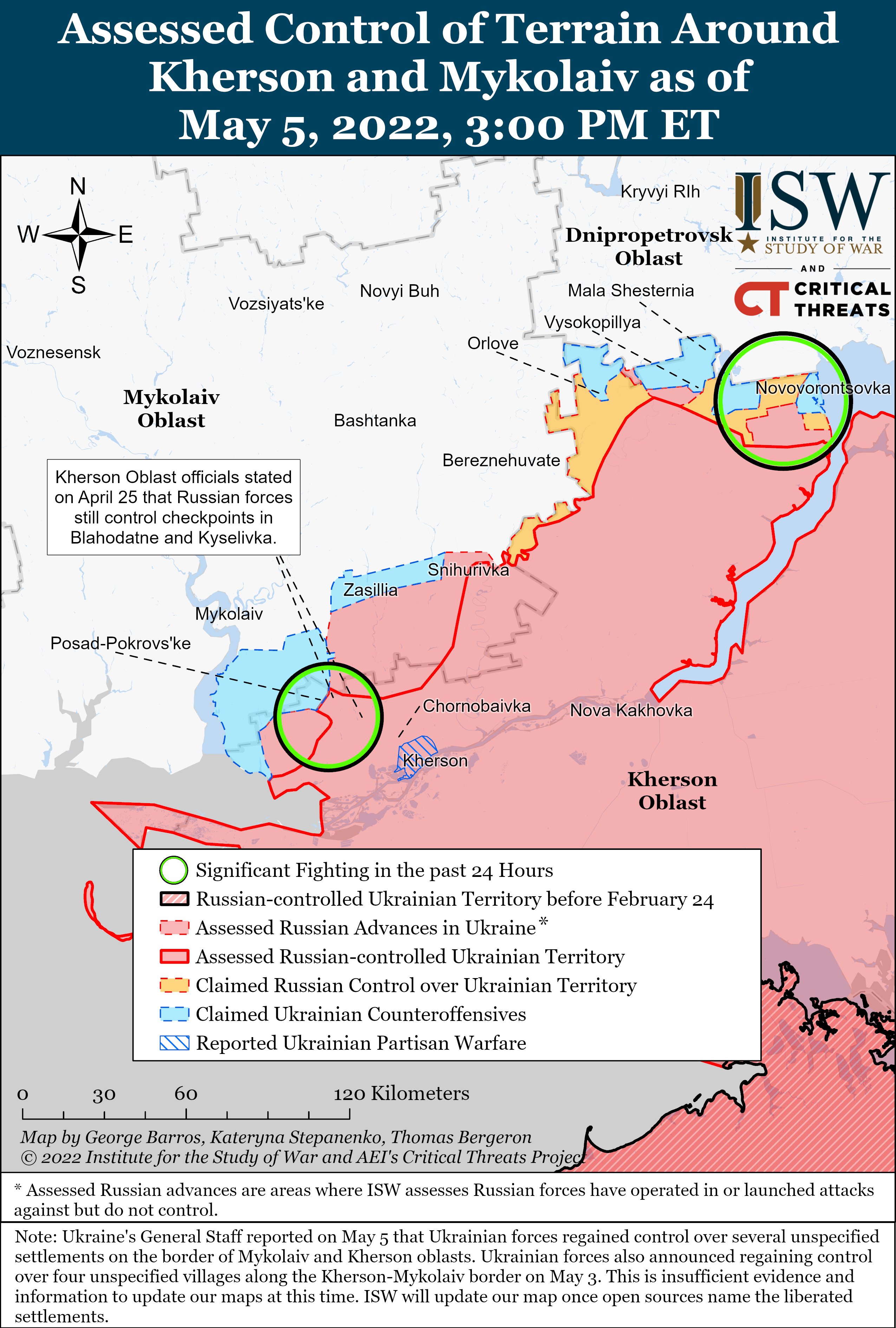 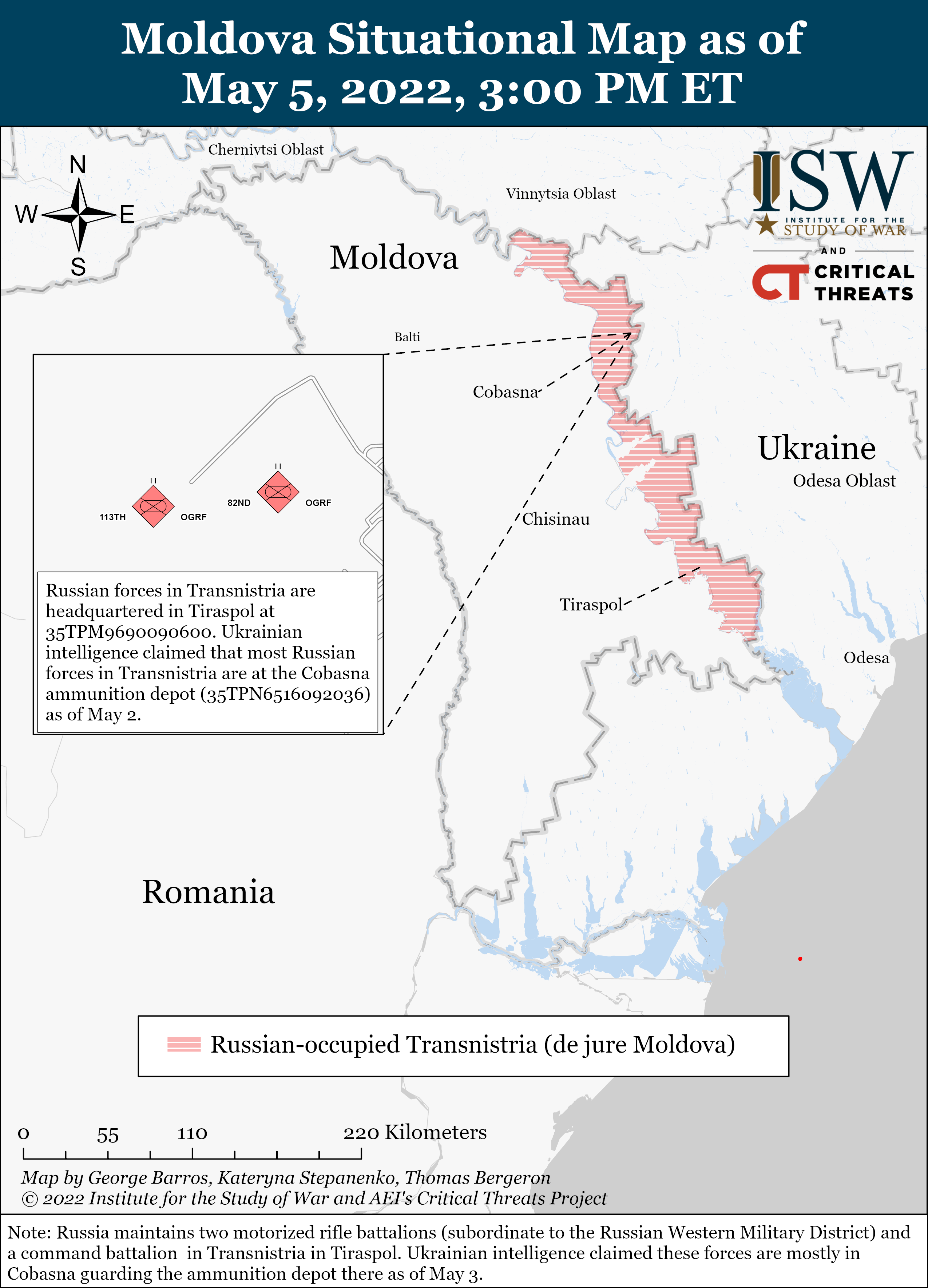