Movements and activities of elements of Russia’s 41st Combined Arms Army (CAA) and 1st Guards Tank Army in late October are unlikely to be preparations for an offensive against Ukraine, but do pose longer-term challenges to Russia’s neighbors and NATO. The Washington Post reported on October 30 that a “buildup” of Russian troops near the Ukrainian border concerned US and European officials.[1] The report suggested that the Russian deployments are similar to those carried out on Ukraine’s border in March-April 2021. Open-source reporting does not support the assessment that Russia has moved any additional forces closer to the Ukrainian border or that a Russian offensive against Ukraine is imminent, however. The Ukrainian Ministry of Defense stated on November 1 it has not observed any transfers of Russian units, weapons, or equipment to the Ukrainian border.[2] 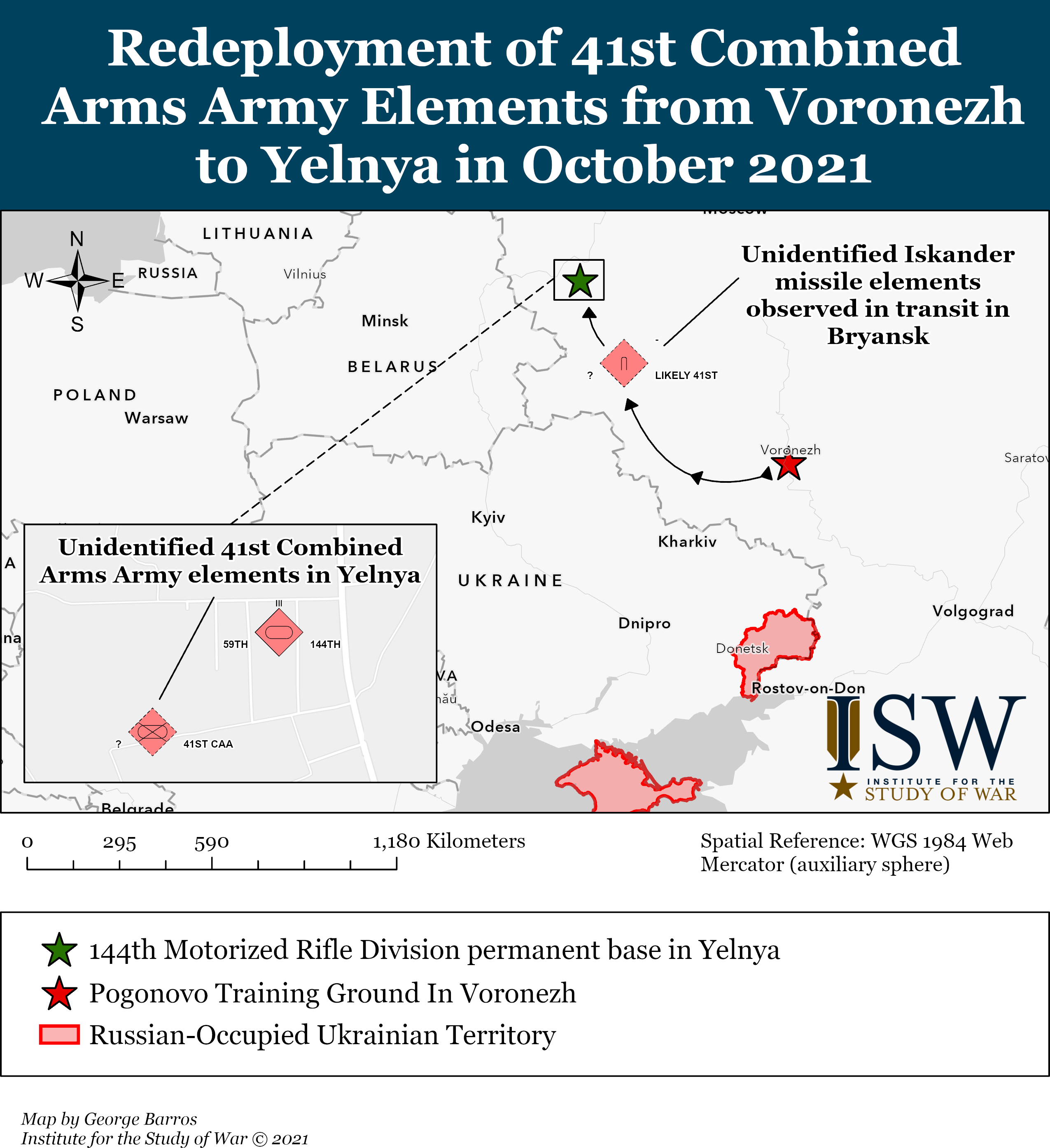 The 41st CAA elements are likely redeploying from temporary positions in Voronezh to permanent basing facilities in Yelnya, from which they could support several operational directions. These units had been in field camps near Voronezh rather than in hard-stand permanent bases. The Russian military was never likely to leave units or equipment in such facilities through the winter, making the movement of these units unsurprising in itself. Their new position in Yelnya is co-located with permanent basing facilities occupied by the 59th Tank Regiment, therefore likely better suited to house troops and maintain equipment over the winter. The movement of these elements of the 41st CAA to the base at Yelnya rather than back to their original home bases in Siberia, however, is noteworthy. It suggests that they will be permanently transferred to the Western Military District (WMD) and remain on the Ukrainian and/or Belarusian border for a time. Yelnya may not be their final destination within the WMD, however.

The Washington Post article rightly noted important inflections in Moscow’s information operations over the course of 2021 and in recent days and weeks. These changes in tone and rhetoric could presage military operations against Ukraine, although likely on a much more limited scale and focused in eastern Ukraine rather than in the areas through which the elements of the 41st CAA have moved. They are most likely related to Kremlin posturing in advance of the next Normandy Format meeting, however, especially since no open-source evidence of Russian military buildups near eastern Ukraine has emerged.

The Kremlin exploited two Ukrainian actions in late October to advance a false narrative of a potential Ukrainian offensive against occupied Donbas and claimed it will protect “Russian citizens” (rather than “ethnic Russians”) in Donbas for the first time.

This recent series of Russian redeployments and rhetorical escalations is unlikely to be preparation for an imminent Russian offensive against Ukraine. It does, however, set conditions for increased pressure on Kyiv and also on Belarus and merits continued close but sober observation. The frequency of major Russian military exercises and redeployments increased in 2021. Several Russian actions throughout the year have sparked worries of major offensive actions that did not occur. This pattern of increasingly frequent Russian maneuvers and rhetorical escalations will likely continue, and it will be easy for the West to fall into one of two traps—overly alarmist warnings of imminent Russian offensives that are unlikely to occur, or complacency and inattention to Russian actions. The Kremlin likely intends to produce both these effects, allowing it to intimidate Ukraine and NATO and simultaneously establish a new normal of continuous Russian exercises, obscuring dangerous moves. The West should continue to monitor, publicly discuss, and evaluate Russian actions, even if they are not worst-case scenarios.

ISW will continue to monitor and report on Russian actions aimed at Ukraine. ISW does not currently forecast a Russian offensive against Ukraine is imminent, but is watching for the following indicators of preparations for a further escalation.

Indicators of a potential Russian military operation against Ukraine:

[7] https://structure.mil dot ru/structure/okruga/west/news/more.htm?id=12390789@egNews; The Soviet military historically employed “shock” units to spearhead offensives. Shock armies received high proportions of artillery, engineers, and other assets intended to break defensive positions, but lacked mobility and sustainability. The Russian military revived the “shock” designation in 2017 as an honorific reward for units that demonstrate high readiness and capabilities, without any changes in the equipment and doctrinal purpose of units designated “shock.” Elements of the 1st Guards Tank Army are carrying out unspecified tests to earn the shock designation. For more information on the past and present use of the “shock” designation, see: https://nationalinterest.org/blog/the-buzz/russia-bringing-back-its-worl....

[19] A former representative of the Luhansk People’s Republic militia accused Ukraine of preparing for either a full-scale military operation or an escalation on the front line and accused Russia of not protecting Donbas on October 31. The Kremlin media apparatus has not adopted this narrative as of this writing. The Kremlin can fabricate information conditions to attack Ukraine if the Kremlin decides to. https://www.mk dot ru/politics/2021/10/31/veteran-lnr-o-zadache-korpusov-v-sluchae-voyny-proderzhatsya-tri-dnya.html; https://www.understandingwar.org/backgrounder/russia-review-september-1-....