Ukraine’s sinking of the Moskva was a significant event that has likely triggered intensified Russian air and missile attacks in retaliation, but the decisive operations of this phase of the war will still be conducted on the ground in eastern Ukraine. The commitment of the Black Sea Fleet’s naval infantry to the fight around Mariupol some weeks ago meant that Russian naval operations would play a supporting role in the conflict. Increased Russian air and missile attacks are also unlikely to have a decisive impact on the outcome of the war, since there is no reason to assess that Russia has been holding enough air and missile capability in reserve to tip the balance if it is now committed. This report, and likely future reports as well, will thus remain focused on the ground operations, especially those in eastern Ukraine.

Russian forces continued to amass troops around Izyum in preparation for continuing offensive operations in eastern Ukraine. The Russians continued small-scale attacks in the vicinities of Izyum, Popasna, and the area around Rubizhne and Severodonetsk—sometimes with artillery, sometimes with mechanized forces. These attacks have not made significant gains so far. It is unclear if they are part of a rolling offensive operation into which Russian reinforcements will be fed as they become available or if they are setting conditions for a larger-scale, better-coordinated offensive that will start soon.

The specific terrain on which battles in eastern Ukraine will be fought may constrain the Russians’ ability to take advantage of the number of forces they are amassing for the attack. Eastern Ukraine is famous for being superb terrain for large-scale mechanized maneuver because of the World War II campaigns of the Wehrmacht and the Red Army. It is far from clear, however, that Russian forces will find it much more conducive to rapid decisive mechanized operations than other parts of the theater. The Russians have struggled repeatedly to seize built-up areas rapidly or even to reduce them once encircled. They will have to seize several significant population centers to achieve their apparent objectives in Donetsk and Luhansk oblasts, however, including Severodonetsk, Rubizhne, Lysychansk, Slovyansk, and Kramatorsk, as well as several smaller towns. The difficulties they have encountered taking Rubizhne do not bode well for their rapid success against other built-up areas. The ground itself is also challenging as it is crisscrossed by many small water features and, at the moment, still very muddy. The reinforcements the Russians are bringing into this part of the theater will help, of course, but large numbers of much fresher Russian troops struggled to take relatively small population centers north, west, and northeast of Kyiv even before getting into the Kyiv suburbs proper. The Russians must take the major population centers in Donetsk and Luhansk, however, if they are to achieve the operation’s stated goals.

Russian forces will likely continue operating along three primary axes of advance in Donbas: from Izyum south via Slovyansk toward Russian-controlled Donetsk Oblast near Debaltseve; from Rubizhne and Severodonetsk southwest toward the Izyum-Debaltseve highway; and from Popasna west toward that highway. They may open an additional axis of advance from near Donetsk City to the north toward Kramatorsk as well, according to the Ukrainian General Staff.[1] The Russian main effort currently appears to be from Izyum southeast along the highway to Slovyansk. The drive west from Popasna is presumably meant to reach the Izyum-Debaltseve highway, possibly setting conditions to encircle or drive off Ukrainian forces defending against a Russian advance from the Debaltseve area to the northwest. The purpose of the direct assaults on Severodonetsk and Rubizhne is less clear. The Russians may be trying to seize those cities as part of the objective to seize Donetsk and Luhansk Oblasts, rather than waiting until they have been encircled and trying to reduce them at that point. They may alternatively be seeking to fix Ukrainian forces in that northeastern sector of the salient the Russians intend to encircle. The general pattern of operations and apparent movements of Russian reinforcements suggest that the drive from Izyum to the southwest will be the main effort in this part of the theater but that the Russians will continue to attack on multiple axes that are not immediately mutually supporting.

Ukrainian officials report that Russia has concentrated as many as 22 battalion tactical groups (BTGs) in the vicinity of Izyum, but the Russians will struggle to take advantage of that force concentration if they cannot open up parallel axes of advance—something they have notably struggled to do in other parts of the theater. Russian forces are apparently attempting to drive southwest from Izyum toward Barvinkove, which could allow them to open up an axis of advance in addition to the main Izyum-Slovyansk highway. But Barvinkove is a large enough settlement to delay the Russian advance if Ukrainian forces hold it, and the route from Izyum to Barvinkove is not really parallel to the Izyum-Slovyansk highway—Barvinkove is roughly 50 kilometers west of Slovyansk. Taking Barvinkove does not cut the only Ukrainian ground line of communication (GLOC) to Slovyansk, moreover, as another main GLOC to Slovyansk from the west runs through Kramatorsk, about 45 kilometers southeast of Barvinkove.

The individual Russian offensives in the east are thus unlikely to proceed dramatically more successfully than similar operations around Kyiv unless the Russians change their operational patterns significantly. The Russians could overwhelm the Ukrainian defenders by the sheer number of different axes of advance forcing the Ukrainians to spread themselves too thinly. But the Ukrainians’ demonstrated will and ability to hold much larger Russian forces at bay in built-up areas for a considerable time suggests that many if not most or even all of these Russian drives will stall. This discussion does not take account of the quality and physical and psychological state of the Russian forces, which we have considered in detail in previous reports, and which makes a sudden dramatic Russian offensive success even less likely. 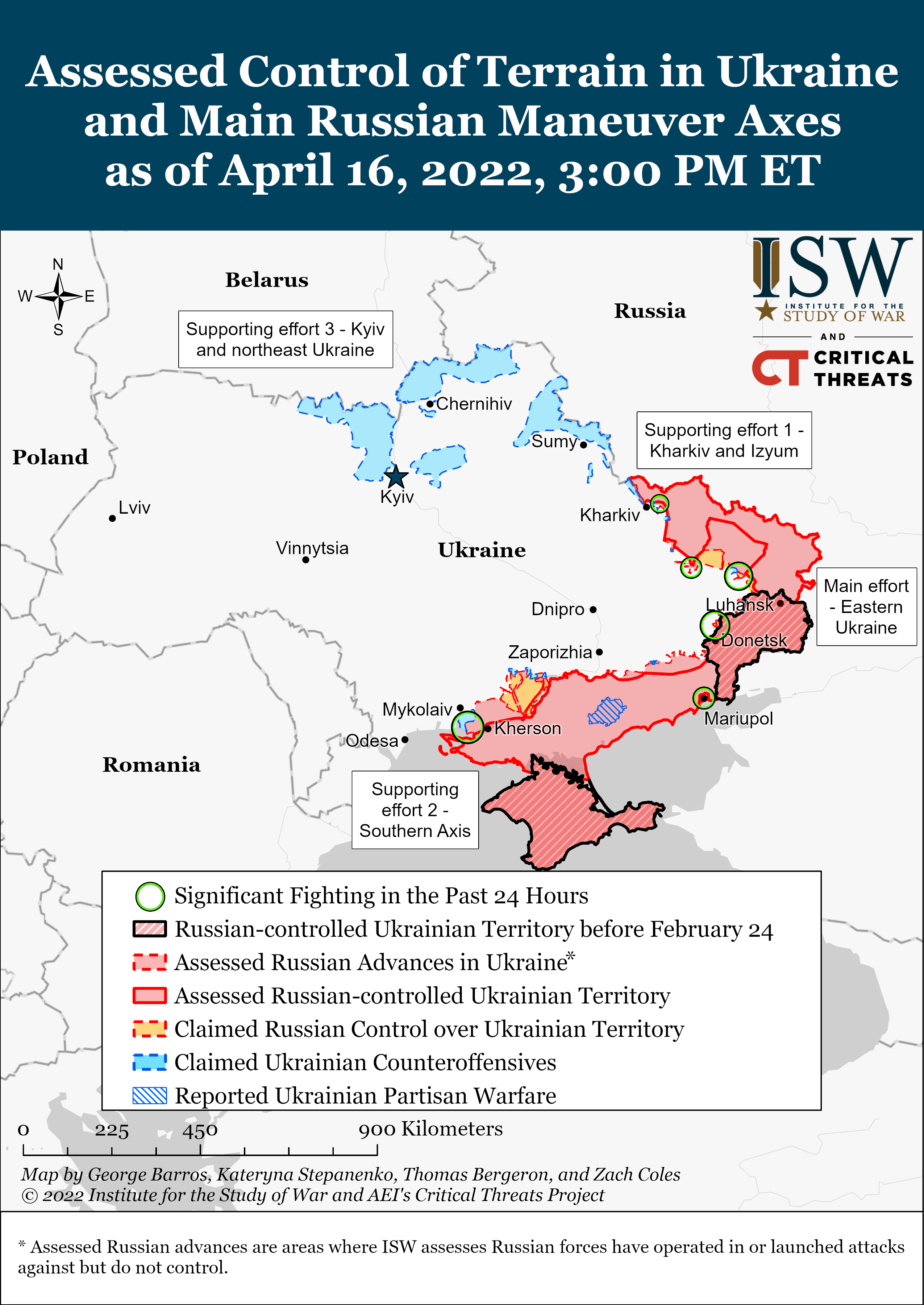 Ukrainian advisor to the mayor of Mariupol Petro Andryushenko claimed that DNR head Denis Pushilin opened an office of the United Russia party in Mariupol on April 15.[7] This action likely indicates that the DNR is preparing to begin governing Mariupol (or what remains of it) soon. Andryushenko further claimed that Russian “filtration” measures are reaching a crescendo in Mariupol and that the Russians have announced a complete lockdown of the city on Monday, April 18, to allow them to complete the “filtration” process.[8] The Battle of Mariupol and the fight in Donbas generally have cost the Russians and proxies dearly, however. Social media confirmed that the funeral of the deputy commander of the Russian 8th Combined Arms Army, Major General Vladimir Petrovich Frolov, was held on April 16.[9] 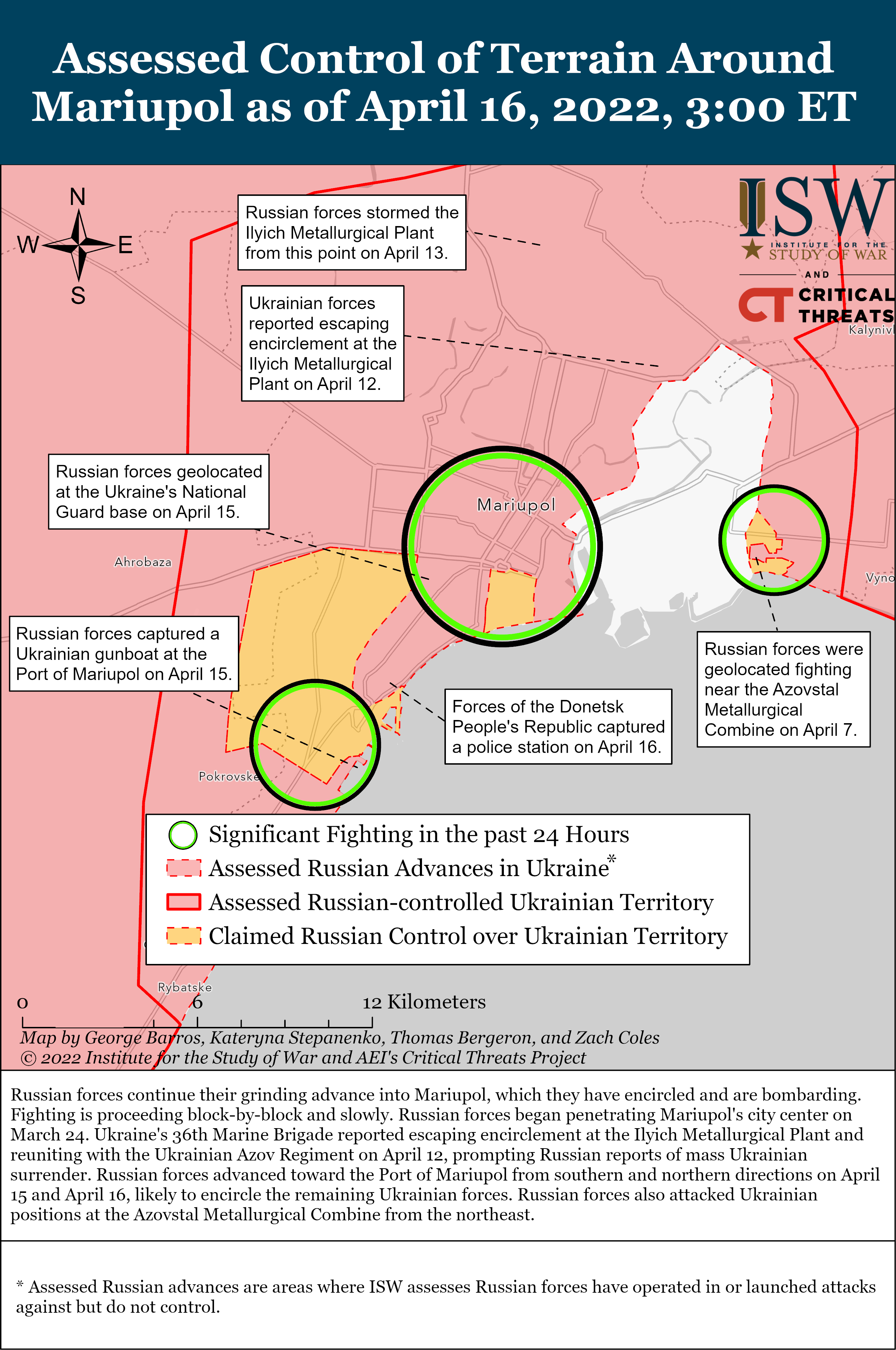 Russian troops continued shelling Severodonetsk, Rubizhne, and Popasna, and Russian troops made small tactical attacks around Popasna on April 15.[10] The shelling has destroyed much of the cities’ infrastructure.[11] Russian forces made no significant territorial gains in these areas in the past 24 hours, however.

The Ukrainian General Staff reported artillery strikes in and around Avdiivka on April 16, possibly in preparation for an offensive operation in that area.[12] Avdiivka is just north of Donetsk City on the N20 highway toward Kramatorsk, which lies about 70 kilometers to the northwest. A Russian advance along this axis could complement the drive from Izyum to the southeast via Slovyansk toward Debaltseve. 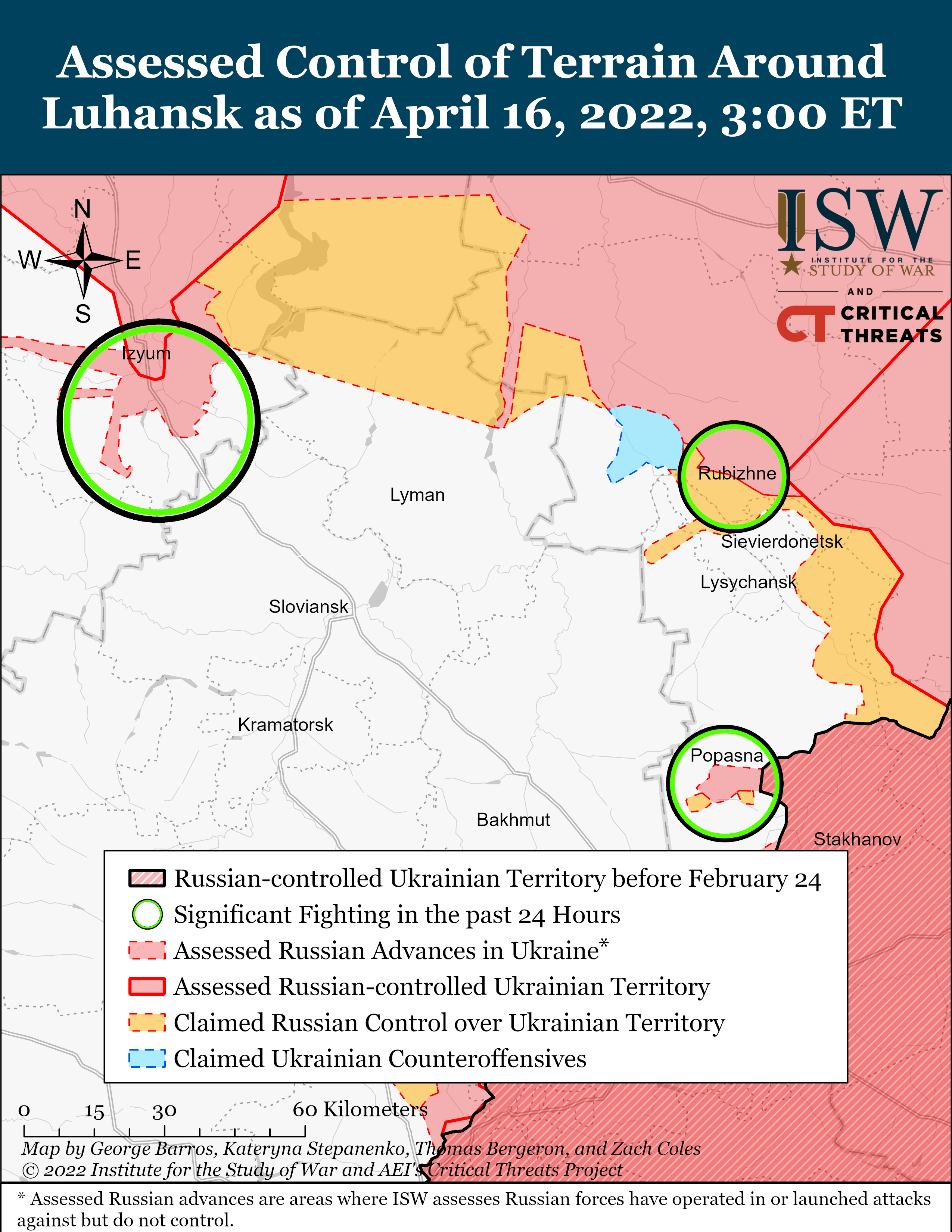 Russian forces continued their build-up in and around Izyum over the last 24 hours, including deploying elements of units that had fought around Kyiv into the area. The Ukrainian General Staff reported that elements of the 6th and 20th Combined Arms Armies as well as of the 1st Guards Tank Army that had been operating in the Kharkiv and eastern Ukraine area for some time were being reinforced by elements of the 35th and 36th Combined Arms Armies and the 106th Airborne Division, all of which fought and suffered heavy losses around Kyiv.[13] The General Staff claimed that elements of the 68th Army Corps of the Eastern Military District were also operating in eastern Ukraine. The forces of the 68th Corps likely came from the 39th Separate Motorized Rifle brigade, based on Sakhalin Island.[14] Those troops likely have not previously participated in the fighting in Ukraine, as the Ukrainian General Staff claimed that their scheduled rotation into Syria was canceled to facilitate their entry into the war.[15] The Ukrainian General Staff claims that Russian forces have amassed as many as 22 BTGs around Izyum for operations toward Slovyansk and Barvinkove.[16]

Actual combat activity on the Izyum axis was limited, however, with the Ukrainian General Staff reporting one significant attempt to drive on the village of Dovgenske, roughly 20 kilometers south of Izyum on the Slovyansk highway, that the Ukrainians claim to have repulsed.[17]

Russian forces around Kharkiv City generally held their positions, although the commander of Ukraine’s Joint Operational Headquarters claimed on April 16 that Ukrainian forces regained some territory around the city.[18]

There has been no significant change around Kherson in the past 24 hours. 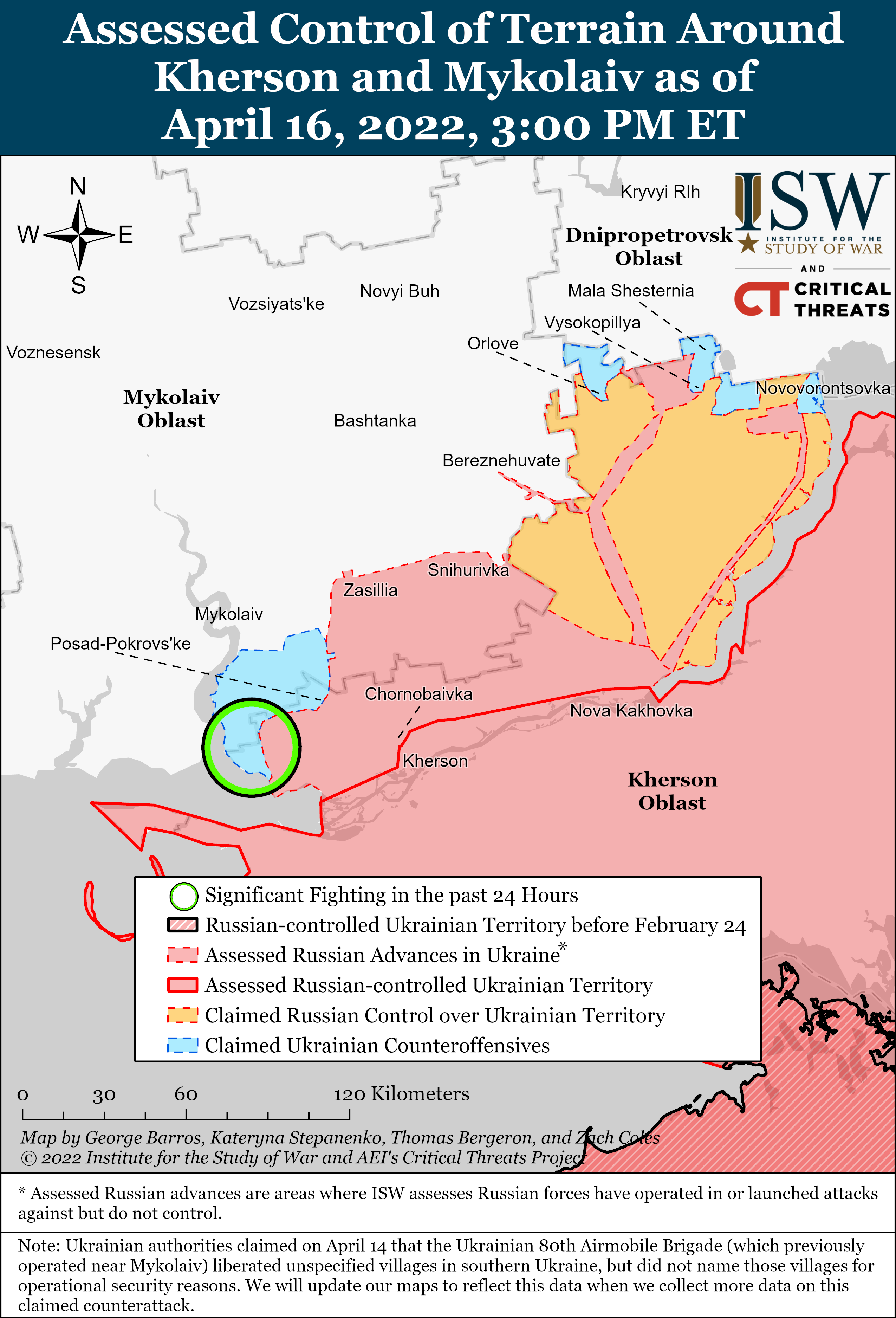