Continuing Russian operations along their new main effort in eastern Ukraine made little progress on April 2, and Russian forces likely require some time to redeploy and integrate reinforcements from other axes. Ukrainian forces repelled likely large-scale Russian assaults in Donbas on April 2 and inflicted heavy casualties. Russian forces continued to capture territory in central Mariupol and will likely capture the city in the coming days. Russian units around Kyiv and in northeastern Ukraine continued to successfully withdraw into Belarus and Russia, and heavy mining in previously Russian-occupied areas is forcing Ukrainian forces to conduct slow clearing operations.

However, the Russian units withdrawn from northeastern Ukraine for redeployment to eastern Ukraine are heavily damaged. Russian forces likely require an extensive operational pause to refit existing units in Donbas, refit and redeploy reinforcements from other axes, and integrate these forces—pulled from several military districts that have not yet operated on a single axis—into a cohesive fighting force. We have observed no indicators of Russian plans to carry out such a pause, and Russian forces will likely fail to break through Ukrainian defenses if they continue to steadily funnel already damaged units into fighting in eastern Ukraine. 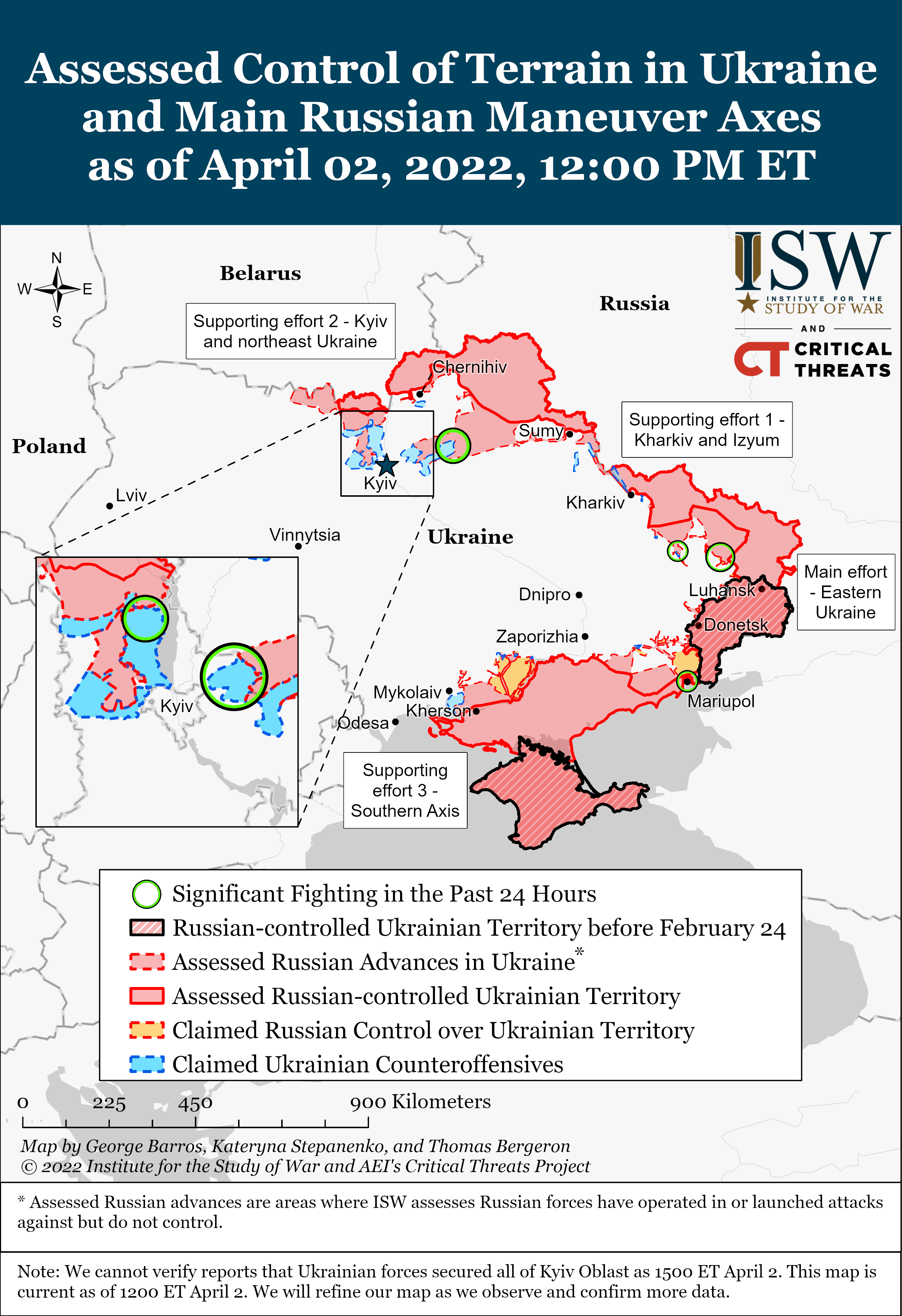 The Ukrainian General Staff reported on April 2 that out of the 75 Russian Battalion Tactical Groups (BTGs) it assesses have participated in operations in Ukraine, 16 BTGs have been “completely destroyed” and 34 more are currently combat ineffective and recovering.[1] ISW cannot independently confirm these numbers, but Russian forces will be unlikely to be able to resume major operations if two-thirds of the BTGs committed to fighting to date have been rendered temporarily or permanently combat ineffective.

The Ukrainian General Staff stated on April 2 that Belarusian forces are increasing the pace of ongoing training, but that Ukraine does not observe any indicators of preparations for a Belarusian offensive.[2] Belarusian social media users observed Belarusian air defenses redeploying towards Luninets and Slutsk (in central Belarus) on April 2, but no Belarusian forces were observed moving near the Ukrainian border.[3] ISW assesses Belarusian President Lukashenko will continue to resist Russian efforts to involve Belarus in the war in Ukraine. 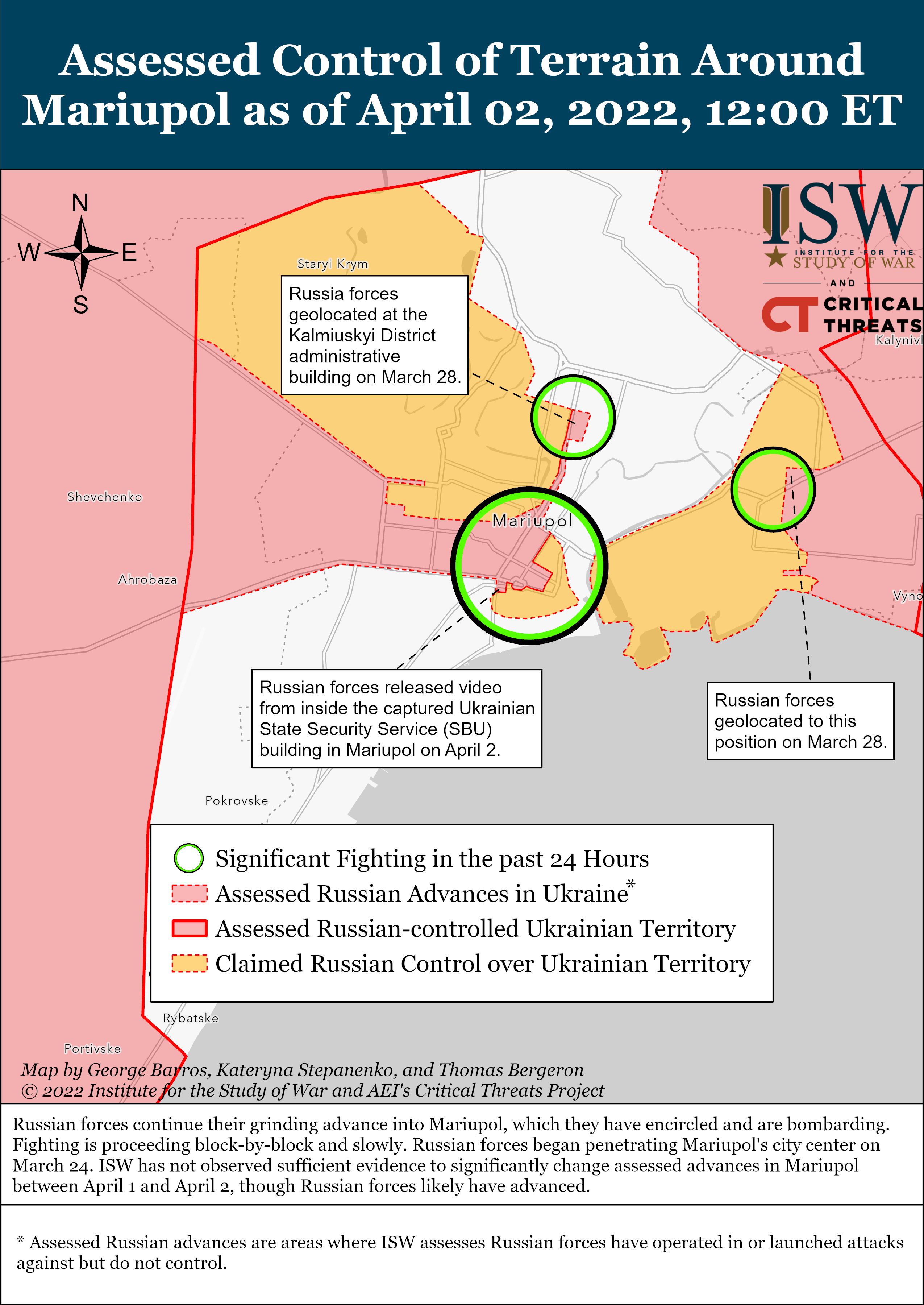 Ukrainian forces continued to repel Russian assaults in Donetsk and Luhansk Oblasts on April 2. The Ukrainian General Staff reported at 6:00 am local time on April 2 that Ukrainian forces repelled nine enemy attacks in the past 24 hours, destroying eight tanks, 44 armored vehicles, 16 unarmored vehicles, and 10 artillery systems.[6] These numbers are far higher than the daily totals of destroyed Russian vehicles claimed by Ukrainian forces, which are typically less than ten per day. Ukrainian forces may have repelled significant Russian assaults in the last 24 hours and inflicted heavy casualties, but ISW cannot independently confirm these claims. Russian offensive operations in Luhansk Oblast are centered on Popasna and Rubizhne, and operations in Donetsk Oblast are concentrated on Marinka, though Russian forces reportedly launched unsuccessful attacks all along the line of contact in the past 24 hours.[7]

Ukrainian forces continue to successfully repel Russian assaults in Donbas. Russian forces will likely require an operational pause to reconstitute their existing forces in the region and integrate reinforcements currently redeploying from northern Ukraine to mount an effective offensive. However, we have seen no indication of a Russian operational pause on the Donbas axis, and they appear likely to further bleed their forces with ineffective daily attacks. 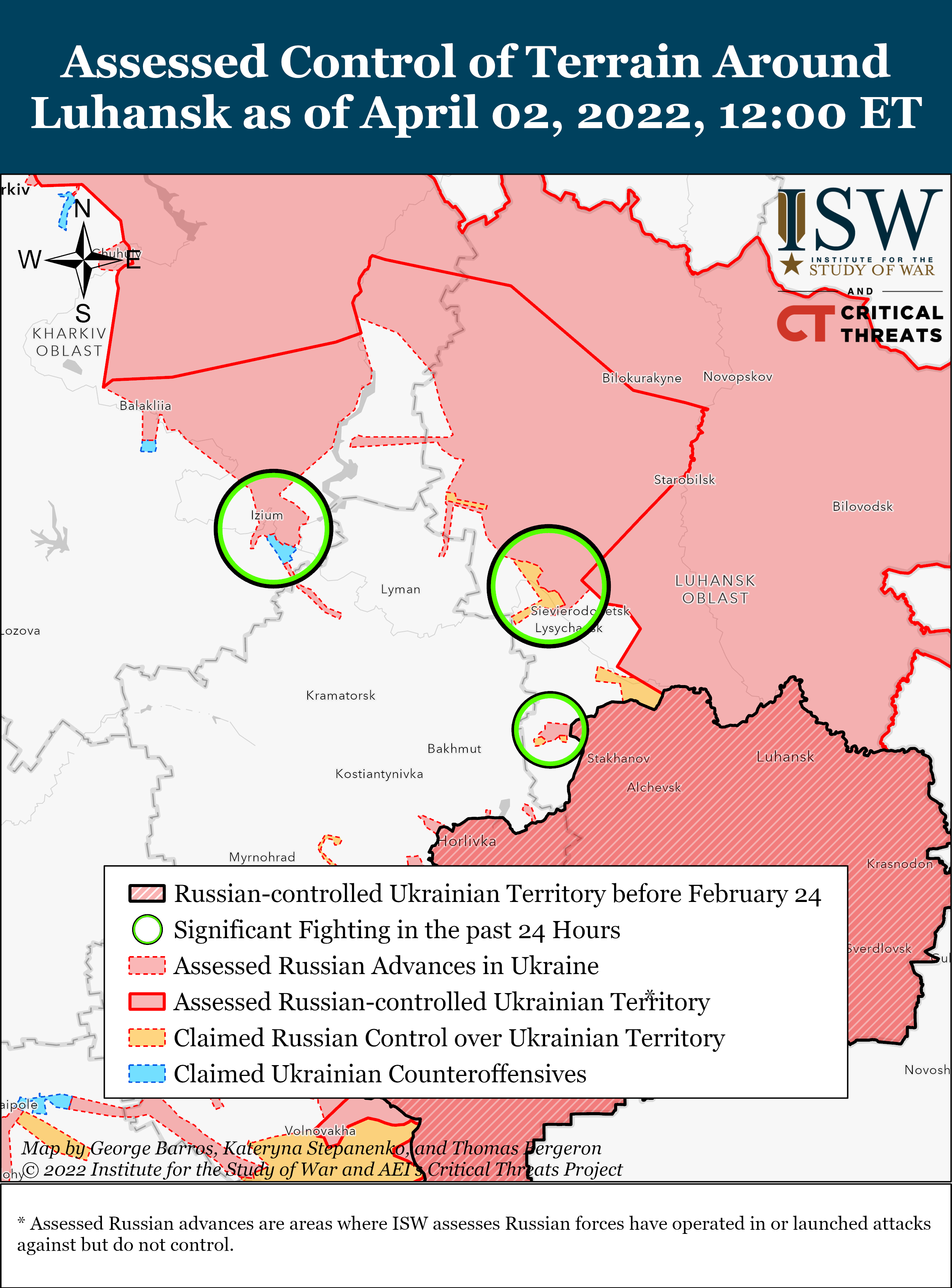 Russian forces in Izyum conducted an operational pause on April 2 after successfully capturing the city on April 1. The Ukrainian General Staff reported that Russian forces regrouped and established a pontoon crossing in the past 24 hours in preparation for further offensive operations.[8] The General Staff additionally reported that elements of the 4th Tank Division (likely withdrawn from the Sumy axis in the past week) were observed in Belgorod, Russia, and elements of the 106th Guards Airborne Division deployed to Pisky, northeast of Izyum.[9] Russian forces will likely leverage these and other reinforcements to conduct offensive operations southeast from Izyum to link up with Russian forces in Donbas in the coming days.

Russian forces continued to shell Kharkiv and its outskirts but did not conduct any ground attacks. Local Kharkiv and Ukrainian military authorities reported that Russian forces shelled Saltivka, Pyatykhaty, Derhachi, and Oleksyivka in the past 24 hours and conducted an Iskander-M missile strike on an unspecified Ukrainian position in Kharkiv Oblast on April 1.[10]

Ukrainian forces likely made significant territorial gains on April 2 and undertook operations to secure previously Russian occupied territory. While Russian forces abandoned large amounts of military equipment in the withdrawal from Kyiv, they appear to have withdrawn a substantial portion of their (damaged) units on this front successfully.[13] Russian forces withdrew in good enough order to mine abandoned positions and infrastructure to slow Ukrainian units, which conducted operations to clear settlements in the Bucha, Vyshhorod, and Brovary districts on April 2.[14] Deputy Ukrainian Defense Minister Hanna Malyar stated at 10:15 pm local time on April 2 that Ukrainian citizens should refrain from returning to their homes and that Ukrainian forces sought to ”identify and destroy” remaining Russian forces in Kyiv Oblast throughout the day.[15]

Russian forces east of Kyiv similarly withdrew into Belarus and Kursk Oblast, Russia, on April 2. The Ukrainian General Staff reported that elements of the 41st CAA continued to hold positions around Chernihiv city and screen withdrawing Russian forces.[16] Ukrainian forces continued to pursue Russian forces in Chernihiv Oblast on April 2, capturing Horodnia, Sloboda, Shestovytsya, and Novyi Bykiv in the past 24 hours.[17] Sumy regional authorities stated on April 2 that Russian forces in Konotop Rayon are maintaining a corridor through which equipment from Kyiv and Chernihiv is withdrawing to Russia, specifying that Russian forces are active in Bilopillya, Buryn, Putyvl, and Novoslobidske.[18] The Ukrainian General Staff stated at noon local time on April 2 that elements of Russia’s 2nd CAA withdrew from Brovary to Russia’s Kursk Oblast, likely through this corridor.[19] 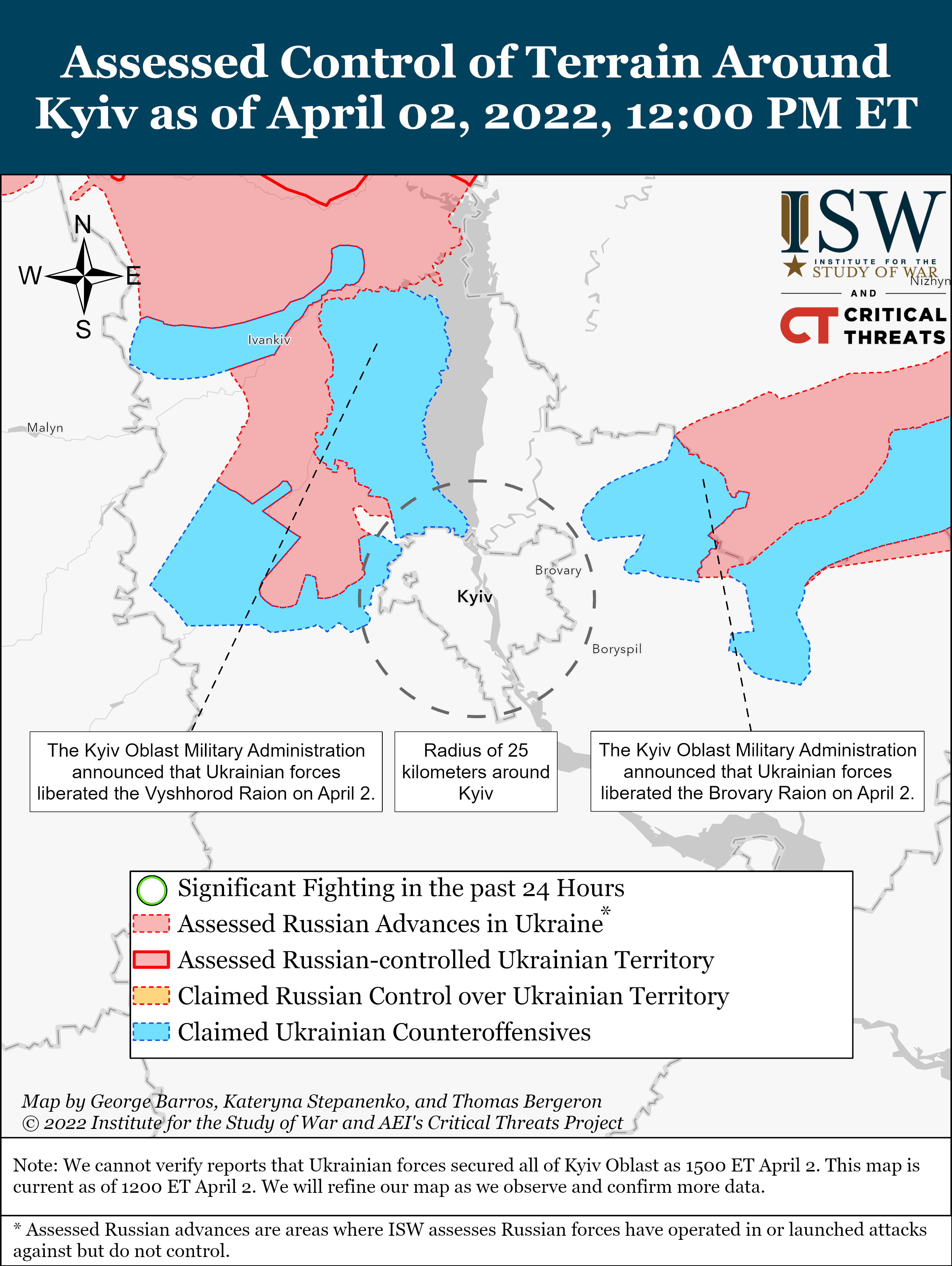 The Ukrainian General Staff reported at noon local time on April 2 that Russian forces conducted limited attacks “to reach the administrative borders of Kherson Oblast,” though ISW cannot independently confirm the extent and focus of these attacks.[20] Russian forces north of Kherson continued to shell Kryvyi Rih but did not conduct offensive operations toward the city.[21] Ukraine’s National Resistance Center and local social media users additionally reported that Russian forces in Enenhodar forcefully dispersed a protest on April 2.[22] Ukrainian protests and partisan actions in southern Ukraine continue to tie down Russian forces.