The Kremlin declared victory in the battle of Mariupol. Russian forces will attempt to starve out remaining Ukrainian defenders in the Azovstal Steel Plant rather than clear it through likely costly assaults. Russian President Vladimir Putin and Defense Minister Sergei Shoigu declared victory in the battle of Mariupol on April 21 despite the continued presence of Ukrainian forces in Mariupol’s Azovstal Steel Plant. In a staged, televised meeting, Putin ordered Shoigu to halt assaults on the plant to limit Russian casualties, claiming Russian forces have already captured the entirety of the city. The Kremlin will spin the (still incomplete) capture of Mariupol into a major victory in Ukraine to compensate for stalled or failed Russian offensives elsewhere.

The Kremlin’s reduction of the pace of operations in Mariupol is unlikely to enable the deployment of significant combat power to support other offensive operations in the coming days and weeks. Statements from US officials that Russia has not yet removed a dozen battalion tactical groups (BTGs) from Mariupol despite Putin’s claimed victory do not capture either the status of these Russian forces or other constraints on their use.[1] ISW has consistently assessed that Russian BTGs have taken high casualties in the battle of Mariupol, are degraded, and are unlikely to possess their full complement of personnel (800-900 at full strength). As with Russian operations elsewhere in Ukraine, reporting on numbers of BTGs without additional context and analysis of the combat power of these units is not a useful evaluation of Russian forces. While it is unlikely that all 12 reported BTGs were involved in the final fighting around the Azovstal plant, it will still take some time for those units that were engaged in final assaults to disengage for redeployment elsewhere. Some portion of these Russian forces will be necessary for several other missions—including maintaining the siege of the Azovstal plant, securing the rest of Mariupol against any remaining pockets of Ukrainian forces and likely partisan actions, and possibly redeploying to support Russian forces maintaining control of southern Ukraine. Russian forces will certainly be able to redeploy some units from Mariupol to offensive operations elsewhere—but Ukrainian forces have succeeded in tying down and degrading a substantial Russian force, and the Kremlin's declaration of victory has not inherently freed up 12 BTGs worth of combat power for other operations. 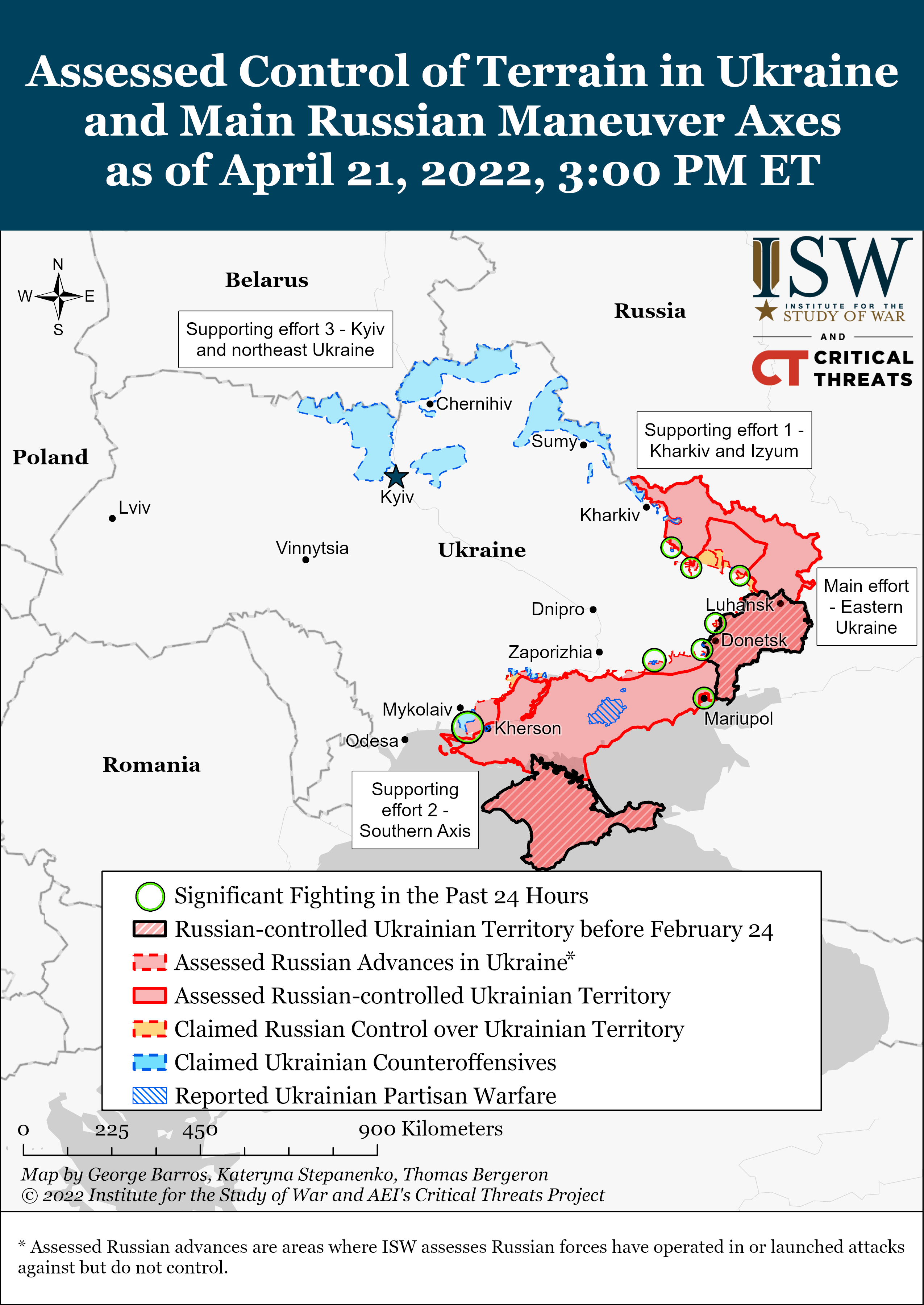 The Kremlin declared victory in the battle of Mariupol on April 21, though some Ukrainian forces remain in the Azovstal Steel Plant. Russian President Putin held a televised meeting with Defense Minister Shoigu (in his first confirmed public appearance since March 11) during which Shoigu claimed “the entirety of Mariupol is under the control of the Russian army” and stated Russian forces have “securely blocked” the "nationalists and foreign mercenaries” (Kremlin language for Ukrainian forces) remaining in the facility.[2] Shoigu claimed that Russian forces would require 3-4 days to finish clearing the Azovstal plant, after which Putin stated a final assault is unnecessary and ordered a full blockade of the facility to save Russian lives. The “meeting” was a managed Kremlin messaging effort claiming victory in the battle of Mariupol to be able to claim a major success without the likely costly operations required to clear out remaining Ukrainian defenders.[3] Local sources reporting fighting continued around the Azovstal plant in the last 24 hours despite Putin’s statement, but Russian forces did not conduct any major assaults against the facility.[4]

Ukrainian officials called for a local ceasefire to allow Ukrainian defenders and trapped civilians to leave Mariupol, though Russian forces will likely instead attempt to starve the remaining defenders into submission. Ukrainian Mayor of Mariupol Vadym Boychenko called for a ceasefire to allow civilians trapped in the plant to leave on April 21.[5]  Deputy Ukrainian Prime Minister Iryna Vereshchuk expanded on this call, stating around 1,000 civilians and 5,000 wounded soldiers (with an unspecified number of unwounded soldiers) remain in the Azovstal plant.[6] 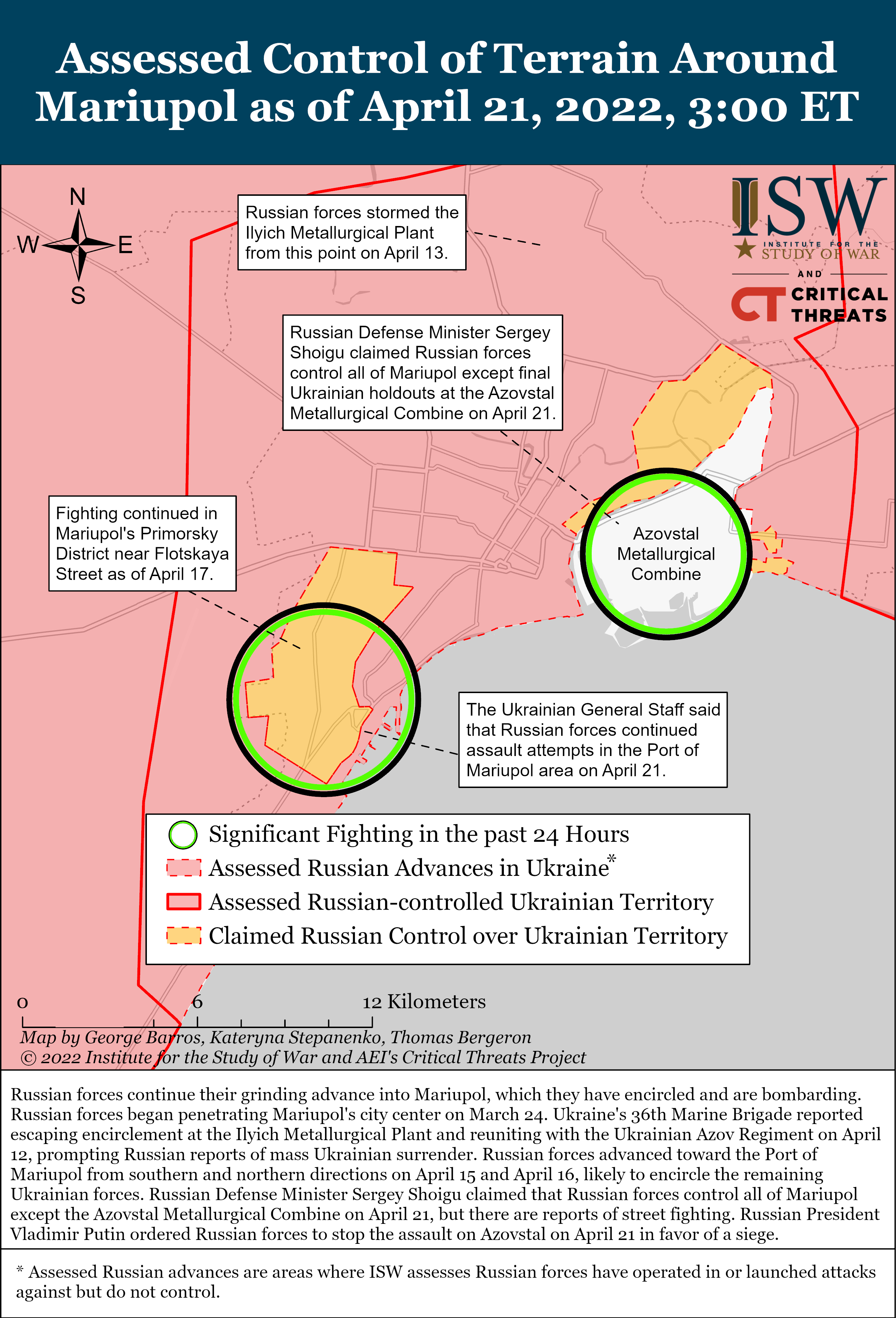 Russian forces continued offensive operations in eastern Ukraine but made only marginal gains on April 21. Russian forces continued to focus their assaults on Rubizhne, Severodonetsk, and Popasna and likely made local advances in Rubizhne, though Russian claims to have captured the entirety of Rubizhne are likely false.[7] The Ukrainian governor of Luhansk Oblast reported on April 21 that Russian forces control approximately half of Popasna, and street fighting is continuing across the city.[8] The Russian Ministry of Defense additionally claimed to capture Kreminna, west of Rubizhne, but ISW cannot verify this claim.[9] Russian forces are continuing to deploy reinforcements to eastern Ukraine to support further offensive actions.[10] 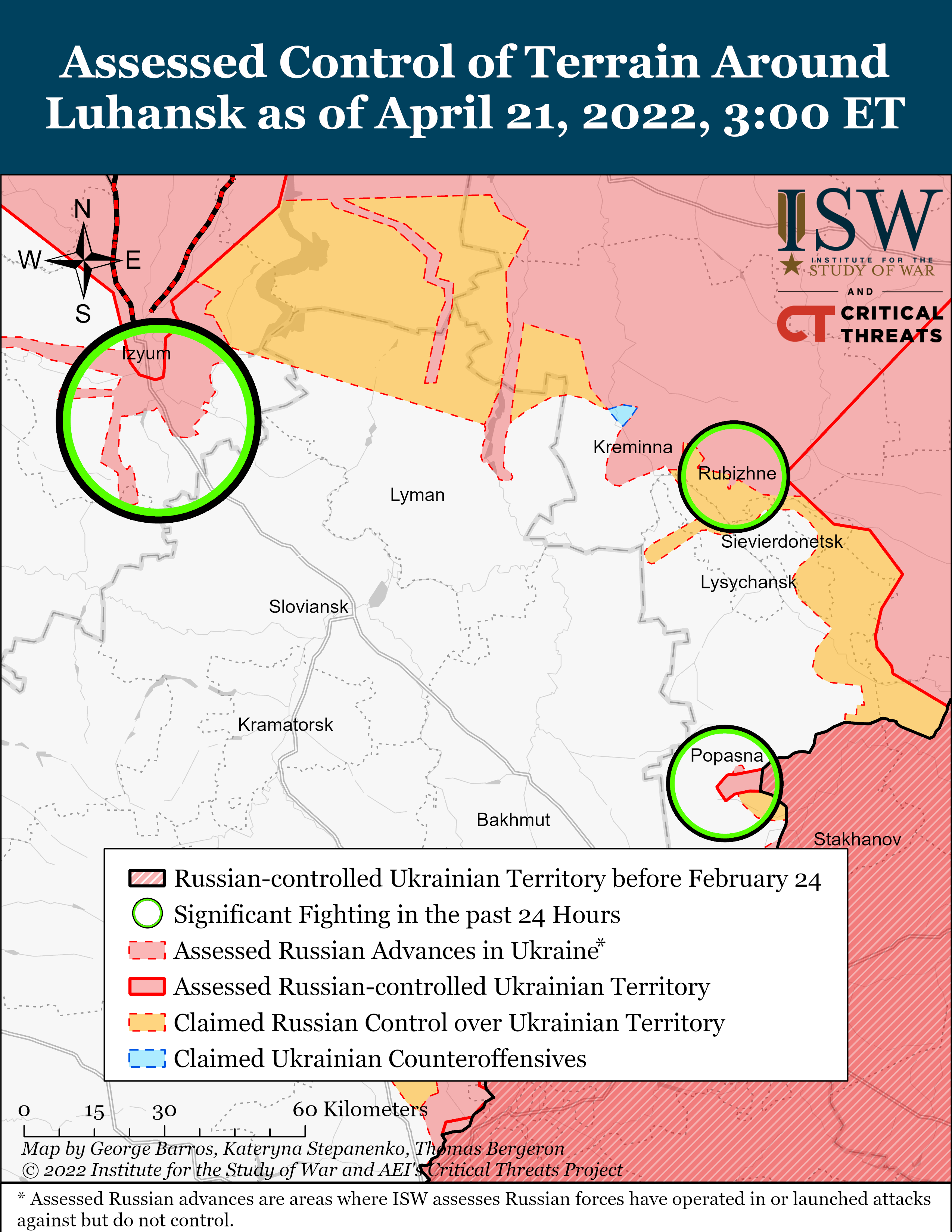 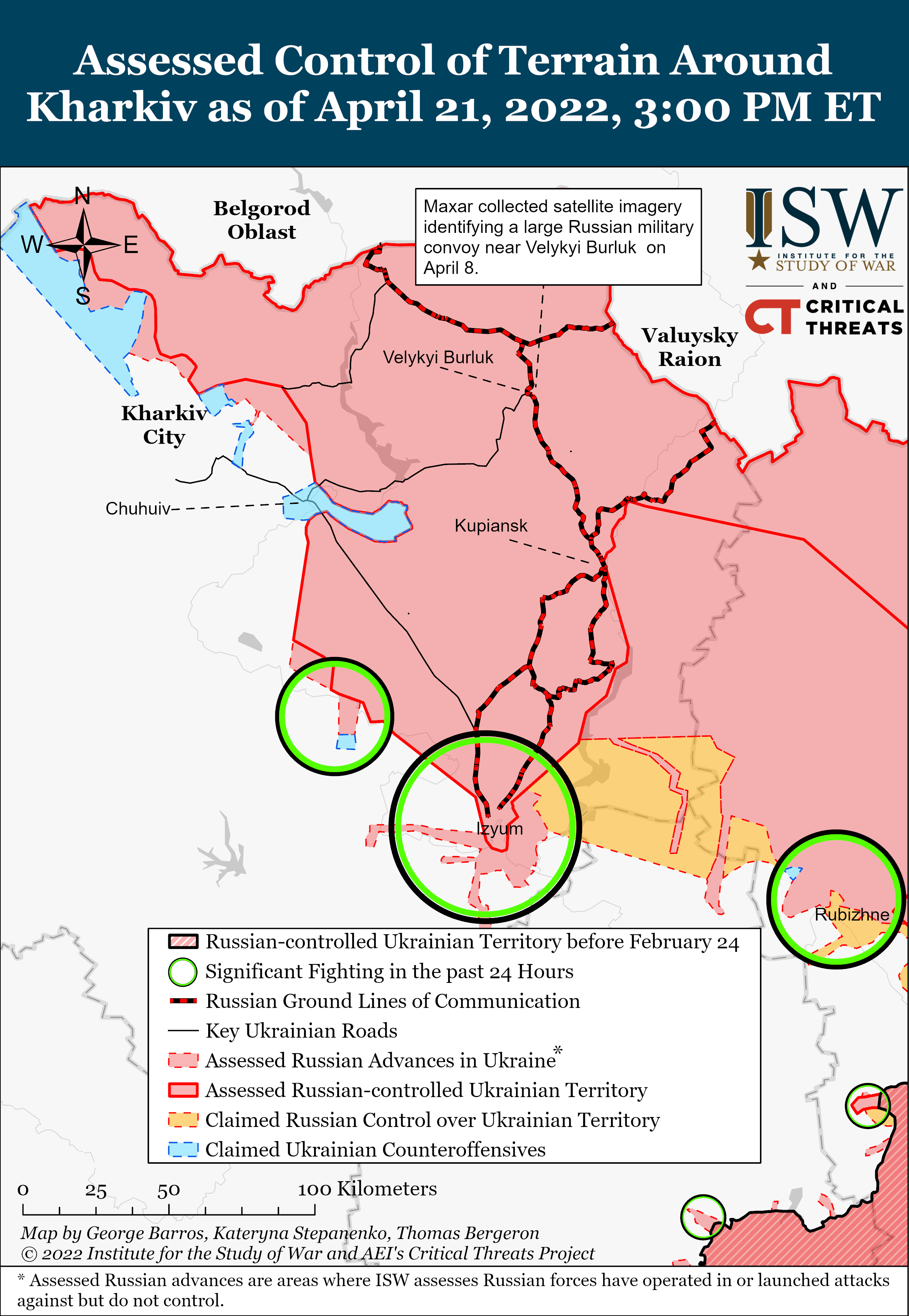 Russian forces likely conducted local attacks on Ukrainian positions west of Kherson on April 21 but did not secure any new territory.[13] Ukrainian military sources reported on April 21 Russian forces are preparing to conduct a “referendum” to create a “Kherson People’s Republic” on April 27.[14] The Kremlin likely intends to create one or more proxy states in occupied southern Ukraine to cement its military occupation and set conditions to demand permanent control over these regions. 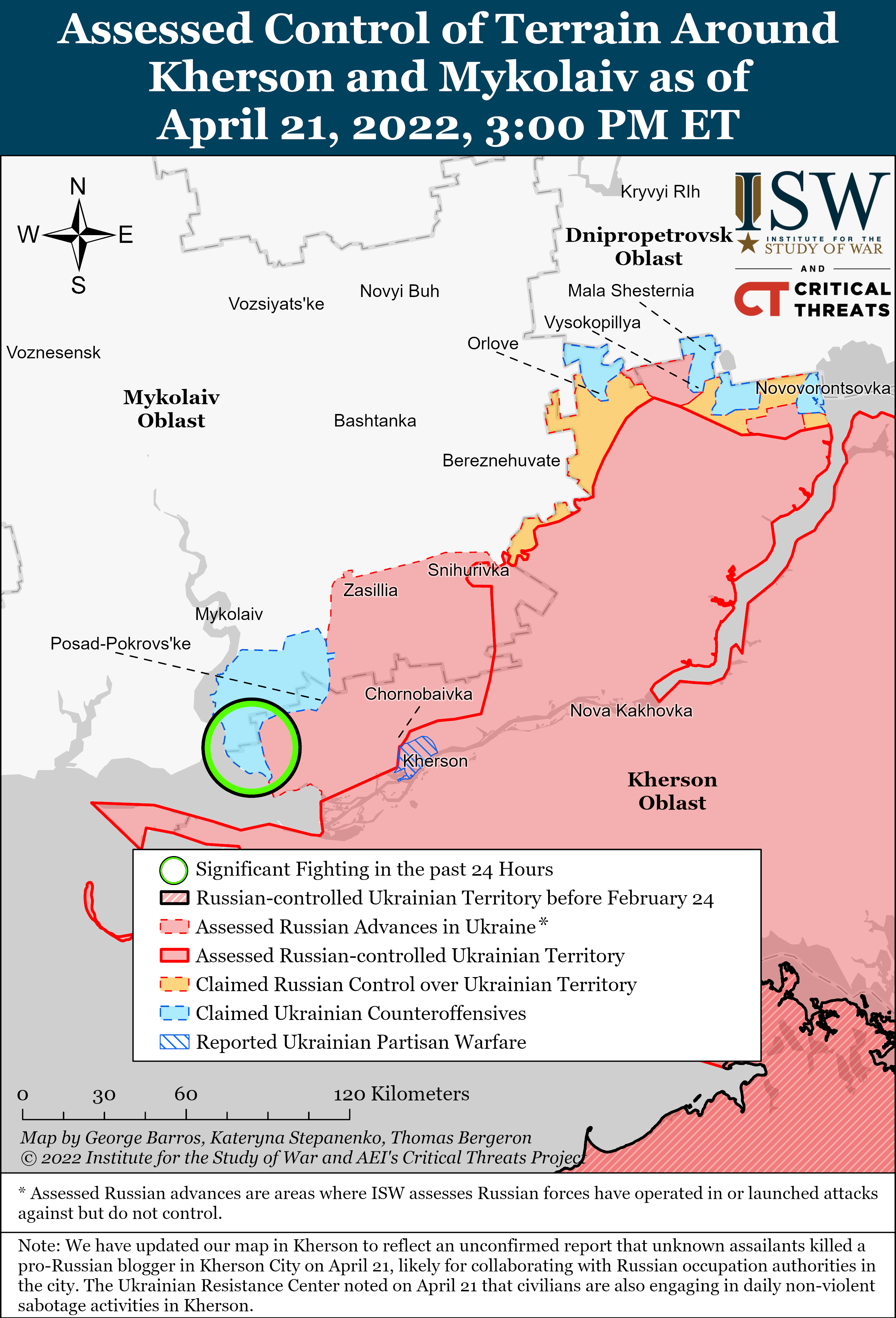