Russian offensive operations in eastern Ukraine made minor advances around Severodonetsk on April 24, seizing several small towns and establishing a pontoon bridge across the Krasna River west of Severodonetsk. Russia’s offensive in eastern Ukraine continues to follow the pattern of their operations throughout the war, using small units to conduct dispersed attacks along multiple axes rather than taking the pauses necessary to prepare for decisive operations. Russian forces continued to bombard the remaining Ukrainian defenders in Mariupol’s Azovstal Steel Plant and may be preparing for renewed assaults on the facility, which would likely lead to high Russian casualties. The military situation in southern Ukraine did not change in the last 24 hours. 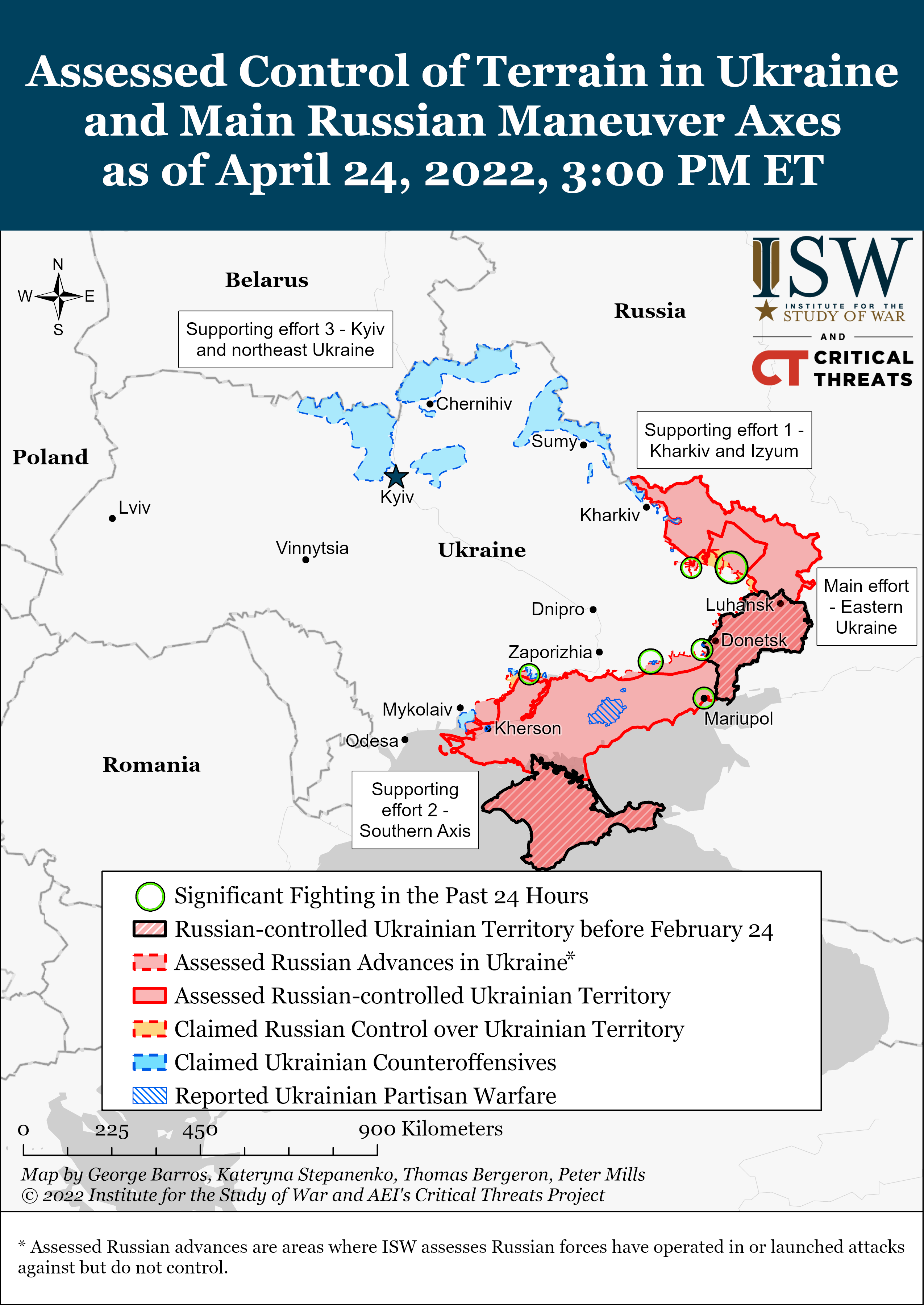 Russian forces continued to bombard Ukrainian defenders in the Azovstal Steel Plant with artillery and air strikes and may be preparing for renewed assaults on the facility.[1] The deputy commander of the Azov Regiment stated on April 24 that Russian Naval Infantry are preparing to launch an assault on Azovstal, and Ukrainian Presidential Adviser Oleksiy Arestovych similarly stated Russian forces are concentrating around Azovstal for an assault.[2] ISW cannot independently confirm Russian preparations for renewed assaults against Azovstal, which would likely sustain high casualties. Russian commanders likely still seek to starve out the remaining Ukrainian defenders but may be compelled to launch a hasty assault on the facility to meet a Kremlin-imposed deadline to fully clear Mariupol. Pro-Russian telegram channels released footage of Pacific Fleet Naval Infantry troops and armor reportedly leaving Mariupol to “go further for new victories,” though ISW cannot confirm details on the specific composition and destination of Russian forces departing Mariupol.[3] 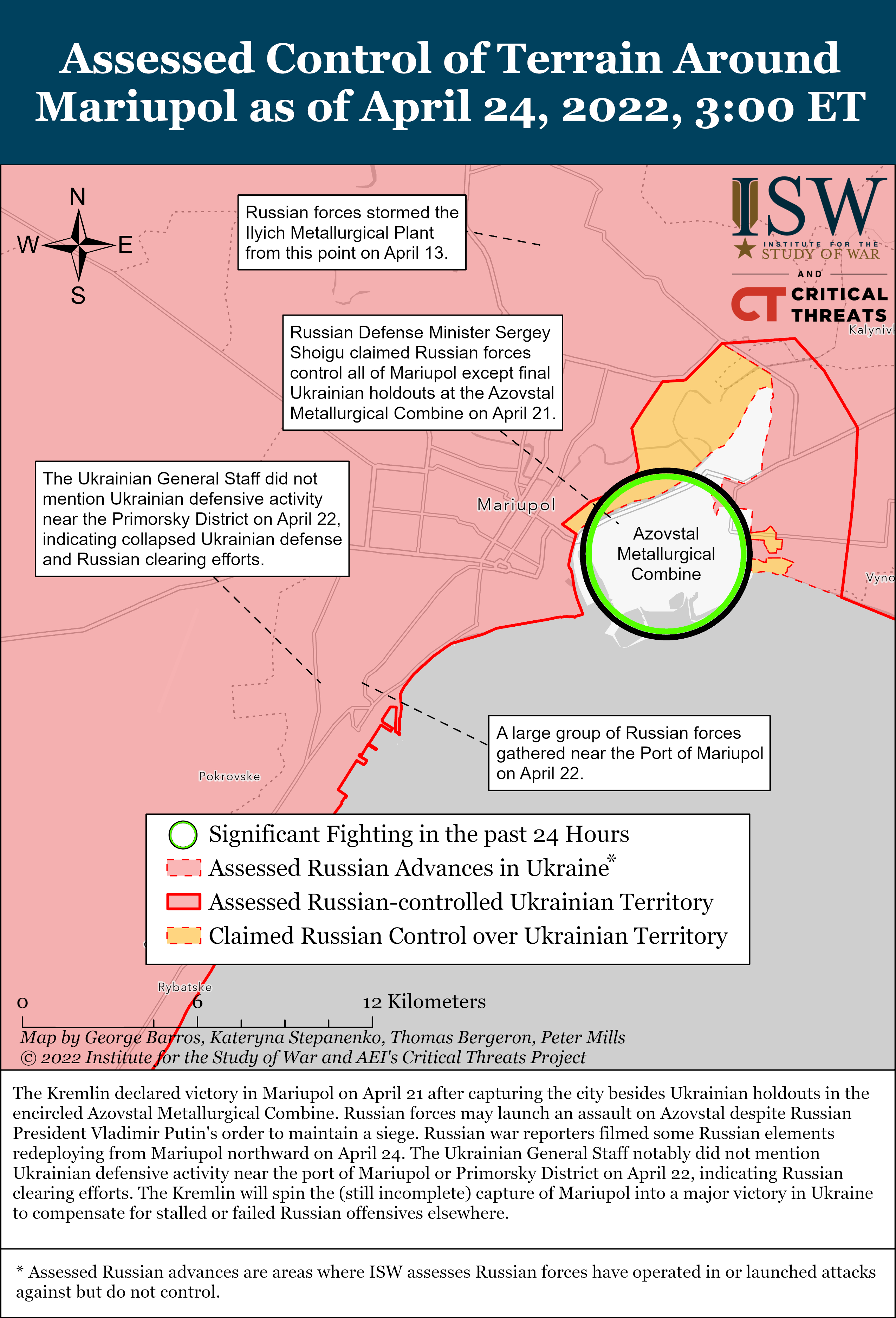 Russian forces conducted several attacks around Severodonetsk, Popasna, and Marinka on April 24, securing limited gains.[4] Russian forces made small advances around Severodonetsk, including establishing a pontoon crossing across the Krasna River west of Severodonetsk and capturing the towns of Popivka, Pischane, Zhytlivka, and Kreminna northwest of Rubizhne (confirmed by footage of LNR servicemen posing by village entrance signs) on April 24.[5] The Ukrainian General Staff reported that Russian forces primarily focused on securing their current positions around Popasna and prepared for further assaults.[6] Ukrainian Presidential Advisor Oleksiy Arestovcyh stated that Russian forces are conducting assaults north from Melitopol toward Hulyaipole, 80km east of Zaporizhzhia, and have advanced 10km in the past week.[7] Russian forces, including units from Mariupol, likely seek to drive north into Dnipropetrovsk Oblast to encircle Ukrainian forces in Donetsk Oblast but are unlikely to successfully complete this deep encirclement. 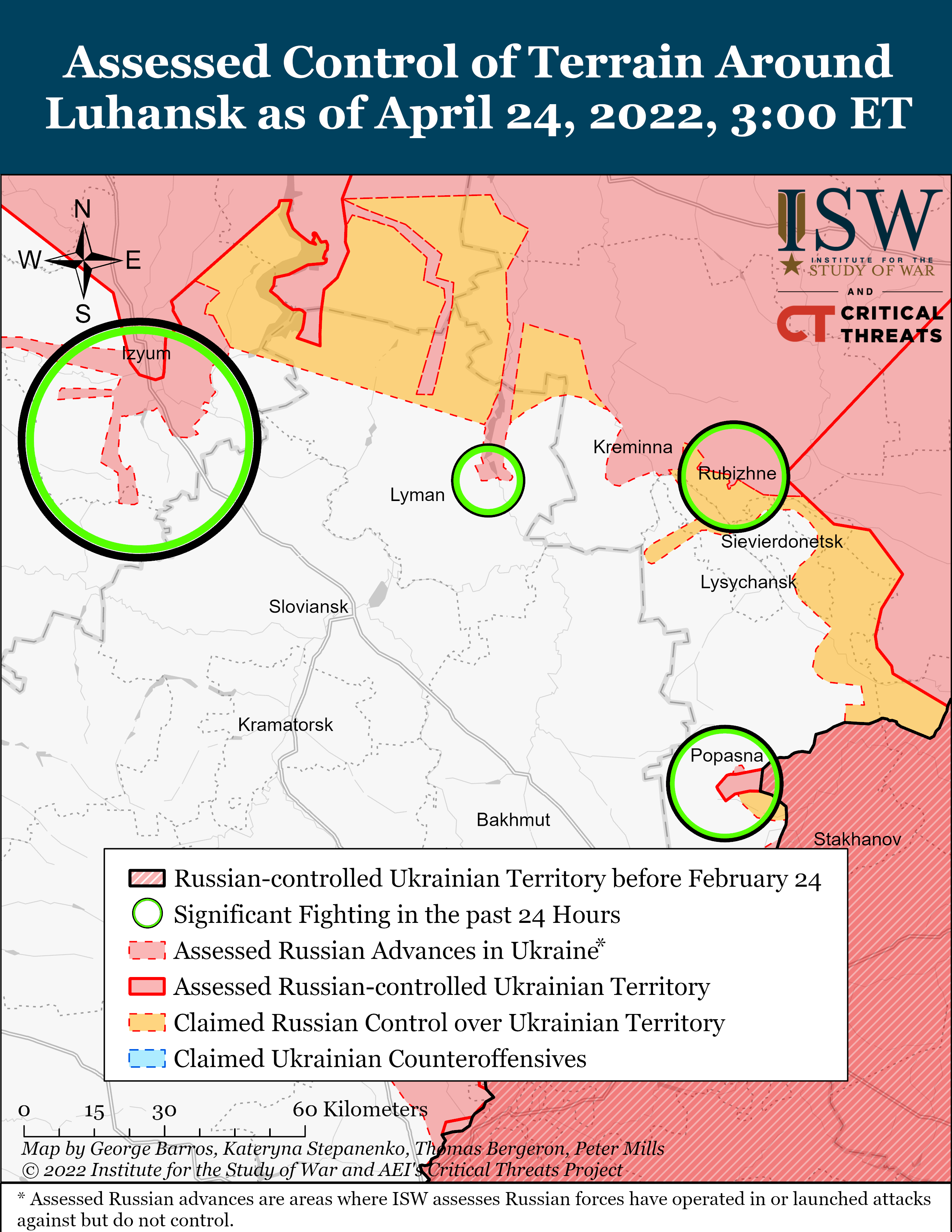 Ukrainian forces repelled limited Russian attacks from Izyum toward Slovyansk and Kramatorsk in the past 24 hours.[8] Russian forces maintained their positions around Kharkiv city and continued to shell the surrounding area on April 24 and conducted remote mining in Korotichi (a western suburb of Kharkiv) to disrupt Ukrainian movements.[9] The Ukrainian General Staff reported that unspecified Central Military District units, a division of the 14th Air Defense Army, and Iskander-M ballistic missile units are deploying to Belgorod for eventual deployment to eastern Ukraine.[10] The Ukrainian General Staff additionally reported that Russian forces continue to deploy through the Kupyansk region to reinforce operations around Izyum.[11]

The Ukrainian Main Intelligence Directorate (GUR) reported on April 24 that Ukrainian civilians in occupied areas of Kharkiv Oblast are organizing volunteer movements to resist the Russian occupation and deliver food and medicine to low-income people.[12] The GUR stated that Russian forces cut off water supplies in the Kupyansk district, are confiscating mobile generators, and are working to demoralize Ukrainian civilians by falsely claiming Ukraine cut off the electricity and that Russian forces control Kharkiv City. ISW cannot independently confirm this report, though it tracks with both Russian occupation measures and widespread Ukrainian resistance in occupied areas of Kherson and Zaporizhzhia Oblasts. 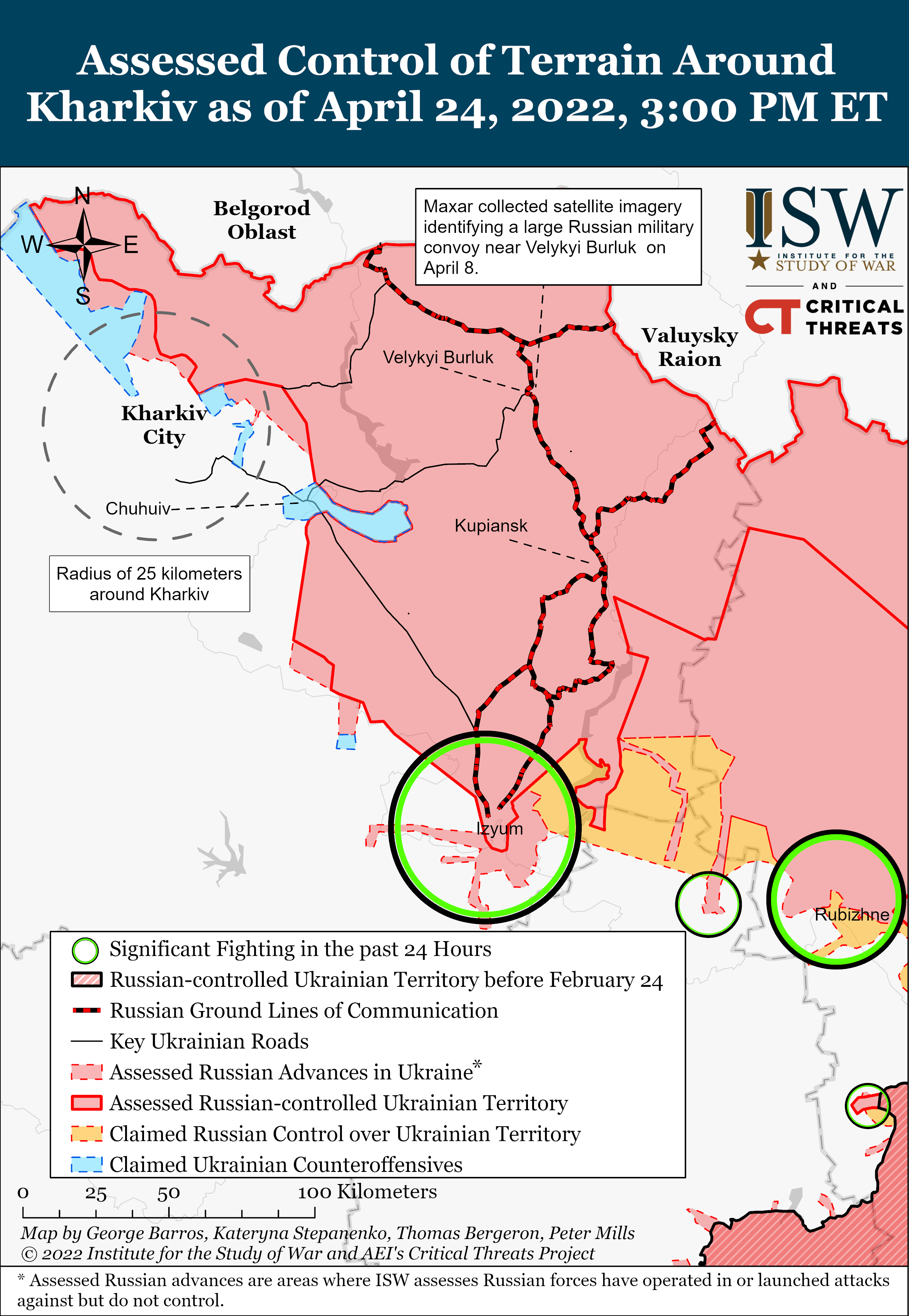 There was no significant change in this area in the past 24 hours.[13] Localized fighting continued in northern Kherson Oblast and west of Kherson city, but Russian forces did not launch any major attacks. 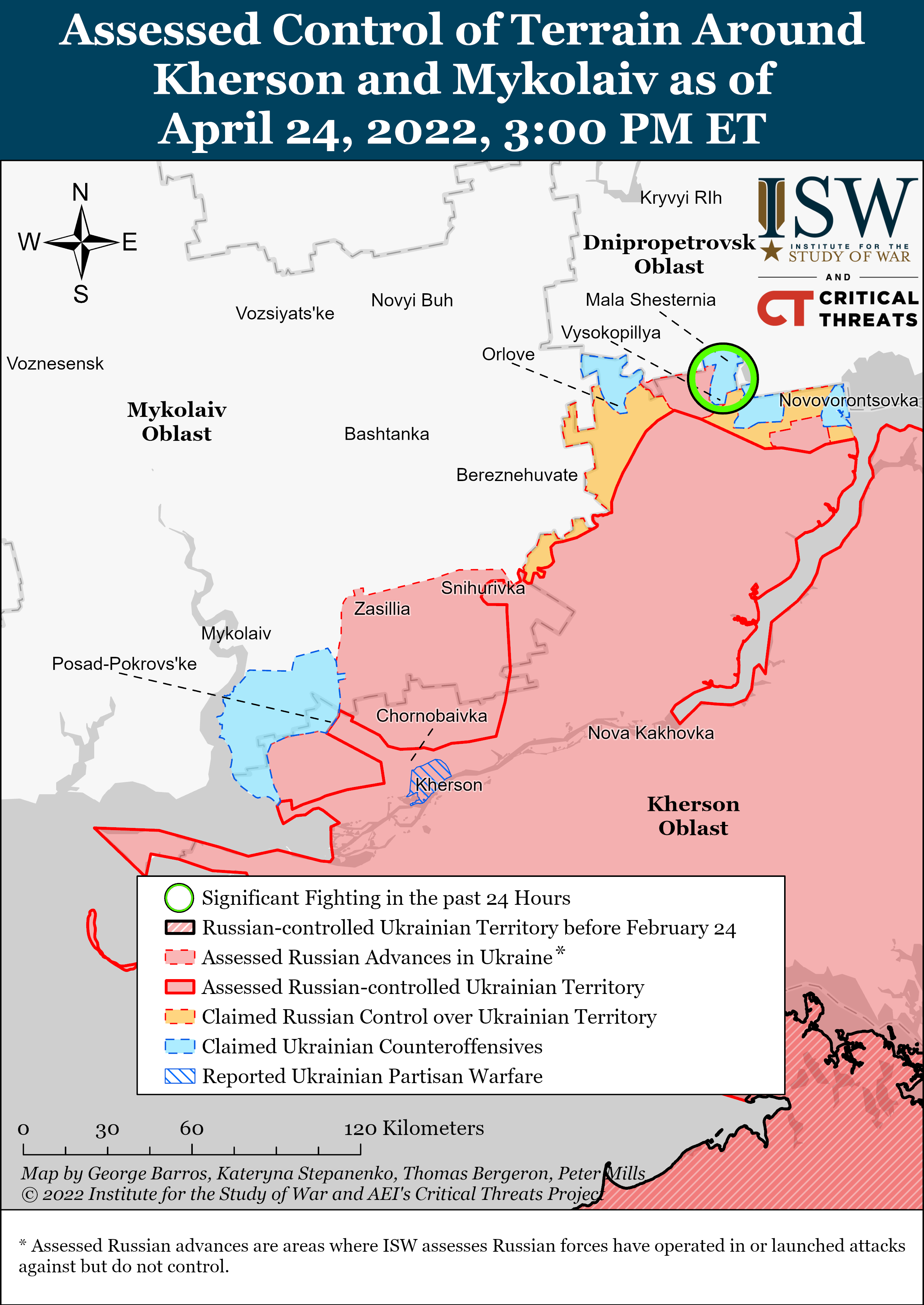