The Kremlin is reportedly attempting to mobilize industry to support prolonged war efforts in Ukraine. The Ukrainian Main Military Intelligence Directorate (GUR) reported that the Kremlin initiated the “industrial mobilization” of the defense enterprises in early August, banning some employees and the entire leadership at the Russian state industrial conglomerate company Rostec from taking vacations.[1] The GUR added that the Military-Industrial Commission of the Russian Federation, chaired by Russian President Vladimir Putin, is preparing to change the state defense order program by early September to increase expenditures by 600-700 billion rubles (approximately $10 billion). Russian outlet Ura also reported that Russian Defense Minister Sergey Shoigu likely visited the Uralvagonzavod factory, the largest tank manufacturer in Russia and the producer of Russia’s T-72 main battle tanks, on August 12.[2] The GUR previously reported that Uralvagonzavod faced financial issues due to Western-enforced sanctions and failure to meet state contract obligations.[3] If true, Shoigu’s visit could suggest that the Kremlin is attempting to restart or expand the operation of the military-industrial complex. ISW has previously reported that the Kremlin has been conducting a crypto-mobilization of the Russian economy by proposing an amendment to the federal laws on Russian Armed Forces supply matters to the Russian State Duma on June 30.[4] The amendment obliges Russian businesses, regardless of ownership, to fulfill Russian military orders and allows the Kremlin to change work conditions for employees. Putin signed the amendment on July 14, which indicates that the Kremlin will continue to introduce more measures to expand the Kremlin’s direct control over the operations of Russia’s military-industrial complex.[5] 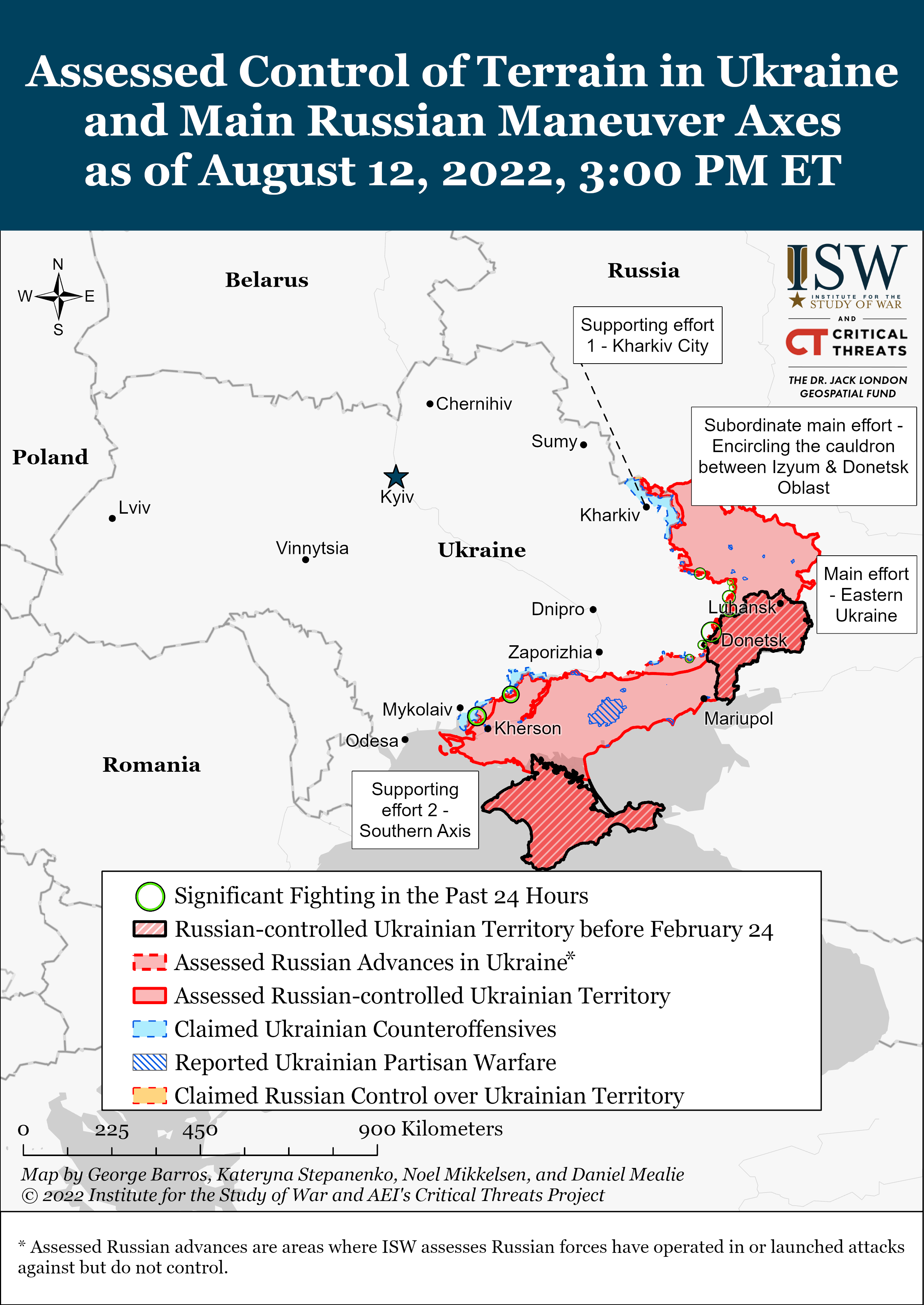 Russian forces conducted limited ground attacks along the Donetsk-Kharkiv Oblast border on August 12. The Ukrainian General Staff reported that Ukrainian forces repelled a Russian attack in the direction of Bohorodychne and Dolyna (both 20km northwest of Slovyansk).[6] Russian forces conducted airstrikes near Zalyman (30km northwest of Izyum), missile strikes on Kramatorsk (6km from the southern outskirts of Slovyansk) and continued to shell settlements along the Kharkiv-Donetsk border on August 12.[7] 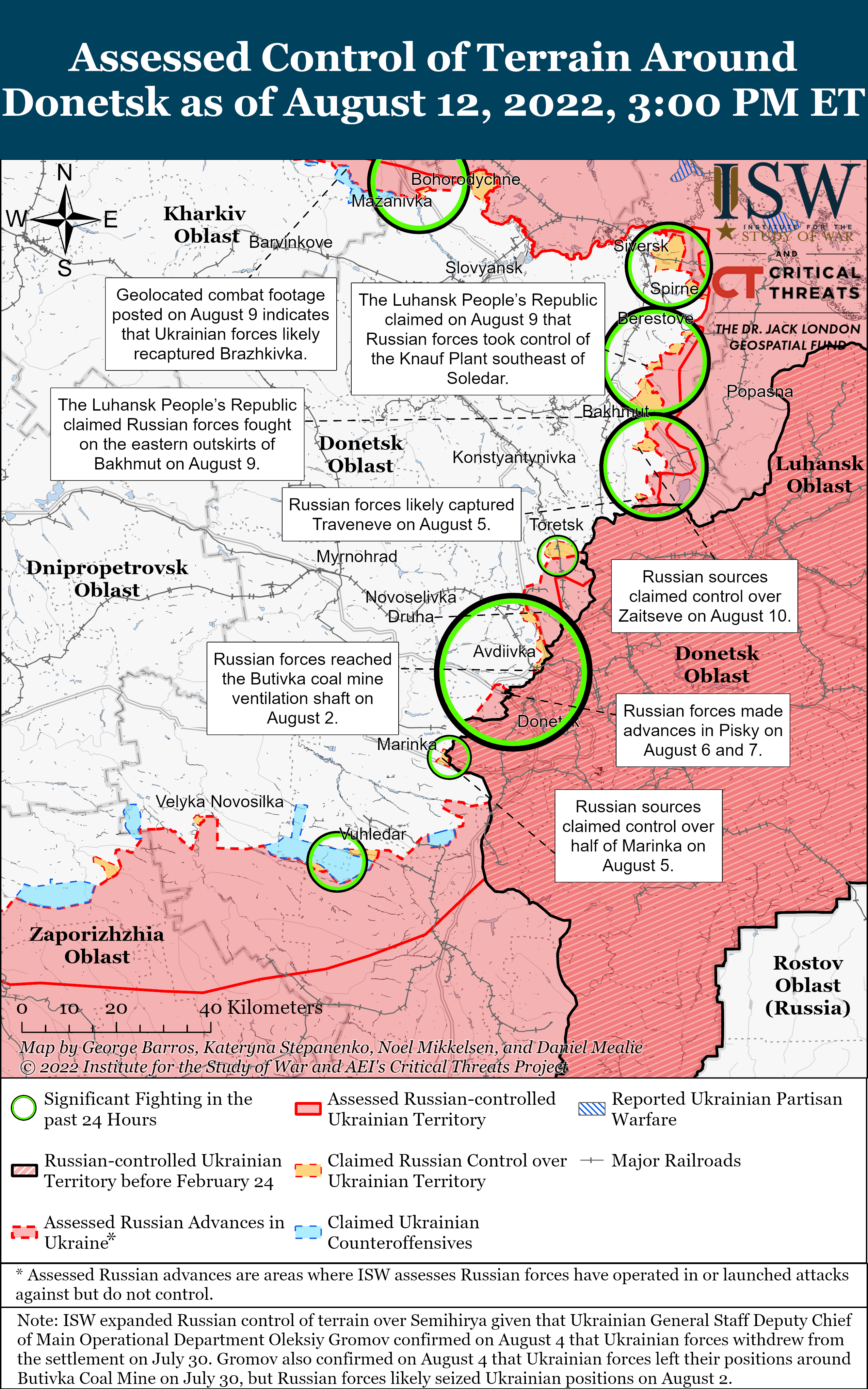 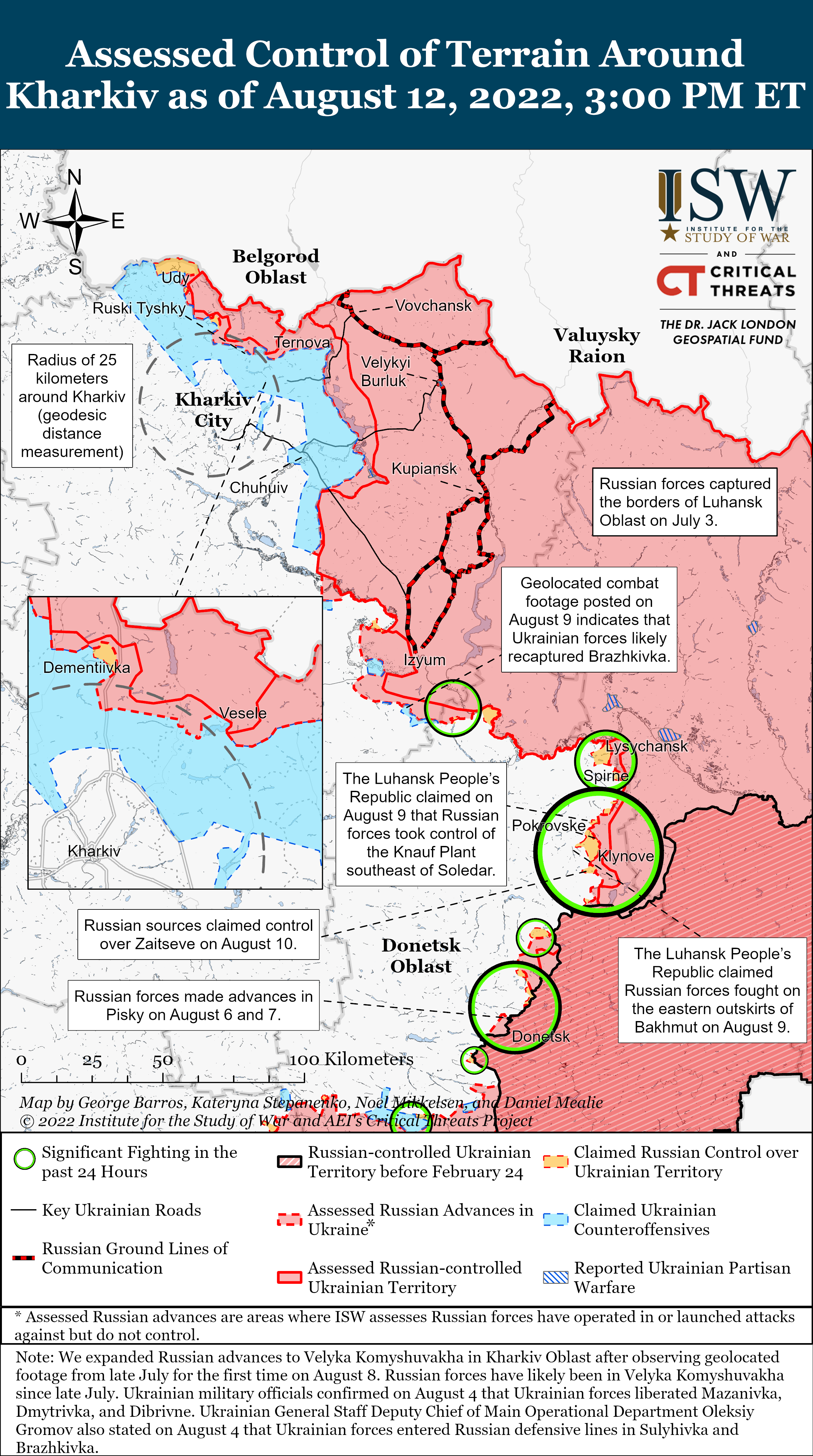 Russian forces continued to launch air and artillery strikes along the Kherson Oblast administrative border but did not conduct offensive operations on August 12. The Ukrainian General Staff reported that Russian forces conducted airstrikes on Andriivka, Lozove, and Velyke Artakove (near the bridgehead over the Inhulets River), and Blahodatne, Novohryhorivka, Bruskinske, and Myrne (north of Kherson City).[21]  The Ukrainian General Staff reported that Russian forces continued shelling civilian and military infrastructure using tank, tube, and rocket artillery and conducted aerial reconnaissance using UAVs along the entire line of contact.[22]

A spokesperson for Ukraine’s Main Military Intelligence Directorate (GUR), Andriy Usov, said on August 12 that forces belonging to the Wagner Private Military Company are present at Zaporizhzhia Nuclear Power Plant (NPP).  Usov suggested that the Kremlin trusts Wagner militants to plant mines on the territory of the NPP because the Russian military is either incapable of or refusing to do so.[28]

International Atomic Energy Agency (IAEA) Director General Rafael Grossi stated on August 11 that the IAEA has been prepared to physically investigate the safety of the Zaporizhzhia NPP since June but that “political and other factors” have made a mission impossible.[29] Grossi emphasized that the IAEA’s preliminary assessment suggests that there is no immediate threat to nuclear safety but that “this could change at any moment.”[30] US officials called on Russia to demilitarize and cede the Zaporizhzhia NPP to Ukrainian authorities because there have been repeated strikes on the facility since August 5.[31] 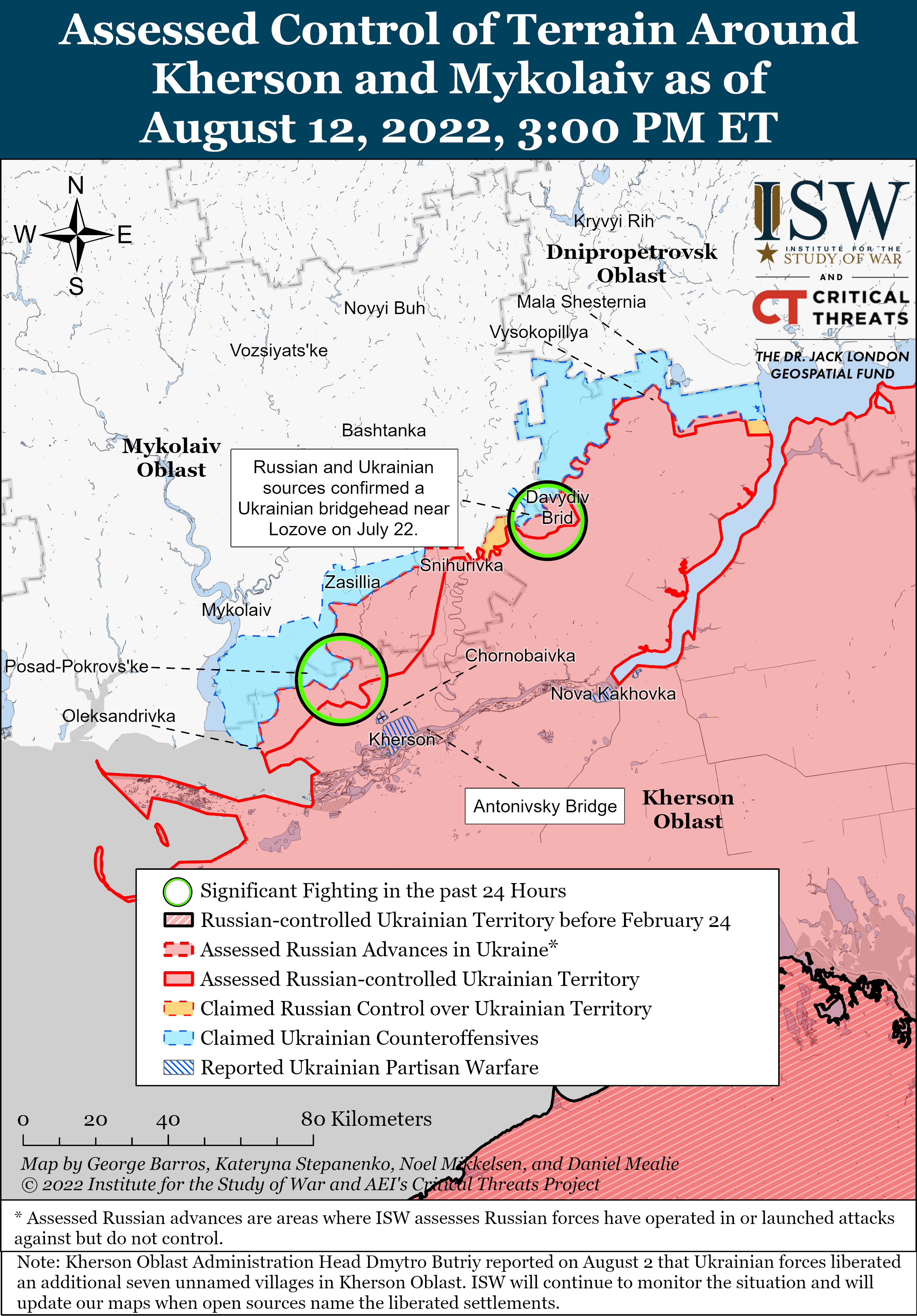 Russian “volunteer” units are likely deploying piecemeal groups of soldiers to reinforce specific areas, and not deploying in their full organic structures. Russian federal subjects (regions) continued to announce the formation of new volunteer units, however Russian media is likely misrepresenting the percentage fill of these units. Russian opposition outlet Mediazona revealed that several federal subjects are misrepresenting their progress toward recruiting volunteers.[32] Mediazona found that Dagestan and Kalmykia Republics announced the formation of rifle and motorized rifle regiments in June but did not follow through with additional information following the original announcement, suggesting failures to generate regiment-sized units.[33] The report also highlighted inconsistencies in the announcement of the formation of volunteer battalions in Republic of Tatarstan, where local officials claimed that they had already recruited 300 volunteers and identified 400 prospective recruits as of June 23. Tatarstan officials continued to advertise contract service despite having claimed to have finished the formation of battalions and announced the deployment of five volunteers from the battalion to Ukraine. ISW has previously pointed out Tatarstan‘s inconsistent reporting on the timeframe of recruitment and deployment to Ukraine, and it is likely that Russian forces are deploying small groups of recruits to training grounds and Ukraine as they sign contracts. The Republic of Karelia also claimed that recruitment for local volunteer battalions ended on July 15, but Mediazona’s investigation found that the region is still actively recruiting for the battalions. It is possible that Karelia is recruiting replacements for casualties, although there is no evidence one way or the other. Chelyabinsk Oblast officials claimed to have recruited 514 volunteers split between two volunteer battalions, but then stated that only 125 recruits deployed to Ukraine.[34] The Mari El Republic initially required volunteers to have prior military experience, but Mediazona contacted the local military recruitment center and noted that the Republic offered to initiate enlistment procedures without such prior service.

Mediazona’s report supports ISW’s original assessment that the Kremlin is scrambling to find any reinforcements to maintain its prolonged war in Ukraine, but these efforts are unlikely to generate combat ready or cohesive force necessary for the Kremlin’s goal of seizing all of Ukraine.[35] Russian federal subjects are likely misreporting interest in these volunteer units to encourage more residents to enlist in the recruitment drives.

ISW has identified additional federal subjects that are forming new volunteer units. Mediazona reported that the Republic of Ingushetia created a volunteer motorized rifle company in the 503th Motorized Rifle Regiment based in Troiskoye and is forming a volunteer rifle company of the 34th Separate Motorized Rifle Brigade.[36] Social media users published a brochure calling on men ages 18 to 55 to serve in an unnamed reserve battalion based out of Moscow City for a six to twelve months.[37] Moscow City military recruitment center offered volunteers a monthly salary of 200,000 rubles (approximately $3,200). ISW has previously reported that Moscow City officials are forming the ”Sobyaniniskiy Polk” regiment, but it is unclear if the above-mentioned battalion is a different military unit from the ”Sobyaniniskiy Polk” regiment. Mediazona noted that Moscow City military recruitment centers denied that they are recruiting for the ”Sobyaniniskiy Polk.” 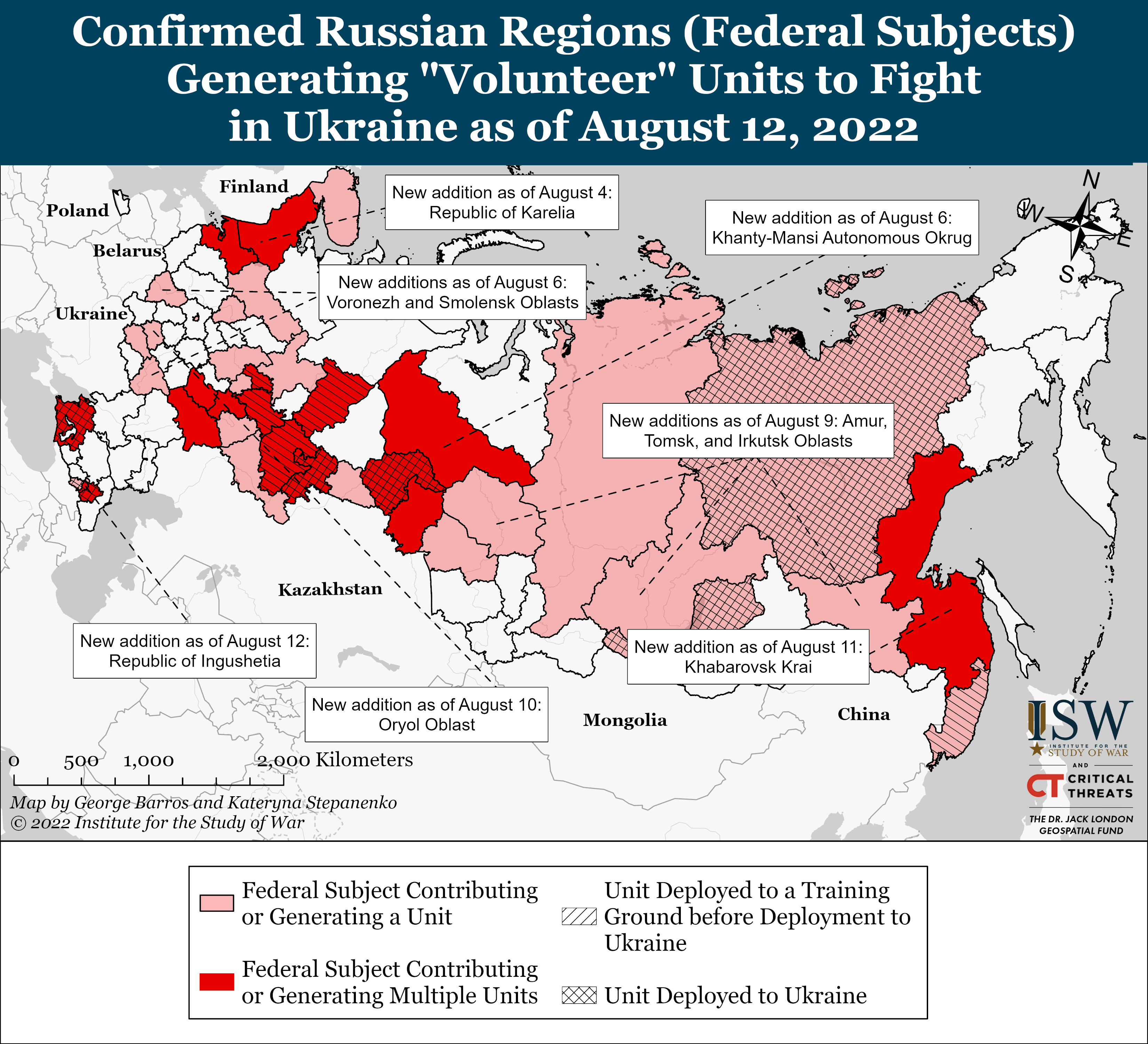 Russian occupation authorities in Mariupol continued preparing for show trials and potential executions of Ukrainian Prisoners of War (POWs) from the Azovstal plant as ISW assessed on August 11.[39] Local sources shared images of construction on a Mariupol theater building to prepare for the sham tribunals on August 12. The advisor to the Ukrainian mayor of Mariupol, Petro Andryushchenko, and local Telegram channel Mariupol Now both reported on August 12 that occupation forces are "rushing" to turn Mariupol’s Chamber Philharmonic Theater into a prison and to build a special "garage/bunker" with cage-lined hallways to receive prisoners by the planned August 24 tribunal.”[40] Ukraine’s Main Military Intelligence Directorate (GUR) issued a statement on August 12 on behalf of Ukraine's security and defense forces calling on “the entire civilized world to prevent the announced trial of Ukrainian defenders by executioners in Mariupol.”[41]

Ukrainian partisans are likely targeting Russian occupation officials and Ukrainian collaborators who are preparing for the sham annexation referenda, probably to disrupt the Russian annexation of occupied Ukraine. The Ukrainian Resistance Center reported that partisans targeted the head of a local election headquarters belonging to Russian President Vladimir Putin’s United Russia party in Melitopol on August 12.[42] The official, Oleg Shostak, was hospitalized in unclear condition.[43] Russian outlets referred to Shostak as the public relations head for the Zaporizhzhia Oblast Occupation Administration and the head of the "humanitarian headquarters." Russian occupation officials have been using United Russia party members to distribute humanitarian aid in exchange for cooperation with occupation authorities, including giving up personal data that can be used to rig the sham referenda, as ISW has previously reported.[44] The Ukrainian head of the Luhansk Oblast Military Administration, Serhiy Haidai, reported on August 12 that partisans detonated a car bomb targeting the unnamed head of the Inter-district Registration and Examination Department in occupied Starobilsk, Luhansk Oblast.[45] Ukrainian officials and partisan outlets framed attacks in recent days as the beginning of the "hunt for the collaborators preparing the pseudo-referenda."[46] Ukraine’s Strategic Communications Center warned on August 12 that “the resistance movement closely monitors collaborators, knows everyone by sight and name, and will not leave anyone without proper attention.”[47]
Fear of Ukrainian partisan activity could very well be shaping the behavior of occupation forces. Mariupol Mayoral Advisor Petro Andryushchenko claimed that Russian proxy Donetsk People’s Republic (DNR) forces shot down a Russian helicopter in the Staryi Krym settlement just outside of Mariupol, allegedly because the DNR forces were jumpy due to "fear of resistance."[48] The Mariupol City Council linked reports of the shooting to claims of discord within occupation leadership.[49]

GUR Spokesperson Andriy Usov reported on August 12 that Russian forces do not have a final date for their pseudo-referenda to annex occupied Ukrainian territories because Russian forces "do not control the situation" and no longer feel safe in Ukraine.[50] He argued that two factors are preventing Russian occupiers from holding their referenda: Ukrainian forces continue to liberate occupied territories, and Ukrainian civilians in occupied areas do not support the referenda. Russian occupation authorities continue to produce pro-referendum propaganda, however. The Russian deputy head of the Kherson Oblast Occupation Administration, Kirill Stremousov, shared videos of his meetings with citizens of Kherson Oblast on Telegram on August 12 alongside a claim that his meetings prove the people of Kherson Oblast “unanimously” want to join Russia to attain “economic stability, social equality, and security.[51]