Elements of the Luhansk People’s Republic (LNR) militia reportedly refused to continue fighting in Donetsk Oblast and complained about the grueling pace of offensives outside of Luhansk Oblast. The emotional significance of recent Russian targets in Donetsk Oblast resonates with audiences in the Donetsk People’s Republic (DNR), but not with LNR audiences tired of grueling offensives beyond their claimed borders. Several Ukrainian channels shared a video on August 15 of soldiers from LNR Battalion 2740 refusing to fight for the DNR.[1] The soldiers claim that they celebrated victory on July 3, when LNR forces reached the borders of Luhansk Oblast, and that their work is done. At least one Russian milblogger has criticized the LNR servicemembers for desiring Russian support for their own ”liberation” and then refusing to fight in Donetsk Oblast.[2] ISW cannot independently verify the origin or authenticity of this particular video. Its message reflects a larger trend of diminished LNR investment in and morale to support the Russian war in Ukraine, however. This trend is particularly dangerous to Russian forces seeking to recruit still more new soldiers from Luhansk Oblast to make up for recent losses. Further division within Russian-led forces also threatens to further impede the efficiency of the Russian war effort.

DNR units have previously recorded similar appeals when operating in Luhansk, Kharkiv, and Kherson Oblasts, which may indicate that proxy troops might not fully support the Kremlin’s expansive invasion plans. ISW has previously reported that servicemen of the 3rd Infantry Battalion of the DNR’s 105th Infantry Regiment complained when the unit was redeployed from Mariupol to Luhansk Oblast in late May.[3] The 113th Regiment of the DNR also published a similar appeal from the Kherson Oblast frontlines in early June.[4] Another serviceman of an unspecified DNR battalion complained that Russian border guards held the unit at the Belgorod Oblast border after the unit fought around Kharkiv City in mid-May to allow Russian units to withdraw first.[5] DNR-based war correspondents have been boasting about the DNR progress around Avdiivka, but such attitudes may sour again if the DNR units are recommitted to another axis.

Russia’s annual Technical Forum and Army Games which began in Moscow on August 13 do not represent any immediate military threat to Ukraine. The forum and army games are not military exercises. The forum is the Kremlin’s premier annual military-industrial complex exposition and generates reliable arms sale revenue, which the Kremlin uses to supplement income lost due to sanctions.[6] The Army Games are a complementary series of competitive military sporting events that the Kremlin uses to demonstrate Russian weapons systems in the field and develop relationships with foreign militaries. This year’s Army Technical Forum will be held from August 15 to August 21 and the Army Games will run from August 13 to August 27.[7] 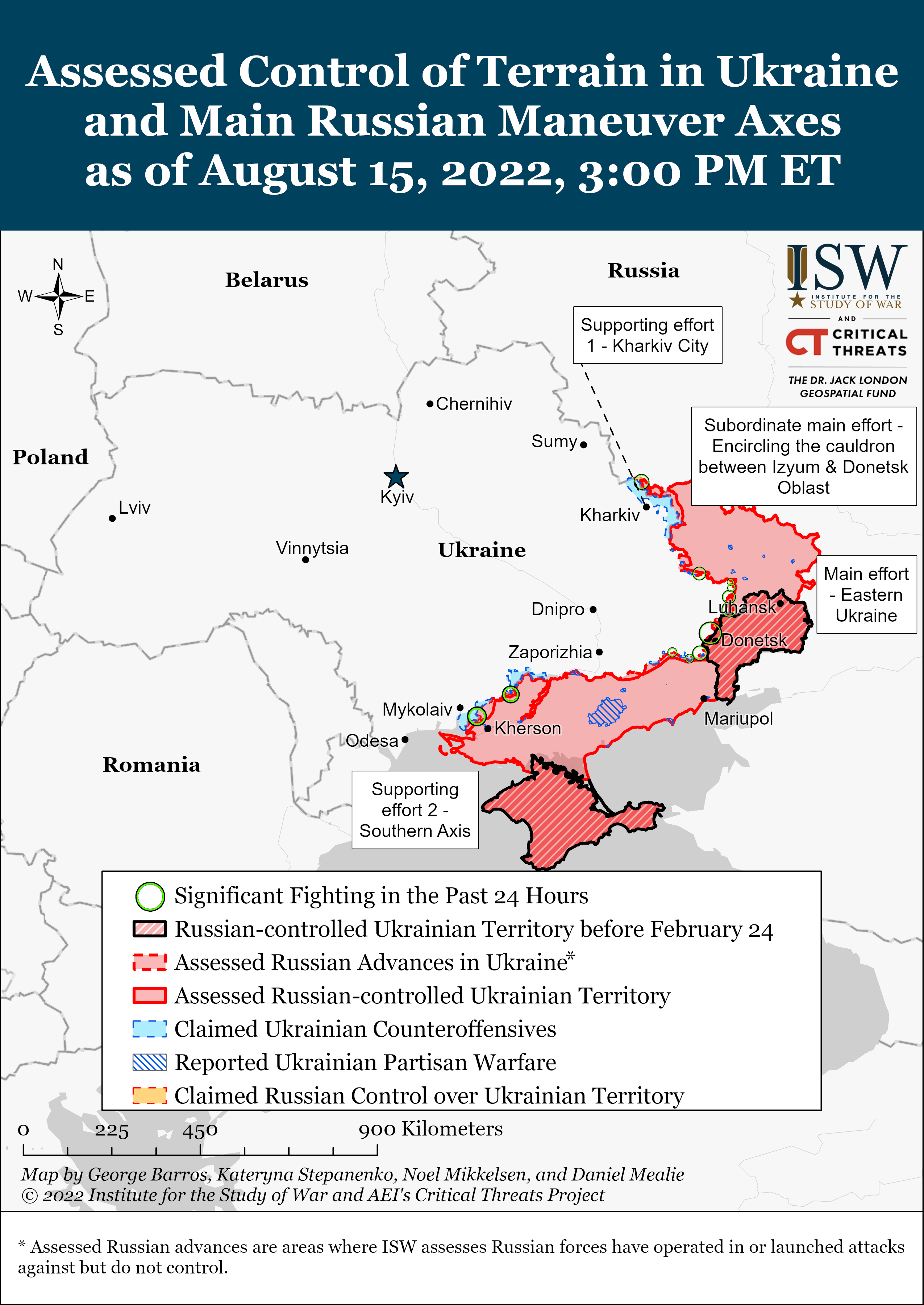 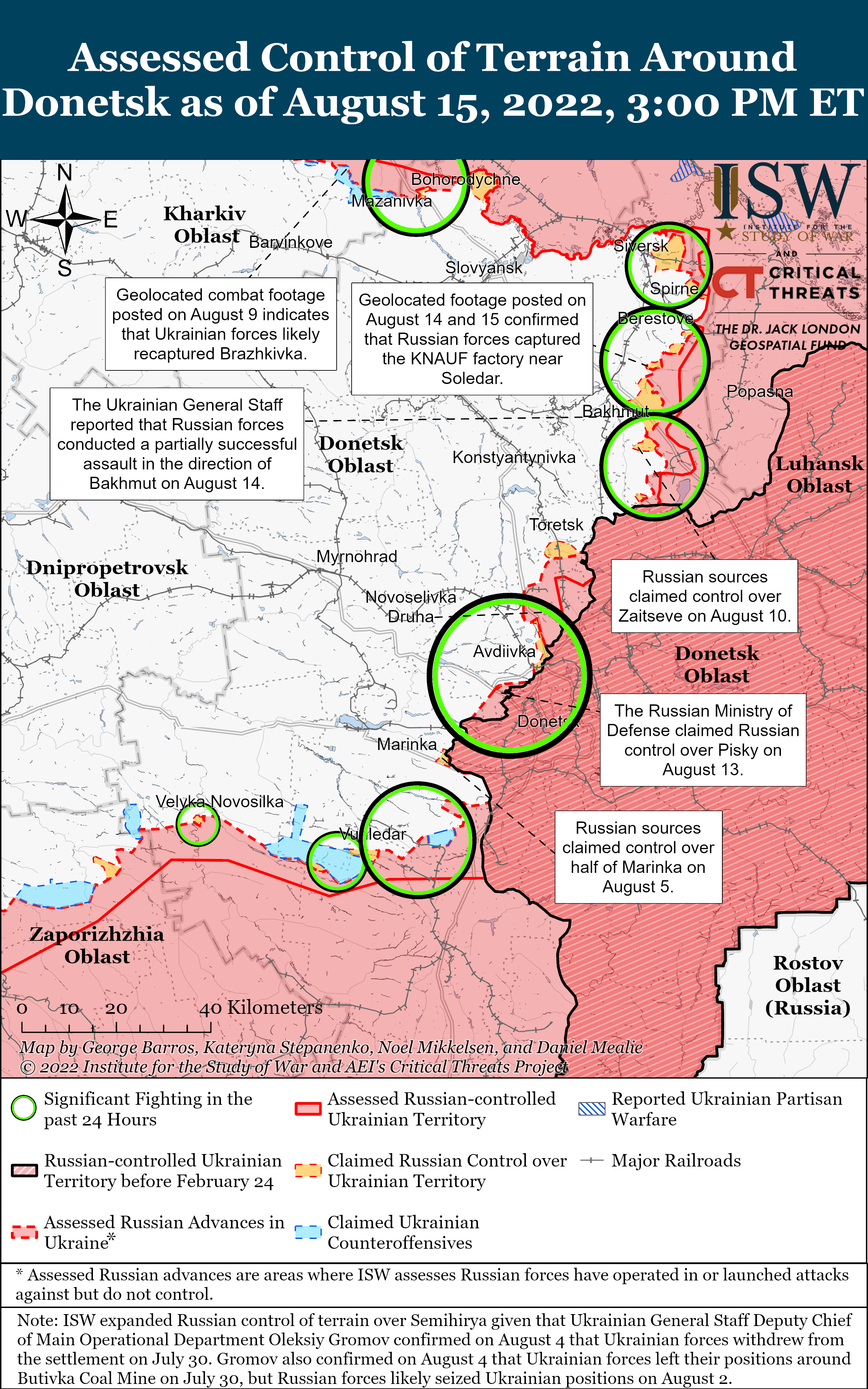 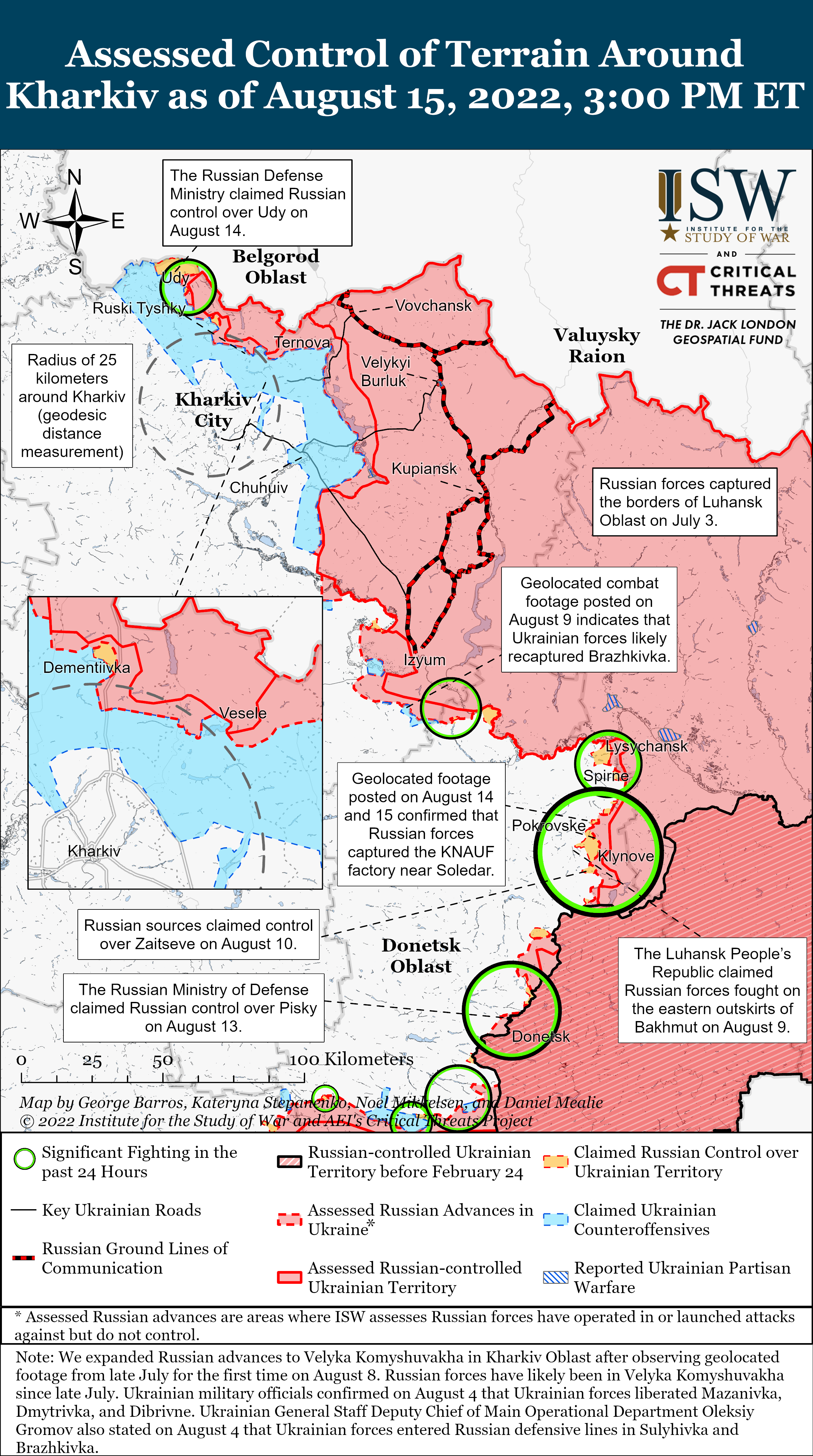 Russian and Ukrainian forces again exchanged accusations of shelling the Zaporizhzhia Nuclear Power Plant (ZNPP) in Enerhodar, Zaporizhia Oblast on August 15. Russian sources claimed that Ukrainian forces fired Western-provided M777 rounds at Enerhodar, but provided no evidence for these claims.[31] Russian sources also rejected the August 14 international call for Russian forces to leave the territory of the Zaporizhzhia NPP and doubled down on accusing Ukrainian forces of shelling the NPP and Western states of overinvolvement and misplaced blame.[32] Russian forces shelled Nikopol and Marhanets (across the Dnipro River from Enerhodar) with MLRS systems.[33]

Russian forces did not conduct any reported ground assaults on the Southern Axis on August 15 but continued shelling across the entire southern front line.[34] Ukraine’s Southern Operational Command reported that Russian forces on the Southern Axis have not changed their troop composition or position as of August 15.[35] Kherson Oblast Military Administration Head Serhiy Khlan stated on August 15 that Ukrainian strikes on the bridges leading to upper Kherson Oblast have rendered the bridges inoperable to heavy equipment.[36] The Ukrainian General Staff reported that Russian forces conducted airstrikes on Andriivka, Bilohirka, and Lozove near the Ukrainian bridgehead over the Inhulets River in northwestern Kherson Oblast, and near Myrne and Blahodatne, northwest of Kherson City.[37] Russian forces also conducted airstrikes on Shcherbaky on the T0812 highway, and Charivne south of Tavriiske, Zaporizhia Oblast.[38] Ukraine’s Southern Operational Command also reported that Russian forces launched missiles from S-300 air defense systems on educational and civilian infrastructure in Mykolaiv City.[39] Russian forces continued shelling along the line of contact.[40]

Ukraine’s Southern Operational Command reported that Ukrainian forces struck Russian ammunition depots in Blahodativka near the bridgehead at Lozove, and Novopetrivka in northern Kherson Oblast.[41] Ukrainian sources reported that Ukrainian partisans blew up a rail bridge on the southwestern outskirts of Melitopol on August 13 that Russian forces frequently used to transport military equipment between the south and the east.[42] 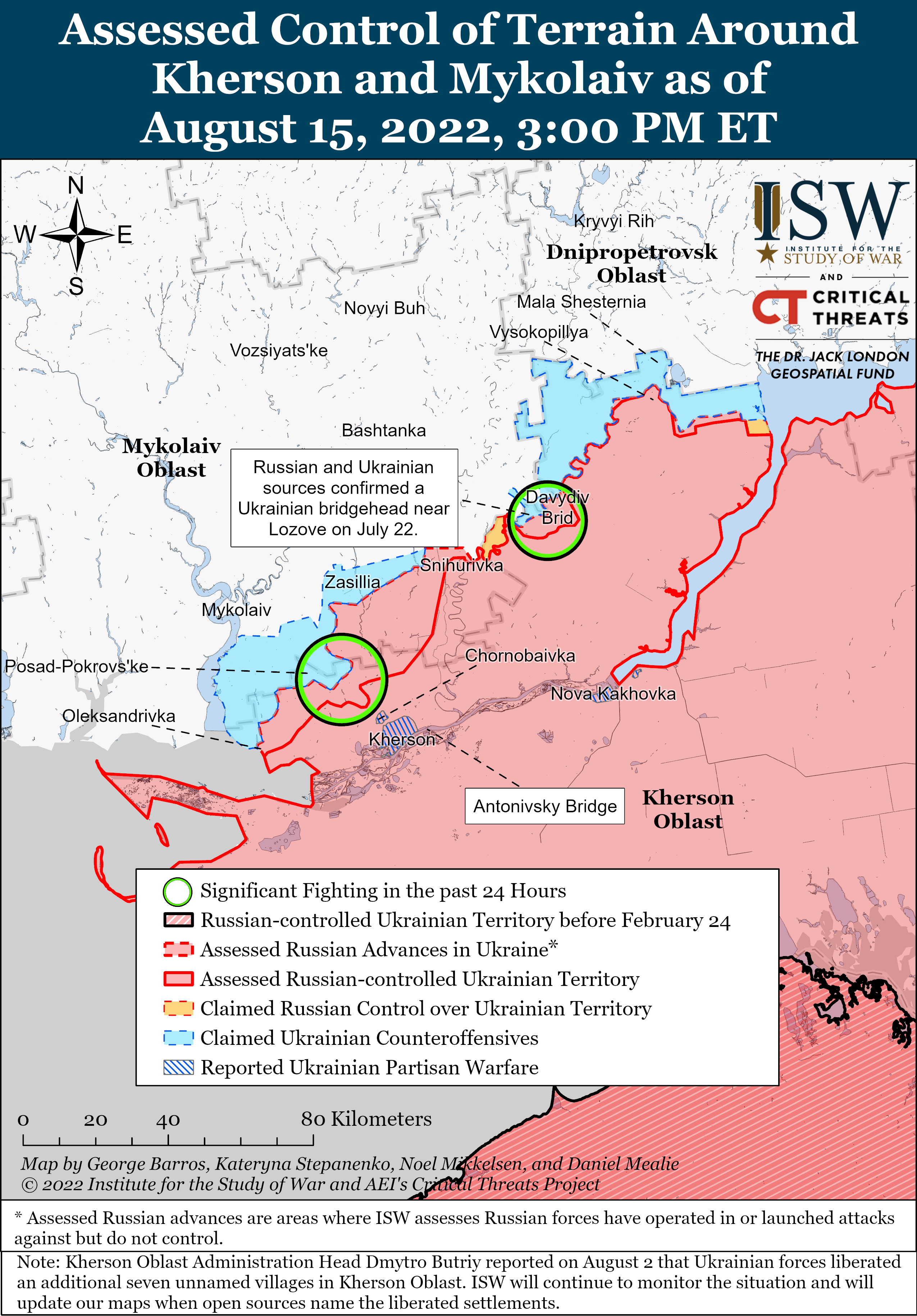 These letters and calls are not conscription notices and do not indicate that Russia has instituted general conscription, as men who have responded to the summonses discussed prospects for contract service with military recruiters. Russian law also requires conscripts to receive written notice of conscription.[45] Russian lawyers have previously warned that military recruitment centers illegally mimic conscription notices left at the mailbox or via spam calls to lure men to sign military contracts upon arrival to the center, but such deception is not a part of Russia’s biannual conscription drive.[46] Russian Telegram channels previously featured reports of men receiving similar misleading summonses in Moscow, Rostov-on-Don, Tyumen, Perm, and Tolyatti cities the week of the Russian invasion of Ukraine on February 24.[47]

St. Petersburg officials’ denial of the distribution of summonses is a microcosm of the Kremlin’s fear of public pushback should Russia attempt to conduct a full-scale mobilization. Social media comments under the Fontanka article discounted the letters as another attempt to scare men into signing military contracts on their own terms (with high pay and benefits) rather than waiting until general mobilization.[48] These commenters also expressed their knowledge of their rights and Russian conscription laws, which indicates that St. Petersburg residents are prepared to oppose illegal efforts at coercive mobilization. St. Petersburg is home to many conscription lawyers and human rights organizations, such as the Soldiers’ Mothers of St. Petersburg, which could explain the unsurprised reaction of local social media users.[49] The distribution of the summonses also indicates that the Kremlin is continuing its pre-war attempts to mislead and coerce men who are unaware of their rights into signing military contracts to reinforce Russian war efforts in Ukraine.

Russian occupation authorities continued setting conditions for long-term Russian control of occupied territories in Ukraine. The UK Ministry of Defense reported on August 15 that Russian occupation officials are likely in the “advanced planning stages” for a referendum to join Russia but that it is unclear if they have determined to proceed with a vote.[53] Ukrainian Kherson Oblast Administration Advisor Serhiy Khlan reported on August 14 that Russian occupation authorities are planning a seminar for educators in occupied territories and Russian officials, including Russian Minister of Education Sergey Kravtsov, in Henichesk on August 26-27.[54] The aim of this seminar is likely to coordinate education integration with Russia.[55] Khlan also stated that Russian officials plan to launch the propaganda TV company “Tavria” on August 15, emphasizing that “Tavria” newspapers previously spread in Kakhovka, Kherson Oblast, presenting Ukrainian authorities as “fascists.”[56] The Russian Ministry of Internal Affairs (MVD) reported that Kherson car owners received the first batch of Russian-model license plates and driver’s licenses on August 12.[57]

Russian authorities continued incentivizing Russian citizens to work in occupied territories in Ukraine. The Ukrainian Military Intelligence Directorate (GUR) reported on August 15 that the Russian government is offering Belgorod Oblast administration employees and employees of Russian state institutions double their salaries to work in the Donetsk and Luhansk Peoples’ Republics (DNR and LNR).[58] GUR also stated that Belgorod Oblast leadership is responsible for supporting occupation efforts in Bilokurakyne and  Troitske, Luhansk Oblast, and that Belgorod Oblast teachers will start working in these areas in September.[59]

Note: ISW does not receive any classified material from any source, uses only publicly available information, and draws extensively on Russian, Ukrainian, and Western reporting and social media as well as commercially available satellite imagery and other geospatial data as the basis for these reports.  References to all sources used are provided in the endnotes of each update.