Russian military leadership is engaged in a campaign to present itself as part of an effective wartime apparatus in an effort to address the public perception of Russian failures in Ukraine. The Russian Ministry of Defense (MoD) posted footage on December 18 reportedly of Russian Defense Minister Sergei Shoigu on a working trip to the Southern Military District (SMD) and inspecting the Russian force grouping in the combat zone in Ukraine.[1] Shoigu reportedly received briefings from field commanders and spoke directly with personnel on the frontline paying “special attention to the organization of comprehensive support for the troops, the conditions for deploying personnel in the field, as well as the work of medical and rear units.”[2] The Russian MoD posted footage on December 17 of Shoigu attending a meeting with Russian President Vladimir Putin, Chief of the General Staff Valery Gerasimov, and Commander of the Joint Group of Forces in Ukraine Sergei Surovikin to discuss near and mid-term proposals for Russian operations in Ukraine.[3] Shoigu’s recent engagements suggest that the Russian MoD is attempting to bolster its reputation as an effective military organ in the face of consistent criticism of its conduct of the war by the pro-war community. The recent concerted efforts by Russian military officials to present themselves as actively engaged in planning and controlling the war effort, especially in the absence of tangible military victories in Ukraine, may suggest that Russia is preparing for a renewed offensive against Ukraine in the coming months. Shoigu’s visit to the SMD—with its focus on sustainment and medical support—is likely part of an effort to show that the military leadership is fixing the Russian military’s devastating failures in those areas that have been the subject of constant angry commentary by milbloggers and protests by soldiers and their families.

Putin’s planned December 19 meeting with Belarusian President Alexander Lukashenko is likely part of the same effort to present proactivity as well as an effort to set information conditions for a new phase of the war. Commander of the Ukrainian Combined Forces Serhiy Nayev commented on the upcoming Putin-Lukashenko meeting and noted that it comes after Putin’s December 17 meeting with the Russian military command to discuss both immediate and mid-term goals for the war.[4] Nayev reported that the Ukrainian government believes Putin will discuss the wider involvement of Belarusian forces in further Russian aggression against Ukraine, which is consistent with ISW’s forecast for the meeting.[5] Taken in tandem, Putin’s meeting with the Russian command, Shoigu’s purported frontline visit, and the Putin-Lukashenko meeting suggest a new phase in the presentation, planning, and conduct of the war and may presage renewed offensive operations against Ukraine in the coming months.

The capacity of the Russian military, even reinforced by elements of the Belarusian armed forces, to prepare and conduct effective large-scale mechanized offensive operations in the next few months remains questionable, as other analysts have observed.[6] The manpower Russia is generating from mobilized reservists and from the annual fall conscription cycle will not be sufficiently trained to conduct rapid and effective mechanized maneuver this fall. Russia’s struggles to keep the forces it currently has fighting in Ukraine equipped with tanks, artillery, long-range strike, and other essential materiel are very unlikely to be resolved in time to equip a large new force for offensive operations this winter. Putin may nevertheless order renewed large-scale offensive operations later this winter, but it is important not to overestimate the likely capabilities of Russian or combined Russo-Belarusian forces to conduct them successfully. ISW continues to assess that it is unlikely that Lukashenko will commit the Belarusian military (which would also have to be re-equipped) to the invasion of Ukraine.

Wagner Group financier Yevgeny Prigozhin continued efforts to legitimize the Wagner Group as a parastatal armed force and increase his own power base by lobbying for increased state benefits for Wagner Group personnel who fought in Ukraine. Prigozhin complained on December 18 that the local St. Petersburg authorities refused to bury a Wagner Group fighter in burial grounds for participants of the “special operation” and instead intend to relegate private military company (PMC) fighters to a separate section, which Prigozhin called humiliating.[7] Prigozhin released a letter appealing to Russian State Duma Defense Committee Chairperson Andrey Kartapolov to extend combat veteran status to Wagner Group fighters.[8] Some Russian milbloggers expressed support for this measure, claiming that any Russian citizen who fights and dies in Ukraine deserves to be buried with full military honors.[9] Prigozhin’s appeal does not include fighters of other PMCs, however.[10] Prigozhin previously expressed his support for a similar measure on November 8 when the State Duma considered and passed a bill extending combat veteran status to Russian military volunteers.[11] Prigozhin has notably feuded with Russian regional authorities in Belgorod Oblast and St. Petersburg, as ISW has previously reported.[12]

Prigozhin’s bid for increased recognition comes as reports of systematic executions within Wagner forces emerge, suggesting that Wagner leadership is willing to go to great lengths to preserve the Wagner Group’s image as a highly disciplined force.[13] Russian opposition outlet The Insider reported on December 16 that Wagner forces routinely execute deserters and those who refuse to fight, especially those recruited from penal colonies.[14] The Insider reported that Wagner has its own internal security forces to conduct the executions and that one commander—who commanded executed POW Yevgeny Nuzhin—personally witnessed several executions.[15] Prigozhin previously expressed public support for Nuzhin’s execution, as ISW has previously reported.[16] Such reports also indicate that Wagner Group forces struggle with morale and discipline issues among new recruits similar to those of conventional Russian forces but combat it with harsh punishments rather than the obfuscation and attempts to appease dissatisfied recruits that characterize the Russian MoD’s general approach. 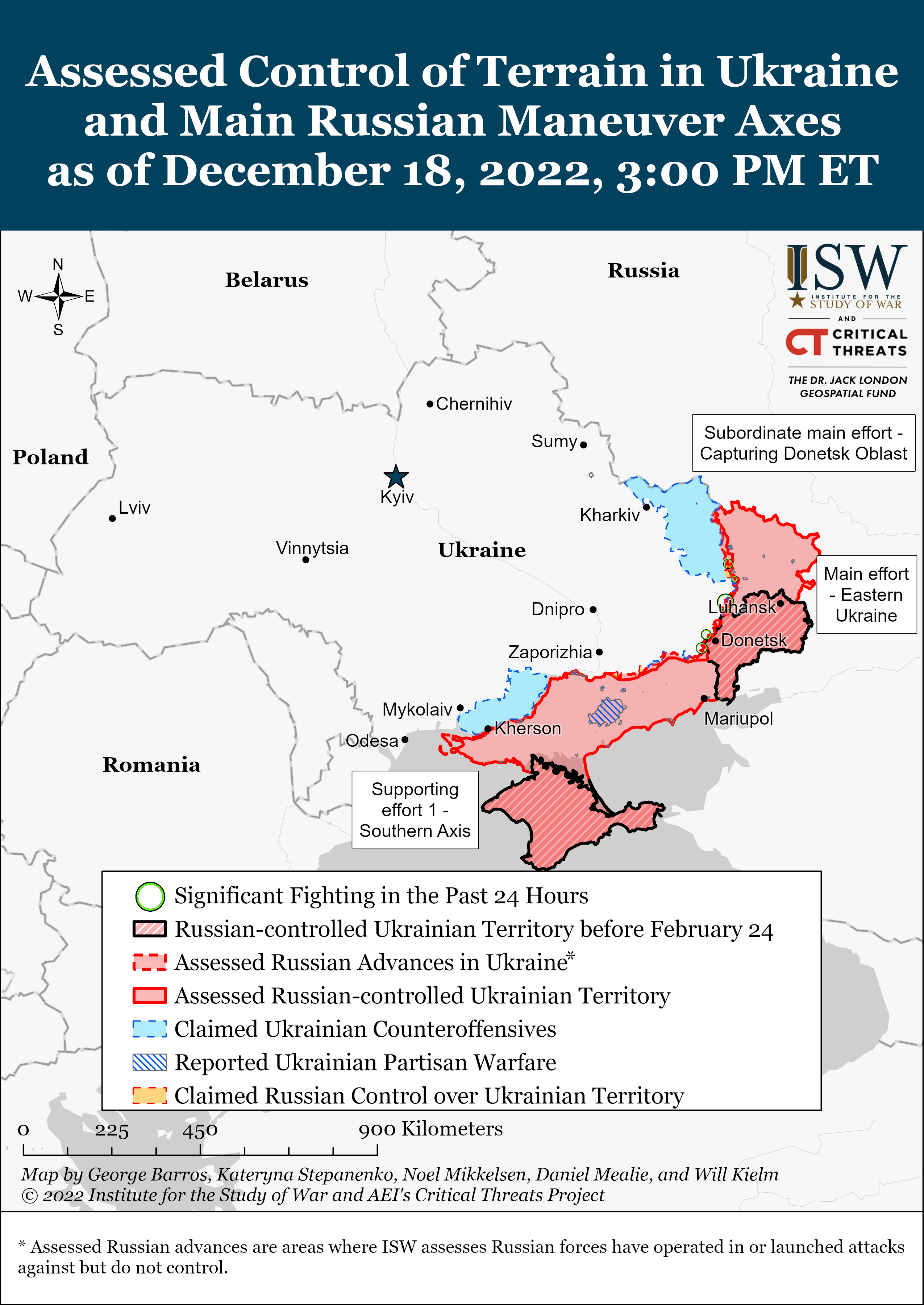 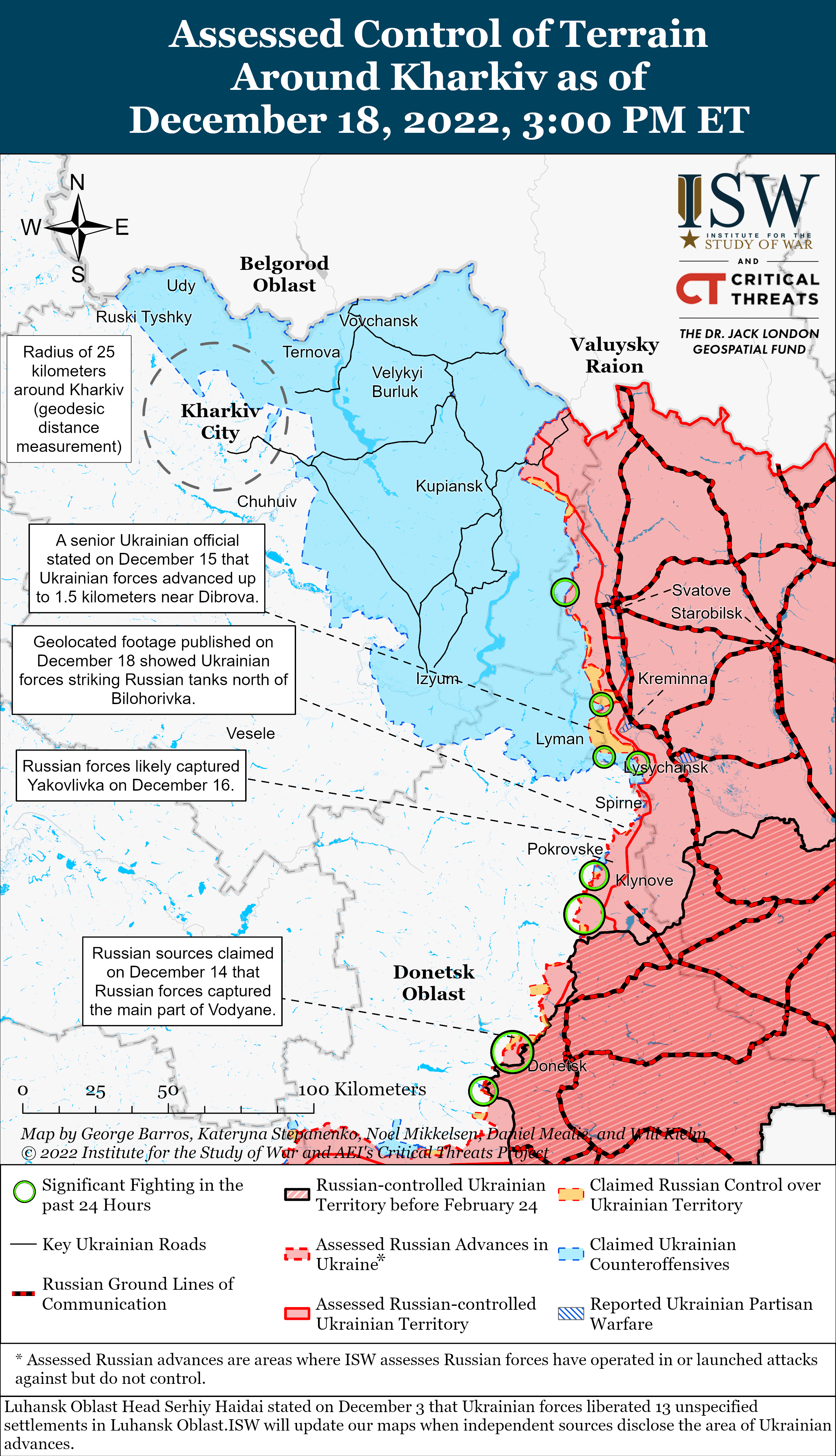 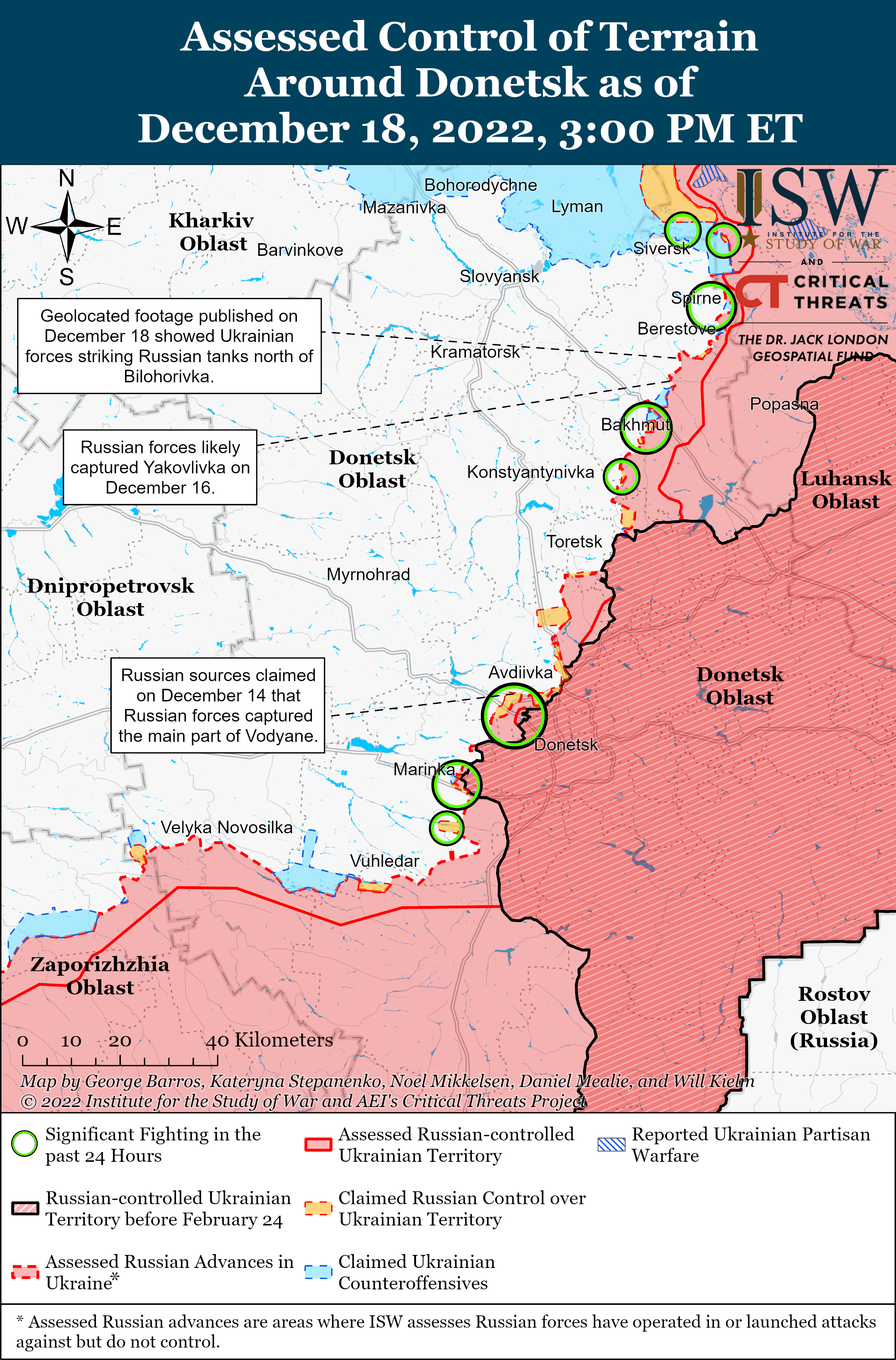 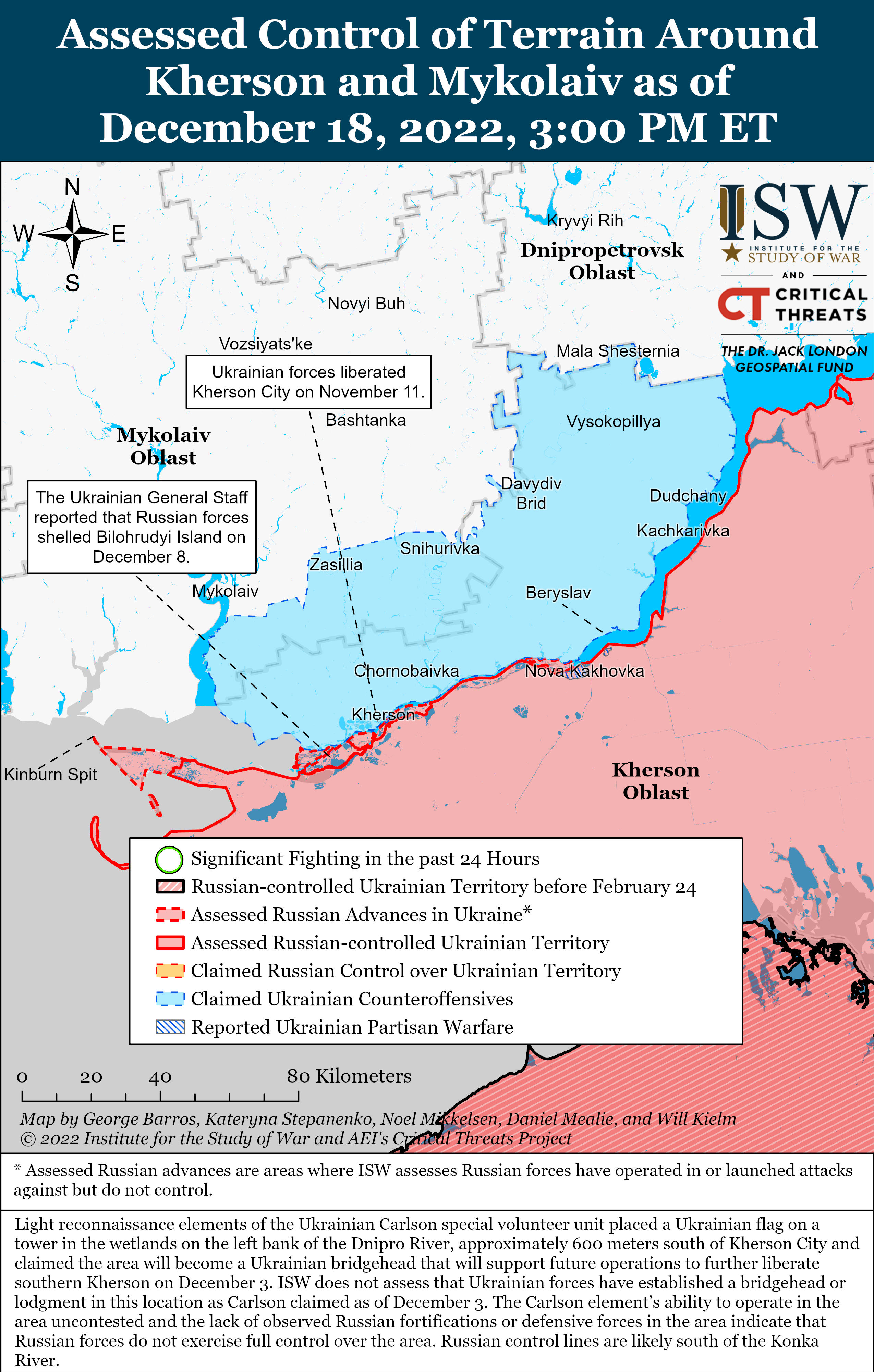