The UK Ministry of Defense assesses that the Kremlin’s continued framing of its invasion of Ukraine as a “special military operation” rather than a war is actively hindering Russian force generation capabilities. The UK Ministry of Defense reported on June 19 that Russian authorities are struggling to find legal means to punish military dissenters and those who refuse to mobilize because the classification of the conflict in Ukraine as a “special military operation” precludes legal punitive measures that could be employed during a formal war.[1] ISW has previously assessed that the Kremlin’s framing of the war as a “special operation” is compounding consistent issues with poor perceptions of Russian military leadership among Russian nationalists, problems with paying troops, lack of available forces, and unclear objectives among Russian forces. The Kremlin is continuing to attempt to fight a major and grinding war in Ukraine with forces assembled for what the Kremlin incorrectly assumed would be a short invasion against token Ukrainian resistance. The Kremlin continues to struggle to correct this fundamental flaw in its “special military operation.”

Russian authorities likely seek to use war crimes trials against captured Ukrainian servicemen, particularly troops that defended Mariupol, to advance its narratives around the war. Russian sources reported that the authorities of the Donetsk People’s Republic (DNR) plan to hold war crimes tribunals until the end of August 2022 and that at least one of these tribunals will be held in Mariupol.[2] These tribunals will reportedly be judged in accordance with DNR legislation (which notably allows capital punishment, unlike Russian law) and be modeled on the Nuremberg format for war crimes trials. The trials are a sham attempt to try lawful prisoners of war as war criminals and support the Kremlin’s false framing of its unprovoked invasion of Ukraine as a ”de-Nazification” operation. Despite the fact that DNR authorities plan to try Ukrainian servicemen in the DNR, a source in Russian law enforcement told state-owned media outlet TASS that the deputy commander of the Azov Regiment and the commander of the Ukrainian 36th Marine Brigade will both be transferred to Russia for investigation and trial.[3] Russian authorities will likely use these trials to strengthen legal controls of occupied areas and further demoralize Ukrainian defenders by setting a harsh legal precedent during preliminary tribunals, as well as advancing the Kremlin’s false narrative of invading Ukraine to “de-Nazify” it. 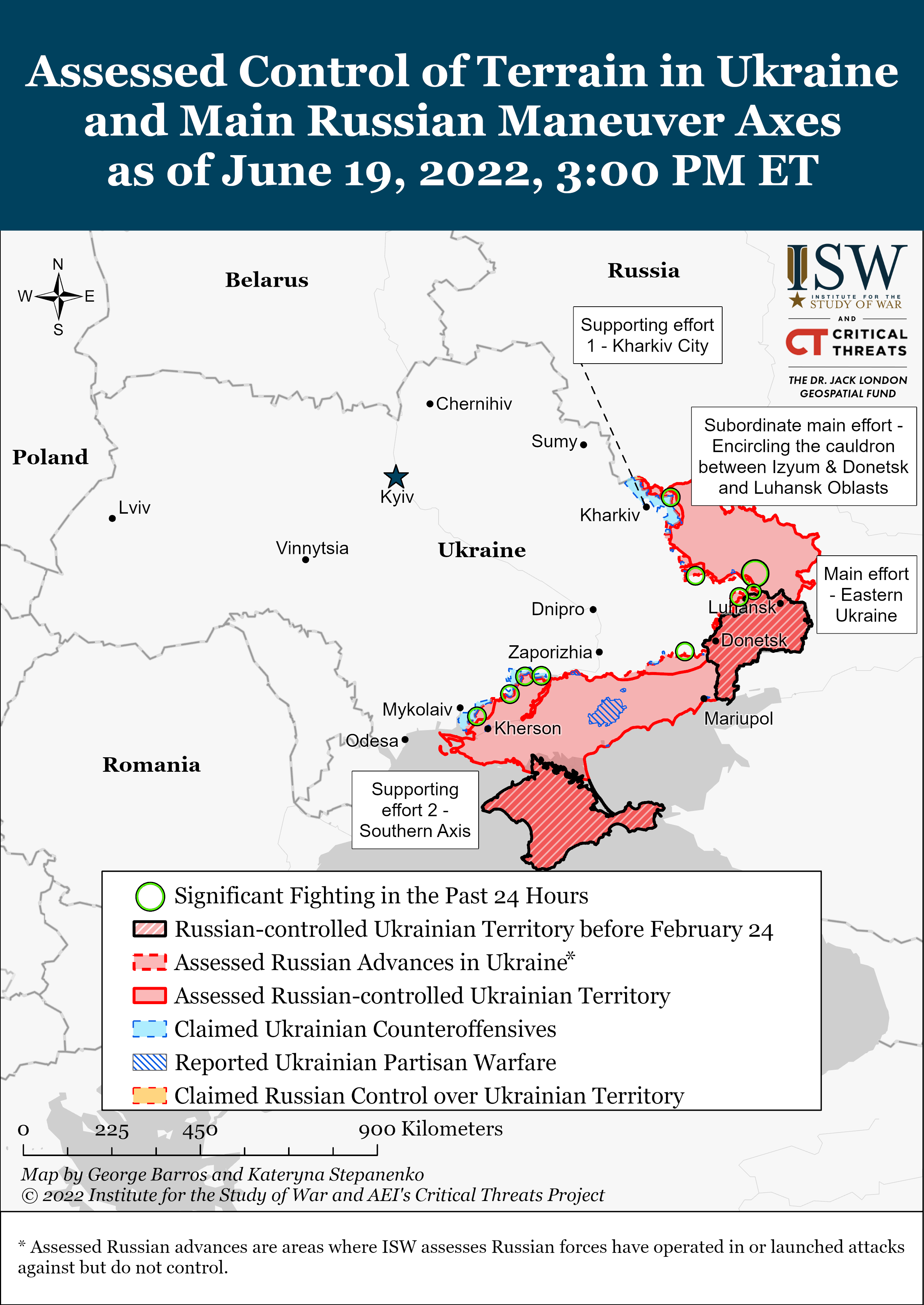 Concentrated Russian artillery power paired with likely understrength infantry units remains insufficient to enable Russian advances within Severodonetsk, as Russian troops continued to fight for control of the city but made few gains on June 19. Russian forces continued efforts to encircle the remaining Ukrainian troops in the Azot industrial plant.[4] Russian Telegram channels additionally claimed that Russian forces are advancing on Lysychansk from the south and fighting in Berestove, Spirne, Vovchoyarivka, and the Lysychansk Oil Refinery.[5] Russian troops conducted airstrikes around Severodonetsk and Lysychansk and strengthened their grouping to the south of the area around Orikhove and Toshkivka.[6] Russian forces likely seek to levy their attempts to interdict the T1302 Bakhmut-Lysychansk highway to support offensive operations in Lysychansk.

Russian forces continued to prepare for offensive operations toward Slovyansk from southeast of Izyum and west of Lyman but did not make any confirmed advances in either direction on June 19. Russian forces conducted reconnaissance and artillery strikes against Ukrainian positions southeast of Izyum around Dibrove, Virnopillya, Kurulka, Bohorodychne, and Dolyna, as well as to the west of Lyman.[7]

Russian forces continued offensive operations to the east of Bakhmut to interdict Ukrainian lines of communication along the T1302 Bakhmut-Lysychansk highway on June 19. Russian forces reportedly fought around Nyrkove, Mykolaivka, and Berestove and conducted air, artillery, and missile strikes against Ukrainian positions east of Bakhmut and near the T1302.[8] Russian forces will likely continue efforts to gain access to the T1302 in order to support operations in Severodonetsk and Lysychansk, especially as fighting in the area has largely stalled and Russian forces are increasingly unable to consolidate control of the city, even with artillery superiority. 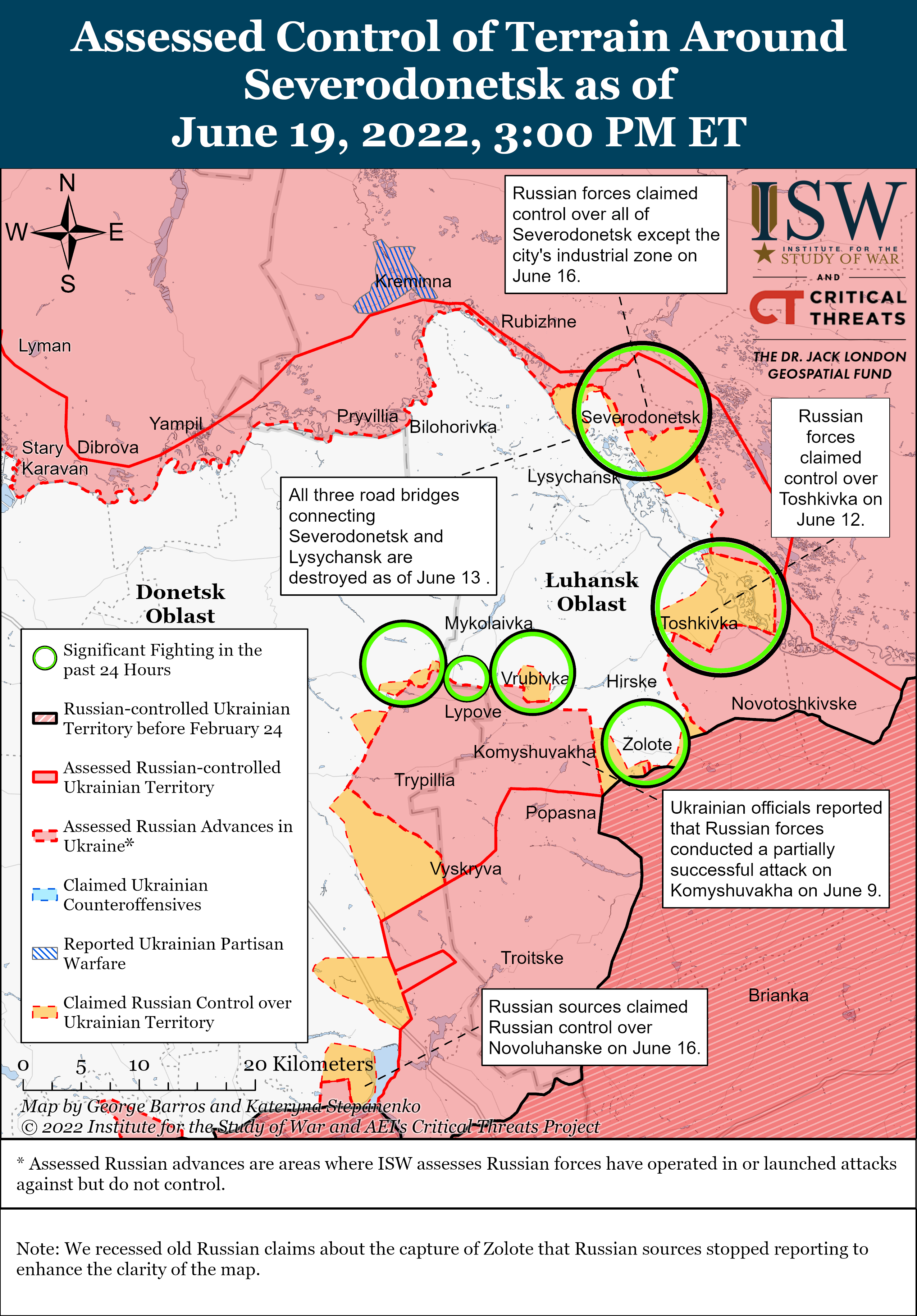 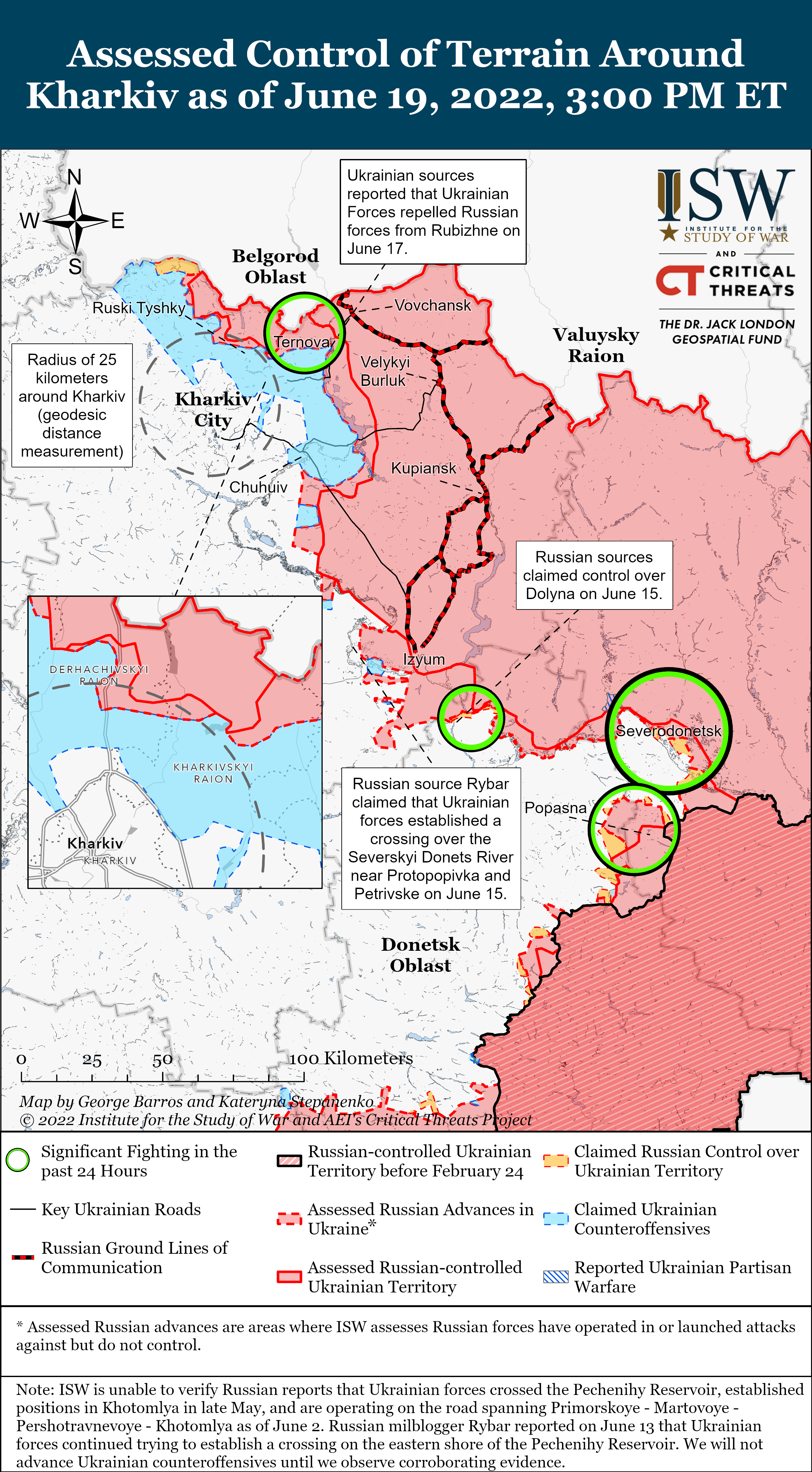 Recent Ukrainian counterattacks have forced Russian troops to focus on maintaining their defensive positions along the Southern Axis on June 19.[11] The Ukrainian General Staff reported that Russian forces in Kherson Oblast are strengthening their air-defense systems in the area, likely in response to continual, successful Ukrainian aviation attacks against Russian forces south of Davydiv Brid.[12] Mayor of Melitopol Ivan Fedorov claimed that Ukrainian troops are approaching the Kherson Oblast.[13] While ISW cannot independently confirm the current positions of Ukrainian troops, it is likely that localized Ukrainian counterattacks continue to push back Russian forces, especially along the Kherson-Mykolaiv Oblast border, and Ukrainian forces may be able to further threaten Kherson City in the coming weeks.

Russian forces are continuing to accumulate equipment and manpower in central Zaporizhia Oblast, specifically along the Dniprorudne-Vasylivka-Orikhiv line, likely in response to Ukrainian counterattacks.[14] Fedorov stated that Ukrainian forces pushed the Zaporizhia Oblast frontline 10 km south. Ukrainian officials have previously reported that the Zaporizhia frontline shifted five to seven kilometers south and it is unclear whether Ukrainian forces have advanced 10 km in total or in addition to these earlier advances. Ukraine’s Zaporizhia Regional Military Administration stated that Russian troops are moving equipment and vehicles from Crimea through Melitopol toward the Vasylivka and Polohy areas and that Russian sabotage groups clashed with Ukrainian troops near the Zaporizhia-Donetsk Oblast border on June 19.[15] Russian forces are likely accumulating troops in Zaporizhia Oblast to defend against ongoing Ukrainian counterattacks towards Melitopol that could threaten Russian control of the city.

Russian forces continued missile and artillery strikes against various locations in Kherson, Zaporizhia, Dnipropetrovsk, Mykolaiv, and Odesa Oblasts.[16] Although Ukrainian air defense intercepted missiles before they struck Odesa directly, Ukraine’s Southern Operational Command noted that Russian forces likely targeted Odesa and other areas that are not experiencing direct hostilities to exert psychological pressure on the population and undermine local economies.[17] Ukraine’s Southern Operational Command additionally reported that Russian forces are restructuring their naval grouping to include more submarines, which is a likely response to successful Ukrainian attacks on Russian naval assets in the Black Sea.[18] 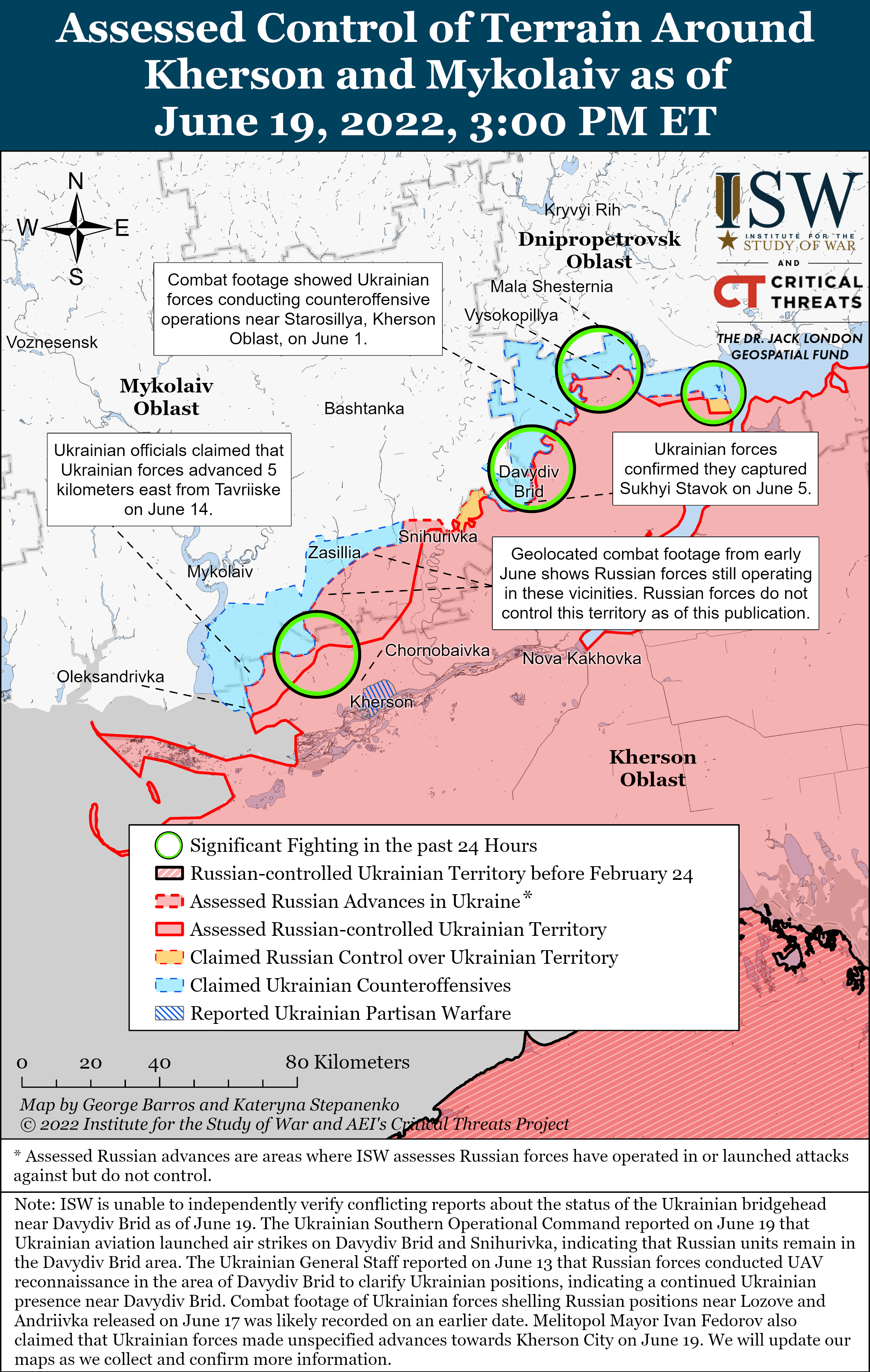 Russian forces are likely employing false-flag artillery strikes against infrastructure in Russian-held areas of Donetsk Oblast in order to dissuade pro-Ukrainian sentiment and encourage the mobilization of proxy forces. Open-source Twitter accounts confirmed ISW’s previous assessment that artillery attacks against Donetsk City were likely conducted from within Russian-held territory, refuting accusations made by Russian authorities that blamed Ukrainian troops for the attacks.[19] Such false-flag attacks are likely being propagated by Russian authorities to create hostility toward the Ukrainian military.