Russian forces are completing the reinforcement and resupply of their troops north and west of Kyiv and launching an envelopment of the capital likely aimed at encircling and ultimately capturing it. This effort will likely accelerate in the next 24-48 hours. Russian operations against Kyiv are Moscow’s main effort. Russian troops are also undertaking three supporting efforts, one to seize Kharkiv, one to take Mariupol and secure the “land bridge” connecting Rostov-on-Don to Crimea, and one to secure Kherson and set conditions for a drive west toward Mykolayiv and Odesa. The three supporting operations are active, with the operation against Mariupol making the most progress in the last 24 hours.

The Russian attack on Kyiv likely consists of a main effort aimed at enveloping and ultimately encircling the city from the west and a supporting effort along the axes from Chernihiv and Sumy to encircle Kyiv from the east. The long Russian column of combat and logistics vehicles north of Kyiv is likely setting conditions for the envelopment to the west, although it could also support attacks directly into the city from the positions Russian forces maintain in Kyiv’s northwestern outskirts. Russian forces are more likely to pursue the envelopment/encirclement than a direct assault into the city.

The Russian military has continued using area-attack weapons in the city of Kharkiv, dramatically increasing the damage to civilian infrastructure and civilian casualties. Russian forces have not reportedly attempted large-scale ground operations against Kharkiv in the last 24 hours but are likely instead using air, missile, and artillery bombardment to set conditions for a renewed ground attack sometime in the next 24-48 hours. Russian ground forces appear likely to conduct another frontal assault on Kharkiv from the northeast rather than attempt to envelop or encircle the city.

Russian forces in the south appear to be holding their positions south of Zaprozhya, fighting to reduce Ukrainian positions in Kherson and seize that city, and encircling Mariupol to set conditions to seize it. Russian operations in the south do not appear to pose an imminent danger to Odesa within the next 24 hours. A Russian drive north through or near Zaprozhya to cut off Ukrainian forces fighting along the line of contact also appears very unlikely in the next 24-72 hours.

Russian troops claim to have encircled Mariupol and have reportedly entered the city of Kherson in the south.

Russian forces are receiving needed supplies and reinforcements that may facilitate much more rapid and effective operations in the coming 24-72 hours. The Russian effort around Kyiv remains poorly organized, however, with elements of many different battalions combined into what seem to be ad hoc groupings rather than operating under standing regiment or brigade headquarters. The initial errors in the Russian force composition and organization in Belarus and western Russia that ISW has previously reported on, which contributed to Russian logistical and operational failures around Kyiv, will be difficult to remedy quickly and will likely continue to cause friction and reduce the effectiveness of Russian operations even as supply issues are addressed and reinforcements come into the fight.[1] It remains too early to evaluate the likely effective combat power the added Russian troops will bring. 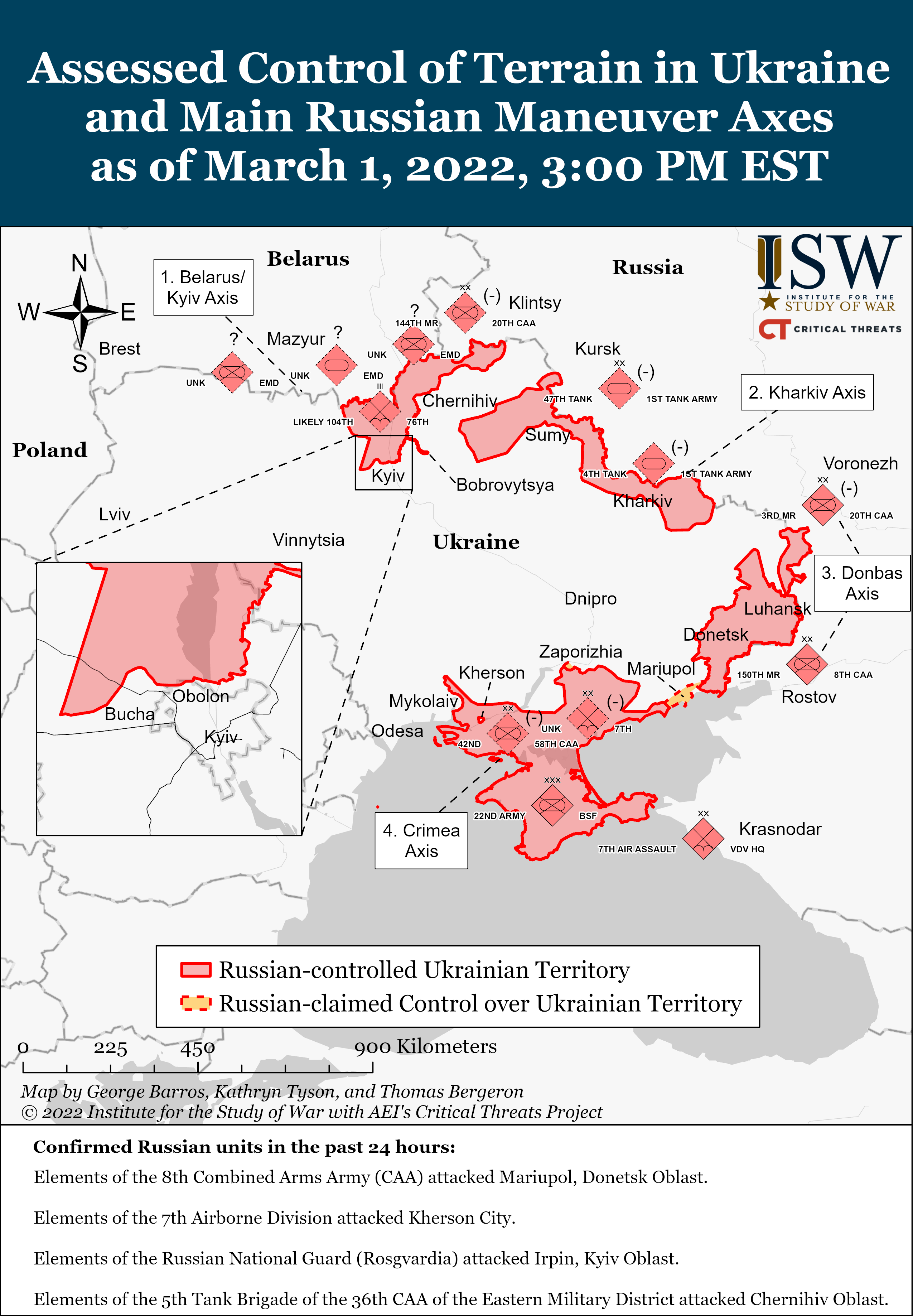 Main Effort—Kyiv Axis: Russian forces continue to move into position and to resupply in preparation for a likely attempt to envelop Kyiv from the west.[2] Russian operations on this axis consist of a main effort aimed at enveloping and ultimately encircling the city from the west and supporting efforts along the Chernihiv and Sumy axes to encircle it from the northeast and east.

Supporting Effort #1—Kharkiv: Russian forces remain unable to seize the city and have apparently concentrated on an air, missile, and artillery bombardment likely intended in part to enable a subsequent renewed ground offensive. Russian forces have used bombers, tube artillery, multiple-launch rocket systems (MLRS), and reportedly thermobaric weapons against Kharkiv.[16] Russian ground forces remain positioned near the city and may commence renewed offensive operations within the next 24-72 hours. The Russian air, artillery, and missile barrage may also be intended to generate panic and reduce the morale of Ukrainian defenders in Kharkiv and elsewhere. It is unlikely to achieve that effect. It is too early to evaluate the likelihood that a renewed Russian ground offensive will succeed in taking the city.

Supporting Effort #2—Mariupol: Russian forces claim to have completed the encirclement of Mariupol by land and sea on March 1.[17] The Ukrainian General Staff reported that elements of Russia’s 8th Combined Arms Army and proxy forces of the Donetsk People’s Republic tried and failed to take Mariupol on March 1.[18] Multiple sources report heavy fighting around the city, but ISW has been unable to verify Russian claims of having encircled it nor identify the forward trace of Russian and proxy positions near it.[19] ISW assesses with low confidence that Russian forces have completed the encirclement of Mariupol and will seek to compel the Ukrainian defenders to surrender or attack to seize it within the coming 24 hours.

Supporting Effort #3—Kherson and West: Russian forces have likely secured control of Kherson city and are consolidating there before continuing their advance to the west. Multiple sources reported elements likely of the 7th Airborne Division and SPETSNAZ units throughout Kherson City on March 1, and Ukrainian forces will likely lose control of the city within the next 24-48 hours.[20]