Russian forces continued to settle in for a protracted and stalemated conflict over the last 24 hours, with more reports emerging of Russian troops digging in and laying mines—indications that they have gone over to the defensive. Ukrainian forces continued to conduct limited and effective counterattacks to relieve pressure on Kyiv, although the extent of those counterattacks is likely less than what some Ukrainian officials are claiming. Russian efforts to mobilize additional forces to keep their offensive moving continue to be halting and limited. Russian progress in taking Mariupol city remains slow and grinding. Increasing Russian emphasis on using air, artillery, and rocket/missile bombardments of Ukrainian cities to offset forward offensive momentum raises the urgency of providing Ukraine with systems to defend against these attacks. 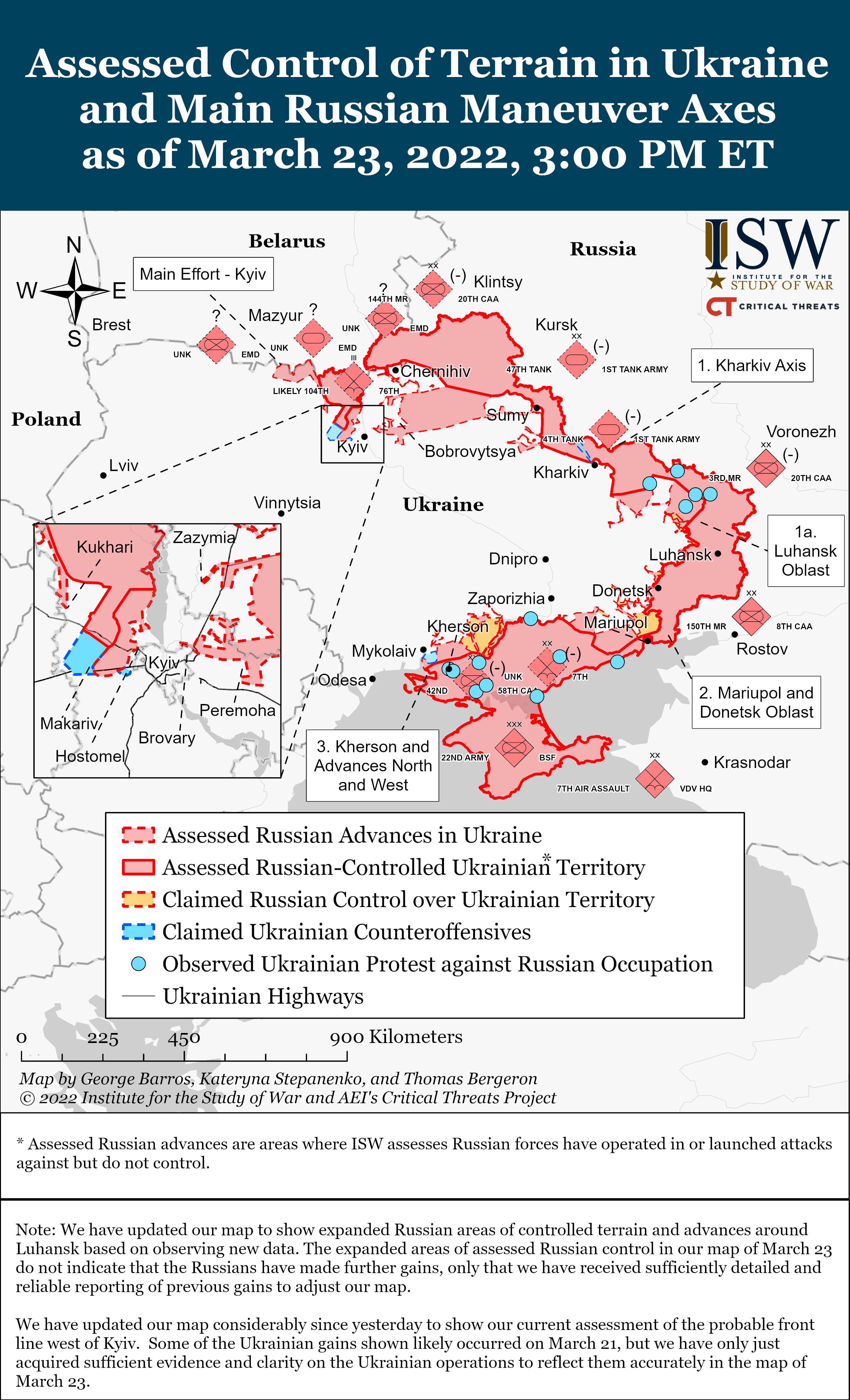 Russian efforts to bring Syrian forces into Ukraine may be encountering challenges. Ukrainian military intelligence (GUR) reports that a Russian commander in Syria met with the commander of the Syrian Arab Army’s 8th Brigade to request a list of Syrian personnel ready to fight in Ukraine, but that the Syrian commander promised only to respond after consulting with his colleagues.[1] We have no independent verification of this report. ISW’s Middle East Team is preparing a brief report on Russian efforts to mobilize Syrian forces to support the war in Ukraine and will publish it in the coming days.

Russian mobilization efforts are likely becoming urgent given Russian losses in the war. The Wall Street Journal cites an unnamed NATO official claiming that Russia has lost as many as 40,000 troops killed, wounded, or missing of the roughly 190,000 deployed to invade Ukraine.[2] That assessment, which is plausible given previous estimates of Russian combat deaths, must be considered in the context of the assessment offered by an unnamed Department of Defense official on March 21 that Russia had committed a high proportion of its available battalion tactical groups to the war already.[3] The protracting pause of Russian offensive operations in Ukraine and increasing anecdotal reporting of breakdowns in the morale and capability of Russian combat units all accord with these assessments. These reports and assessments collectively suggest that Russia may not be able to find new combat power with which to regain offensive momentum for weeks or even months.

Russian forces are increasingly preparing for protracted defensive operations in various parts of the theater. Numerous reports and satellite images of Russian troops digging defensive positions and laying mines suggest that they have gone over to the defensive and do not anticipate conducting renewed large-scale offensive operations in the near future in a number of locations across Ukraine.

Ukrainian forces have launched counterattacks to regain territory occupied by Russian troops, liberating the town of Makariv as noted in the update of March 22. The counterattack, probably conducted primarily by Ukrainian forces from the west of the forwardmost Russian positions, has likely made more significant progress than our map of March 22 showed. We have updated our map considerably since March 22 to show our current assessment of the probable front line west of Kyiv. Some of the Ukrainian gains shown likely occurred on March 21, but we have only just acquired sufficient evidence and clarity on the Ukrainian operations to reflect them accurately in the map of March 23.

We are unable to corroborate most of these claims, particularly the claimed encirclement of large groups of Russian forces or the liberation of Irpin. The head of the Kyiv Oblast military administration stated on March 22 that Russian forces still controlled Bucha and Hostomel, that Ukrainian forces could conduct only local counterattacks, and that Ukrainian troops were preparing for a larger offensive operation—all of which would suggest that Ukrainian troops have likely not yet encircled Russian troops in these areas.[7] These Ukrainian claims may reflect the expectation that the Ukrainian counteroffensive will continue and cut off Russian forces currently in the Irpin salient. We will continue to monitor the situation closely and update our assessment and map if and when we find clear corroborating evidence of these claimed Ukrainian advances.

The Ukrainian General Staff reported on March 23 that Russian forces attempted to advance on Teterivsk, roughly 70 kilometers northwest of Kyiv, but were repelled.[8] A local Ukrainian government social media report supports that assessment.[9] 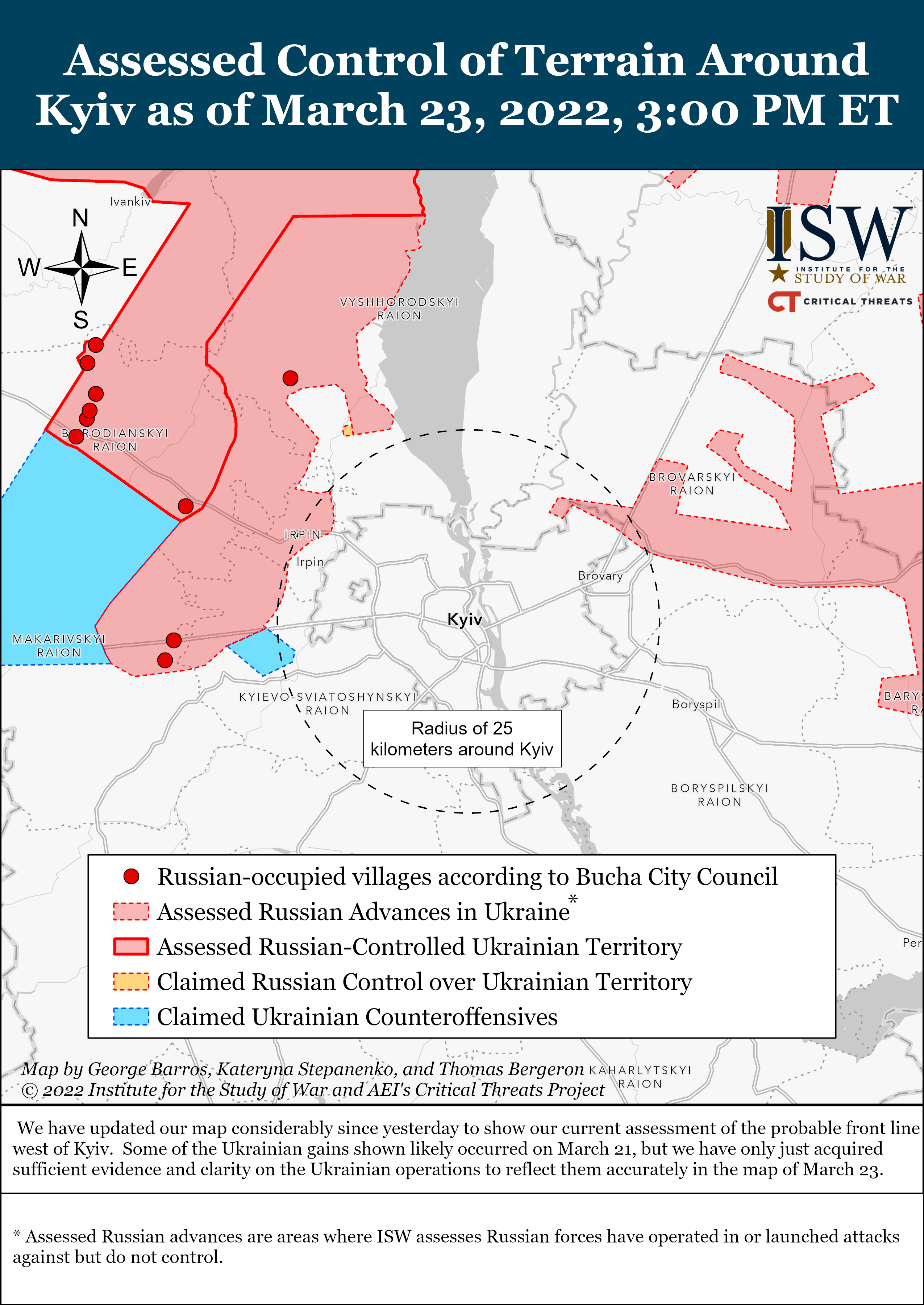 Fighting in and around Chernihiv has continued over the past several days without changing the front line materially.[10]

Russian forces did not attempt new advances in and around Kyiv’s eastern suburbs in the past 24 hours. The Ukrainian General Staff reports that the Russians are continuing to dig themselves in and mine the area, likely indicating that the Russians have gone over to the defensive in these areas.[11]

Russian forces did not conduct any significant offensive operations around Kharkiv or around the city of Izyum, southeast of Kharkiv, on March 23 although limited operations continued.[12]

Russian forces continued efforts to advance in Luhansk and Donetsk oblasts, concentrating on limited ground attacks on Popasna and Avdiivka and missile strikes on Kramatorsk airfield.[13]

Note: We have updated our map of northeastern Ukraine to show Russian control over considerably more terrain than we had previously assessed. This change reflects newly acquired historical data rather than new Russian gains. We do NOT assess that Russian forces have made significant territorial gains in northeastern Ukraine for several days, and the revised control of terrain in this part of the theater does NOT reflect new Russian advances or the consolidation of Russian control. 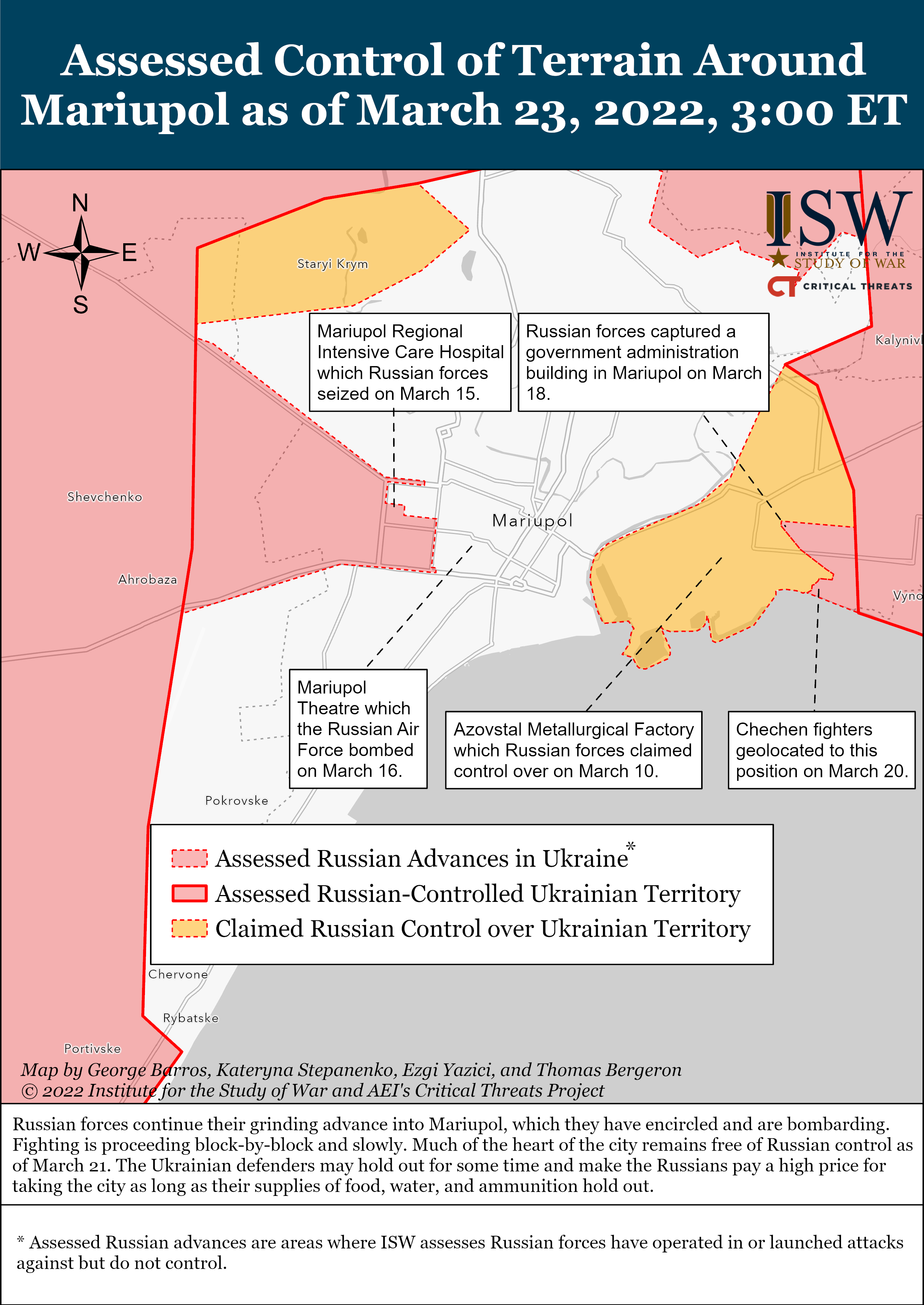 Russian forces in and around Kherson and Mykolayiv, as well as those advancing on Kryvyih Ryh and Zaporizhiya, did not conduct significant offensive operations in the past 24 hours.[15] Ukrainian military intelligence reported that Russian forces are preparing to block the Kerch Bridge to prevent Russians from leaving Crimea.[16] The GUR claims that this measure is a response to panic among Russians in Crimea, particularly those who moved to the peninsula after 2014, especially among the families of Russian military and government personnel. We have no independent verification of these GUR reports.