Russian forces in Ukraine may have entered a possibly brief operational pause on March 5 as they prepare to resume operations against Kyiv, Kharkiv, Mykolayiv, and possibly Odesa in the next 24-48 hours. Russian troops did not launch major ground offensive operations against Kyiv, Kharkiv, or Mykolayiv in the last 24 hours. Ukrainian forces near Kharkiv, on the other hand, conducted a counter-offensive that reportedly penetrated to the Ukrainian-Russian border. 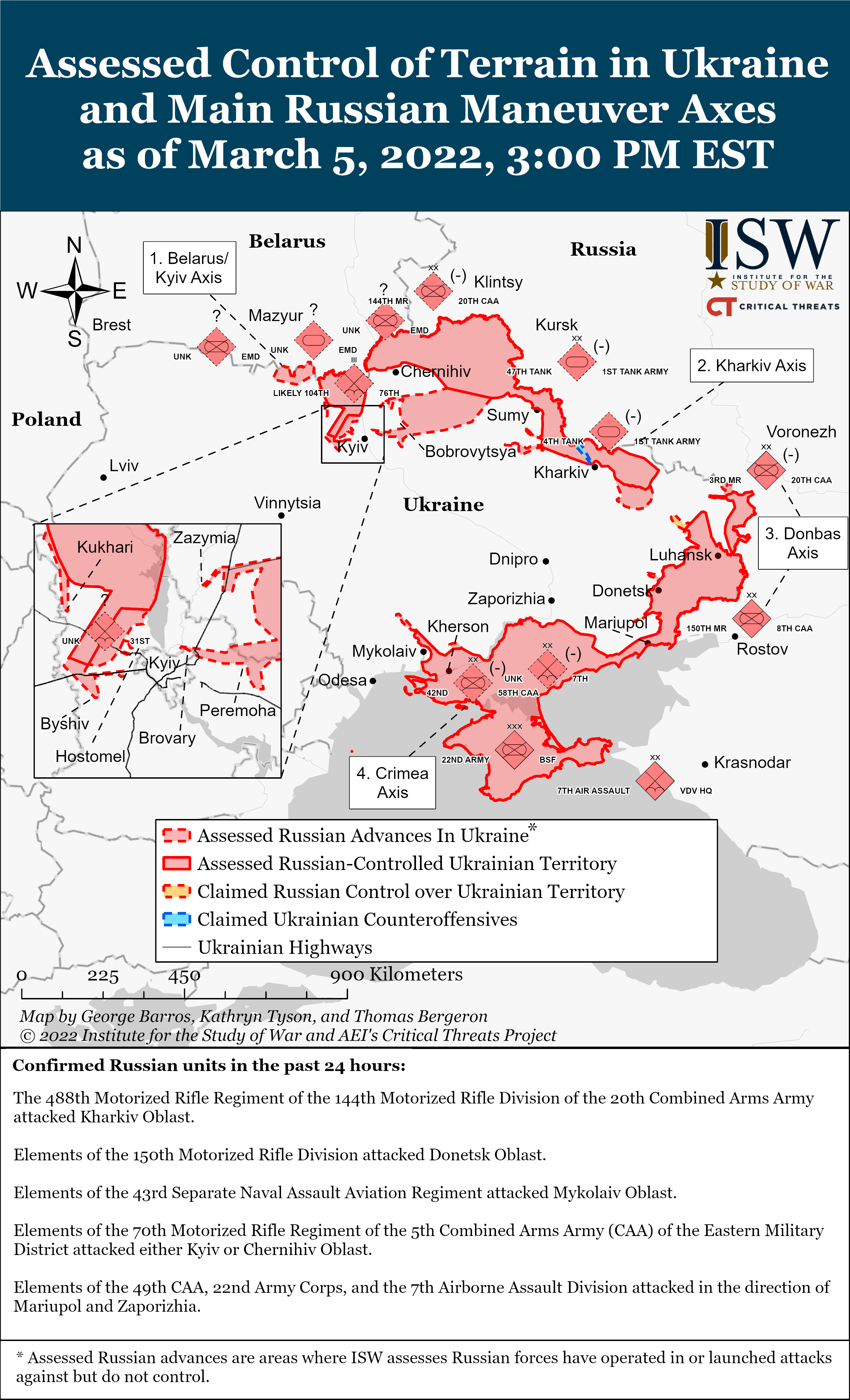 Main effort—Kyiv axis: Russian operations on the Kyiv axis consist of a main effort aimed at enveloping and ultimately encircling the city from the west and supporting efforts along the Chernihiv and Sumy axes to encircle it from the northeast and east.

Russian operations against Kyiv made little progress in the past 24 hours. ISW has tentatively concluded that Russian movements to the eastern outskirts of the city reported in our March 4 update were likely raids or forward elements that did not hold ground much beyond the towns of Nizhyn and Priluky on the Sumy axis; we have updated our control of terrain map accordingly. Russian troops made no significant advances around Kyiv in the past 24 hours.

Russian forces remain deployed in the positions north and west of Kyiv that they have occupied for several days and have not initiated major combat operations in the past 24 hours. The Ukrainian General Staff continues to assess that 15 Russian BTGs are active on this axis, that two BTGs attempted to move toward Vyshgorod, near the Dnipro north of Kyiv, and that the Russians are establishing a forward base for helicopters near Ivankiv, roughly 70 kilometers northwest of Kyiv’s center.[1] An excellent OSINT analyst commented that social media reports of Russian Ka-52 attack helicopters escorting a military convoy near Kyiv on March 5 suggest that Russian forces are adopting better practices for operating against a determined and capable enemy.[2] Hostomel, the town near Antonov airfield northwest of Kyiv, remains contested, with reports that troops of the Russian 31st Airborne Brigade had taken 40 civilian hostages in the town on March 4.[3]

Russian activity northeast of Kyiv remained very limited over the past 24 hours.[4]

Russian forces do not appear to have been active on this axis in the past 24 hours. The Ukrainian General Staff reported that the Ukrainian Air Force attacked elements of the 15th Motorized Rifle Brigade of the Central Military District near Peremoha, roughly 25 kilometers northeast of central Kyiv, on March 5.[5]

Russian forces remain focused on attacking Kharkiv using air, artillery, rocket, and missile fire rather than ground offensives while seeking to bypass the city and possibly to prepare for a future ground assault.[6] The Ukrainian General Staff reports that elements of the Russian 6th and 20th Combined Arms Armies (CAA) were preparing to conduct offensive operations toward Kharkiv on March 5.[7] The General Staff report asserts that 3,000 Russian reservists have appeared near the Russian city of Belgorod, likely to serve as individual replacements for casualties among the Russian ground forces units that have been fighting near Kharkiv.[8]

Ukrainian forces conducted a counter-offensive against Russian forces near Kharkiv that damaged Russian front-line units.[9] Ukrainian military personnel posted video of a Russian armored column they claim was destroyed in this raid on March 5 and reported capturing 30 pieces of Russian equipment during an ambush.[10] The governor of Kharkiv Oblast claimed that Ukrainian forces drove all the way to Ukraine‘s border with Russia at an unspecified location northwest of Kharkiv City.[11] He added that Ukrainian forces intended to drive north to the border near Belgorod in the coming days.[12]

Russian forces have devoted sufficient effort to opening axes of advance through and near northern Luhansk Oblast as to merit a slight modification to our assessment of the weighting of the Russian campaign. The Ukrainian General Staff reported on March 5 efforts by up to seven BTGs of the Donetsk and Luhansk proxy forces and the 150th Motorized Rifle Division to try “to continue offensive operations in the directions of the cities of Dnipro and Zaporizhia.”[13] The General Staff also reported that elements of the 20th Combined Arms Army, possibly of the 3rd Motorized Rifle Division, were trying to advance toward Severodonetsk but were stopped somewhere along the Northern Donets River.[14] The Russians may be trying to establish a link between the 20th CAA and the 8th CAA and the proxy forces it controls in northern Luhansk to set conditions for further advances toward the west.

The Russian encirclement of Mariupol continues, causing widely-reported suffering among the population in that city.[15] The Ukrainian General Staff reports that elements of the 49th Combined Arms Army, 22nd Army Corps (based in Crimea), and 7th Airborne Division are involved in operations in and around Mariupol.[16] Russian violations of the negotiated humanitarian corridor via Volnovakha may be related to reported efforts by Russian military and proxy forces to drive west toward the border of Zaporizhya Oblast (which would not, of course, excuse the Russian humanitarian violations).[17]

Russian troops continue consolidating control of Kherson city while likely preparing to renew their advances toward Mykolayiv and ultimately Odesa. The Ukrainian General Staff reports that as many as 17 BTGs drawn from the 8th Combined Arms Army and 22nd Army Corps were preparing to resume the offensive on March 5.[18] ISW has observed no indications of renewed major military operations on that axis in the past 24 hours (which is consistent with the Ukrainian General Staff report).

Russian forces in Kherson did not apparently attack or interfere with a large protest against their presence on March 5.[19] Media reports indicate that Russian troops are raping local women, however, and additional personnel from either Russia’s FSB or Russian National Guard (Rosgvardia) reportedly arrived in Kherson on March 4.[20] It is possible that Russian conventional forces prefer not to engage directly with civilian protesters but that the Russian services often used to suppress dissent violently within Russia will deal much more harshly with the local population. Reported rapes, which would be war crimes, may indicate poor discipline among Russian soldiers.

The Ukrainian General Staff reported that elements of Russia’s 810th Naval Infantry Brigade were loading onto large amphibious ships on the west coast of the Crimean Peninsula on March 5.[21] These forces may be additions to the naval infantry already aboard Russian amphibious ships as of March 4.[22] Russian amphibious operations are most likely aimed at Odesa or its immediate vicinity since Russian troops already control nearly the whole of the Sea of Azov littoral.