Russian operations to continue the encirclement of and assault on Kyiv have likely begun, although on a smaller scale and in a more ad hoc manner than ISW expected. The equivalent of a Russian reinforced brigade reportedly tried to advance toward Kyiv through its western outskirts and made little progress. Smaller operations continued slowly to consolidate and gradually to extend the encirclement to the southwest of the capital. Russian operations in the eastern approaches to Kyiv remain in a lull, likely because the Russians are focusing on securing the long lines of communication running to those outskirts from Russian bases around Sumy and Chernihiv in the face of skillful and determined Ukrainian harassment of those lines. The battle for Kyiv is likely to continue to be a drawn-out affair unless the Russians can launch a more concentrated and coherent attack than they have yet shown the ability to conduct.

The Russian military is clearly struggling to mobilize reserve manpower to offset losses and fill out new units. The Kremlin admitted that conscripts have been fighting in Ukraine (in violation of Russian law) for the first time on March 9, although in a customarily bizarre fashion: according to the Kremlin, Vladimir Putin himself discovered that conscripts were operating in Ukraine while he was reviewing a report on the conflict. The Kremlin says Russian military judicial authorities will reportedly open an investigation into this practice and punish those responsible.[1] Putin himself would, of course, ultimately be responsible for having issued the mobilization orders that sent conscripts to the front. Reports have also surfaced that students at medical and theater schools were being conscripted in late February, along with some denials of those reports.[2] Social media users also flagged the movement of Russian peacekeeping forces in the Nagorno-Karabakh region, speculating that they may be withdrawing to participate in the war in Ukraine.[3] ISW cannot independently verify any of these reports. Their general tenor, however, aligns with our published assessment that Russia faces challenges in generating a new wave of combat-effective reservists or recruits in a short period of time and our assessment that Russia will need such a wave to complete its objectives.[4] 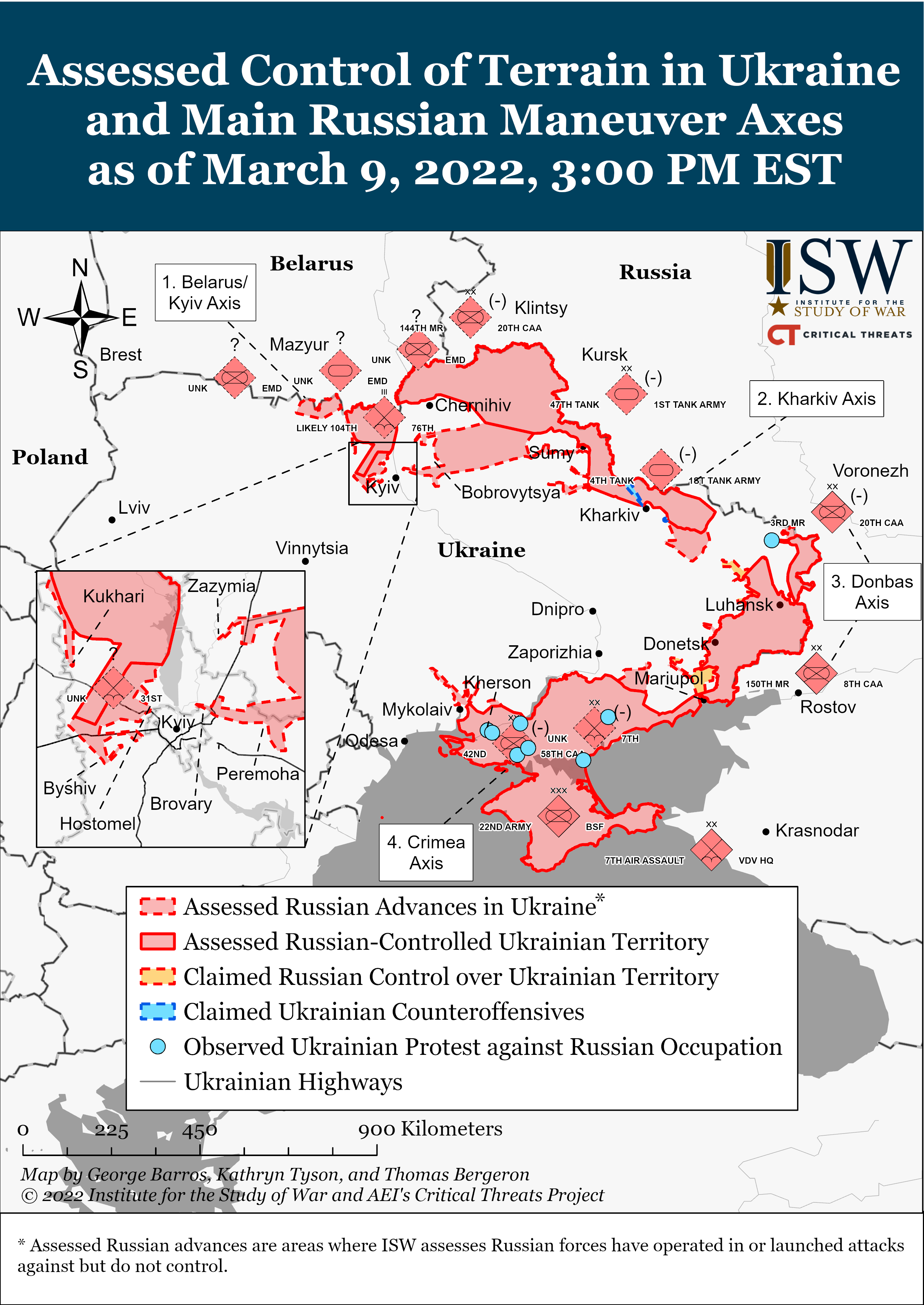 Main effort—Kyiv axis: Russian operations on the Kyiv axis are aimed at encircling the city from the northwest, west, east.

Russian forces have likely begun renewed offensive operations that ISW has been forecasting, but at a lower level of intensity and a smaller scale than we had anticipated. Individual Russian attacks at roughly regiment size reported on March 8 and March 9 may represent the scale of offensive operations Russian forces can likely conduct on this axis at any one time. The possibility of a larger and more coherent general attack either to encircle Kyiv or to assault it in the coming days remains possible, but the continued commitment of groups of two to five battalion tactical groups (BTGs) at a time makes such a large-scale general attack less likely.

The Ukrainian General Staff also reported on March 8 that a total of four BTGs (two each from the 5th Separate Tank Brigade and the 37th Separate Motorized Rifle Brigade) advanced to Yasnohorodka, roughly 37 kilometers southwest of the center of Kyiv.[7] Yasnohorodka is between two areas to which ISW had already assessed Russian forces had advanced, although it is along a spoke road leading from Byshiv, which the Russians have likely already occupied, to Kyiv. This attack is likely part of an effort to consolidate Russian control of the southwestern approaches to Kyiv and set conditions for the concentration of Russian forces closer to the city from this direction.

The Ukrainian General Staff also noted that Russian forces appear to be readying to renew offensive operations toward Fastiv, a key road junction southwest of Kyiv and roughly 22 kilometers south of the forward-most Russian advance on this axis at Byshiv.[8] ISW has observed no indications that the Russians have initiated new operations toward Fastiv in the past 24 hours.

ISW has received no reports of renewed Russian offensive operations in the area of Ivankiv, and the Ukrainian General Staff explicitly reported on March 8 that the Russians had not conducted operations near Dymer.[9]

Russian forces have continued efforts to take Chernihiv town as well as to bypass it to the southeast and east. The Ukrainian General Staff reported on March 9 that elements of the 2nd Combined Arms Army, 41st Combined Arms Army, and 90th Tank Division are attempting to renew the offensive toward Chernihiv and Kyiv from the north, likely committing an additional reserve BTG of the 55th Motorized Rifle Brigade of the 41st CAA to this effort.[10] Ukrainian forces reported on March 9 that they continue to hold Chernihiv.[11]

Russian forces have continued efforts to consolidate control of their lines of communication to eastern Kyiv along the Sumy axis in the past 24 hours, as Ukrainian forces continue to contest them. Russian forces from the Chernihiv concentration may be operating on the east bank of the Desna south of Chernihiv in support of this effort. The Ukrainian General Staff reported on March 8 that Russian troops were moving pontoon bridging equipment in the vicinity of Kozelets, roughly 65 kilometers northeast of Kyiv.[12] The area around Kozelets is very wet, with several small rivers that likely necessitate the pontoon bridges, although it is possible that the Russians intend to use them to cross the Desna itself.

The Ukrainian General Staff reported fighting all along the Russian line of communication from near Sumy to Nizhyn and even further north toward Hlukhiv, which is nearly at the Russian border.[13] This continued fighting likely indicates that the Russians are struggling to consolidate control over this lengthy line of communication and that Ukrainian forces are actively contesting it. That phenomenon may partially explain the relative paucity of Russian activity reported in Kyiv’s eastern outskirts in the past 24 hours.

Russian forces continued to bombard Kharkiv but have not renewed attempts to take the city through ground assault on a large scale.[14] The Russians have likely diverted considerable combat power from Kharkiv to focus on capturing Sumy. The Ukrainian General Staff reported on March 9 that the Russians were concentrating aircraft to support possible airborne operations as part of larger preparations to attack Sumy.[15] Social media reports confirm that there has been considerable combat around Sumy.[16]

Russian forces, likely from the Kharkiv axis, also continued operations to the southeast. The Ukrainian General Staff reports that the Russians have continued efforts to seize Izyum, roughly 110 kilometers southeast of Kharkiv, and to cross the Northern Donets and Bereka Rivers.[17] Social media reports from March 9 confirmed Russian shelling at Balakliia, about halfway between Kharkiv and Izyum.[18]

The Luhansk People’s Republic (LNR) claimed on March 8 that it now controls most of Luhansk Oblast.[19] The Russian Ministry of Defense claimed more modest gains for the LNR on March 9.[20] ISW has no independent confirmation of these claims.

Russian forces continue to encircle and bombard Mariupol, resulting in the widely-reported destruction of a maternity hospital in the city. The military situation around Mariupol has not materially changed in the past 24 hours.

The Ukrainian General Staff assessed as of March 9 that as many as 17 Russian BTGs belonging to the 49th Combined Arms Army, 22nd Army Corps, 20th Motorized Rifle Division of the 8th Combined Arms Army, and airborne troops are assembled north of Crimea from Kherson to Rozivka, roughly 47 kilometers northwest of Mariupol.[21] The General Staff had previously suggested that this grouping of forces was preparing for an offensive in the direction of Zaporizhya, but it seems likely that only a portion of these Russian troops will participate in that advance.[22] Russian forces around Kherson appear concentrated on the drive toward Mykolayiv and ultimately west toward Odesa, although they could attempt to drive northeast toward Zaporizhya instead of Odesa. Initial limited Russian advances along the road from Mykolayiv toward Novyi Buh were small in scale and not very successful.[23]

Social media reports show considerable Russian force, possibly arriving reinforcements, in and around Kherson on March 9.[24] A Ukrainian General Staff report from March 9 that Russian servicemen dressed in civilian clothes are moving from Kherson toward Mykolayiv may indicate that those reinforcements are intended to take or bypass Mykolayiv.[25] Social media reports also show Russian forces bypassing Mykolayiv, possibly to encircle it at least on the east bank of the Dnipro.[26]

The Ukrainian General Staff continued on March 9 to warn that Russia might attempt to activate its forces illegally present in the Moldovan territory of Transnistria, although it noted that the morale and combat capability of those forces is likely very low.[27]