The Belarusian Ministry of Defense escalated its false claims of US and NATO preparations to attack Belarus while announcing the start of a second stage of ongoing military exercises on May 10. However, Belarus remains unlikely to join the war in Ukraine. Belarusian Defense Minister Viktor Khrenin announced the second stage of ongoing rapid response forces exercises on May 10 in response to what he falsely claimed were NATO escalations.[3] Belarusian First Deputy Minister of Defense Victor Gulevich accused the US and its allies of building up a military presence around Belarusian borders and claimed that Poland and the Baltic states are threatening Belarusian territory through reconnaissance, sabotage, and special operations.[4] Gulevich announced that Belarusian battalion tactical groups (BTGs) will subsequently advance to the Western and Northwestern operational zones as part of a ”whole range of measures aimed at countering possible threats” in these areas.[5] Gulevich additionally stated that the presence of 20,000 Ukrainian troops in Belarus’ Southern Operational District have necessitated a deployment of unspecified Belarusian troops to three tactical directions near the Ukrainian border, which is consistent with Ukrainian General Staff reporting that certain Belarusian units have deployed to the Ukraine-Belarus border area for a combat readiness check.[6]

The rhetoric of threats to Belarus’ borders is not new and was frequently employed by Belarusian President Alexander Lukashenko in the early stages of the Russian invasion of Ukraine.[7] The Belarusian exercises, which are concentrated on Belarus’ borders with Poland and the Baltic States rather than Ukraine, are likely primarily demonstrative and signal Belarus’ continued political support for Russia‘s war in Ukraine. The exercises are likely additionally intended to draw NATO attention and possibly disrupt NATO aid to Ukraine, rather than threatening an actual military operation—similar to Russian efforts to destabilize Moldova that are likely intended to distract Romania and NATO rather than directly threaten Odesa.  Belarus remains unlikely to join the war in Ukraine. Lukashenko successfully repressed domestic opposition in 2020 and 2021 but remains vulnerable to further domestic unrest if his security apparatus weakens; he is likely unwilling to risk losing his military in a stalled and deteriorating Russian war in Ukraine. 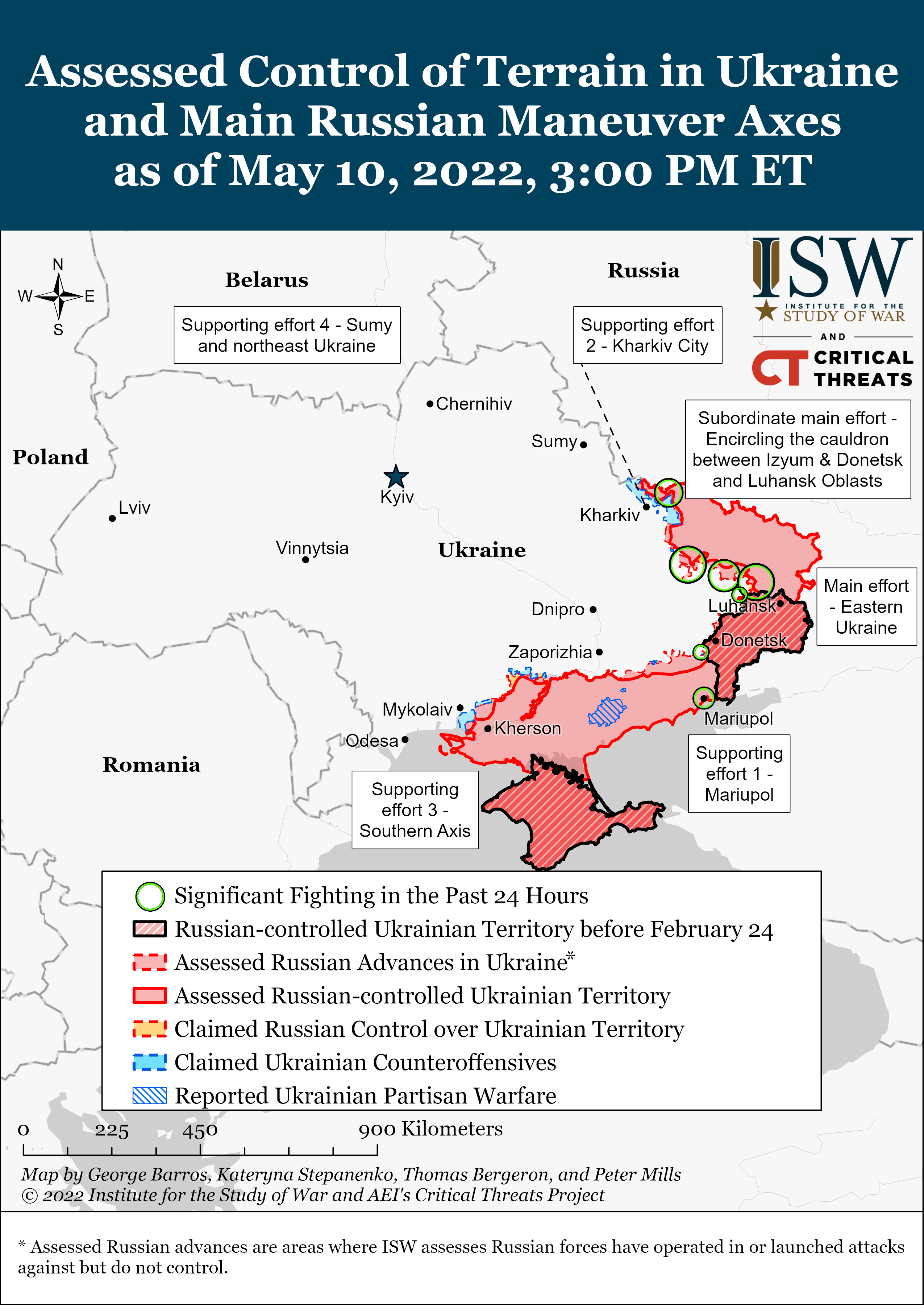 Russian forces did not make any confirmed advances in any direction from Izyum on May 10. The Ukrainian General Staff stated that Russian forces around Izyum are focusing on regrouping, replenishing equipment, and conducting reconnaissance to create conditions for renewed offensives east towards Lyman and Slovyansk.[8]

Russian forces continued ground attacks and shelling along the line of contact in Donetsk and Luhansk Oblasts and made marginal westward advances on May 10. The Russian Ministry of Defense claimed that Russian forces moved west from Popasna and reached the administrative border of Luhansk and Donetsk Oblasts, though ISW cannot independently confirm this claim.[9] Ukrainian sources reported intense fighting to the north, west, and south of Severodonetsk in Vojevodivka, Toshkivke, Rubizhne, Lysychansk, Orikhove, Hirske, and Bilohorivka as Russian forces attempt to encircle the town.[10] Ukrainian forces notably destroyed a Russian pontoon bridge across the Siverskyi Donets River in the vicinity of Bilohorivka, which may allow Ukrainian forces to develop a line west of Severodonetsk and disrupt the intended Russian encirclement of the Rubizhne-Severodonetsk-Lysychansk area.[11]

Russian troops continued attacks in Donetsk Oblast around Oleksandrivka and Shandryholove in order to move west to the Donetsk-Kharkiv administrative border.[12] Russian forces additionally continued unsuccessful frontal assaults around Donetsk City but did not make any confirmed advances on May 10.[13] Pro-Russian reporter Aleksandr Sladkov, who is operating around Donetsk City, complained that Russian forces are fighting Ukrainians at a 1:1 assault force ratio and have not been able to push Ukrainian forces from their positions in Donetsk.[14] 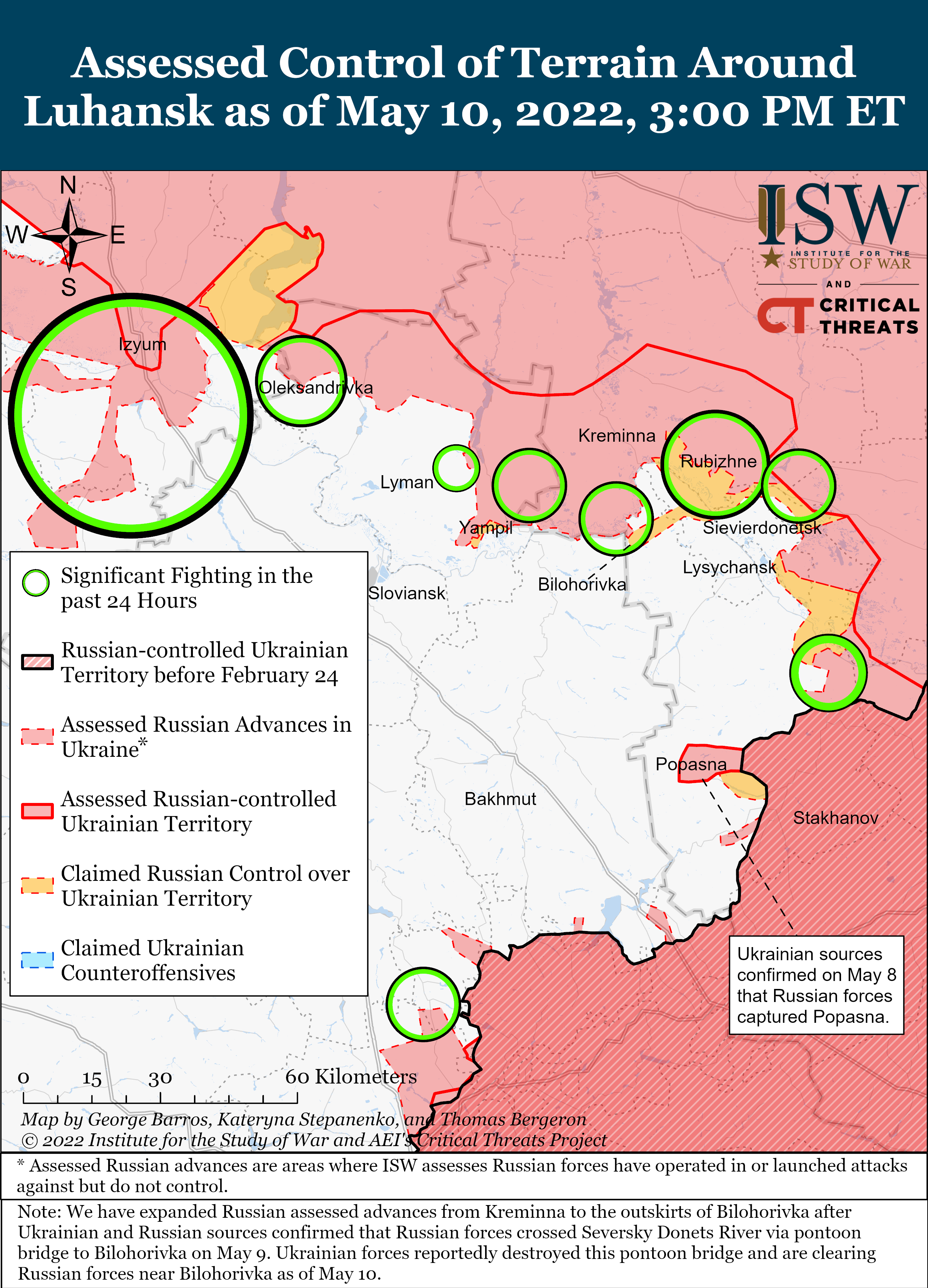 Russian forces continued to conduct air and artillery strikes and ground assaults against Ukrainian positions in the Azovstal Steel Plant on May 10.[15] Deputy Ukrainian Prime Minister Iryna Vershchuk reported that there are 1,000 Ukrainian soldiers in the plant and that hundreds are wounded.[16] A senior US defense official noted that Russian forces are increasingly relying on “dumb bombs” to assault Mariupol because they have expended precision-guided munition supplies.[17] Russian authorities are continuing to prepare Mariupol for economic integration. Advisor to the Mayor of Mariupol Petro Andryushchenko claimed that occupation authorities of the Donetsk People’s Republic (DNR) are trying to call workers back to the captured Ilyich Iron and Steel Work Plant to launch production of military equipment to supply Russian and proxy forces.[18] 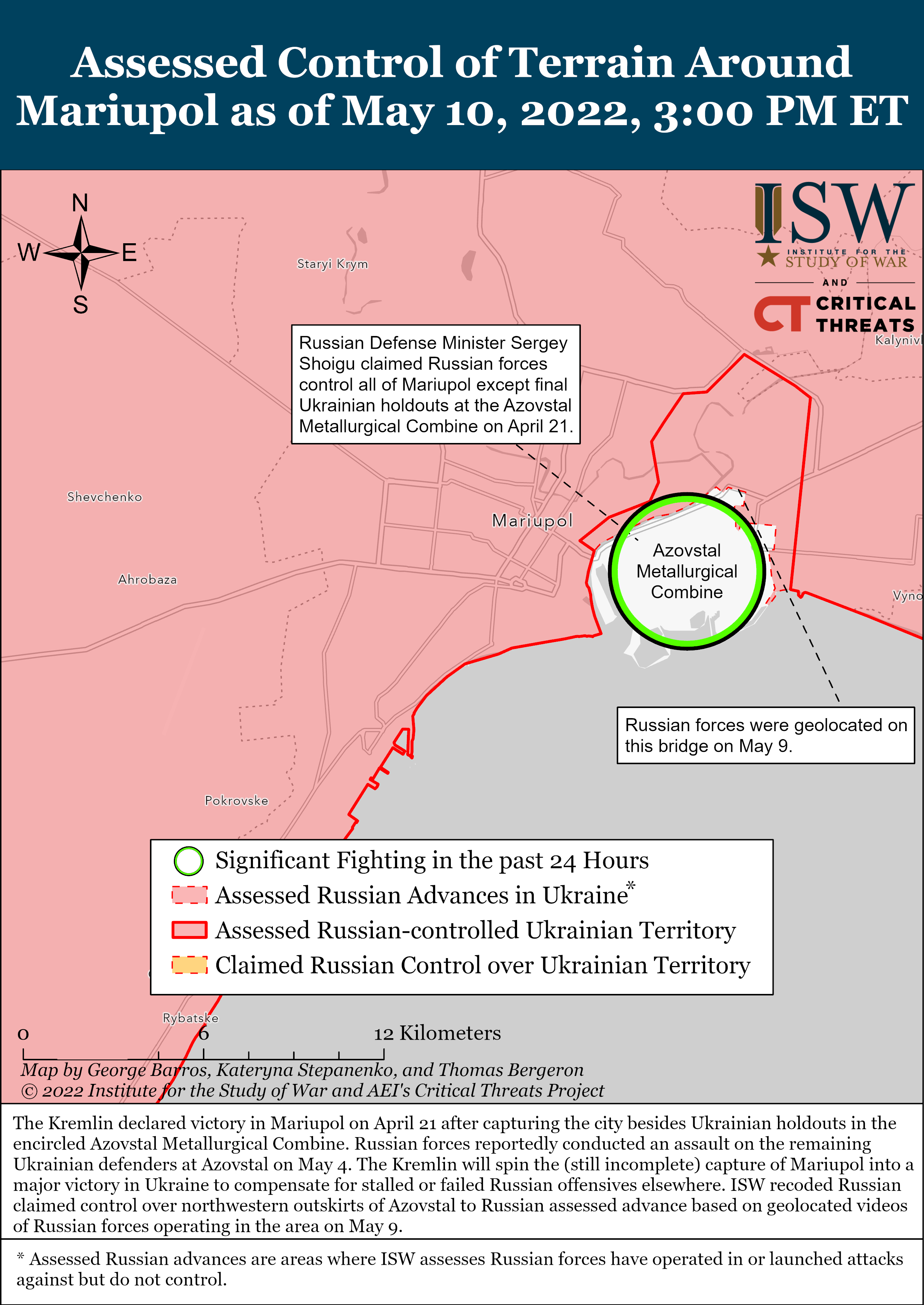 Ukrainian forces reportedly pushed Russian troops further north from Kharkiv City toward the international border on May 10. The Ukrainian General Staff confirmed on May 10 that Ukrainian forces recaptured Cherkasy Tyshky and Ruski Tyshky, both within 10 kilometers of the northeast boundary of Kharkiv City, after unverified reports on May 7 and 9 that Russian forces withdrew from the two towns.[19] Ukrainian units reportedly also took control of Pytomnyk, 10 kilometers directly north of Kharkiv City.[20] The Ukrainian 227th Kharkiv Territorial Defense Battalion claimed that they successfully advanced north of Staryi Saltiv (about 40 kilometers east of Kharkiv City) and liberated Bairak, Zamulivka, Verkhnii Saltiv, and Rubizhne (a different Rubizhne than the town of the same name in Kharkiv Oblast) on May 10.[21] A Russian source claimed that Ukrainian troops are as far north as Vovchansk, which is less than 10 kilometers south of the Russian border.[22] ISW cannot independently confirm this claim, but it is consistent with the overall Ukrainian push toward the Russian border over the last few days.

The Borivka Village Council reported that Russian forces are withdrawing en masse from Borova and Bohuslavka, southeast Kharkiv Oblast, and moving north in the direction of Kupyansk.[23] Russian forces are likely prioritizing reinforcing their grouping northeast of Kharkiv to prevent further Ukrainian counteroffensives in the direction of the international border at the expense of offensive operations to the southeast.[24] The Ukrainian General Staff reported that elements of the 138th Separate Mechanized Brigade of the 6th Combined Arms Army withdrew to Belgorod due to losses sustained in Kharkiv Oblast.[25] 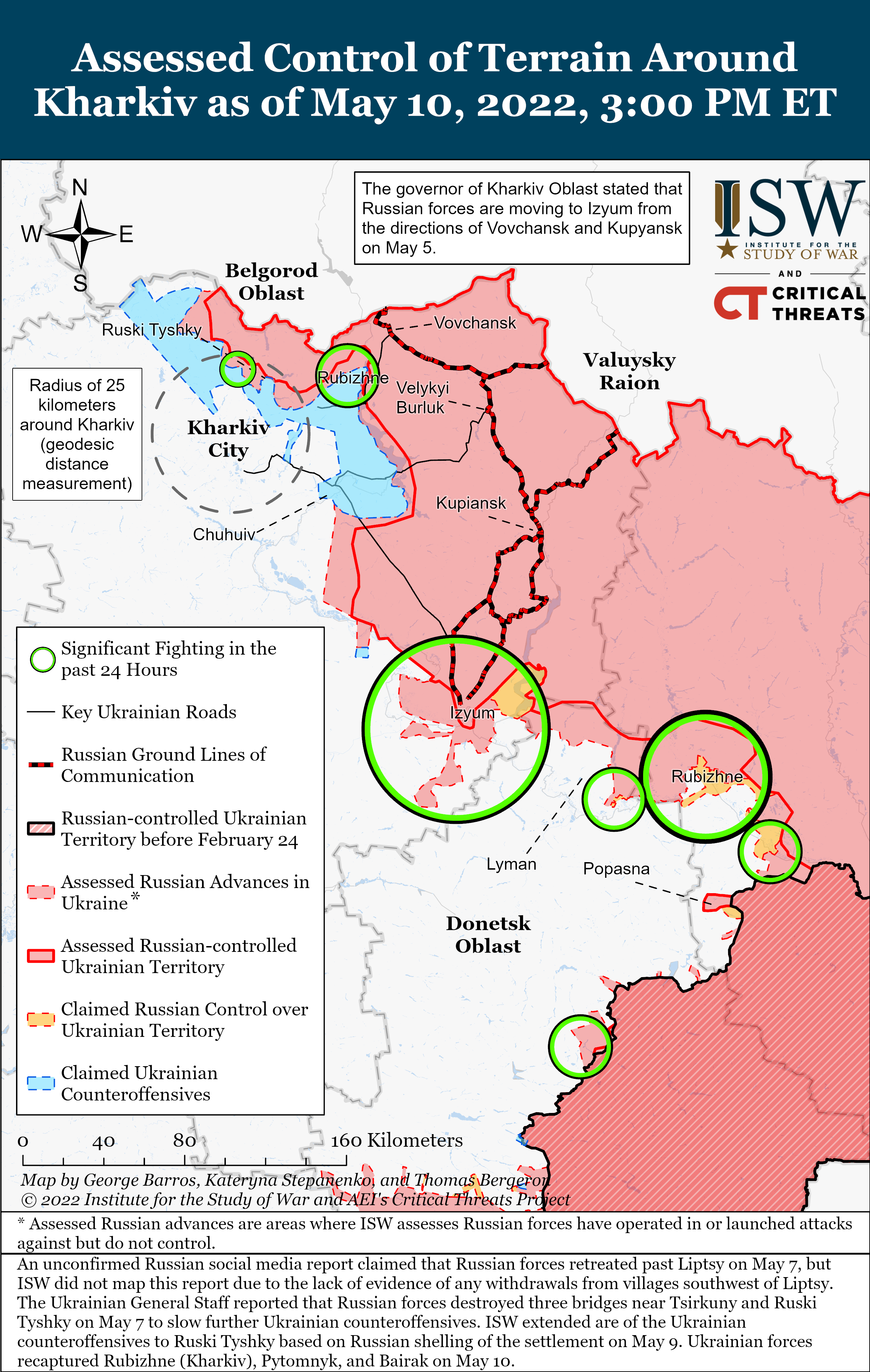 Russian and Ukrainian troops clashed on the line of contact between Kherson and Mykolaiv Oblasts but neither side made any confirmed advances on May 10.[26] Russian forces continued to shell Zaporizhia, Dnipropetrovsk, and Mykolaiv oblasts.[27]  Russian forces additionally intensified airstrikes against Odesa.[28] Transnistrian authorities announced that they will extend the “red level” terrorist threat until May 25.[29] 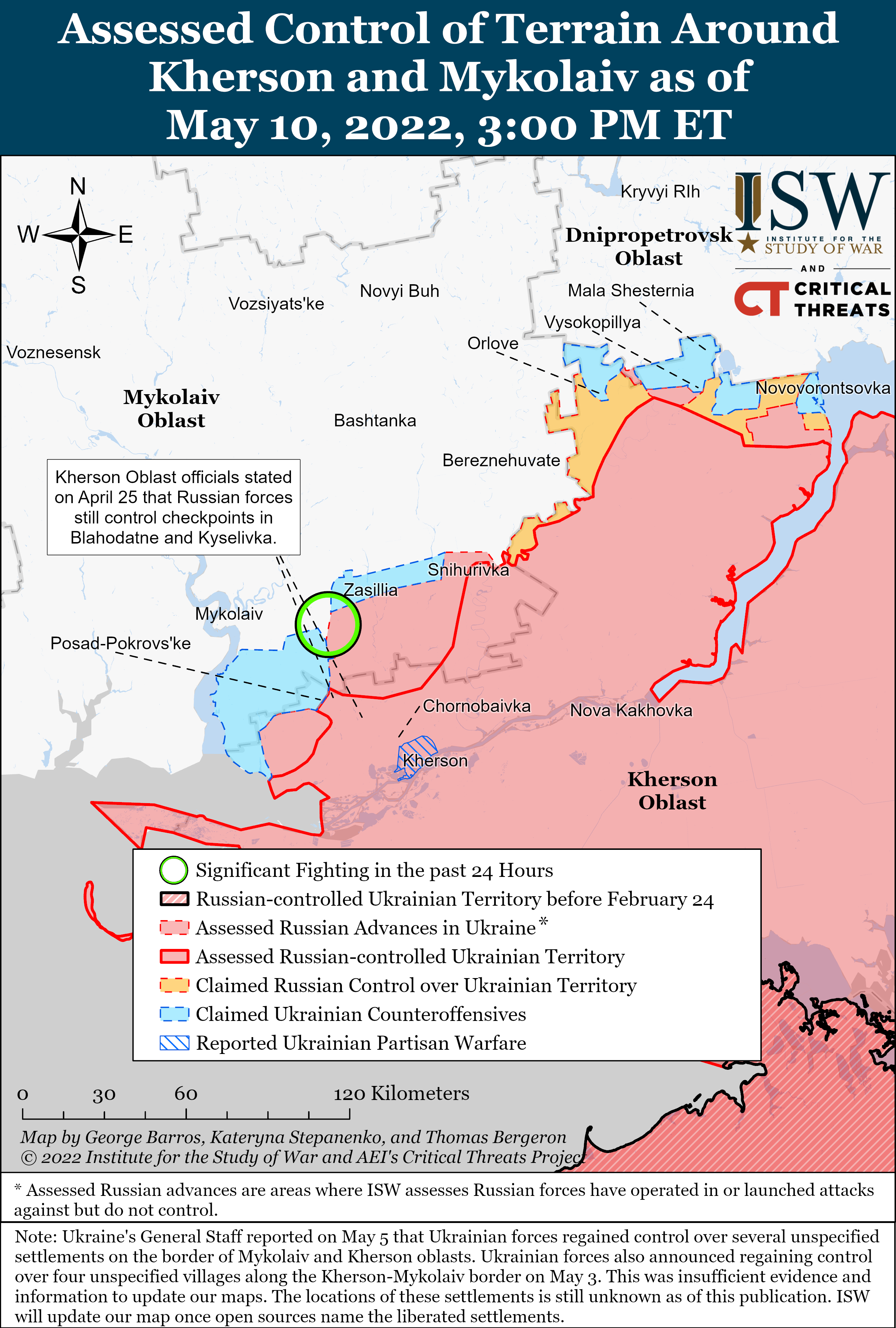 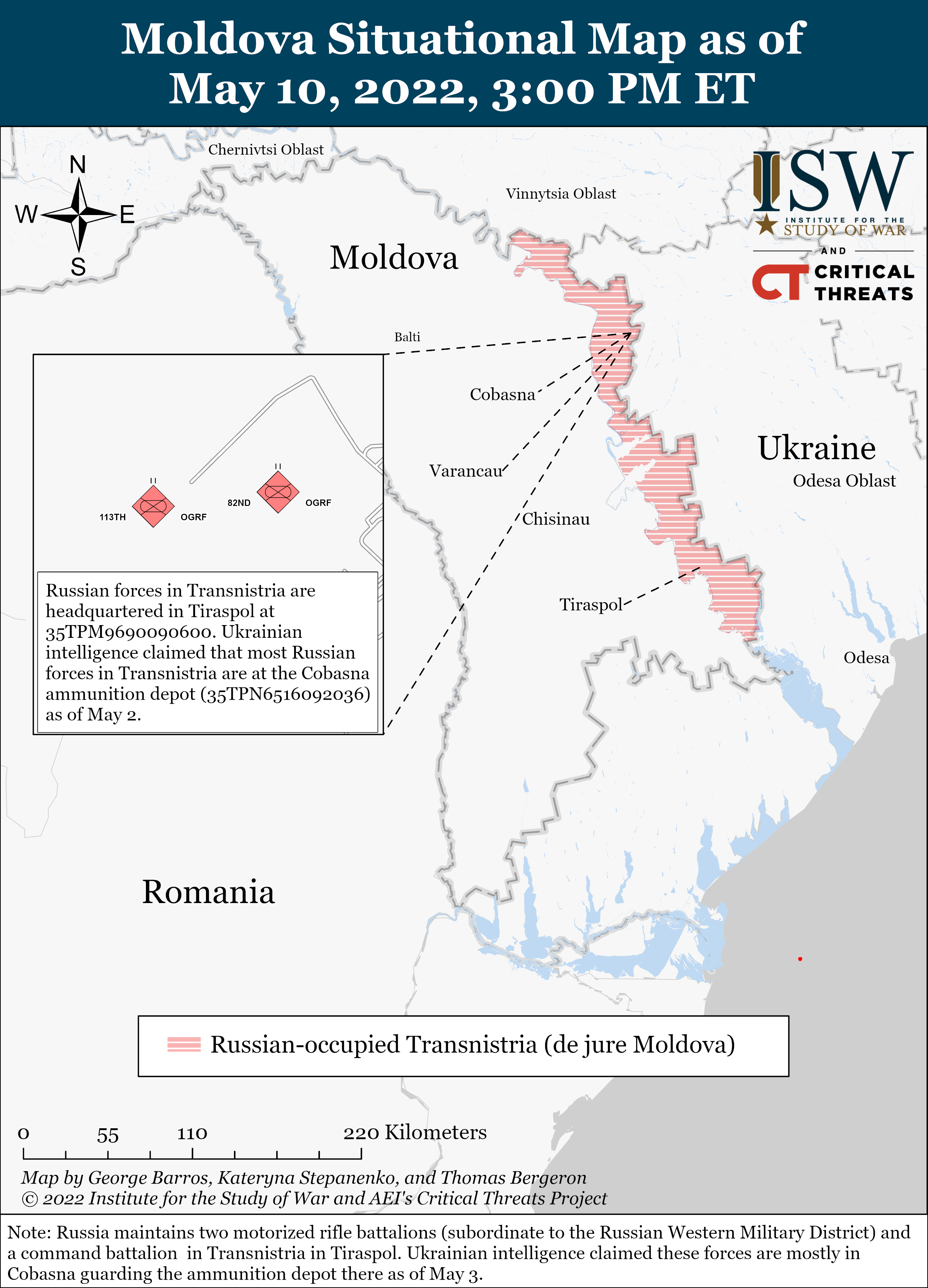