Russian forces conducted limited and largely unsuccessful ground offensives along the front line in Ukraine on May 16. The Russian grouping around Kharkiv City is notably trying to hold the border and prevent Ukrainian troops from advancing further north. This activity is different from previous Russian withdrawals from around Kyiv, Chernihiv, and Sumy earlier in the war when the Russians pulled completely back to Russian territory. Russian troops may seek to retain positions in Ukraine and continue artillery strikes on Ukrainian positions in order to prevent Ukrainian forces from getting into tube or rocket-artillery range of the outskirts of Belgorod, a major city in Russia and a key hub of the Russian military effort. The Russians might alternatively hope to conduct a counter-counter-offensive to push back south toward Kharkiv, although such an effort is highly unlikely to succeed.

Russian military bloggers continued to post analysis that is skeptical of Russian efforts and increasingly in-line with Western assessments of Russian military failures in Ukraine. One such blogger, Igor Strelkov, claimed that the Russian offensive to take Donbas has ultimately failed and that “not a single large settlement “has been liberated.[1] Strelkov even noted that the capture of Rubizhne is relatively insignificant because it happened before the new offensive in Donbas had begun. Strelkov stated that Russian forces are unlikely to liberate Donbas by the summer and that Ukrainian troops will hold their positions around Donetsk City. Strelkov notably claimed that Russian failures thus far have not surprised him because the intent of Russian command has been so evident throughout the operation that Ukrainian troops are aware of exactly how to best respond and warns that Russian troops are fighting to the point of exhaustion under “rules proposed by the enemy.” The continued disenchantment of pro-Russian milbloggers with the Russian war effort may fuel dissatisfaction in Russia itself, especially if Moscow continues to press recruitment and conscription efforts that send poorly-trained cannon-fodder to the front lines.

Over 260 Mariupol defenders evacuated from the Azovstal Steel Plant to Russian occupied settlements in Donetsk Oblast on May 16.[2] Ukrainian and Russian authorities negotiated evacuation for wounded Ukrainian servicemen via humanitarian corridors. Ukrainian officials previously called for the evacuation of 60 medics and critically wounded servicemen on May 13.[3] The Kremlin may extend humanitarian corridors for remaining Ukrainian defenders in an effort to fully control Mariupol.

Frictions between Russian occupation administrations and pro-Russian collaborators is growing in occupied areas of Ukraine. The Zaporizhia Oblast Military Administration reported that Russian forces are having serious conflicts with collaborators due to interpersonal power conflicts.[4] A well-known collaborator in Zaporizhia accused the Russian-installed governor of the area of stealing his 10,000 ruble compensation. Advisor to the Mayor of Mariupol Petro Andryshchenko additionally claimed that relatives of those mobilized into the forces of the Donetsk People’s Republic (DNR) are holding a mass protest against mobilization in Donetsk City. While ISW cannot independently verify these claims, such discontent amongst occupation elements suggests a general lack of planning by Russian authorities in occupied areas, now compounded by increasingly evident Russian losses. 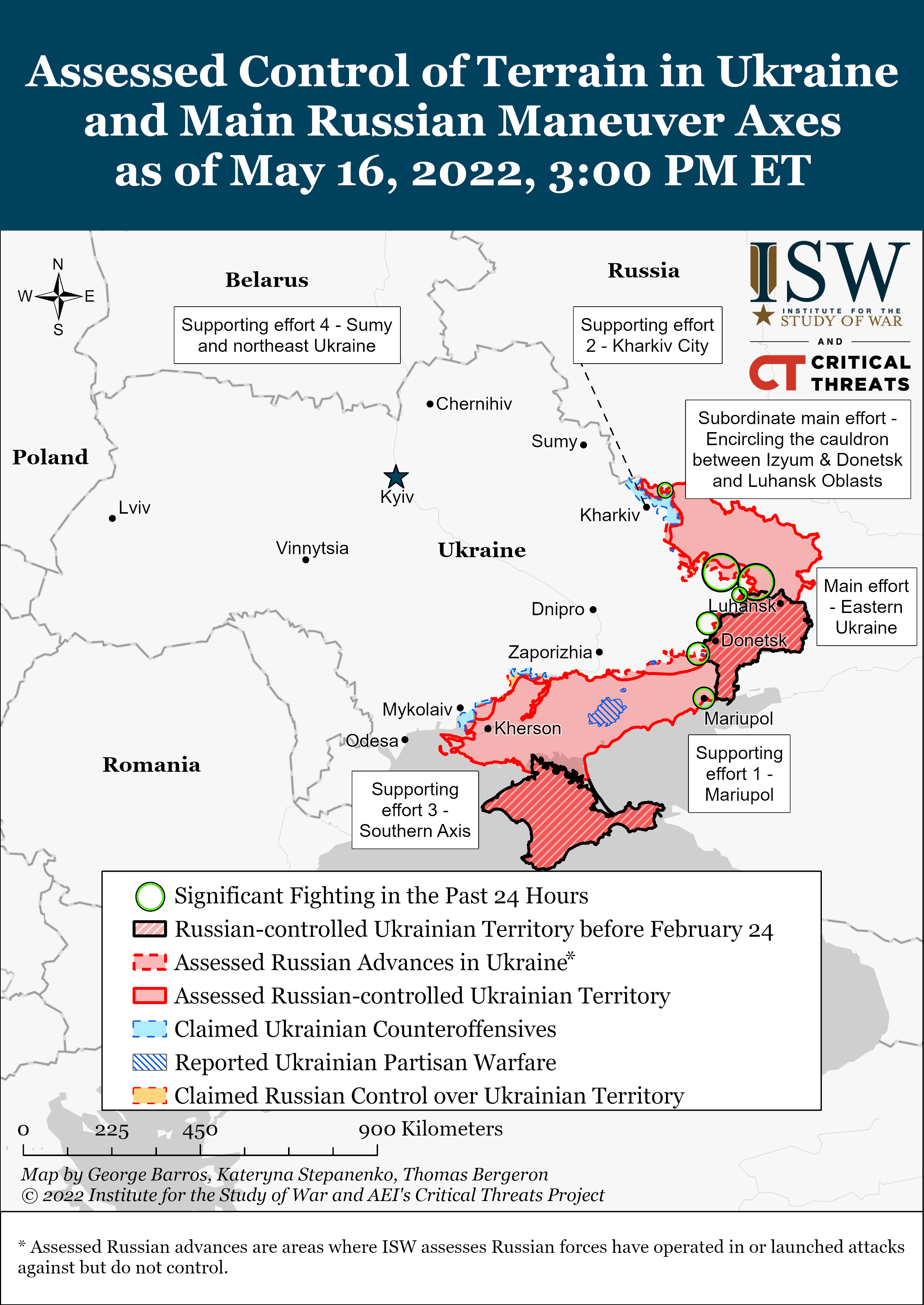 ISW has updated its assessment of the four primary efforts Russian forces are engaged in at this time. We have stopped coverage of supporting effort 4, “Sumy and northeastern Ukraine,” because it is no longer an active effort.

Russian forces did not make any confirmed advances in any direction from Izyum and focused on regrouping in preparation of renewed offensives on May 16.[5] Pro-Russian Telegram channels previously claimed that Russian troops entered Dovhenke, about 25 kilometers south of Izyum, on May 14.[6] Another pro-Russian Telegram channel claimed that fighting is on-going in the settlement on May 16, but that the offensive was a “bloody meat grinder,” indicating that Ukrainian fortifications in Dovhenke were effective and caused significant Russian losses.[7] The Ukrainian General Staff stated that elements of the Russian 20th Combined Arms Army are reconstituting after suffering losses around Izyum and likely preparing for renewed offensives towards Slovyansk.[8] Ukrainian forces are continuing to mount attacks against Russian positions in the Izyum area, and the Ukrainian General Staff claimed that Ukrainian troops destroyed a Russian ammunition depot in Izyum on May 16.[9] Such targeted Ukrainian attacks are likely putting continued pressure on Russian logistical capabilities around Izyum and contributing to the disruption of any planned Russian offensives in this area.

Russian forces continued offensive operations through Donetsk and Luhansk Oblasts and made limited gains on May 16. The Head of the Luhansk Regional State Administration Serhiy Haidai stated that Russian forces in the area are focusing on securing territory from the direction of Bilohorivka, continuing attempts to seize Severodonetsk, and taking control of the highway to Lysychansk.[10] The Ukrainian General Staff noted that Russian forces did not conduct active ground operations in Severodonetsk and instead heavily shelled Ukrainian positions in the Rubizhne-Severodonetsk-Lysychansk area.[11] This is consistent with our previous assessment that Russian troops are likely increasingly unable to commit to a full-scale encirclement of the area east of the Izyum-Slovyansk-Debaltseve highway and are opting for a shallower encirclement with artillery support. Ukrainian forces in the area are reportedly destroying Russian communications routes and railway bridges between Rubizhne and  Severodonetsk to disrupt further Russian offensives on Severodonetsk and Lysychansk.[12] Russian forces additionally continued offensive operations south of Severodonetsk around Toshkiva, Pylpchatyne, and Hirske, which is a likely push towards Bakhmut in order either to secure northwestward highway access to the Slovyansk-Kramatorsk area or to cut the last highway connecting Severodonetsk with the rest of Ukraine at Bakhmut.[13]

Russian troops reportedly conducted ground assaults towards Lyman, Bakhmut, Kurakhove, Shandrygolove, and around Donetsk City on May 16.[14] These assaults, however, continued to be largely ineffective and pro-Russian military analysis Telegram channels reporting on such stymied advances are increasingly critical of heavy Russian losses. One such channel claimed that the Russian operation to defeat the Ukrainian grouping in Donetsk Oblast by late April has failed and that marginal tactical success has come at the cost of heavy losses and fierce fighting.[15] Discontent over unsuccessful Russian operations within Donetsk Oblast appears to be growing, and Advisor to the Mayor of Mariupol Petro Andryushchenko claimed that family members of those mobilized in the troops of the Donetsk People’s Republic (DNR) militia held a massive protest against mobilization in Donetsk City on May 15.[16] While ISW cannot independently confirm Andryushchenko’s claim, it is consistent with growing discontent amongst previously pro-Russian military factions as losses during the war become more widely known. 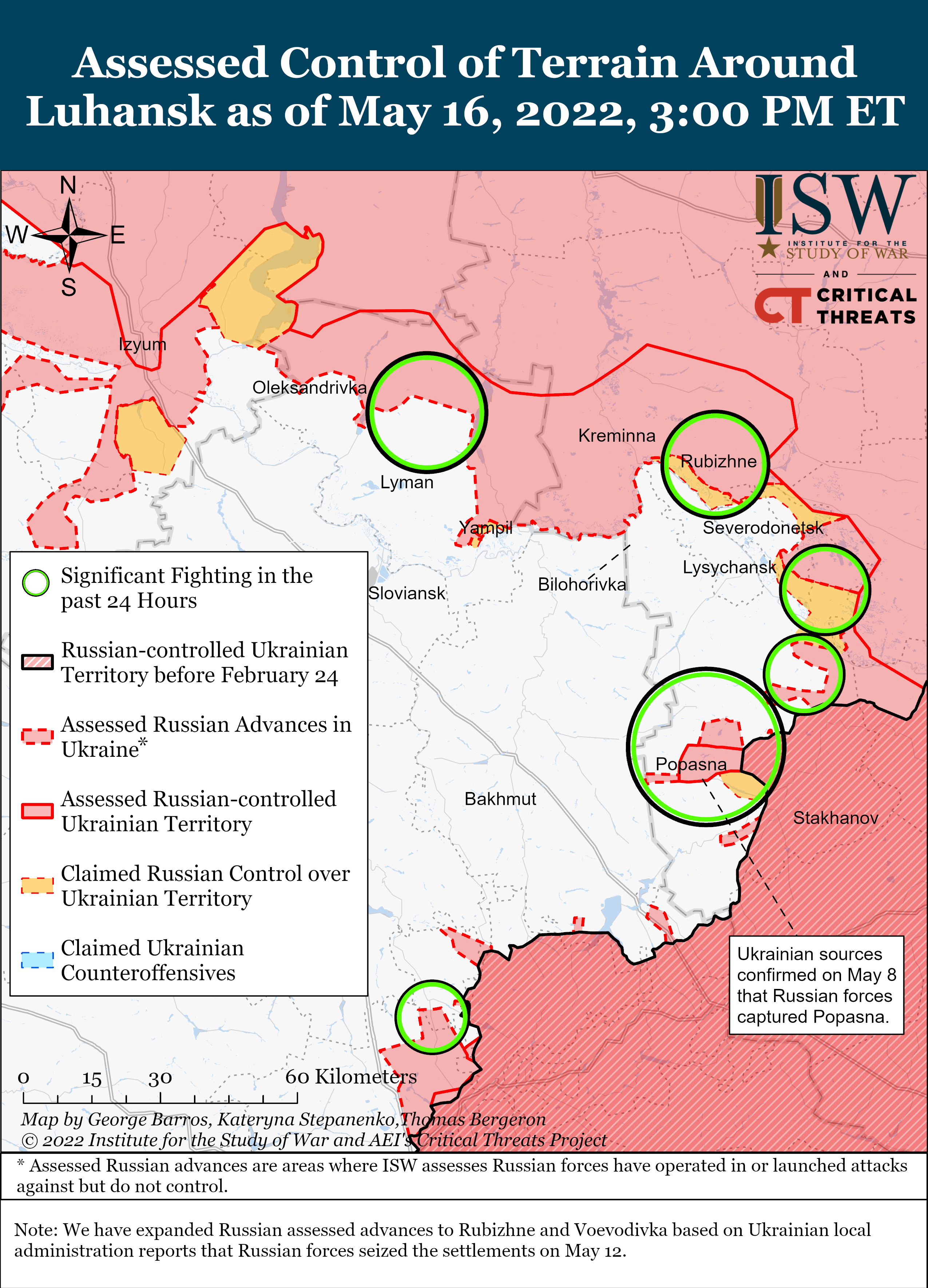 Russian and Ukrainian officials negotiated the evacuation of 264 wounded Mariupol defenders from Azovstal Steel Plant to occupied Donetsk Oblast on May 16.[17] Ukrainian Deputy Defense Minister Hanna Malyar reported that Russian forces evacuated 53 seriously wounded servicemen to Novoazovsk approximately 60 kilometers and 211 to occupied Olenivka south of Donetsk City.[18] Russian Defense Ministry claimed to have opened a humanitarian corridor for wounded Ukrainian defenders to receive treatment in occupied Donetsk Oblast on May 16.[19] Ukraine’s Azov Regiment Commander Denys Prokopenko published an ambiguous video stating that Ukrainian defenders at the Azovstal completed their order to prevent Russian soldiers from redeploying to other axes for 82 days.[20] It is possible that Ukrainian and Russian officials will negotiate to evacuate the remaining Mariupol defenders in the coming days. 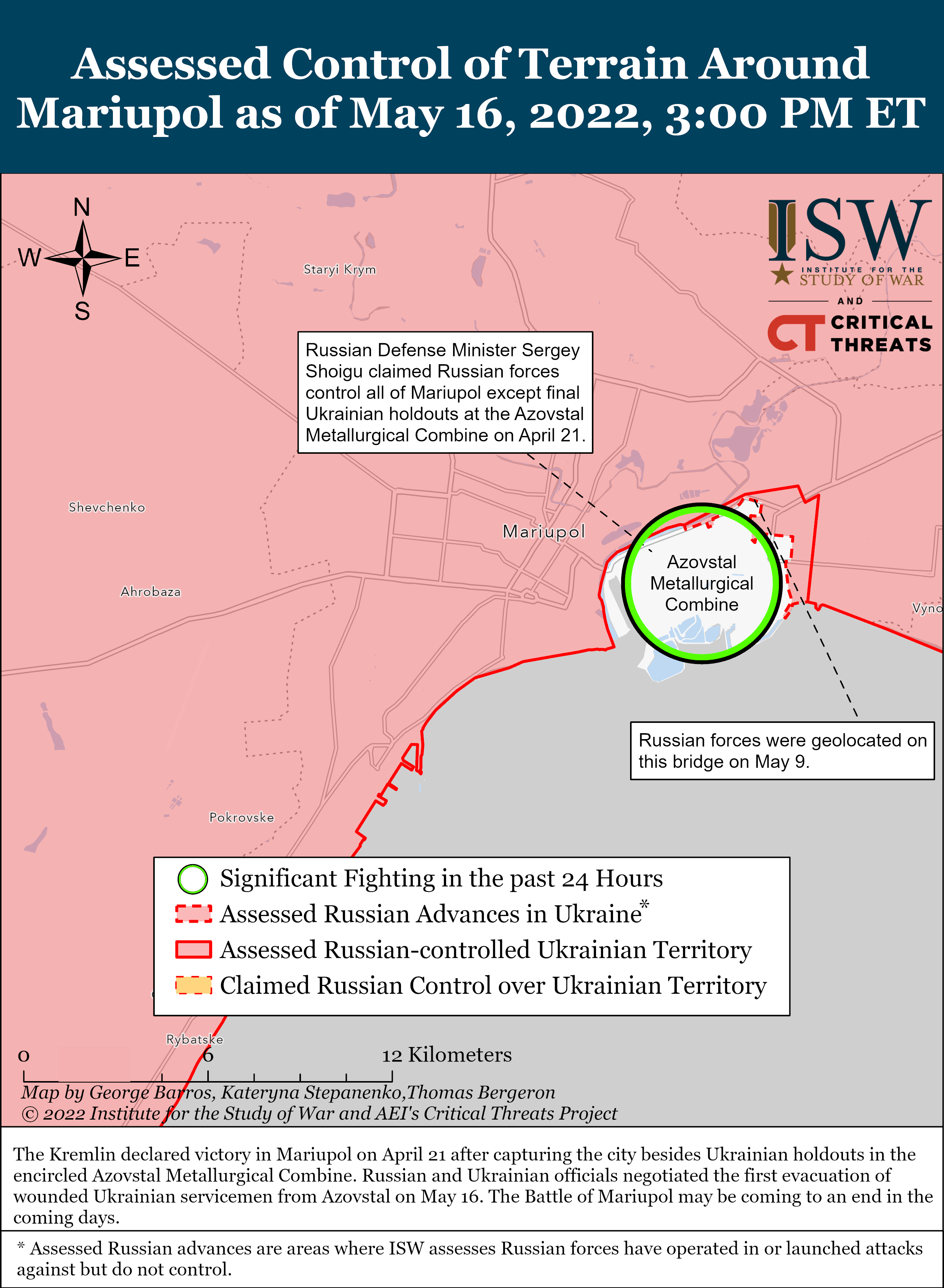 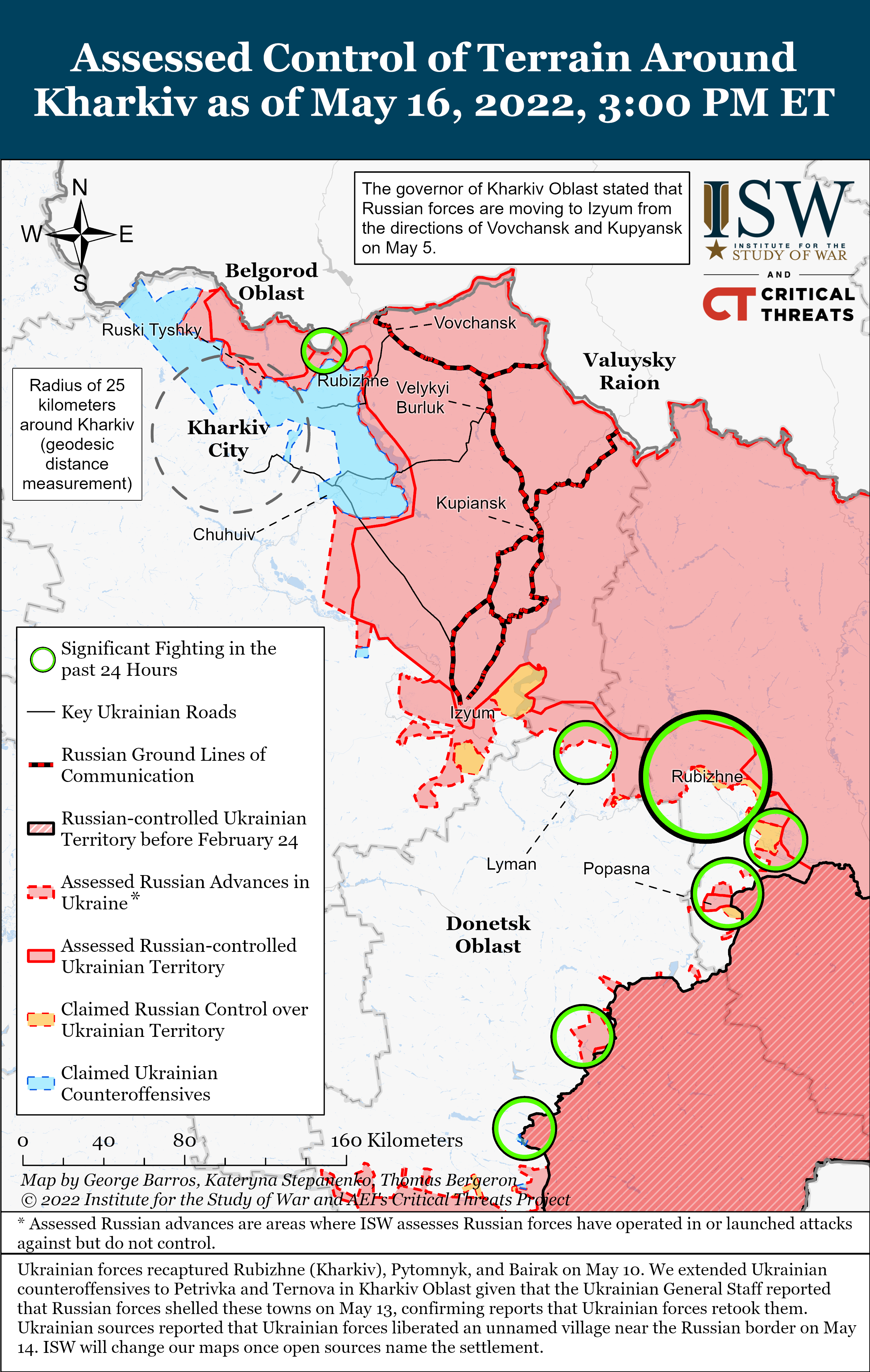 Russian forces continued to fortify their positions in Zaporizhia Oblast and did not conduct active offensive operations on the Southern axis on May 16. The Ukrainian nuclear power company Energoatom reported that Russian forces dug trenches and established concrete barricades along the entire perimeter of the Zaporizhya Nuclear Power Plant in Enerhodar City.[28] ISW has previously reported that Russian forces have fortified settlements approximately 37 kilometers east of Enerhodar and in areas south of Melitopol.[29] Russian forces are likely fortifying positions to establish long-term control over the occupied settlements. The Zaporizhia Oblast Military Administration also noted that Russian forces destroyed a highway between Russian-controlled settlements in Polohy district and areas of Ukrainian counteroffensives near Huliapole, approximately 47 and 60 kilometers west of the Donetsk Oblast border.[30] Road-bound Russian forces may abandon their efforts to seize Huliapole and instead establish defensive positions.[31]

Russian forces launched another missile strike on Odesa Oblast, likely in effort to completely destroy the damaged bridge over Dniester estuary.[34] Russian forces will likely continue to target Ukrainian transport infrastructure connecting Odesa Oblast with Romania to disrupt one route by which Western countries can provide aid to Ukraine. Ukraine’s Southern Operational Command reported that Russian forces are continuing rescue operations on Snake Island following Ukrainian strikes against the Russian grouping on the island.[35] The situation in Transnistria did not change.[36] 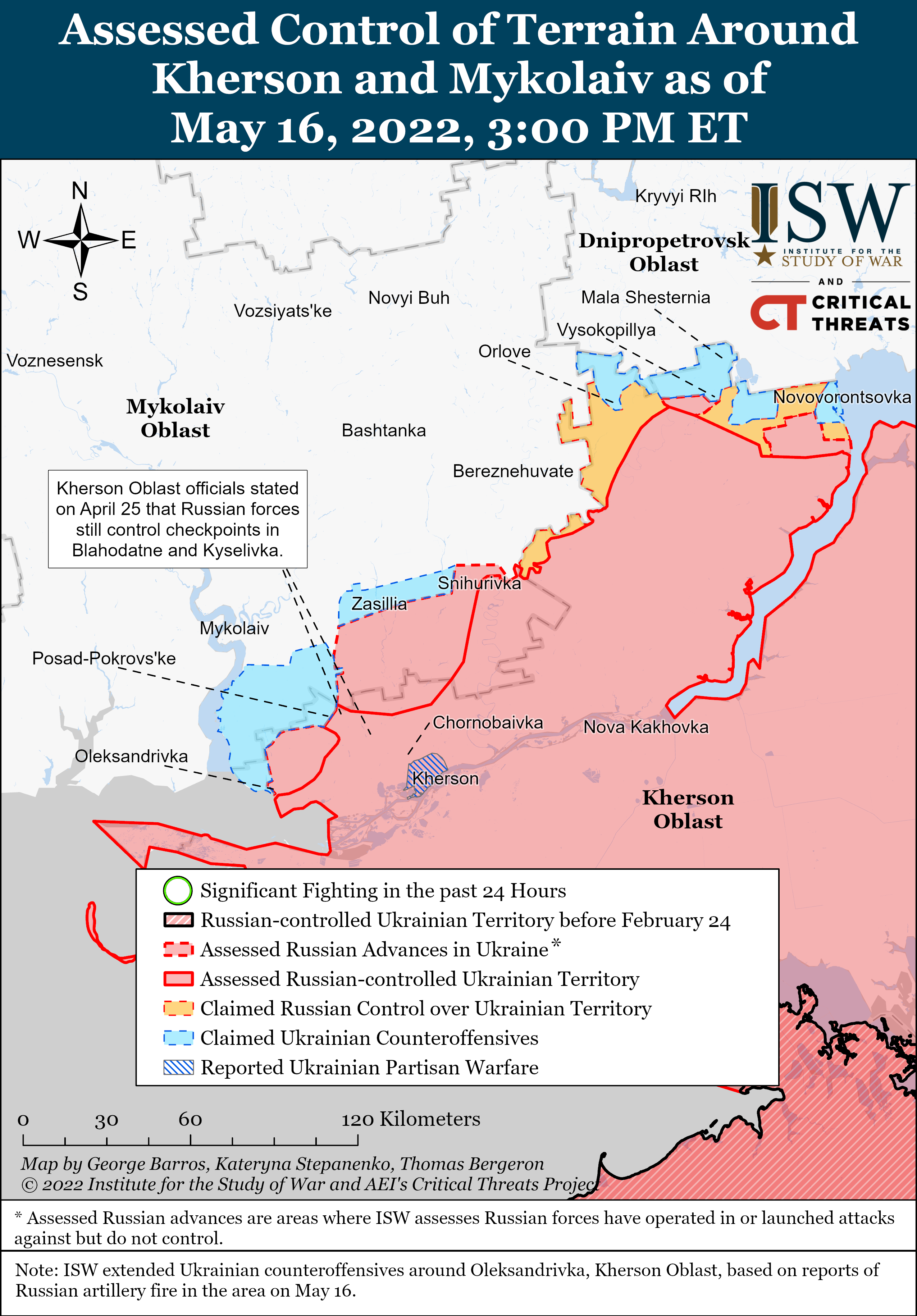