Army General Sergey Surovikin’s previous experience as commander of Russian Armed Forces in Syria likely does not explain the massive wave of missile strikes across Ukraine over the past few days, nor does it signal a change in the trajectory of Russian capabilities or strategy in Ukraine. Ukraine’s Main Intelligence Directorate (GUR) representative, Andriy Yusov, linked the recent strikes to Surovikin’s appointment as theatre commander and stated on October 11 that “throwing rockets at civilian infrastructure objects” is consistent with Surovikin’s tactics in Syria.[6] However, Surovikin has been serving in Ukraine (as the Commander of the Russian Aerospace Forces and then reportedly of the southern grouping of Russian forces) since the beginning of the war, as have many senior Russian commanders similarly associated with Russian operations in Syria.[7] Army General Aleksandr Dvornikov, who was appointed in April to the role that Surovikin now holds, similarly commanded Russian forces in Syria between 2015-2016 and became known for deliberately and brutally targeting civilians.[8] Colonel General Aleksandr Chayko, the former commander of the Eastern Military District who took an active part in the first stages of the war in Ukraine, also served as Chief of Staff of Russian forces in Syria from 2015 and into 2016.[9] As ISW noted in April, all Russian military district, aerospace, and airborne commanders served at least one tour in Syria as either chief of staff or commander of Russian forces, and Russian forces deliberately targeted civilian infrastructure including hospitals and breadlines throughout the period of Russia’s active engagement in that war.[10] Disregard for international law and an enthusiasm for brutalizing civilian populations was standard operating procedure for Russian forces in Syria before, during, and after Surovikin’s tenure.  It has become part of the Russian way of war.

Surovikin’s appointment will not lead to further “Syrianization” of Russian operations in Ukraine because the battlespace in Ukraine is fundamentally different from the battlespace in Syria, and direct comparisons to Surovikin’s Syrian “playbook” obfuscate the fact that Russia faces very different challenges in Ukraine. Russia cannot further “Syrianize” the war largely because of its failure to gain air superiority, which precludes its ability to launch the kind of massive carpet-bombing campaigns across Ukraine that it could, and did, conduct in Syria. ISW has previously assessed that Russian air operations would have been markedly different if conducted in contested airspace or a more challenging air-defense environment, as is the case in Ukraine.[11] It is therefore highly unlikely that Surovikin’s role as theatre commander will cause a fundamental change in Russian air and missile operations in Ukraine as long as Ukraine’s Western backers continue to supply Kyiv with the air defenses needed to prevent Russia from gaining air superiority.

Russian military officials may instead have coordinated Surovikin’s appointment and the October 10 cruise missile strikes on Ukrainian critical infrastructure to rehabilitate the perception of the Russian Ministry of Defense (MoD). Whoever was appointed as theatre commander would have overseen the October 10 cruise missile strikes, which Ukrainian intelligence reported had been planned as early as October 2 (and which Surovikin certainly did not plan, prepare for, and conduct on the day of his appointment).[12] Russian milbloggers have recently lauded both the massive wave of strikes on October 10 and Surovikin’s appointment and correlated the two as positive developments for Russian operations in Ukraine. This narrative may be aligned with ongoing Russian information operations to rehabilitate the reputation of Central Military District Command Colonel General Aleksandr Lapin following Russian failures around Lyman as part of a wider campaign to bolster public opinion of the Russian military establishment. The Russian MoD is evidently invested in repairing its public image, and the informational effects of the October 10 missile strikes and the appointment of Surovikin, a hero in the extremist nationalist Russian information space, are likely intended to cater to the most vocal voices in that space.

The Russian Federation is likely extracting ammunition and other materiel from Belarusian storage bases—activity that is incompatible with setting conditions for a large-scale Russian or Belarusian ground attack against Ukraine from Belarus. The Ukrainian Main Military Intelligence Directorate (GUR) reported on October 11 that a train with 492 tons of ammunition from the Belarusian 43rd Missile and Ammunition Storage Arsenal in Gomel arrived at the Kirovskaya Railway Station in Crimea on an unspecified recent past date.[13] The GUR reported that Belarusian officials plan to send an additional 13 trains with weapons, equipment, ammunition, and other unspecified materiel from five different Belarusian bases to the Kamenska (Kamensk-Shakhtinsky) and Marchevo (Taganrog) railway stations in Rostov Oblast on an unspecified future date. Open-source social media footage supports this report. Geolocated footage showed at least two Belarusian trains transporting Belarusian T-72 tanks and Ural military trucks in Minsk and Tor-M2 surface-to-air missile launchers in Orsha (Vitebsk Oblast) on October 11.[14] Belarusian equipment movements into Russia indicate that Russian and Belarusian forces likely are not establishing assembly areas in Belarus. Belarusian equipment and supply movements to Crimea and Rostov Oblast indicate that Russian forces are less confident about the security of Russian ground lines of communication running through northern and western Luhansk Oblast given the ongoing Ukrainian counteroffensive there. Ukraine’s General Staff reiterated that it monitors Belarus and has not observed indicators of the formation of offensive groups in Belarus on October 11.[15] Russian and or Belarusian forces remain unlikely to attack Ukraine from Belarus, as ISW has previously assessed.[16]

Belarus remains a co-belligerent in Russia’s war against Ukraine, nonetheless. Belarus materially supports Russian offensives in Ukraine and provides Russian forces with havens from which to attack Ukraine with precision munitions. Russian forces struck Kyiv with Shahed-136 drones launched from Belarusian territory on October 10.[17] The GUR additionally reported that Russia deployed 32 Shahed-136 drones to Belarus as of October 10 and that Russia will deploy eight more to Belarus by October 14.[18] 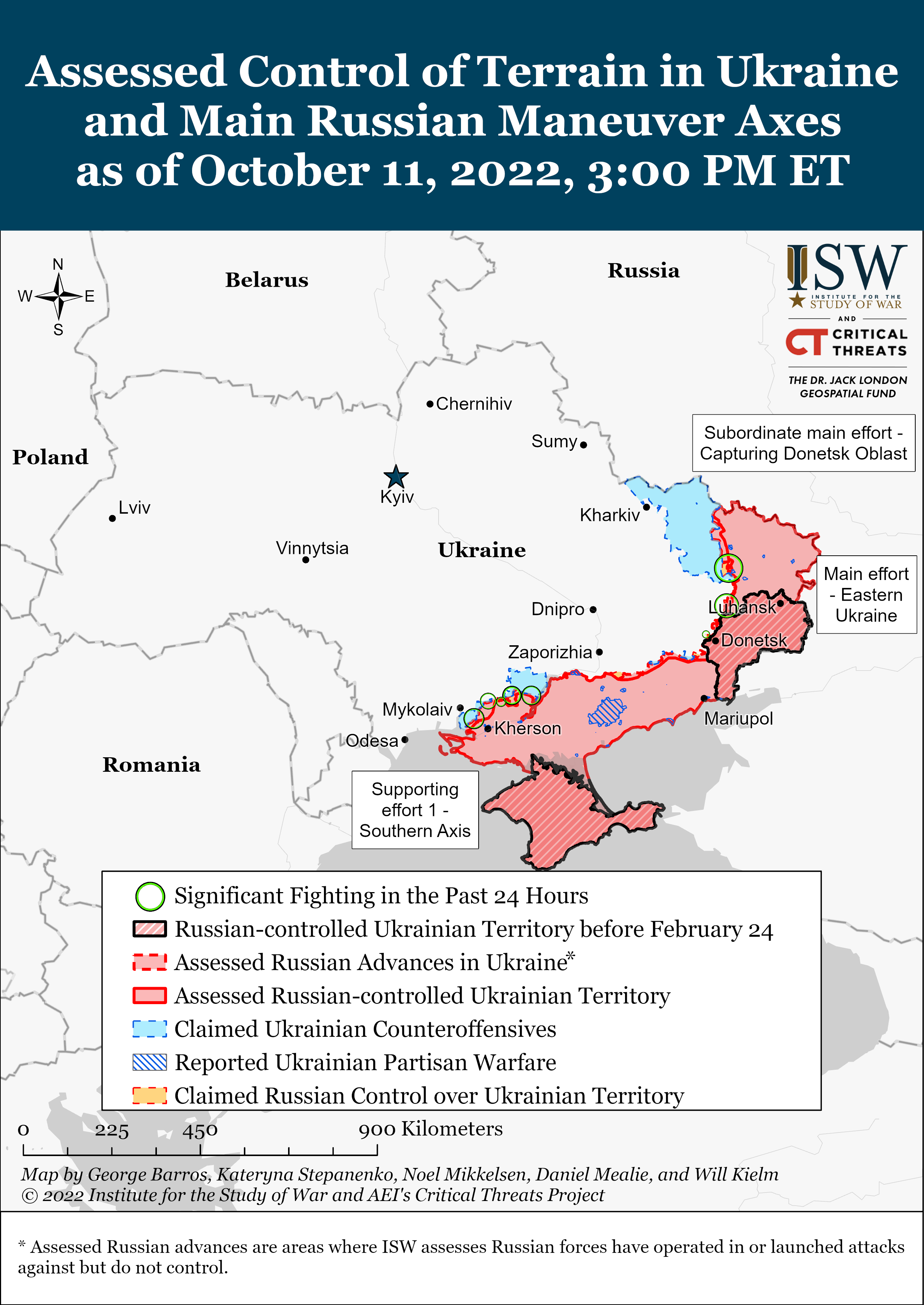 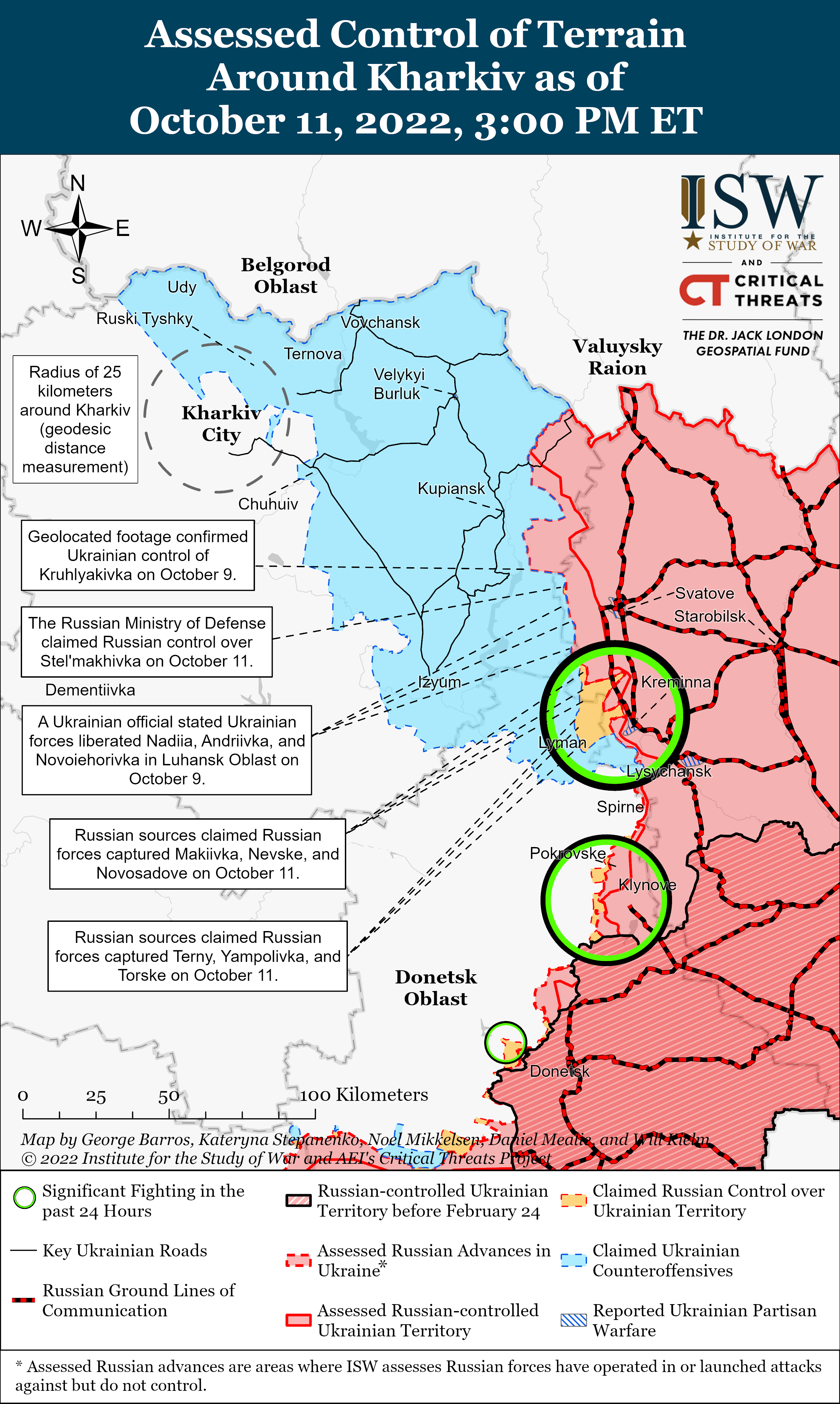 Russian sources continued to claim that Ukrainian troops conducted ground attacks in northern and western Kherson Oblast on October 11. The Russian MoD claimed that two Ukrainian battalion tactical groups (BTGs) conducted offensive operations in the direction of Borozenske and Piatykhatky—both along the current Davydiv Brid-Dudchany frontline in northern Kherson Oblast and about 35km from the critical Russian-controlled town of Beryslav.[28] A Russian milblogger similarly indicated that Ukrainian troops are preparing to advance south of the Davydiv Brid-Dudchany line and conducting artillery preparations for subsequent attacks on Russian positions in the direction of Beryslav.[29] Russian milbloggers additionally indicated that Ukrainian troops are attempting to reinforce positions in the Davydiv Brid area (western Kherson Oblast near the Mykolaiv Oblast border and along the Inhulets River) to prepare for advances to the southeast.[30] Several Russian sources reported that Ukrainian troops attempted to attack toward Bruskynske (6km south of Davyvid Brid), Ishchenka (8km southeast of Davydiv Brid), and Sadok (12km southeast of Davydiv Brid).[31] ISW offers no evaluation of these Russian claims regarding likely future Ukrainian operations or force groupings. 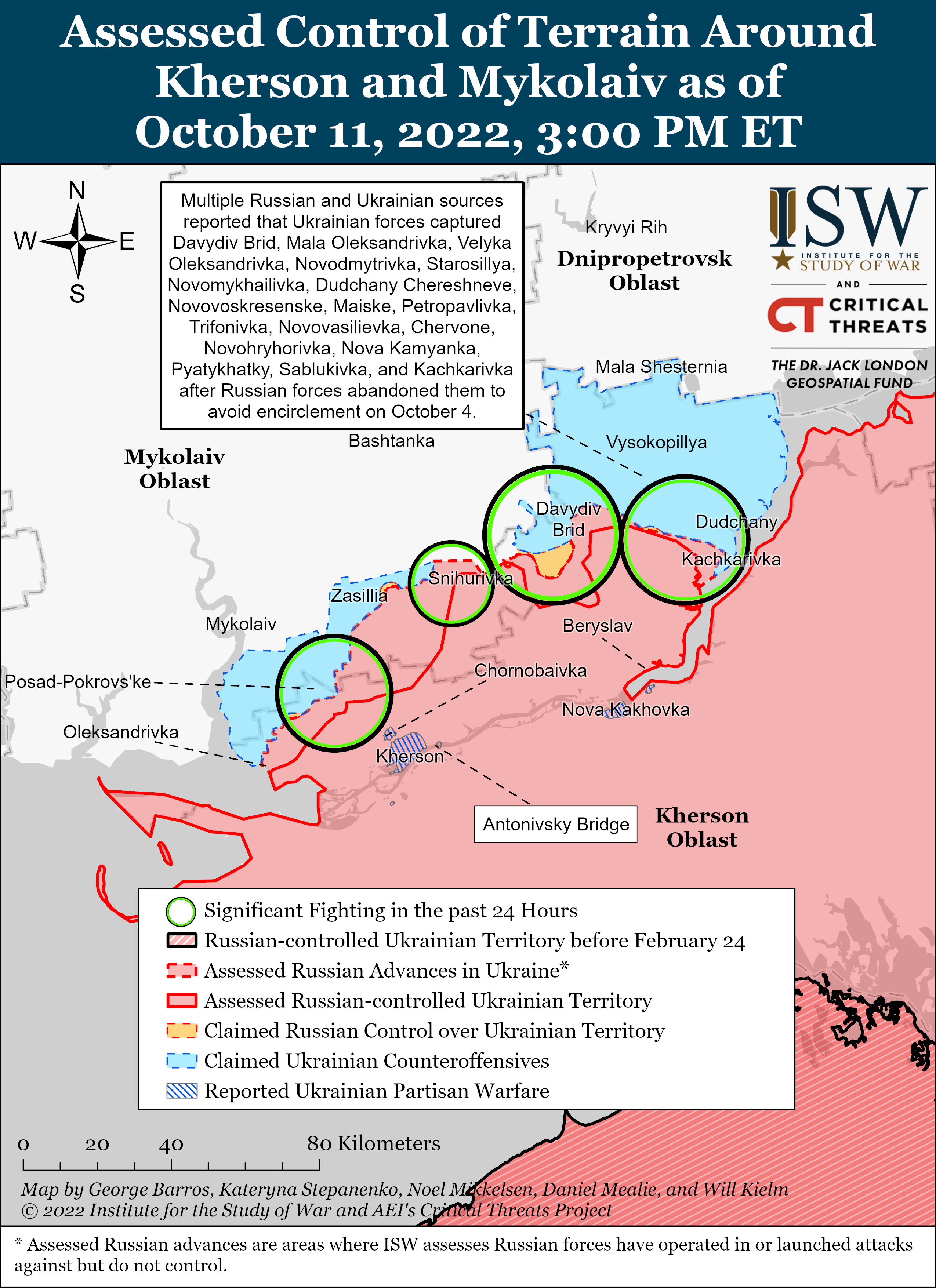 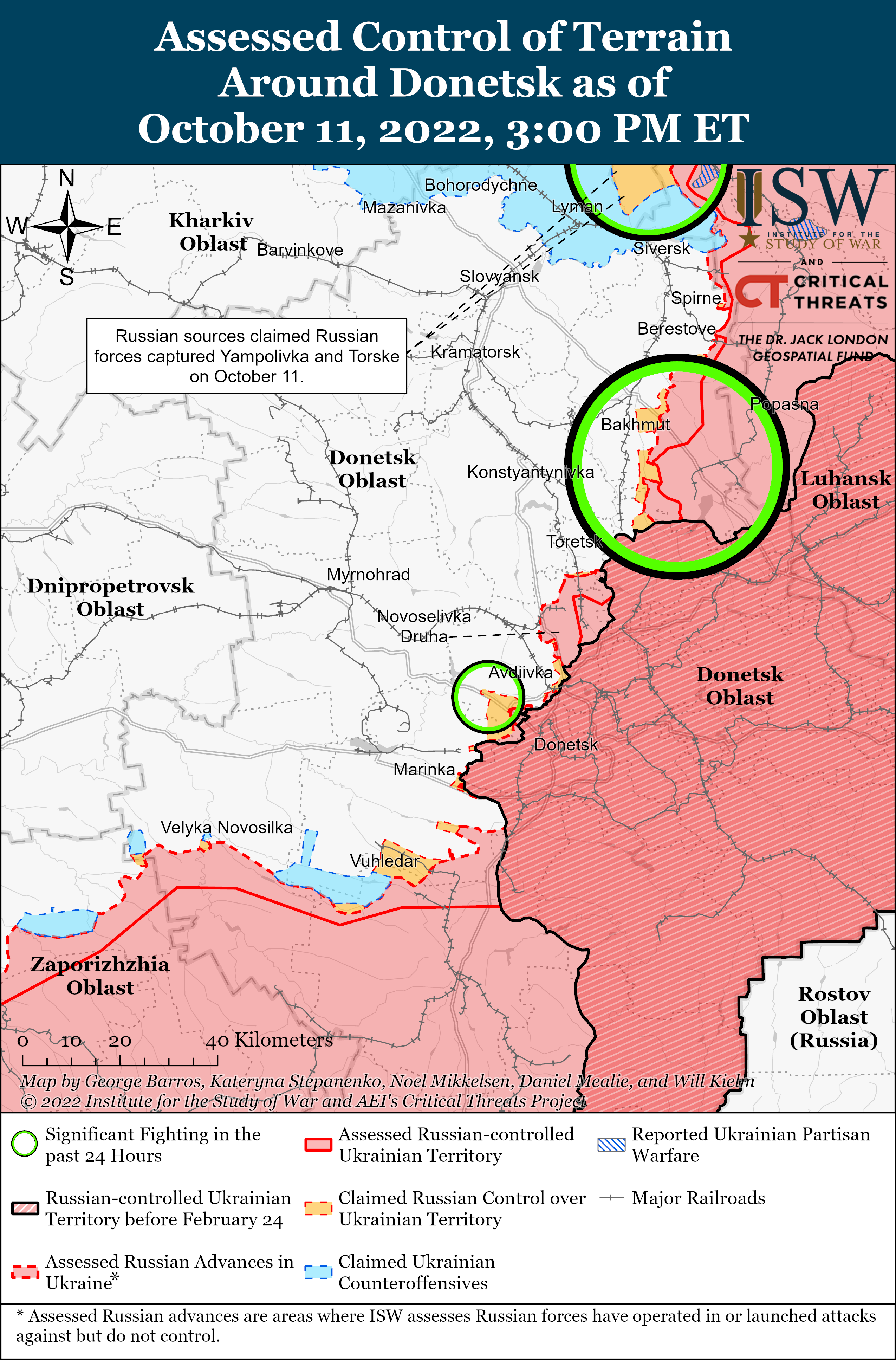 Russian sources reported explosions in Dzhankoy, Crimea, on October 11. A Russian milblogger reported that the explosion occurred at a rail junction between the Kherson-Kerch and Kharkiv-Sevastopol rail lines but did not identify a cause.[43] The source noted that the only logistics route through Crimea that supplies Russian forces in southern Ukraine runs through Dzhankoy.[44] Russian news outlet Baza reported that a Russian tank accidentally fired while undergoing repairs, striking a house in Dzhankoy and wounding a child.[45] The reporting and claims over this incident indicate Russian panic over losing further logistics capabilities in Crimea following the Kerch Strait Bridge explosion.

The Russian military command continues to deploy newly mobilized servicemen without combat training to frontlines in eastern and southern Ukraine. Luhansk Oblast Administration Head Serhiy Haidai reported that “thousands” of mobilized men are arriving in Luhansk Oblast but noted that only the first groups of these servicemen have any type of military experience.[52] A Ukrainian Telegram channel uploaded a video of Russian mobilized men complaining about their deployment to Svatove from Moscow Oblast only 11 days after being drafted and despite their minimal or nonexistent military experience.[53] Russian forces are also training mobilized men in occupied Ukrainian regions. A member of the Zaporizhia Oblast occupation administration, Vladimir Rogov, stated that Russian mobilized personnel are undergoing training in the suburbs of Melitopol.[54] Footage also shows mobilized personnel reportedly training in occupied Luhansk Oblast.[55] Mariupol Mayor’s Advisor Petro Andryushenko noted that the arrival of Russian military equipment in the direction of Manhush west of Mariupol, stating that Russian forces may be establishing a training center for the mobilized in the settlement.[56] The Ukrainian General Staff emphasized that the deployment of mobilized Russians to Ukraine will not undermine Ukrainian forces’ counteroffensives.[57]

Russian officials are continuing to use mobilization as a form of punishment against individuals who refuse the Kremlin’s mobilization orders. Governor of Magadan Oblast Sergey Nosov in a leaked conversation with subordinates demanded that they directly issue a mobilization order to the manager of the gold mining company for refusing to administer mobilization notices to his employees.[61] An unnamed business owner told RFE/RL that local officials are extorting businessmen for 10 percent of their employees in exchange for exempting firms’ top employees from mobilization.[62] The Kremlin has also mandated all Russian business owners to provide information regarding their employees to local military enlistment centers, and local officials may use these lists to coercively mobilize more men.[63] Local officials may use the guise of mobilization to demand bribes from business owners; Ukrainian and Russian sources have reported the emergence of such organized corruption schemes within the Russian defense sector.[64]

Some Russians continued to express resistance to mobilization throughout Russia. The Ukrainian General Staff reported that over a hundred mobilized men at an unspecified Eastern Military District training ground refuse to comply with command orders and are not leaving their barracks in protest of poor living and sanitary conditions.[67] A Russian man attempted to commit arson against a military recruitment center in Ryazan Oblast, and unknown perpetrators threw Molotov cocktails at a city hall in Chelyabinsk Oblast.[68]