Russian forces continue to conduct meaningless offensive operations around Donetsk City and Bakhmut instead of focusing on defending against Ukrainian counteroffensives that continue to advance. Russian troops continue to attack Bakhmut and various villages near Donetsk City of emotional significance to pro-war residents of the Donetsk People’s Republic (DNR) but little other importance. The Russians are apparently directing some of the very limited reserves available in Ukraine to these efforts rather than to the vulnerable Russian defensive lines hastily thrown up along the Oskil River in eastern Kharkiv Oblast. The Russians cannot hope to make gains around Bakhmut or Donetsk City on a large enough scale to derail Ukrainian counteroffensives and appear to be continuing an almost robotic effort to gain ground in Donetsk Oblast that seems increasingly divorced from the overall realities of the theater.

Russian failures to rush large-scale reinforcements to eastern Kharkiv and to Luhansk Oblasts leave most of Russian-occupied northeastern Ukraine highly vulnerable to continuing Ukrainian counter-offensives. The Russians may have decided not to defend this area, despite Russian President Vladimir Putin’s repeated declarations that the purpose of the “special military operation” is to “liberate” Donetsk and Luhansk oblasts. Prioritizing the defense of Russian gains in southern Ukraine over holding northeastern Ukraine makes strategic sense since Kherson and Zaporizhia Oblasts are critical terrain for both Russia and Ukraine whereas the sparsely-populated agricultural areas in the northeast are much less so. But the continued Russian offensive operations around Bakhmut and Donetsk City, which are using some of Russia’s very limited effective combat power at the expense of defending against Ukrainian counteroffensives, might indicate that Russian theater decision-making remains questionable.

Ukrainian forces appear to be expanding positions east of the Oskil River and north of the Siverskyi Donets River that could allow them to envelop Russian troops holding around Lyman. Further Ukrainian advances east along the north bank of the Siverskyi Donets River could make Russian positions around Lyman untenable and open the approaches to Lysychansk and ultimately Severodonetsk. The Russian defenders in Lyman still appear to consist in large part of BARS (Russian Combat Army Reserve) reservists and the remnants of units badly damaged in the Kharkiv Oblast counteroffensive, and the Russians do not appear to be directing reinforcements from elsewhere in the theater to these areas. 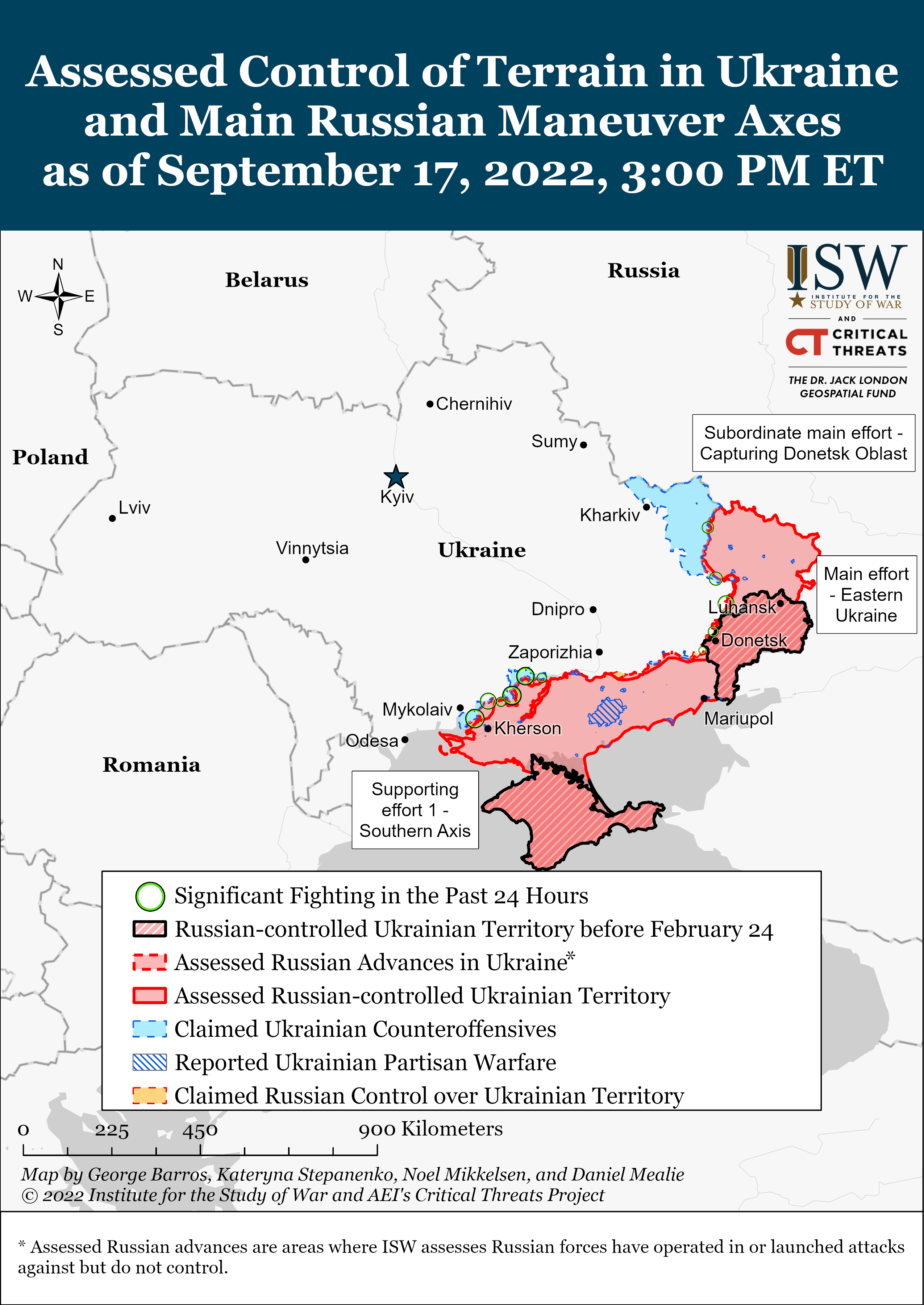 Ukrainian and Russian sources also reported kinetic activity on the northern segment of the Oskil River in Kharkiv Oblast. The Ukrainian General Staff and the Russian Defense Ministry reported that Russian forces are shelling Dvorichna (about 17km northeast of Kupyansk), while milbloggers speculated that Ukrainian forces are preparing for an eastward counterattack from the settlement.[8] Geolocated footage showed Ukrainian artillery fire on Russian military equipment operating on the eastern bank of the Oskil River, approximately 38 northeast of Izyum.[9] 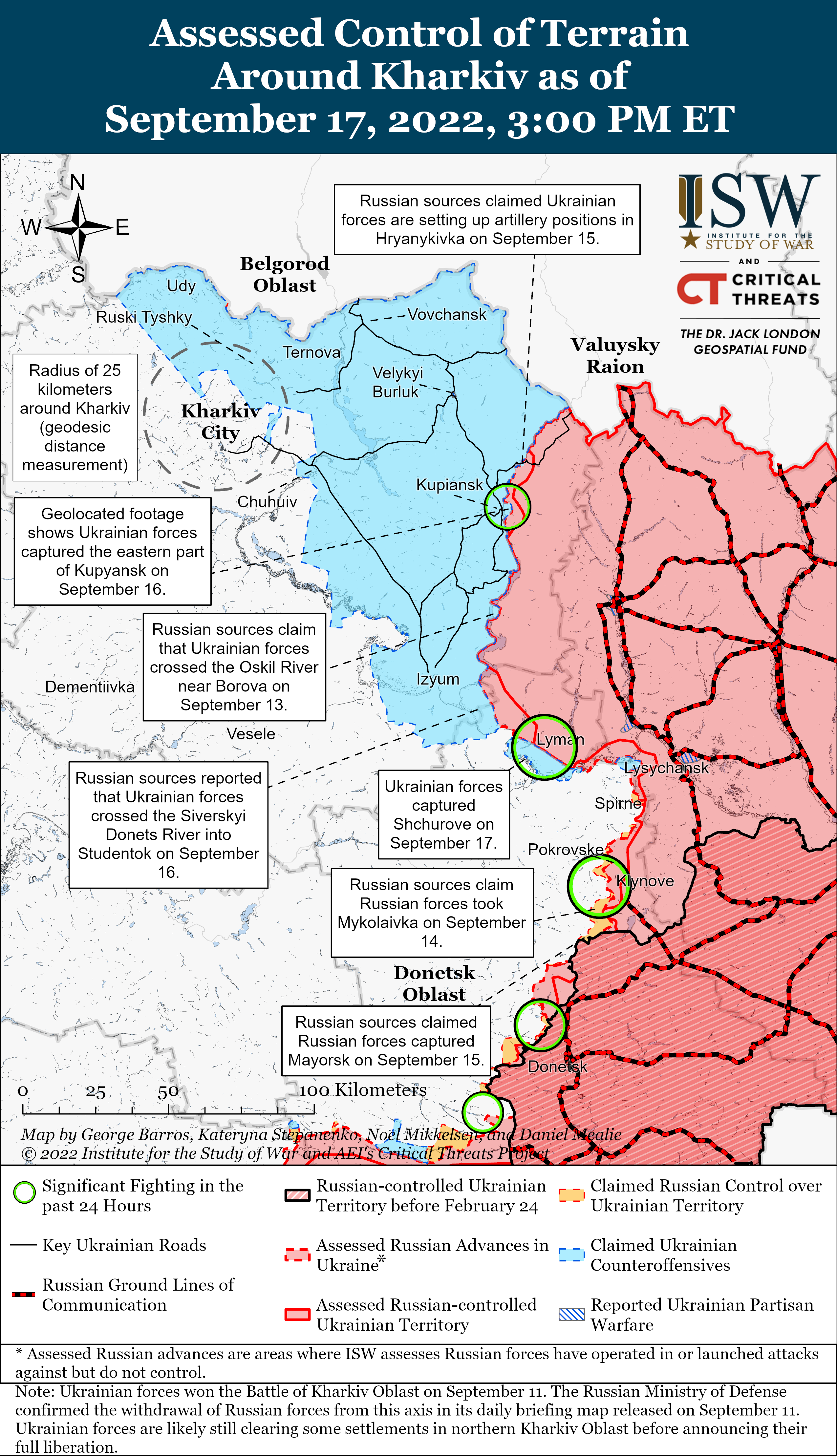 Ukrainian military officials maintained their operational silence regarding the progress of the counteroffensive on September 17 but noted the continuation of the Ukrainian interdiction campaign in Kherson Oblast. The Ukrainian Southern Operational Command reported that Ukrainian forces struck an alternative Russian pontoon crossing near Sadove (approximately 17km east of Kherson City), an electronic warfare (EW) station in Nova Kakhovka, and a Russian concentration area in Stara Zburyivka (about 23km southwest of Kherson City).[10] The Ukrainian General Staff reported that Russian forces are preparing retreat routes, including a new crossing in the area of the Kakhovka Hydroelectric Power Plant, due to Ukrainian strikes on Russian crossings over the Dnipro River.[11] Ukrainian military officials noted that the Ukrainian strike on Kherson City on September 10 resulted in the deaths of over 180 Russian servicemen.[12] Social media footage corroborates Ukrainian official statements about the continuation of the interdiction campaign in Kherson Oblast. Residents reported smoke and explosions in Antonivka (on the left bank of the Dnipro River) and in Nova Kakhovka.[13]

Ukrainian and Russian sources reported kinetic activity in three main areas: northwest of Kherson City, near the Ukrainian bridgehead over the Inhulets River, and south of the Kherson-Dnipropetrovsk Oblast border near Vysokopillya. The Russian Defense Ministry and Russian milbloogers claimed that Russian forces repelled a Ukrainian “large-scale” attack on Pravdyne (approximately 28km northwest of Kherson City) on September 16.[14] Some milbloggers specified that Ukrainian forces advanced through Russian defenses Pravdyne with up to two reinforced companies (likely less than a battalion in strength), which is hardly a large-scale attack.[15] The Ukrainian Southern Operational Command also reported that Russian forces unsuccessfully attempted to attack Stepova Dolyna (the next settlement north of Pravdyne) from Pravdyne.[16] A milblogger claimed that Ukrainian forces are using helicopters to transfer troops to Sukhyi Stavok (about 12km southeast of the bridgehead), which if true, likely indicates the reduced capacity of Russian air defenses in the area.[17] Ukrainian and Russian forces noted that Russian forces continued to shell and launch airstrikes on Sukhyi Stavok.[18] Geolocated footage also showed Ukrainian forces firing at Russian positions in Davydiv Brid.[19] The Ukrainian Southern Operational Command reported that a Russian reconnaissance and sabotage group attempted a failed advance on Ukrainian-controlled Novovoznesenske (8km southeast of Vysokopillya) and conducted unsuccessful offensive operations in the direction of Arhanhelske-Ivanivka along the Inhulets RIver.[20]

Russian forces are intensifying filtration and social control measures in Kherson Oblast as a result of the Ukrainian counteroffensive in the region. A local Kherson Oblast Telegram channel reported that Russian forces are conducting filtration measures on Chaykovskiy Street in Kherson City.[21] Russian Telegram channels published footage of Russian servicemen firing at unspecified targets near the Kherson City railway terminal, claiming that Russian forces were conducting a “counterterrorist operation.”[22]

Russian forces continued operations and allocating reinforcements to offensive actions aimed at taking relatively small settlements in Donetsk Oblast rather than dedicating these forces to defending against ongoing Ukrainian counteroffensives. Russian forces conducted limited ground attacks and continued routine fire throughout Donetsk Oblast on September 17.[23] The Ukrainian General Staff reported that Ukrainian forces repelled Russian ground assaults on and south of Bakhmut, on and west of Avdiivka, and southwest of Donetsk City.[24] Russian sources claimed that Russian forces made incremental advances into the eastern and southern outskirts of Bakhmut.[25] Russian sources claimed that Russian forces repelled a Ukrainian ground attack on Berestove, 15km northeast of Soledar on the T1302.[26] Mariupol Mayoral Advisor Petro Andryushchenko reported on September 17 that Russian forces transported a column of 15 Russian tanks marked with the 3rd Army Corps symbol from Mariupol towards Donetsk City, likely to reinforce Russian positions along the Bakhmut-Donetsk City front line.[27] 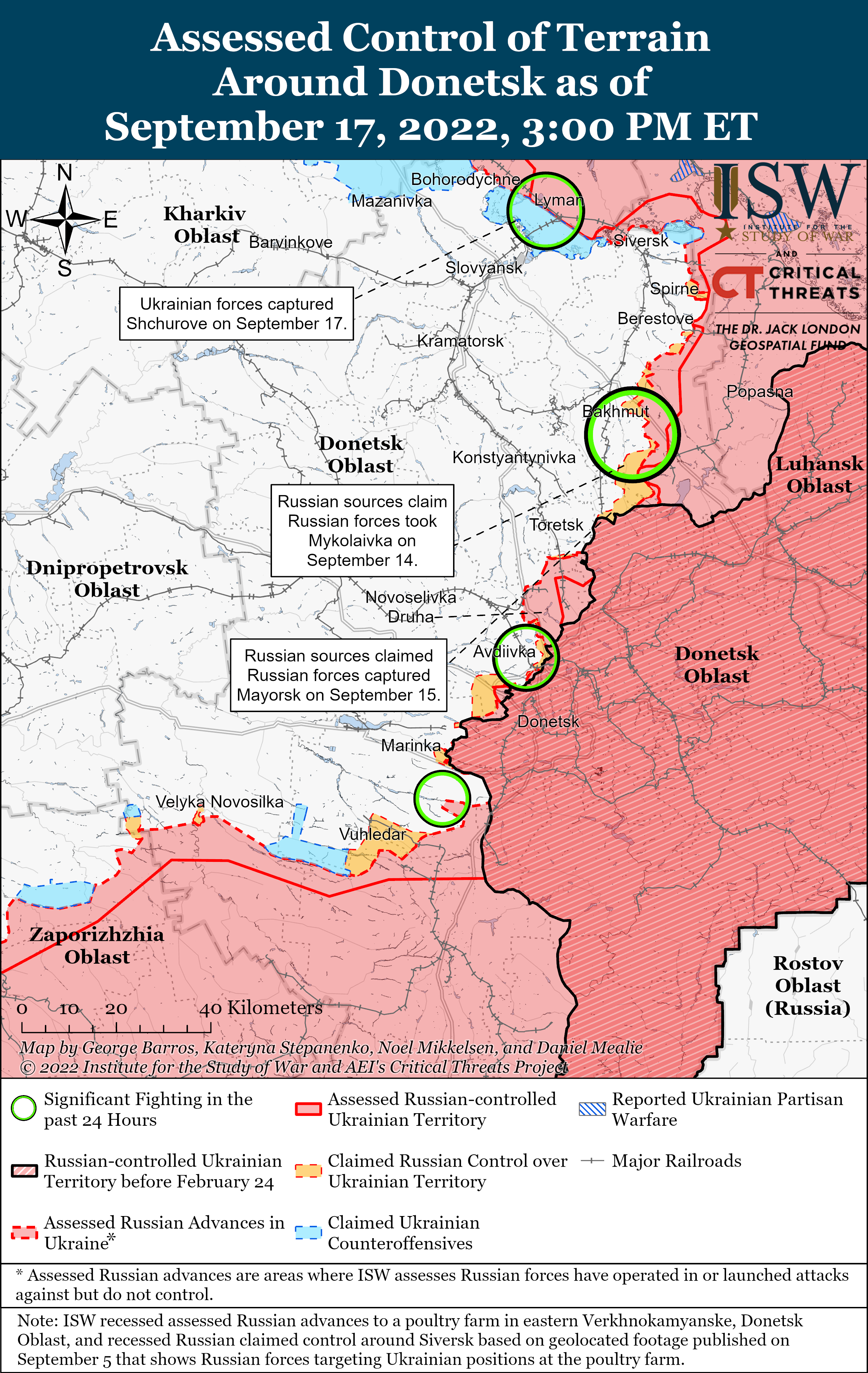 The International Atomic Energy Agency (IAEA) announced on September 17 that Ukrainian authorities reconnected the Zaporizhzhia Nuclear Power Plant (ZNPP) to the Ukrainian power grid following repairs to the main external power lines on September 16.[39] Ukrainian state nuclear agency Energoatom announced on September 16 that a large convoy containing spare parts, chemical reagents, and diesel fuel traveled through Russian checkpoints and arrived at the ZNPP on September 16 that enabled Energoatom engineers to conduct the repairs necessary to reconnect the ZNPP to the Ukrainian power grid.[40] The Russian Ministry of Defense claimed that Ukrainian forces “resumed provocations” by shelling the area around the ZNPP on September 17 but provided no evidence of the claimed shelling.[41] Russian forces continued routine strikes against areas on the north bank of the Kakhovka Reservoir opposite Enerhodar.[42] 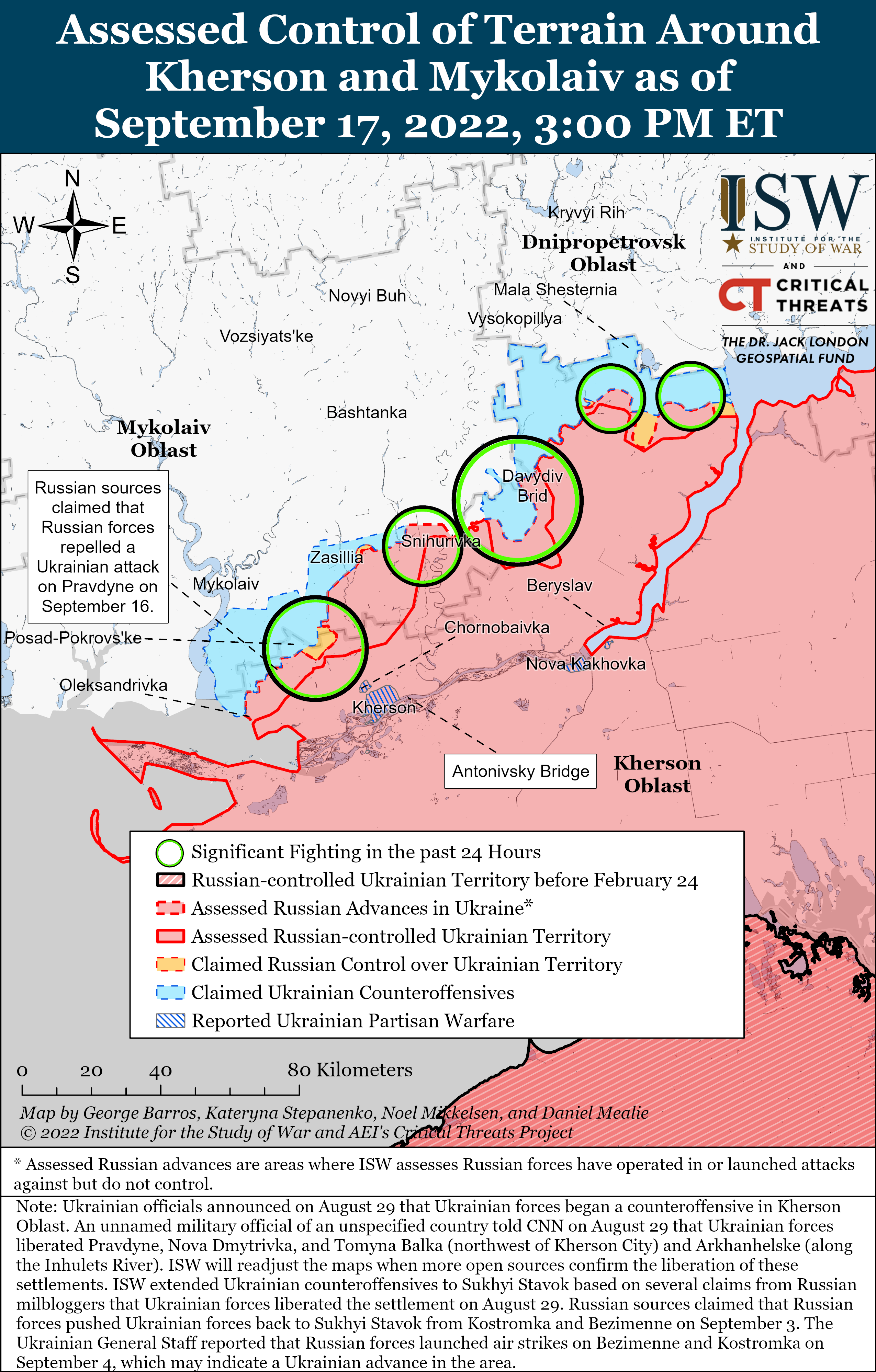 Russian authorities are seeking warm bodies to confront Ukrainian counteroffensives in the absence of trained soldiers and are taking extreme measures to speed recruitment efforts. A recruitment poster in Sevastopol advertised a mere 10 days of training for recruits prior to deployment as a part of the 810th Guards Naval Infantry Brigade of the Black Sea fleet, which Ukrainian sources report has lost over 85% of its personnel.[43] The report noted that locals spotted similar posters in Bakhchysarai, Simferopol, Kerch, and Yalta, Crimea.[44] Ten days is not remotely enough time to provide even basic levels of military training. The commitment of such “troops” will more likely further degrade Russian forces’ capability to defend against Ukrainian forces and conduct their own offensive operations than add to Russian combat power.

Conditions for Russian soldiers continue to vary depending on the soldiers’ contract status and Russian sources reported a systematic preference for “traditional” contract soldiers over reservists. The Russian Union of Paratroopers and a Russian milblogger posted a public call to action on September 14 that details the poor treatment of BARS personnel in receiving promised benefits, recording their contracts, and in the documentation and quality of their medical care.[47] The post claimed that the Russian milblogger has gathered nearly two dozen reports of such treatment from a single unit from Rostov-on-Don and that some BARS personnel were thrown on the streets with no money or supplies to get home and some returned home with untreated injuries.[48] The post appealed to the Russian Ministry of Defense to protect the rights of military personnel and prosecute the worst perpetrators of unequal treatment.[49]

Russian authorities reported that Ukrainian children forcibly deported to Russia for adoption have received Russian citizenship and may be separated from their siblings.[51] Russian Presidential Commissioner for Children’s Rights Maria Lvova-Belova stated that Russian authorities are working to place 125 “orphan” Ukrainian children from occupied Donetsk Oblast with Russian families but may have to separate siblings from families with over seven children.[52] Lvova-Belova stated that Russian authorities have already granted these children Russian citizenship and are conducting “psychological testing” to determine appropriate placement with Russian families.[53] As ISW has previously reported, the forcible transfer of children from one group to another “with intent to destroy, in whole or in part, a national, ethnical, racial or religious group” is a violation of the Convention on the Prevention and Punishment of the Crime of Genocide.[54]