Russian independent polling organization Levada posted survey results on September 1 indicating that while the majority of Russians still support military operations in Ukraine, public support for the war may be gradually declining. Levada stated that the overall support for Russian forces in Ukraine has not changed significantly over the summer, with 76% of the survey’s respondents in favor of the action of Russian forces in Ukraine (46% strongly supporting and 30% generally supporting).[1] Levada also noted that 48% of respondents believe that it is necessary for Russian operations in Ukraine to continue.[2] The polls showed that 44% of respondents were in favor of peace negotiations and that a majority of Russia’s younger segments of the population (18-39-year-olds) favor negotiations.[3] In March of 2022, Levada found that 53% of respondents strongly support Russian military actions in Ukraine but that the percentage of respondents in this category declined to 46% by August.[4] This is a minor deterioration and will not fundamentally impair the Kremlin’s ability to conduct the war. However, declining support and war weariness will likely increasingly impede Russian recruitment and force generation efforts. 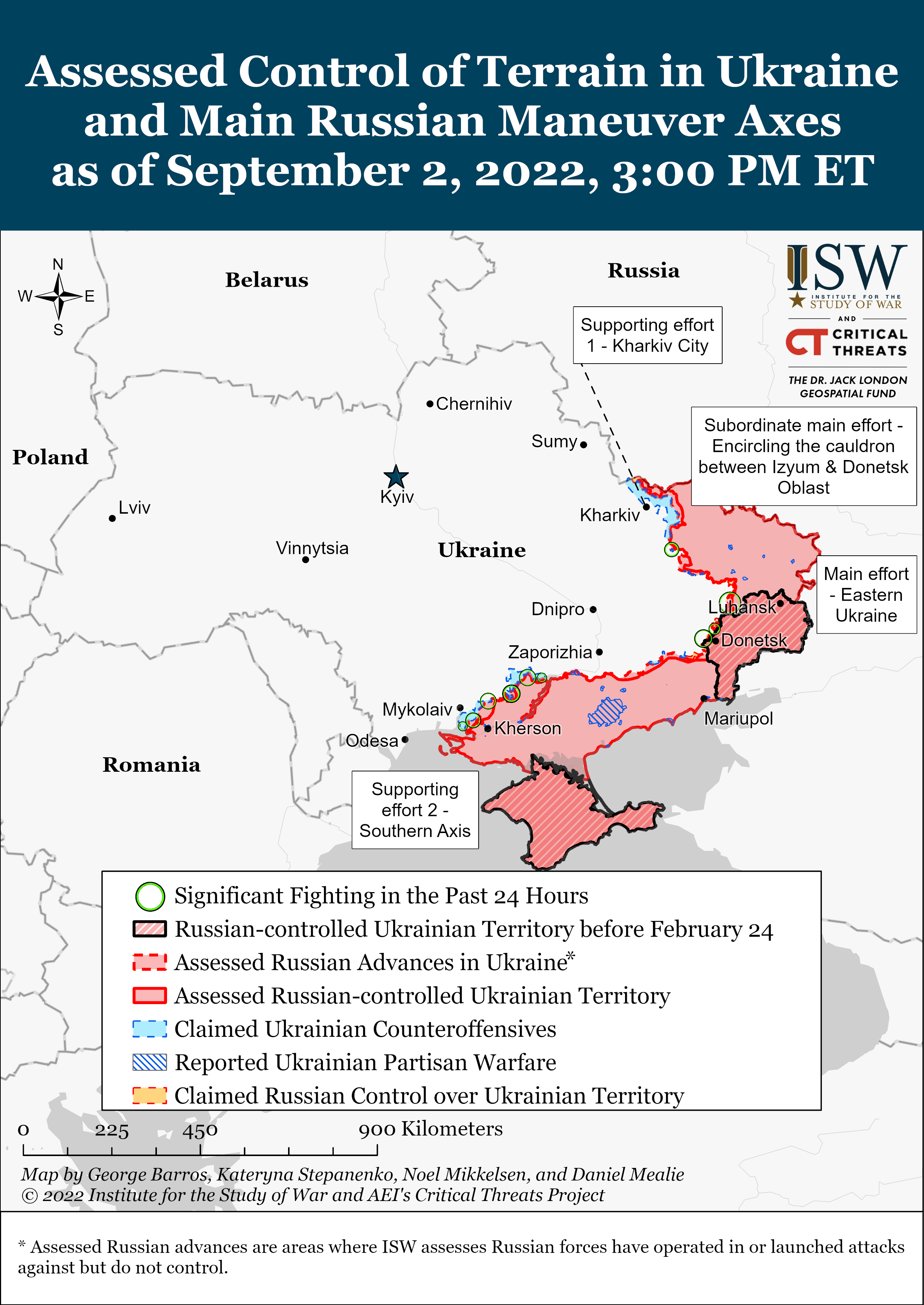 Ukrainian military officials reported that positional battles continued in unspecified areas of Kherson Oblast, but maintained operational silence on the progress of the Ukrainian counteroffensive on September 2.[10] The Ukrainian General Staff reported that Russian forces launched an unsuccessful ground assault in the direction of Potomkyne (just south of the Kherson-Dnipropetrovsk Oblast border), and notably launched airstrikes on Khreshchenivka in northern Kherson Oblast.[11] ISW previously assessed that Russian forces controlled Khreshchenivka, but Russian airstrikes in the area suggest Ukrainian forces could have advanced nearby. Russian milbloggers amplified a claim that Russian forces encircled Ukrainian troops in Petrivka, corroborating indications that Ukrainian forces likely entered Petrivka.[12]  NASA's Fire Information for Resource Management System (FIRMS) remotely sensed data for September 2 showed fires south of Khreshchenivka, which may further corroborate a Ukrainian advance in the area. ISW previously reported that FIRMS data showed fire activity in Petrivka (north of Khreshchenivka) on August 31 before Russian milbloggers reported on a Ukrainian presence in Petrivka the following day.[13] The Ukrainian General Staff also recorded airstrikes near the Ukrainian bridgehead over the Inhulets River, notably in Sukhyi Stavok.[14] ISW reported that many milbloggers claimed that Ukrainian forces advanced to Sukhyi Stavok on August 29.[15] 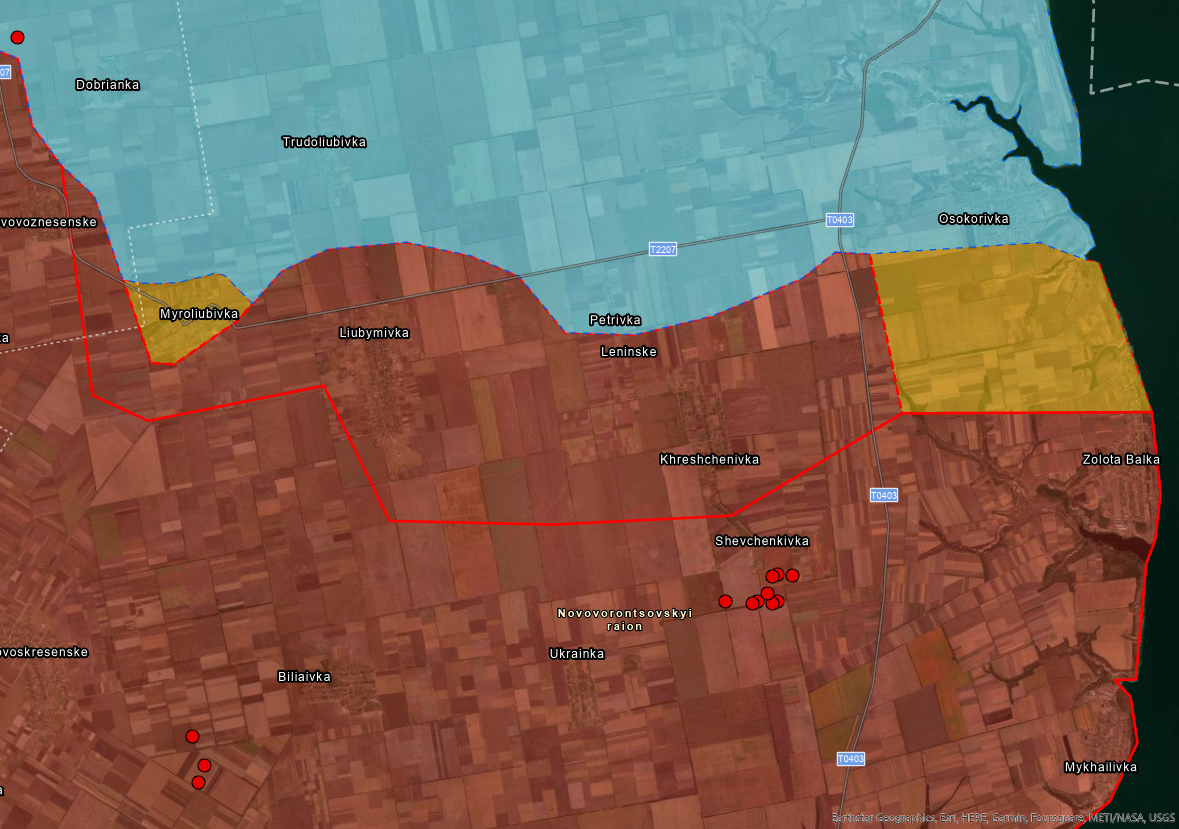 Russian milbloggers claimed that fighting continued in four directions, but ISW cannot independently verify all of these claims. Several milbloggers claimed that fighting continued east and west of Vysokopillya south of the Kherson-Dnipropetrovsk Oblast border, southeast of the Ukrainian bridgehead over the Inhulets River, around Snihurivka about 65km east of Mykolaiv City, and north of Kherson City.

The Russian Ministry of Defense maintained that Ukrainian forces continued to launch unsuccessful counteroffensive operations in the Mykolaiv-Kryvyi Rih direction.[41] The Russian Ministry of Defense added that Russian forces captured two Ukrainian prisoners of war, and some milbloggers reposted interrogation footage of a claimed Ukrainian POW.[42] Pro-Kremlin radio channel ”Komsomolska Pravda” interviewed Russian military expert Vladislav Shuryhin who likely falsely claimed that Ukrainian forces decided to launch a counteroffensive in the south out of fear of the newly-forming Russian 3rd Army Corps.[43] Russian forces likely instead accelerated the formation of the 3rd Army Corps to reinforce Russian positions around Izyum and eastern Zaporizhia Oblast and to replace Russian forces redeployed from other axes to reinforce Kherson Oblast before the Ukrainians announced their August 29 counteroffensive.[44]

Russian forces did not conduct any confirmed ground attacks along the Izyum-Slovyansk axis or toward Siversk on September 2 and continued routine shelling in these areas.[45]

Russian forces conducted limited ground attacks along the northern and western outskirts of Donetsk City on September 2. The Ukrainian General Staff stated that Russian troops attempted to advance toward Opytne, Pervomaiske, and Nevelske, all within 10km of the northwestern outskirts of Donetsk City.[49] Russian sources claimed that Russian and proxy forces, including the 11th DNR regiment, are using recently captured positions in Pisky to push westward of Donetsk City and establish strongholds around Pervomaiske.[50] Russian troops also reportedly continued offensive operations in the Avdiivka-Krasnohorivka area, about 5km north of Donetsk City’s outskirts.[51]

Russian forces did not conduct any confirmed ground attacks southwest of Donetsk City or in eastern Zaporizhia Oblast on September 2 and continued routine artillery strikes in these areas.[52] 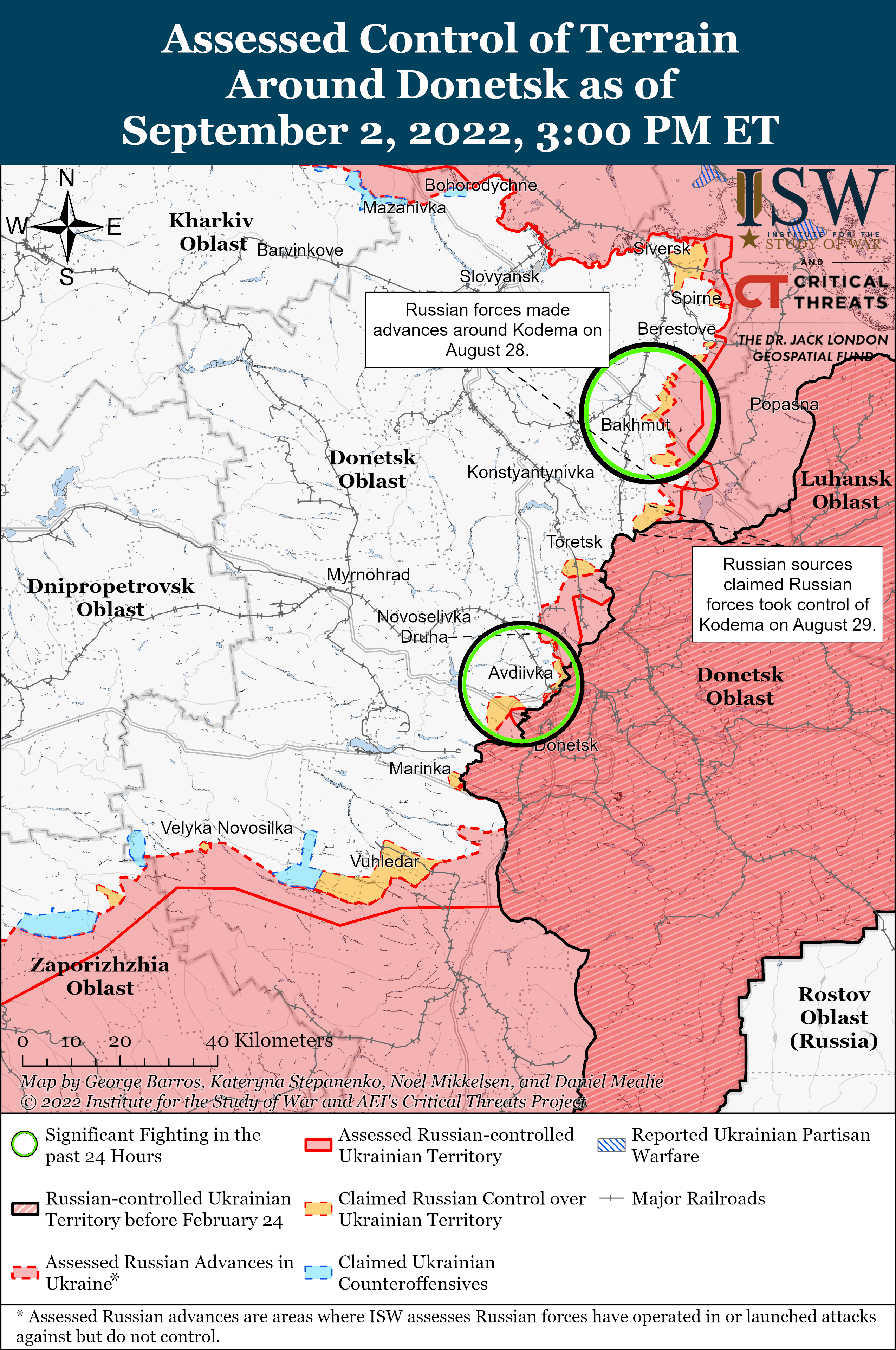 The Ukrainian General Staff notably reported that Ukrainian forces struck a Russian warehouse in Novoosynove, about 100km southeast of Kharkiv City along the Russian-controlled ground line of communication (GLOC) that runs into Kupyansk.[56] 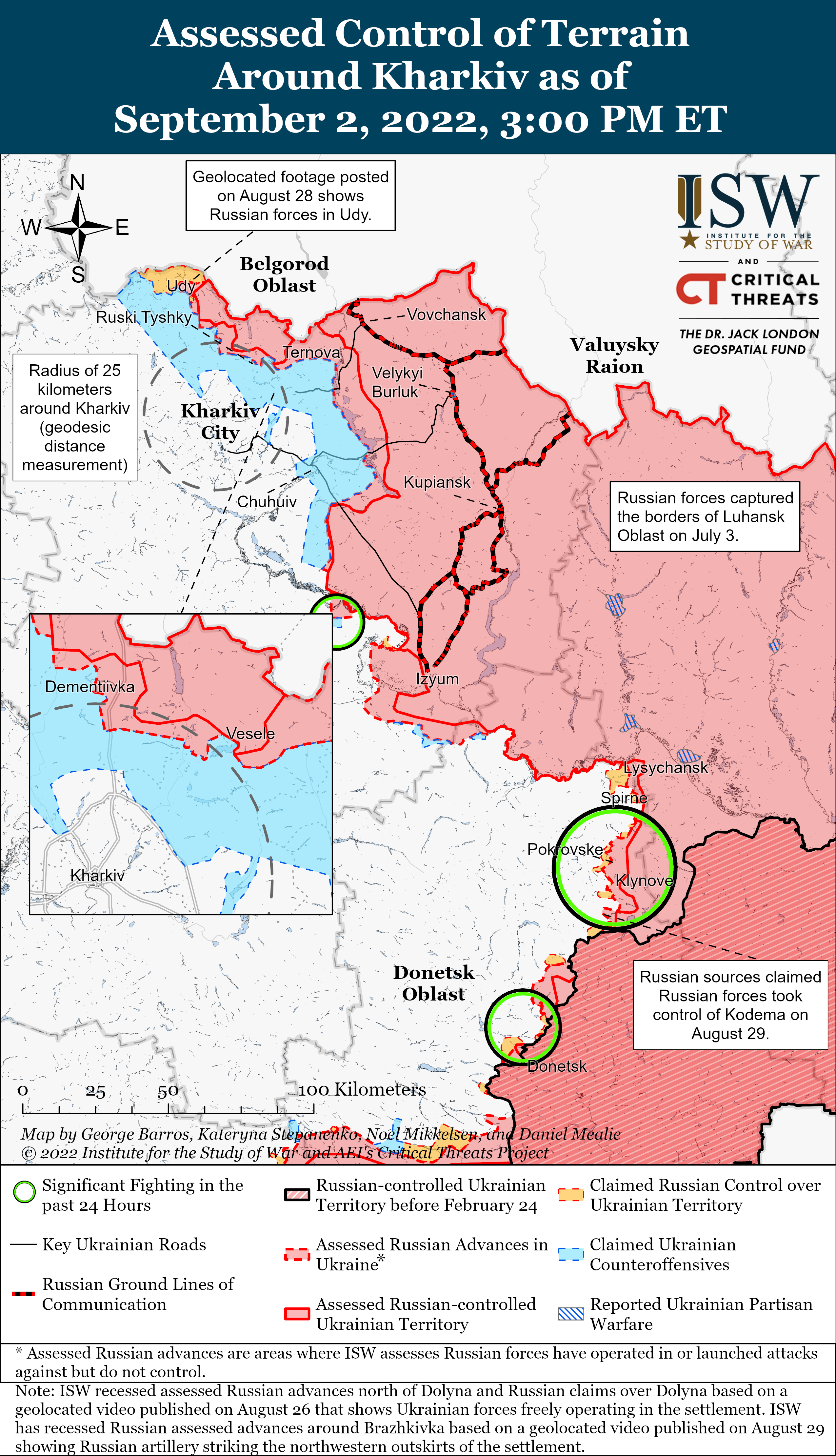 Russian forces did not conduct any ground attacks west of Hulyaipole and continued routine shelling along the line of contact in western Zaporizhia Oblast on September 2.[60] Russian sources claimed that Russian anti-tank mines stopped a Ukrainian advance near Orikhiv (at the intersection of the T0408, T0803, T0812, and T0815 highways) on an unspecified date.[61] A different Russian source posted footage of a Russian armored personnel carrier exploding after driving over a Ukrainian mine in the Zaporizhia direction on an unspecified date.[62]

Russian forces are likely reallocating military assets from rear areas to the Southern Axis. Ukrainian Adviser to the Mayor of Mariupol Petro Andryushchenko stated that Russian forces transported 10 tanks through Mariupol toward Berdyansk and noted that Russian forces have intensified the movement of military equipment west from Donetsk Oblast, through Mariupol, and towards Berdyansk over the last several days.[63] Radio Free Europe/Radio Liberty’s Crimean branch Krym Realii posted footage of a Russian military convoy heading north from the Kerch Bridge toward the Ukrainian mainland, likely to reinforce Russian units in Kherson Oblast.[64]

International Atomic Energy Agency (IAEA) Secretary General Rafael Mariano Grossi said on September 2 that there is evidence of violations of the physical integrity of the Zaporizhzhia Nuclear Power Plant (but did not specify an actor) and that the IAEA is establishing a continued presence at the ZNPP.[65] The Ukrainian General Staff stated that Russian forces removed all military equipment from the grounds of the ZNPP ahead of the IAEA delegation’s arrival, transporting 100 pieces to the Atomenergomash plant in central Enerhodar and distributing the remaining equipment among nearby settlements.[66] There were more reports of shelling around the ZNPP on September 2.[67] The Russian MoD and Defense Minister Sergey Shoigu accused Ukrainian forces of committing “nuclear terrorism” and endangering the ZNPP, supporting ISW’s prior assessment that Russian authorities will likely step up their efforts to portray Ukrainian forces as a danger to the international IAEA observers.[68] Ukrainian nuclear energy agency Energoatom reported that nuclear reactor No. 5 came back online on September 2 after Russian shelling reportedly caused it to disconnect on September 1.[69] 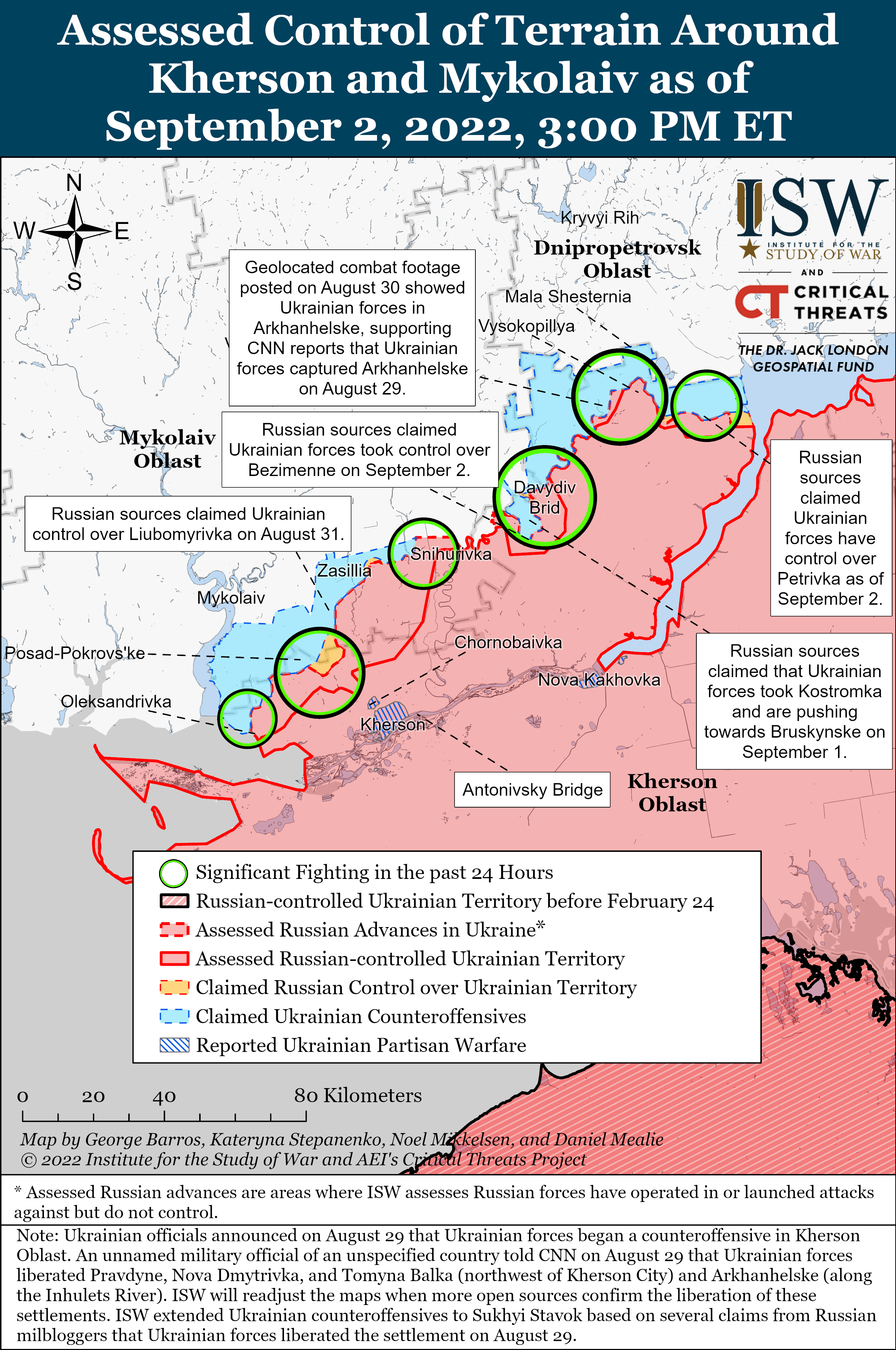 Ukrainian Military Intelligence Directorate (GUR) Spokesperson Vadym Skibitskyi stated that the Russian military can deploy an additional 300,000-350,000 personnel to Ukraine from units within Russia, Syria, Armenia, Tajikistan, Nagorno Karabakh, and Kazakhstan.[70]  While Skibitsky’s statement may be technically correct in that Russia has over 300,000 personnel in uniform in these locations, the vast majority of these personnel are support personnel not employable in direct combat roles, are required to maintain permanent positions, and would not generate effective combat power. Some elements that Skibitsky mentioned—such as Russian elements in Syria and Nagorno Karabakh—reportedly already deployed to Ukraine several months ago, and these figures may be distorted. Russian authorities remain unlikely to generate substantial combat power for deployment into Ukraine.[71]

Russian federal subjects (regions) are continuing to recruit and deploy volunteer battalions to Ukraine. Russian daily newspaper Kommersant reported on September 2 that the Nizhny Novgorod-based “Kuzma Minin” tank battalion is deploying to Ukraine in pieces, a report consistent with ISW’s previous assessment that some volunteer battalions are deploying elements without their full complement.[72] Kommersant reported that the ”Kuzma Minin” tank battalion generated about 400 volunteers, a dramatic increase from a previous August 16 report stating that the unit only generated 30 out of 160 desired recruits.[73] It is unlikely the battalion’s recruitment rate dramatically increased by that margin in two weeks, and Nizhny Novgorod authorities may be intentionally inflating or misrepresenting recruitment numbers. The Russian-appointed governor of occupied Crimea, Sergey Aksyonov, stated on September 2 that over 1,200 Crimean volunteers are fighting in Ukraine, the first public Russian statement about Crimean volunteer soldiers.[74] It is unclear what formations these volunteer soldiers are fighting in. Aksyonov claimed that an additional 100 Crimeans will deploy to the frontlines in Ukraine by September 12.[75]

Russian force generation efforts are placing additional financial strain on Russian federal subjects. Russian Oryol City officials approved adjustments to the Oryol City budget to allocate 6.2 million rubles (approximately $103,000) to the “special military operations” in the “shortest time possible.”[76] The Oryol Oblast budget previously allocated only 2 million rubles (approximately $33,000) for the war.[77] Deputy Mayor of Oryol City Aleksei Stepanov stated that 41 Oryol residents have enlisted into the 3rd Army Corps after Oryol Oblast had previously introduced a one-time bonus of 100,000 rubles for those who enlist with the 3rd Army Corps, in addition to the standard enlistment bonus of 200,000 rubles.[78] 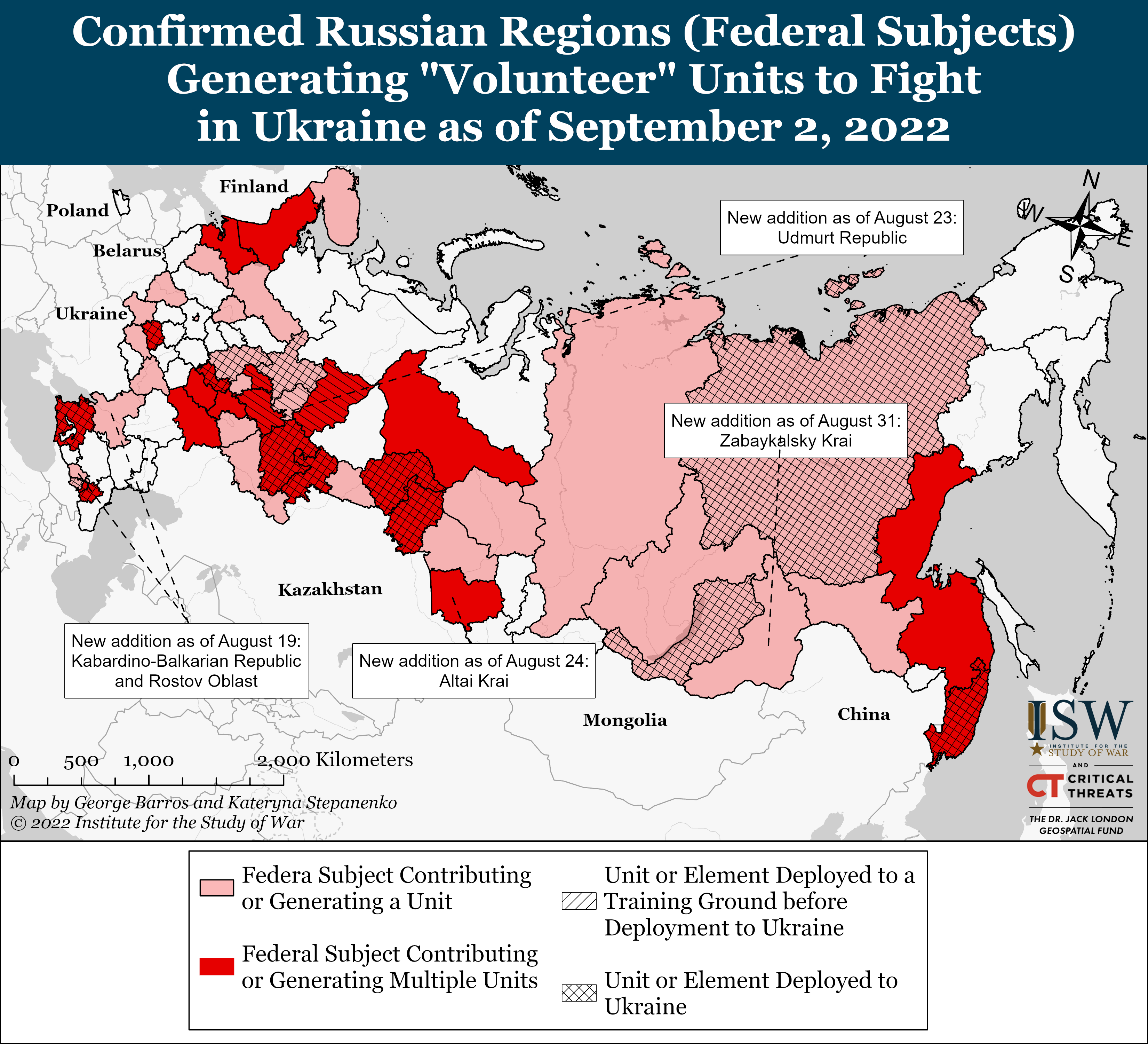