Ukrainian officials directly stated on September 3 that the ongoing Ukrainian counteroffensive in southern Ukraine is an intentionally methodical operation to degrade Russian forces and logistics, rather than one aimed at immediately recapturing large swathes of territory. Ukrainian Presidential Advisor Oleksiy Arestovych told the Wall Street Journal on September 3 that the current goal of Ukrainian forces in the south is the “systemic grinding of Putin’s army and that Ukrainian troops are slowly and systematically uncovering and destroying Russia’s operational logistical supply system with artillery and precision weapon strikes.[1] Arestovych’s statement echoes ISW’s assessment that the ongoing counteroffensive will likely not result in immediate gains and that Ukrainian forces seek to disrupt key logistics nodes that support Russian operations in the south and chip away at Russian military capabilities.[2]

The Kremlin could intensify its efforts to promote self-censorship among Russian milbloggers and war correspondents who cover the war in Ukraine. Russian authorities arrested and later released prominent Russian milblogger Semyon Pegov (employed by Telegram channel WarGonzo) in Moscow on September 2, due to what WarGonzo described as Pegov drunkenly threatening a hotel administrator.[3] Pegov is an experienced military journalist and WarGonzo has extensive links to the Russian military and access to Russian military operations in Donbas in 2014, Syria in 2015, and Ukraine in 2022.[4] ISW continues to track anomalous activity regarding Russia's milbloggers. We cannot confirm the circumstances of Pegov’s arrest, but WarGonzo’s explanation may be correct.

However, ISW previously assessed in July that the Kremlin seeks to promote self-censorship among milbloggers who have undermined Kremlin efforts to portray the war in Ukraine as a decisive Russian victory, and the Kremlin may seek to amplify this censorship. Russian military bloggers have candidly reported on Russian forces‘ poor performance in Ukraine and have discussed how the Kremlin has attempted to censor their coverage in Ukraine.[5] Prominent milblogger Rybar noted that the relationship between the Russian military command and war correspondents particularly soured after Russian President Vladimir Putin met with war correspondents during the St. Petersburg Economic Forum on June 17, during which Putin likely tried to defuse milbloggers’ discontent.[6] The Kremlin later likely intensified efforts to promote self-censorship among milbloggers by using a leaked letter from mothers of Russian soldiers who demanded the ban of journalist activity on the frontlines in July.[7]

Social media footage from residents of Kherson Oblast provides visual evidence of Ukrainian strikes in western and central Kherson Oblast. Geolocated footage shows the aftermath of a Ukrainian strike on the “Lost World” hotel and sports complex in Kherson City on September 3.[15] Ukrainian sources claimed that the complex belonged to the Russian-backed head of the Kherson occupation administration, Volodymyr Saldo.[16] The Ukrainian General Staff noted on September 2 that the Russian company that was based in the ”Lost World” sports complex previously looted the property and fled to occupied Crimea.[17] Elements of the Russian-backed occupation regime likely used the ”Lost World” complex as some sort of headquarters. Local residents additionally posted footage of the aftermath of a Ukrainian strike on a Russian ammunition depot in Oleshky, about 8km southeast of Kherson City across the Dnipro River.[18] Geolocated footage also shows a destroyed Russian Pantsir-S1 air defense system in Oleshky.[19] Social media footage of explosions in Nova Kakhovka (55km east of Kherson City) supports satellite imagery from September 2 depicting that the Nova Khakovka dam bridge has partially collapsed due to Ukrainian strikes.[20] The satellite imagery shows a roughly 20m-by-9m segment of the bridge has fallen into the river, which has likely rendered this section of the dam bridge inoperable (see below image).[21] 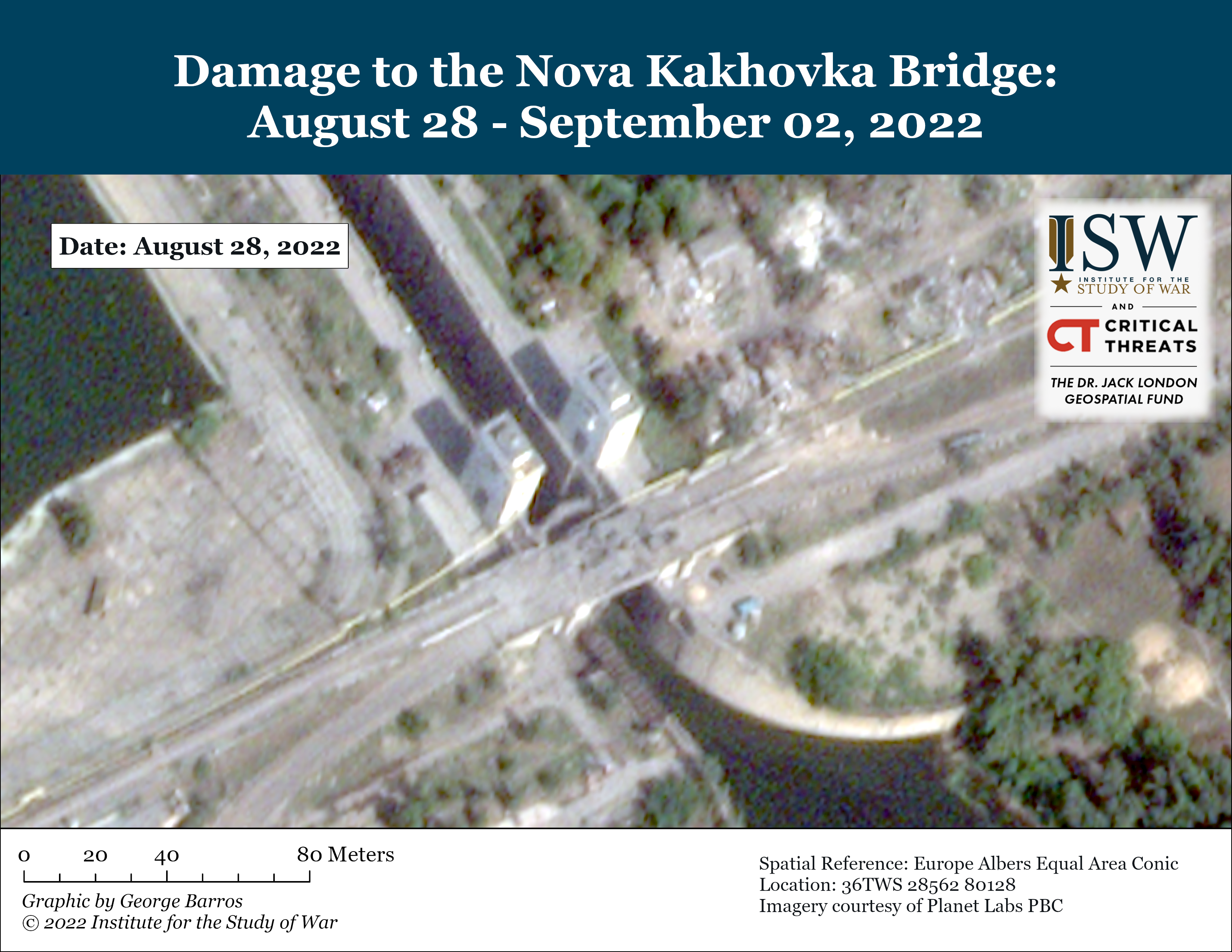 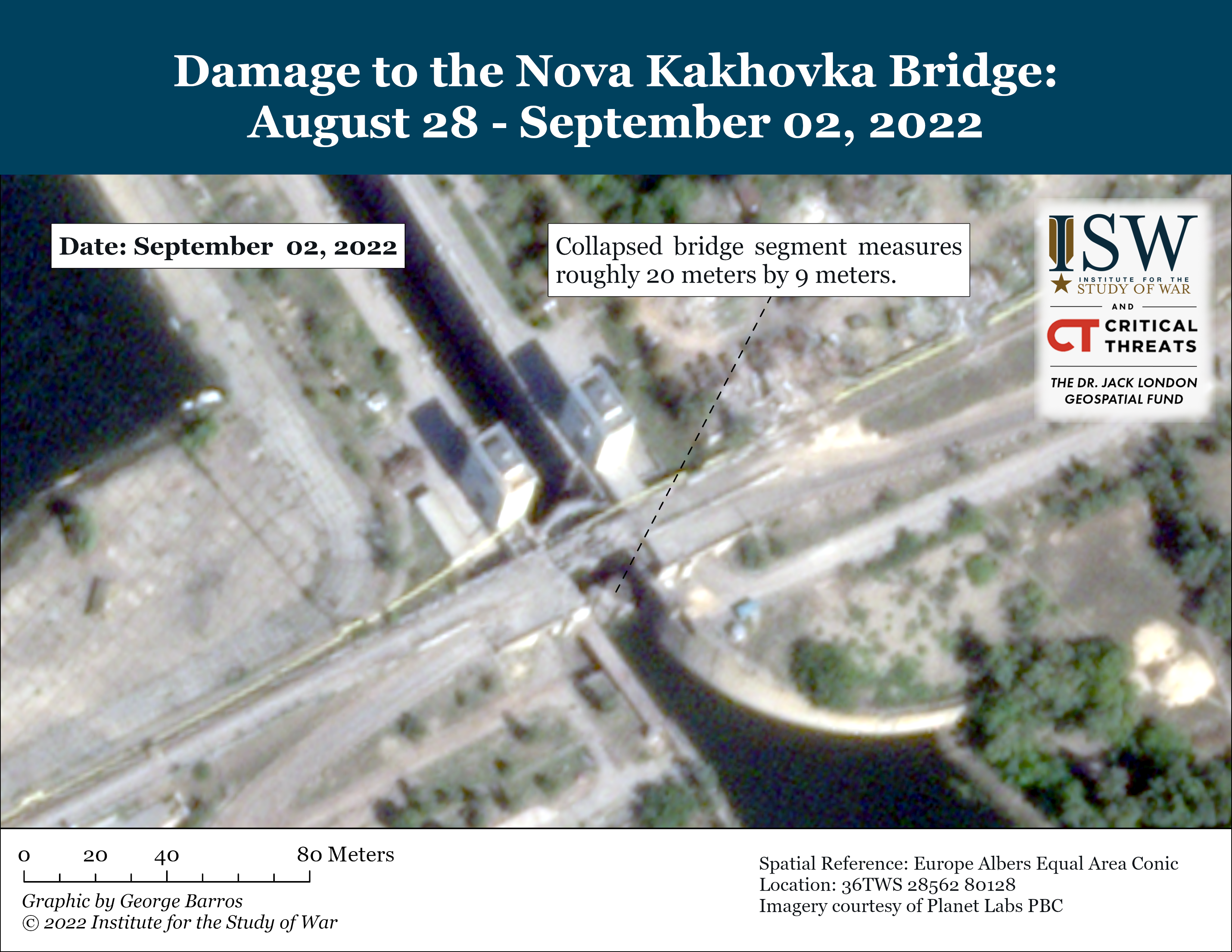 Russian milbloggers claimed that Ukrainian forces are fighting in three distinct directions as of September 3—northwest of Kherson City along the Kherson-Mykolaiv Oblast border; in western Kherson Oblast near the Inhulets River along the Kherson-Mykolaiv border; and in northern Kherson Oblast south of the Dnipropetrovsk Oblast border.[22] ISW cannot independently confirm whether Ukrainian forces are fighting in these areas.

Russian forces did not conduct any confirmed ground attacks southwest of Donetsk City or in eastern Zaporizhia Oblast on September 3 and continued routine artillery strikes in these areas.[40] 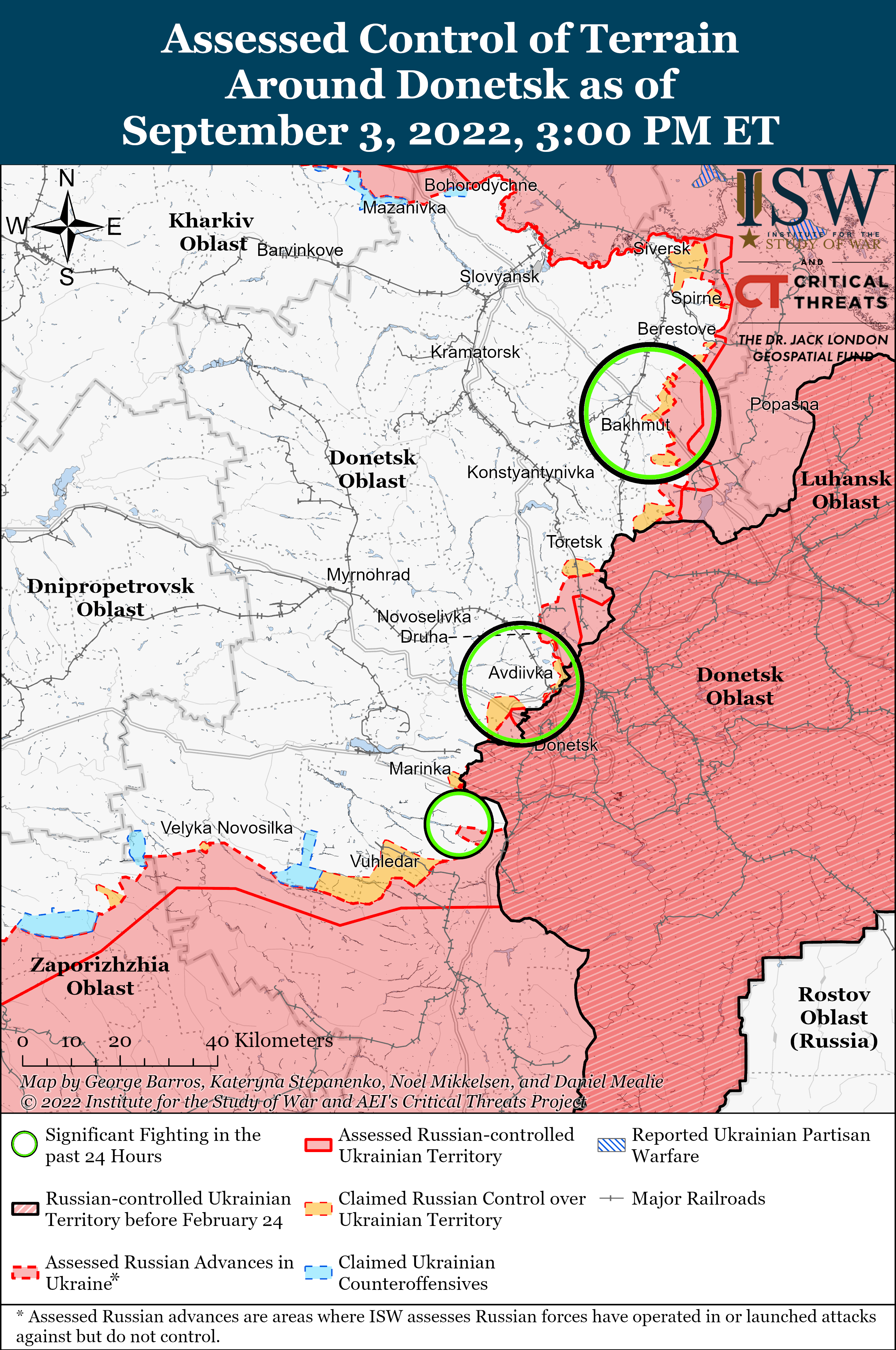 Russian forces did not conduct any confirmed ground attacks in northeastern Kharkiv Oblast on September 3 and continued routine shelling of Kharkiv City and surrounding areas.[41] 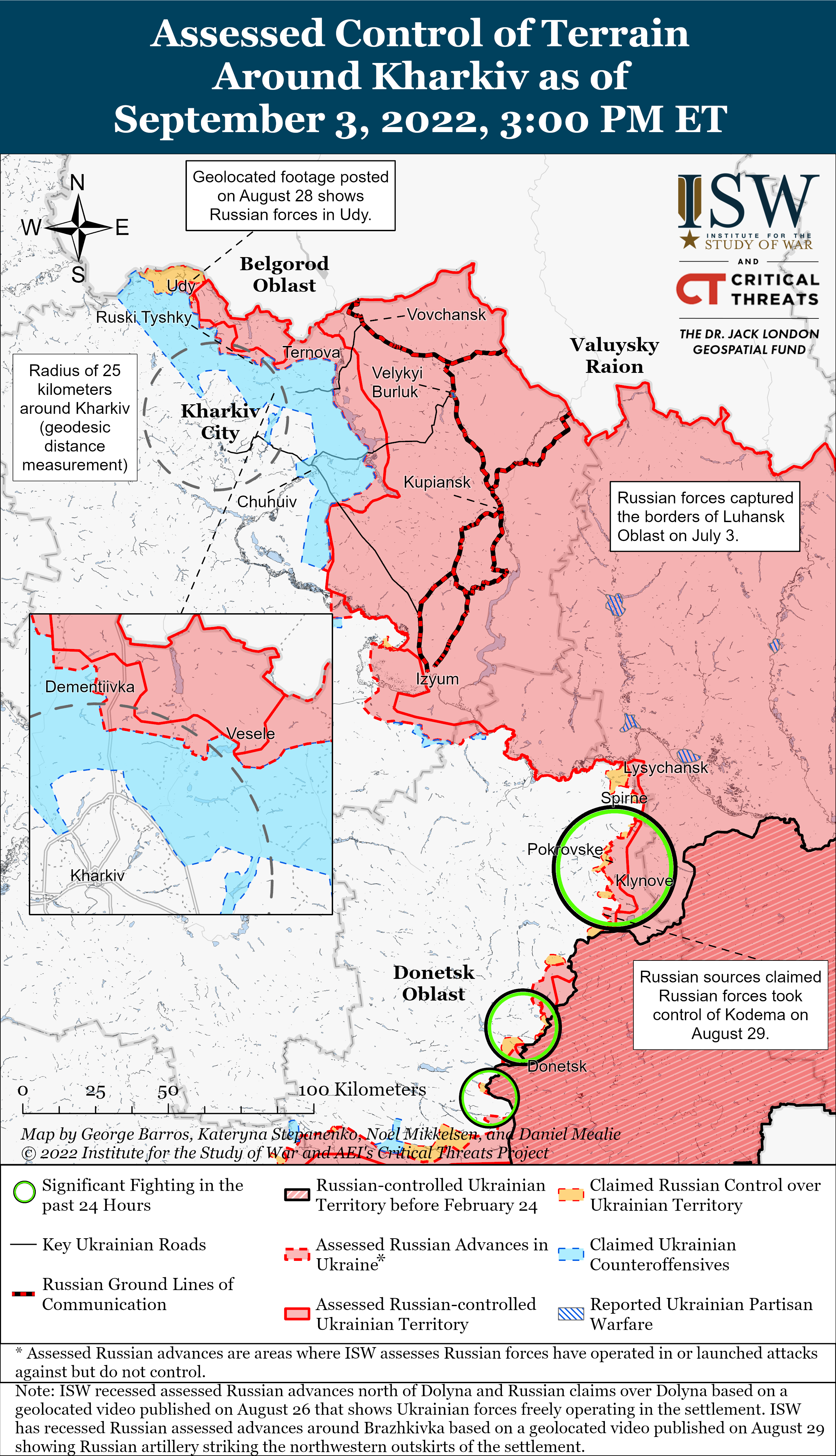 Russian forces did not conduct any confirmed ground assaults along the frontline in Zaporizhia Oblast, west of Hulyaipole, and continued routine shelling along the line of contact on September 3.[42] The Russian Defense Ministry (MoD) claimed that Russian forces struck a Ukrainian ammunition depot in Orikhiv, roughly 64km southeast of Zaporizhzhia City.[43]

Ukrainian forces are likely conducting localized attacks along the line of contact west of Hulyaipole to disrupt Russian force deployments. The Ukrainian General Staff reported that Ukrainian forces are attacking Russian forces’ positions via unspecified means and in unspecified locations along the frontline.[44] The current Ukrainian policy of operational silence about counteroffensive actions in Kherson Oblast may be limiting Ukrainian reporting about offensive actions along the Zaporizhia Oblast frontline as well. A Russian source reported that Ukrainian forces have conducted daily reconnaissance-in-force operations against Russian positions in Nesteryanka (10km southwest of Orikhiv) since August 31 and are heavily shelling the surrounding area, but ISW cannot confirm these reports.[45] Ukrainian forces struck the Melitopol airfield again on September 3.[46]

The Russian MoD claimed (likely falsely) that Ukrainian forces attempted to storm the Zaporizhzhia Nuclear Power Plant (ZNPP) for the second time on September 2.[47] The Russian MoD claimed that 250 Ukrainian special forces and foreign personnel attempted to land at positions near Enerhodar but that Russian aviation and artillery pushed back the Ukrainian forces to the north bank of the Kakhovka reservoir.[48] Russian sources also published an interview of a Russian soldier and pictures of a drone and warhead as evidence of Ukrainian attacks on the ZNPP, but such evidence is inconclusive and easily staged.[49] Ukrainian forces remain unlikely to launch a tactical and unsupported attack against the ZNPP, and Russian forces are likely stepping up information operations to portray Ukrainian threats to the nuclear plant. Russian officials and milbloggers amplified claims on September 3 that Ukrainian forces are preparing for chemical or biological attacks in Ukraine alongside the claims of Ukrainian attacks on the ZNPP.[50] Russian war correspondent Rostislav Zhuravlev reported that RIA Novosti provided its journalists with gas masks a month prior in case of a chemical attack.[51] The Kremlin is likely presenting these narratives of nuclear and biochemical provocations in southern Ukraine together to try to degrade Western trust and aid to Ukraine. 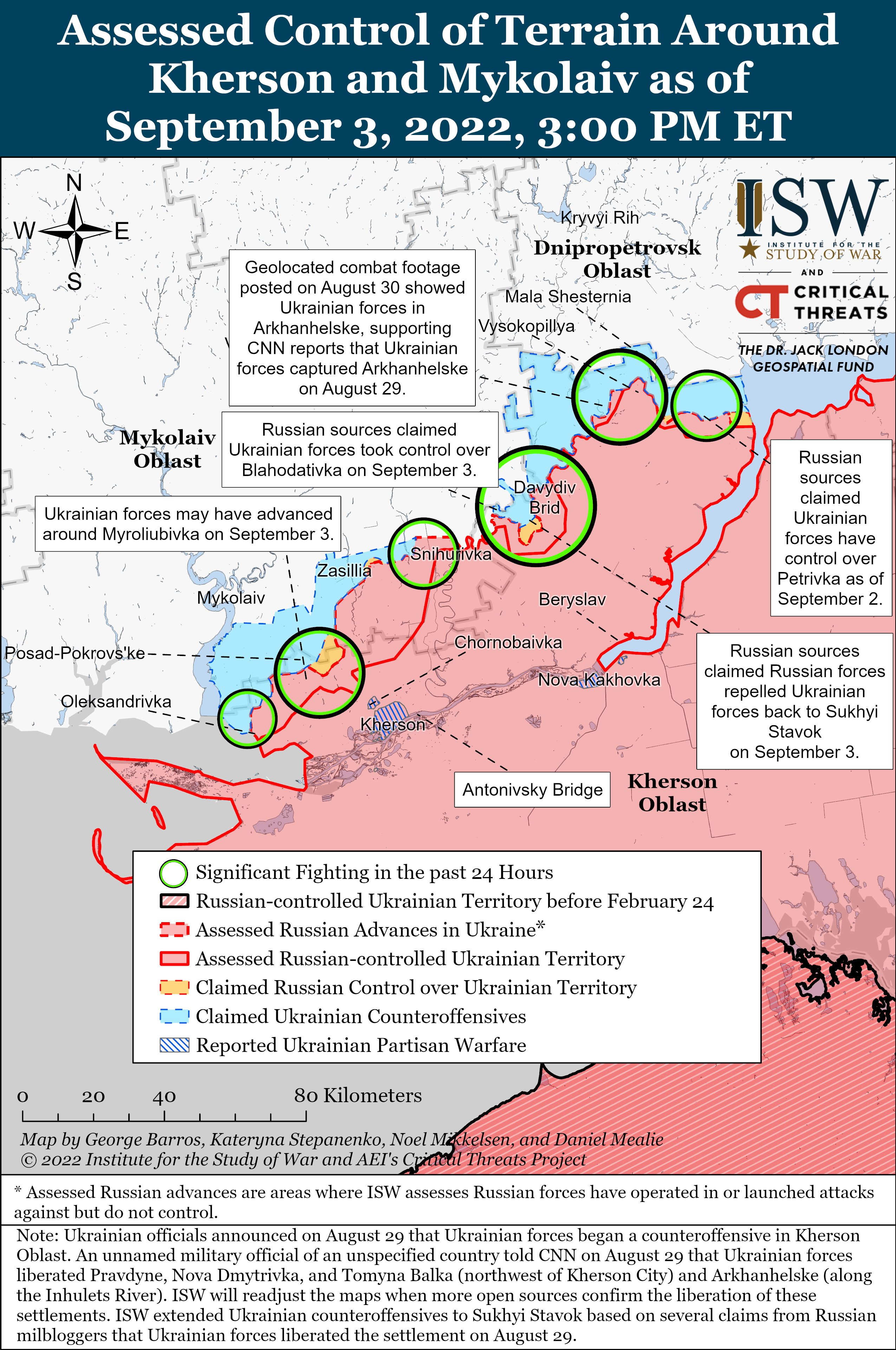 Russian authorities are reportedly increasingly recruiting employees of Russian state-owned entities for “volunteer” military service in Ukraine. The Ukrainian General Staff reported on August 3 that the Kremlin provided new unspecified norms to Russian state companies to facilitate the selection of “volunteers” and ordered the Russian Railways company to generate up to 10,000 new candidates for short-term military service contracts among its civilian employees.[56] These efforts represent further attempts by Russian authorities to use existing structures to pressure Russians into signing short-term contracts without having to carry out general mobilization.

Ukrainian special forces are reportedly increasingly able to conduct minor raids across the border into Russia, possibly disrupting Russian logistics and forcing Russian forces to redeploy to secure the border. Social media footage on September 2 depicted a Ukrainian raid into Russia from Sumy Oblast, Ukraine, to lay mines and destroy an MDK-3 trench digger.[62] One post claimed that Ukrainian forces can “come and go as they please” across the border, though this is almost certainly an exaggeration and Ukrainian cross-border raids likely remain limited.[63] Western news outlets first reported in late June that Ukrainian special forces began conducting operations in Russian territory.[64] 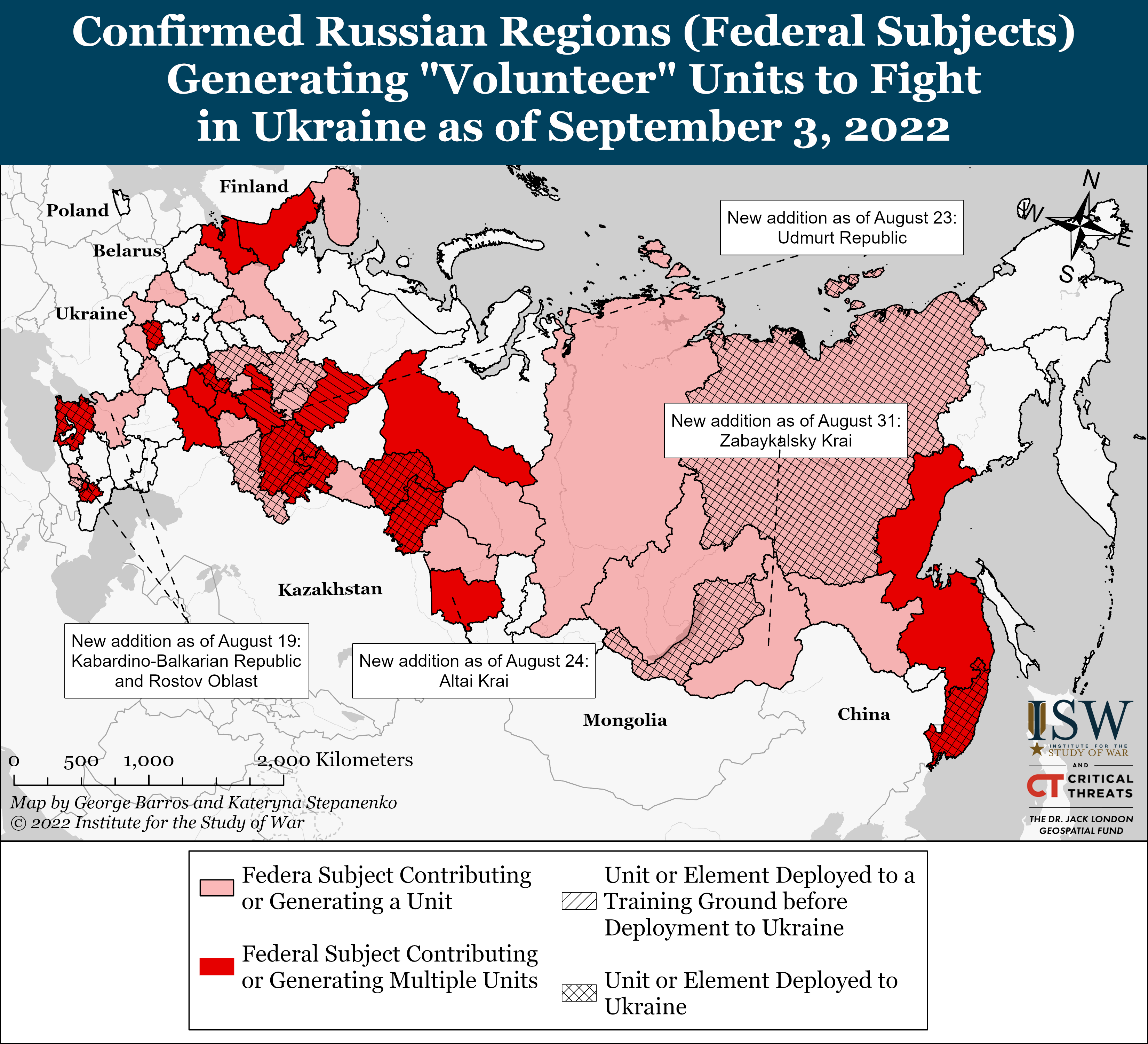 Administration officials in Russian proxy republics continue to struggle with the provision of basic administrative necessities in occupied areas. Donetsk People’s Republic (DNR) Head Denis Pushilin fired an inspector and severely reprimanded the head of Kirovskyi District in Donetsk City on September 3 due to their failure to solve ongoing water supply problems in Kirovskyi District.[65]  DNR authorities have previously blamed Ukrainian shelling for damaging or cutting power to water filtration plants.[66] Russian and proxy authorities have faced repeated difficulties supplying water to occupied Ukrainian territory, but the degradation of water supplies in Donetsk City itself, which Russian forces have occupied for eight years, indicates mounting challenges.

Russian occupation authorities are continuing to prepare for annexation referenda. Ukrainian Kherson Oblast Head Yaroslav Yanushevich stated that occupation authorities are going door-to-door in residential areas in Velyka Lepetykha, Kherson Oblast (on the left bank of the Dnipro River), and forcing civilians to fill out questionnaires to obtain a Russian passport.[67] Russian authorities can use civilian data to monitor dissent and coerce cooperation with the occupation governments.[68] The occupation Election Commission of Zaporizhia Oblast announced that it received samples of voting equipment, including voting booths and transparent ballot boxes, to further prepare for the Zaporizhia Oblast annexation referendum.[69]  Russian occupation authorities are however unlikely to be able to carry out large-scale referenda despite ongoing preparations, as ISW has previously assessed.[70]