The Russian Federation has launched a large-scale drive to form volunteer battalions in the 85 “federal subjects” (or regions) that comprise the federation. Recruiting for some volunteer battalions began in June but has intensified in July, with new volunteer units being reported daily. The battalions apparently will consist of roughly 400 men each aged between 18 and 60. They will belong to various branches of service including motorized rifle, tank, and naval infantry, but also signals and logistics. Recruits are not required to have prior military service and will undergo only 30 days of training before deployment to Ukraine.

This recruitment effort will likely be expensive if it comes close to meeting its targets. It appears that the Russian Ministry of Defense will pay the volunteers’ salaries while the “federal subjects” will pay their enlistment bonuses. Salaries generally start at roughly $3,000 per month per soldier or about $1.2 million per month per 400-man unit. Enlistment bonuses offered by at least some units appear to be roughly a month’s salary. If the effort generates 85 battalions each of 400 men it would bring an additional 34,000 volunteers into the fight at the cost of about $102 million per month in salary alone. Considering that the 30 days of training the volunteers will receive before entering combat will not produce combat-ready soldiers, that price is very high. The volunteers will receive veteran status and benefits if they serve in Ukraine, moreover, in addition to their salaries and bonuses, a commitment that will add to the Russian Federation budget for decades.

This drive will likely produce “soldiers” of lower quality than the normal conscripts in the Russian army at close to professional-soldier prices.  It is a remarkable expedient that suggests that Russian President Vladimir Putin remains unwilling to compel his people to fight and unable to attract them to fight voluntarily without considerable incentives.

This report will be expanded and updated as new data becomes available. 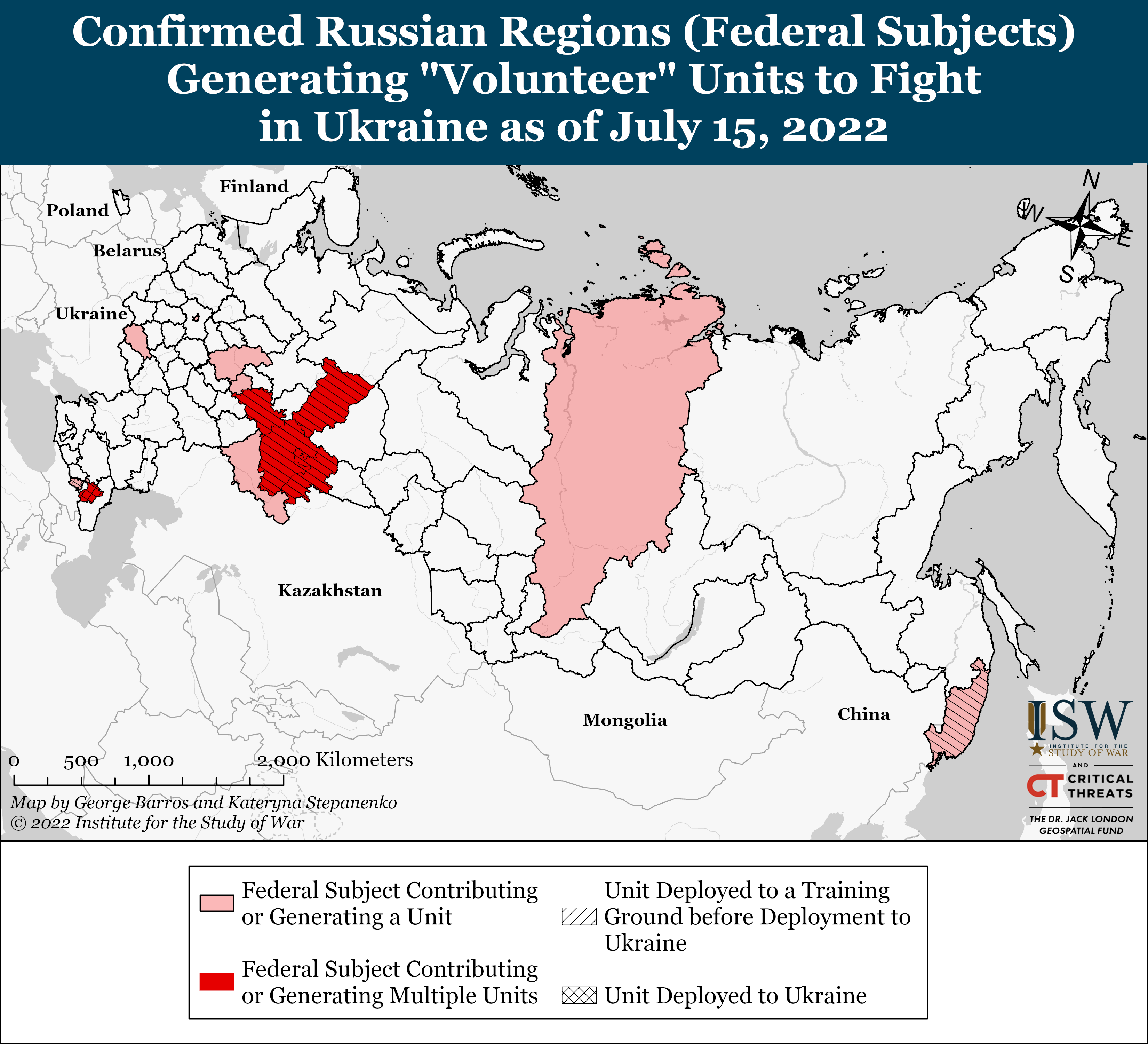 “Tigr” Battalion (Naval Infantry, part of 155th Separate Naval Infantry Brigade): Russian outlets reported that “Tigr” is recruiting volunteers with or without military experience ages 18 to 60, on July 9, but it is unclear when the recruitment drive begun in Primorsky Krai.[1] The governor of Primorsky Krai reported that the battalion is enrolling only residents of the krai and has the highest number of registered volunteers of any federal subject in Russia.[2] “Tigr“ will undergo a 30-day, two-stage training period with officers of the 155th Separate Naval Infantry Brigade at the Bamburovo and Gornostay Training Grounds and will replenish the naval infantry brigade.[3] Social media videos show that some servicemen are already exercising at an unspecified training ground, but it is unclear if ”Tigr” has formally deployed for its 30-day training period.[4] Distinguished servicemen in the unit will receive a 50,000-ruble bonus ($860) after two weeks of training, and all servicemen will receive a 150,000-ruble payment ($2,575) after completing the training. Funds will be drawn from the Primorsky Krai budget.[5] “Tigr” servicemen will receive a monthly salary of 200,000 rubles ($3,430) and veteran status. Social media users noted that footage of the “Tigr” battalion shows that the recruits are older than traditional military age and are likely in their 50s to 60s.[6]

“Seym” Battalion (logistics): The “Seym” Battalion is a volunteer logistical support battalion that began recruiting volunteers on July 11.[7] The Kursk Oblast Administration announced that the battalion will focus on transporting fuel, food, ammunition, with servicemen up to 60 years of age receiving monthly salaries of 200,000 to 500,000 rubles ($3,430 to $8,580) depending on the time spent at the frontlines.[8]

“Sobyaninskiy Polk” Regiment: Moscow officials began recruitment for the newly-established “Sobyaninskiy Polk” regiment on July 1 and are offering over 200,000 rubles per month (approximately $3,400) to volunteers drawn from the Moscow City budget.[9] Russian opposition outlet Meduza noted that most of the volunteers came from regions other than Moscow City as of July 13. Meduza stated that former commander of the Donetsk People’s Republic (DNR) Militia Roman Vysotsky is one of the recruiters for “Sobyaninskiy Polk,” but it is unclear if the regiment will merge with DNR forces. The “Sobyaninskiy Polk” volunteers (up to 60 years of age) will undergo training at the Mulino Training Ground in Nizhny Novgorod Oblast before deploying to Ukraine.

“Alga” Battalion: The Republic of Tatarstan created a joint Telegram channel to recruit for the “Alga” and “Timer” Battalions on June 23, but had likely already begun the recruitment drive as the unit reportedly had 300 registered volunteers on June 24.[10] The official recruitment channel claimed that the republic had recruited over 500 volunteers for the “Alga” Battalion on July 1even though the original recruitment target had been 400.[11] The Republic of Tatarstan dispatched the “Alga” volunteer battalion for a month-long training program in Orenburg Oblast on July 8.[12] The battalion will then deploy to Nizhny Novgorod Oblast where they will receive their combat assignments before entering Ukraine.[13] The Republic of Tatarstan will pay servicemen 3,000 rubles (approximately $53) per day in addition to a one-time 260,000 ruble payment (approximately $4,450) for enlisting drawn from the republic’s budget.[14] Republic of Tatarstan also offered an additional 8,000 rubles (approximately $140) per day spent in combat, but it is unclear if the Republic or Russian Defense Ministry will sponsor the payment. The Russian Defense Ministry will reportedly pay servicemen a starting monthly salary of 150,000 rubles (approximately $2,600).[15]

“Timer” Battalion: The Republic of Tatarstan is forming the “Timer” Battalion as of July 1, and 300 to 350 men had already passed the selection process by that date.[16] The battalion will reportedly have over 400 volunteers.

“Yaik” Battalion (motorized rifle battalion): Orenburg City officials announced the establishment of the “Yaik” volunteer motorized rifle battalion on July 8.[17] Any Orenburg Oblast men ages 18 to 50 can enlist, and a military commission will certify the health and clean criminal record of volunteers. Servicemen will receive a salary of 200,000 rubles ($3,430) for serving in Donbas.[18]

“Zapad Akhmat” Battalion: Chechen leader Ramzan Kadyrov announced on June 26 that Chechen forces formed a West-Akhmat battalion “in the shortest possible” time and claimed that the unit would deploy to a well-equipped base in Chechnya. The unit is subordinate to the Russian Southern Military District.  Its commander is Islaim Aguev.[23]

“Yug Akhmat” Battalion: Chechen leader Ramzan Kadyrov announced the formation of “Yug Akhmat” on June 26, but did not provide any additional details.[24]

“Sever Akhmat” Battalion: Chechen leader Ramzan Kadyrov announced the formation of “Sever Akhmat” on June 26, but did not provide any additional details.[25]

“Shaimuratov” Battalion:  The Russian organization “Veterans of the Marine Corps and Special Forces of the Navy” announced the creation of the battalion at the end of May and noted that servicemen will receive a month of training in Orenburg Oblast before deploying to Ukraine. Some pro-Kremlin media outlets announced the deployment of a new volunteer battalion from the Republic of Bashkortostan to Donbas on July 6, while some sources claimed that the battalion arrived in Orenburg for training.[26] The battalion had reportedly arrived in Alkino, Republic of Bashkortostan, on July 2.[27] The Republic of Bashkortostan recruitment Telegram channel reported that the ”Shaimuratov” Battalion had registered 250 volunteers as of June 16 and is seeking to recruit a total of 800 volunteers split between two battalions.[28] The Republic of Bashkortostan and the Russian Defense Ministry financially incentivized servicemen by offering 200,000 rubles ($3,430) for signing the military contract and 2,000 rubles ($34) for every day served, but it is unclear whether this payment refers to service in a combat zone. Volunteers will reportedly receive monthly salaries of 220,000 rubles ($3,775).[29]

“Uzhnouralets” Battalion: Governor of Chelyabinsk Oblast Alexei Teksler announced on July 13 that the region has been forming two battalions as part of the Central Military District: “Uzhnouralets” and “Uzhnyi Ural.[34] The region held a departure ceremony for 82 servicemen of the battalion that deployed to the training ground in Nizhny Norgorod on July 15.[35] First Deputy Regional Minister of Public Security Vladimir Gusak said that ”Uzhnouralets” has in total 263 volunteers, including the recently deployed servicemen. Local news reports said that the youngest serviceman is 21 and the oldest 54.[36]