Prior to the launch of Operation Fardh al-Qanoon in February 2007, the neighborhoods of Adhamiyah, Shaab, and Ur were some of the most dangerous in Baghdad.

The working-class Adhamiyah neighborhood is located along the Tigris River on the western edge of the district. It remains the main Sunni enclave in predominantly Shi’a eastern Baghdad.  It had traditionally been home to Sunni Arabs, many of whom supported Saddam Hussein’s regime and remain hostile to current the Shi’a-led government. The Sunni neighborhoods of Adhamiyah and nearby Waziriya are almost completely surrounded by Shi’a-dominated areas.  After the Samarra mosque bombing in February 2006, Shi’a death squads began to enter the Adhamiyah neighborhood, perpetrating kidnapping and execution style killings.  In response, many Sunni residents turned to al-Qaeda in Iraq for protection. Consequently, the Adhamiyah neighborhood became an al-Qaeda stronghold.

The security dynamics in the Shaab and Ur neighborhoods, on the eastern edge of the district, were also destabilizing. Shaab is a poor and working-class neighborhood that is predominantly Shi’a Muslim; Ur, a former mixed neighborhood, is also now predominantly Shi’a.  The close proximity of these two neighborhoods to Sadr City has meant a heavy Shi’a influence in eastern Adhamiyah District. In the months following the February 2006 Samarra mosque bombing, Sunnis in the neighborhoods of Shaab and Ur were targets of forced displacements and execution style killings by Shi’a militia groups, namely Jaysh al-Mahdi (JAM). The large Shi’a communities of Shaab and Ur have also been targets for Sunni insurgent attacks.

Under the Baghdad Security Plan, Coalition and Iraqi forces launched a series of operations aimed at restoring security to the Adhamiyah district. In February 2007, when Operation Fardh al-Qanoon was launched, two battalions from the 3rd Stryker Brigade, 2nd Infantry Division moved into the Adhamiyah security district to begin a major security and clearing offensive in the area. The Adhamiyah, Shaab and Ur neighborhoods were the primary targets for clearing operations; and securing the district has remained a priority for Coalition and Iraqi forces.

Security in the Adhamiyah district has improved in recent months. Coalition and Iraqi forces have targeted both Sunni and Shi’a violent elements in the district via a heightened presence and ongoing operations. The establishment of Sons of Iraq groups in Adhamiyah has indeed been a key factor for improving stability and security in the neighborhood. Moreover, the targeting of Shi’a militias and Iranian-backed Special Groups in 2008 also helped reduce sectarian violence in the district. Despite the uptick in Special Groups activity in early 2008, Coalition and Iraqi operations in nearby Sadr City  as well as in Shaab and Ur have reduced the Shi'a militia and Special Group threat.

Still, obstacles still remain for U.S. and Iraqi forces in the Adhamiyah security district. Elements of al-Qaeda in Iraq and the Sunni insurgency persist in the Adhamiyah neighborhood, attempting to reinfiltrate their former stronghold. While the influence of criminal militias has also dwindled, Shi’a militias and Iranian-backed Special Groups remain active in the eastern neighborhoods of Shaab, Ur, and Beida. 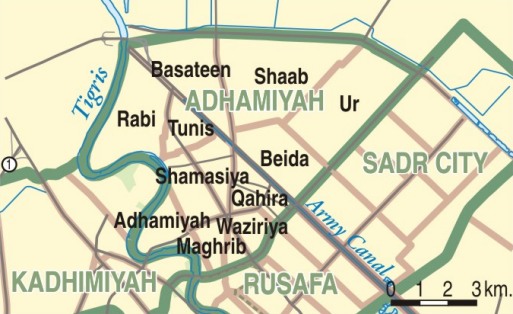