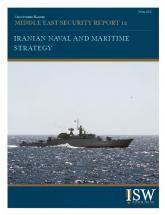 The Iranian regime has among its strategic objectives expanding its power in the Middle East and rolling back U.S. influence in the region. Iranian leadership considers the Persian Gulf and much of Central Asia to be a “near abroad” where Iranian culture and interests should have significant influence. Recent developments confirm that Iran is committed to this ambition, has a strategy to realize this outcome, and is making significant progress towards it. Iran also clearly has ambitions to be a significant and relevant actor on the global stage, whose capabilities and intentions must be taken into consideration by superpower nations.

Iran’s maritime forces, the Islamic Republic of Iran Navy (IRIN) and the Islamic Revolutionary Guards Corps Navy (IRGCN), as well as its commercial shipping fleet, the Islamic Republic of Iran Shipping Lines (IRISL), are being used in specific, definable ways to further Iran’s strategic objectives. In the recent past, Iran has decreased the size, scope, and geographic reach of several of its maritime exercises. Considered in isolation, a reduction in maritime exercises might appear to be evidence that Iran’s maritime capability is in decline, or that it does not have adequate resources to execute maritime operations in support of its strategic objectives.

A holistic view of the evidence, however, reveals that at the same time Iran has reduced the size, scope and reach of its local maritime exercises, it has also taken three distinct actions that reflect its broad, strategic ambitions. First, Iran has reprioritized some of its local maritime exercises towards solidifying or expanding territorial claims in the Persian Gulf, Strait of Hormuz, and Caspian Sea. Second, IRIN has significantly increased its long-range deployments in support of strategic relationships with key partners. Third, at the same time that IRISL is being used to support Iranian objectives logistically, IRIN may also be conducting similar operations. Taken as a whole, these three trends indicate Iran is modifying and expanding its maritime activities in support of strategic objectives.

Iran has physical control over the Persian Gulf islands of Abu Musa, Greater Tunb, and Lesser Tunb. These islands are strategically located just outside the Strait of Hormuz, in the Persian Gulf. Although the United Arab Emirates (UAE) claims legal ownership of the islands, the physical possession of the islands is not in dispute — Iran has military garrisons and commercial ventures in place on each of these islands. By conducting short range exercises that highlight control over the disputed islands, Iran hopes to solidify its legal claim to the islands, as well as highlight its military capability to potential enemies. Iranian claims to the disputed islands also factor into legal claims that it should control access to the Strait of Hormuz.

Iran has an existing relationship with China that extends far behind the commercial aspect of China importing Iranian oil. China has exported significant military equipment to Iran, and provided key enabling technologies to the Iranian military industrial complex. IRIN deployments to China serve to solidify that existing relationship and expand it. By conducting long-range deployments to the Pacific, IRIN validates that it is a capable, reliable partner that China can trust.

Iran and Russia are partners in supporting the Assad regime in Syria, and they have common interests in the Caspian Sea and Caucasus region. At the same time IRIN is conducting long range deployments to the Pacific and solidifying Iran’s relationship with China, IRIN is increasing support to Russian Navy ships on long deployments. IRIN has made its base at Bandar Abbas available to the Russian Navy as a friendly and secure port where Russian Navy ships can refuel, resupply, and make repairs. This practice makes Russian Navy deployments from their Pacific Fleet homeport of Vladivostok to the Russian Navy Base at Tartus, Syria far more sustainable.

Sudan and Iran partner in the conveyance of Iranian military equipment bound for Iranian proxies or customers in the Mediterranean. The majority of weapons transfer from Iran to the Mediterranean takes place via smugglers, who use small, privately owned dhows to convey weapons and ammunition from Iran to the Sudan coast on the Red Sea, and from there via overland transfer to the Mediterranean. IRIN has been conducting recurrent port calls to Port Sudan that serve to strengthen the relationship between Iran and Sudan. These port calls may also be used to transfer weapons, ammunition, and other supplies directly from Iran to Sudan and vice versa.

The totality of evidence indicates that Iranian maritime activity in support of the Iranian strategic objective of regional power and influence is evolving and expanding, not contracting. The Iranian regime is not in decline, and it is not a state that is isolated from the international community. Iranian strategic ambition is expanding, and the Iranian regime is using its maritime entities, namely, IRIN, IRGCN, and IRISL, to realize that strategic ambition.