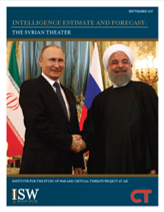 The combined research teams of the Institute for the Study of War (ISW) and AEI’s Critical Threats Project (CTP) authored this report.

The United States will continue to risk its vital strategic interests in the Middle East unless it changes its policies in Syria and Iraq. President Donald Trump and his administration inherited a weakened U.S. position, with Russia imposing constraints on American freedom of action and options. The Trump administration has taken initial steps to advance U.S. prestige in the region by reassuring America’s traditional allies and acting more firmly against its enemies and adversaries. The tactical tasks of recapturing Mosul and liberating Raqqa from the Islamic State of Iraq and al Sham (ISIS) are complete and nearly complete, respectively. Nevertheless, its efforts to define and execute policies that secure America’s vital interests are moving more slowly than those of America’s enemies, adversaries, and spoilers who are more agile than the U.S. These actors include Russia, Iran and its proxies, Turkey, ISIS, al Qaeda, and some Kurdish elements, who are pursuing goals that threaten American objectives and are exploiting the current situation to make strategic gains as the U.S. champions short-term gains and tactical success.

The Trump administration has not yet broken with its predecessor’s approach to the Middle East, particularly in Syria and Iraq. It has prioritized conducting counterterrorism operations against ISIS to recapture ISIS’s territory. American military forces have accelerated this campaign by relying on the most readily available local forces, including Kurdish forces in northern Syria that are aligned with terrorists targeting Turkey. The administration has eschewed a U.S. role in addressing the regional war’s underlying drivers, including the role of the Bashar al Assad regime in Syria and sectarianism in Iraq stoked by Iran. The main effort of the counter-ISIS fight must become preventing the organization from reconstituting and its rivals from inheriting its leadership of the Iraqi and global jihad. ISIS re-emerged from a defeated al Qaeda in Iraq and controlled Iraqi cities only three years after American troops departed in 2011.

The Trump administration has also acquiesced to an expanding Russian and Iranian ground campaign in Syria and a growing role for Iran inside Iraq. Its diplomatic efforts to end the wars have focused on the most expedient political outcomes shaped by dominant local and regional actors. It does not appear committed to shaping a long-term stabilization congruent with a wider set of American regional interests. The administration has expressed that it will confront and roll back Iran’s destabilizing campaign but has neither set the conditions for such a campaign nor undertaken sufficient policy action that will set conditions for such an outcome.

The Russo-Iranian coalition is exploiting the continuity in American strategy from President Obama to President Trump’s administration. It is now strengthening its grip in Syria while enabling the Assad regime to extend its positions. Vladimir Putin’s dependence on Iran for securing Russia’s most important interests in Syria – its airbase at Latakia and naval base at Tartous – will continue to ensure that he will remain intertwined in a deepening partnership with Tehran. The “de-escalation” agreements brokered in Syria will allow Russia to remain in the driver’s seat for shaping the overall political settlement. These agreements will also fail to prevent Iranian expansionism. Russian and Iran share the ambition to weaken and ultimately expel the U.S. from the region. They are continuing to position themselves to make that outcome a reality.

The Salafi-jihadist movement remains a long-term threat to the United States, in part because of the time and space the U.S. has ceded to al Qaeda and ISIS by remaining fixated on terrain. ISIS has lost territory but is not defeated. The anti-ISIS coalition is actually setting conditions that will enable ISIS to resurge, by leaving communities in Syria and Iraq vulnerable and core governance and political issues unresolved. Al Qaeda, a more serious long-term threat to the U.S., has used its freedom of operation to defeat competitors within the broader anti-Assad opposition. America’s growing alignment with the pro-regime coalition in Syria benefits al Qaeda by legitimizing its narrative, incentivizing al Qaeda to reaffirm Syria as its priority theater globally. An escalating regional conflict between Saudi Arabia and Iran also threatens to empower Salafi-jihadists and embolden Tehran by fueling the sectarian war from which both benefit.

The Iraqi Kurdish community’s planned referendum on independence has created conditions and competition that could result in increased violence and further regional instability. The referendum in Iraq will fuel further division within the broader ethnic Kurdish community that extends into Syria, Turkey, and Iran. Kurdish presence and control over non-Kurdish communities will likely result in Kurd-Arab tensions and potential conflict. Turkey’s ongoing escalation against the PKK and Iran’s increasingly aggressive campaign against the referendum will likely create additional flashpoints. Salafi-jihadists will be poised to exploit the ensuing violence and instability. This report does not discuss regional actors’ approaches to the Iraqi Kurdish referendum in depth, but it offers important context for the regional geo-political trends with which the referendum will take place.

American national security requires that the Trump administration pursue a strategy that helps constrain, contain, and ultimately roll back Russia and Iran; defeat Salafi-jihadists in ways that prevent their reconstitution; defend strategic allies and bolster partners; and facilitate the emergence of independent, representative, and unitary states in Syria and Iraq. The removal of the Assad regime remains a necessary condition to achieve a desirable outcome in Syria. The U.S. must apply meaningful pressure against the Assad-Russia-Iran axis and regain leverage over it rather than accommodate it. The U.S. is now accommodating its adversaries by signing onto various agreements that allow it to consolidate control. This axis not only destabilizes the region and perpetuates conflict, but it also fuels radicalization and strengthens jihadist forces through its policies. It is making it increasingly difficult for the U.S. to protect its own security and interests.