Western media inaccurately reported that the Iranian regime abolished its morality patrol on December 4.[1] The regime has not made such a concession. Western outlets misinterpreted remarks from Prosecutor General Mohammad Javad Montazeri on December 3. Montazeri noted in response to a journalist’s question that security forces have reduced morality patrols in recent months—a statement that some Western media has mistakenly framed as confirmation that the regime abolished the patrols.[2] Iranian state media later clarified that Montazeri was only acknowledging the reduced morality patrols rather than announcing an end to the program.[3] No other Iranian official has indicated that the regime has ended the patrol.

The regime could still offer limited concessions, such as relaxed veiling enforcement, to quell the ongoing protests. Montazeri stated on December 1 that Parliament and the Supreme Cultural Revolution Council will announce an opinion on the mandatory hijab law by December 16.[4]

Supreme Leader Ali Khamenei would likely view any such reform as temporary pragmatism to ensure regime survival. Khamenei has continually argued that the regime has not yet sufficiently ideologized the population, framing social indoctrination as the true solution to many of Iran’s problems.[5] Khamenei has popularized within regime discourse since 2019 the notion that the Islamic Republic has entered a new phase in which the government and society must reaffirm and strengthen their commitment to the state’s revolutionary and religious ideals.[6] The idea that the regime under Khamenei will relax policies such as mandatory veiling is fundamentally incompatible with his vision for the future.

Thirty neighborhood youth groups announced the formation of an umbrella organization—the Neighborhood Youth Alliance—on December 4.[7] The alliance stated that its objectives are ”to coordinate planning to advance the revolution to victory and also create the necessary infrastructure to manage the country’s affairs during the critical periods of the transition of power.” The alliance emphasized its support for a democratic government and universal human rights. The emergence of the Neighborhood Youth Alliance reflects the growing organization of parts of the protest movement and indicates the possible emergence of more centralized leadership.

At least nine protests took place in nine cities across seven provinces on December 4. Inclement weather conditions may have depressed turnout in northwest Iran. CTP assesses with moderate to high confidence that protests occurred in the following locations:

Note: CTP defines small protests as fewer than 100 individuals, medium protests as between 100 and 1,000, and large protests as over one thousand. 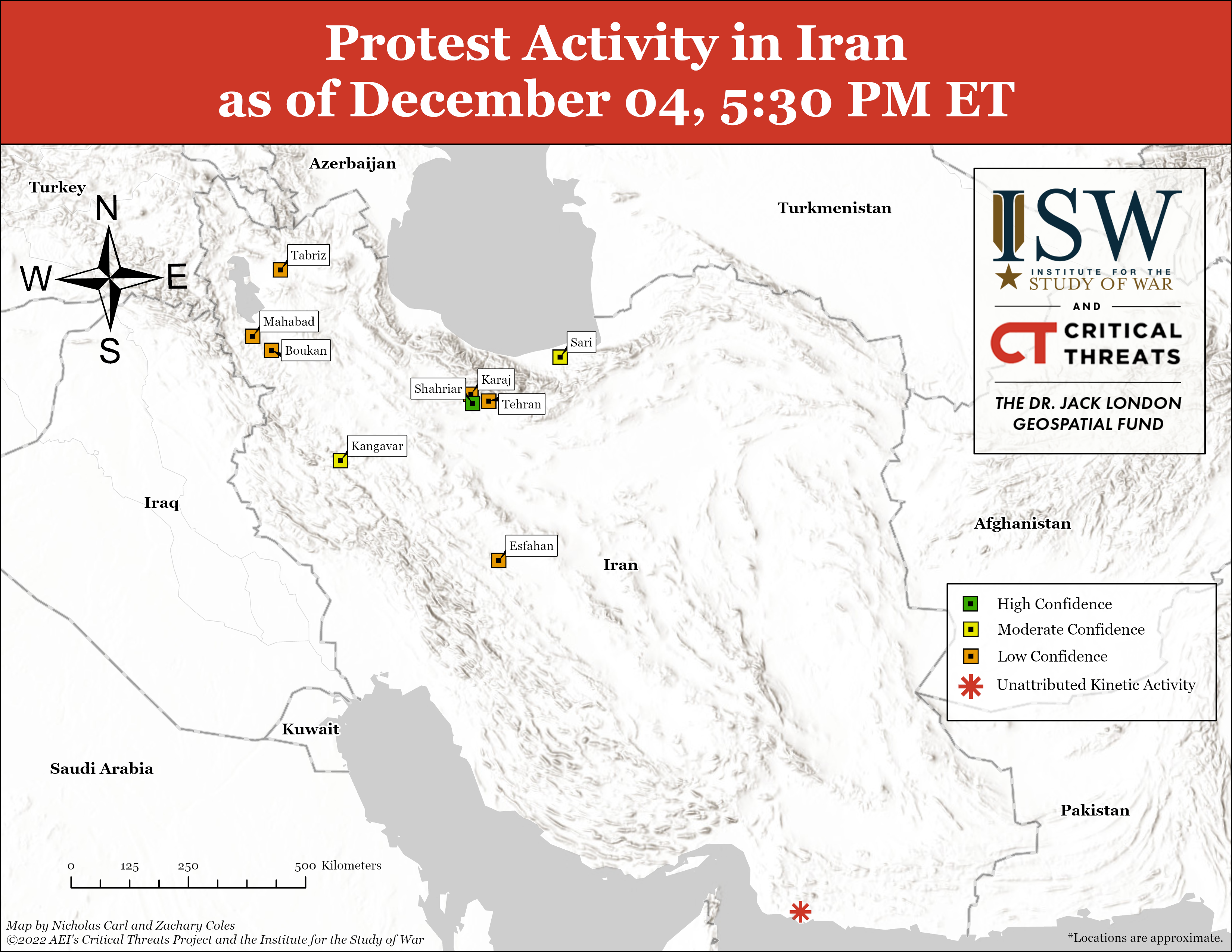 Supreme National Security Council Secretary Ali Shamkhani met with several prominent hardline, moderate, and reformist politicians on December 4 likely to discuss cooperation to quell the protests.[19] Shamkhani previously discussed implementing unspecified ”liberalizing measures” with reformist leaders, including members of the Khomeini and Rafsanjani families, in exchange for help ending the protests in late October, as CTP previously reported.[20] Iranian state media did not report pictures of these meetings, but these reports, if confirmed, would invalidate the rumors that Shamkhani left his position as Supreme National Security Council secretary.[21]

Deputy Interior Minister for Security Affairs Majid Mir Ahmadi tried to emphasize the economic consequences of the protests on December 4, possibly to fracture the protest movement.[22] Mir Ahmadi stated that the protests have caused around $47 million in damages—not including the economic data from Sistan and Baluchistan Province. Mir Ahmadi added that most protesters are employed and therefore not driven primarily by economic grievances. He also accused foreign enemies of stoking the protests to hurt the Iranian economy. The Interior Ministry may try to increasingly promote the narrative that the protests are not in the best interest of citizens with economic frustrations in order to divide the protest movement and reduce turnout.

The office of prominent Sunni cleric Moulana Abdol Hamid released a statement on December 4 trying to dissociate his criticism of the regime from Baloch separatistism.[23] The statement condemned Baloch separatism and reiterated support for the territorial integrity of Iran. The office of Abdol Hamid was responding to an individual who raised a Baloch nationalist flag during his Friday sermon on December 2.[24]

Likely Iranian-backed militants conducted a rocket attack on a Turkish military base in northern Iraq for the second consecutive day.[25] The militants fired five to eight rockets at the base but did not cause any casualties or damage.[26] Liwa Ahrar al Iraq—a front group with ties with Iranian proxy Kataib Hezbollah—claimed responsibility for the previous rocket attack on December 3 but has not claimed responsibility for the attack on December 4 at the time of this writing.[27]

Iraqi Prime Minister Mohammad Shia al Sudani instructed the Iraqi Border Guard to increase security along Iraq’s borders with Iran and Turkey on December 4.[28] Sudani approved the transfer of additional equipment and weapons to the Border Guard. Sudani is likely responding to Iranian demands to secure the border area and disarm Kurdish militant groups operating nearby, although it is unclear whether these latest Iraqi actions will address Iranian concerns.