Iranian protest organization groups may be reinforcing their organizational capabilities as protest activity entered a relative lull over the past several days. The Neighborhood Youth of Karaj issued a statement on November 26 suggesting that nation-wide calls for protests on November 24-26, which failed to significantly increase protest turnout, were poorly coordinated. The group stated that it had endorsed calls for protests on these dates but was not responsible for organizing them. Its statement suggested, in fact, that at least one such call that was attributed to it was a fake.

Calls for protests on November 24-26 suggested that protesters congregate in large crowds on pre-designated streets.[1] The advance notice would have likely provided security personnel with ample time to prepare, thereby increasing the risk to protest participants as CTP previously observed.[2] Calls for large crowds concentrated in a single location would have additionally decreased the effectiveness of the protests, as the scattered nature of anti-regime demonstrations has strained security forces’ limited bandwidth over the past several weeks. The Neighborhood Youth of Karaj‘s hints that unknown actors published a call for more dangerous and less effective protests in its name raise the possibility that pro-regime actors might be attempting to shape protest efforts in ways that would facilitate regime crackdowns, although the group makes no such accusation. It is also possible that some other group or individual sympathetic to the protest movement issued the ”fake” call unwisely but without ill intent.

The Neighborhood Youth of Karaj added that its organization consisted of field leaders and researchers who carefully selected protest dates and locations, suggesting that some anti-regime protest groups have established organizational structures.[3] The group’s statement endorsed calls for protests on December 5-7, possibly providing the group with enough time to regenerate necessary organizational capabilities and/or supplies. Another anti-regime social media user that frequently circulates calls for protests urged protesters to practice patience, start recruiting members, and collect ammunition in preparation for the next protest wave.[4]

Regime and IRGC media channels published a video threatening to attack Azerbaijan using rhetoric similar to that used about Iraq during the Iran-Iraq War. IRGC media channels posted “first we take Baku and then Jerusalem” alongside the video of a notional highway running from Iran to Israel via Azerbaijan (there is no such highway, of course).[5] The video includes text asking “where does the road to Jerusalem pass?”[6] The Iranian regime and IRGC have repeatedly published anti-Azerbaijan messaging that blames the Azerbaijani government for instigating unrest in Iran, as CTP has previously reported.[7] The November 27 video, however, alludes to an IRGC rhetorical refrain during the Iran-Iraq war that the Iranian regime used to justify mobilization for a ground offensive into Iraq late in the war: “the road to Jerusalem passes through Karbala.”[8] The phrase linked the Iranian offensive, part of Iran‘s military operations against Saddam Hussein’s 1980 invasion, with the Islamic Republic of Iran’s express mission to export the Islamic revolution and ultimately liberate Jerusalem.[9] Parallel messaging in the November 27, 2022 video suggests that elements of the regime are setting conditions to rally IRGC personnel to defend Iran against a similar attack supposedly perpetrated by Azerbaijan, presumably referring to the ongoing protests. The video’s appropriation of the “road to Jerusalem“ line likely resonates with IRGC personnel, especially senior officers who fought during the Iran-Iraq war.

At least six protests took place in four cities across four provinces. CTP assesses with high to moderate confidence that protests occurred in the following locations on November 27:

CTP assesses with low confidence that protests occurred in the following locations on November 27:

Note: CTP defines small protests as fewer than 100 individuals, medium protests as between 100 and 1,000, and protests as over one thousand. 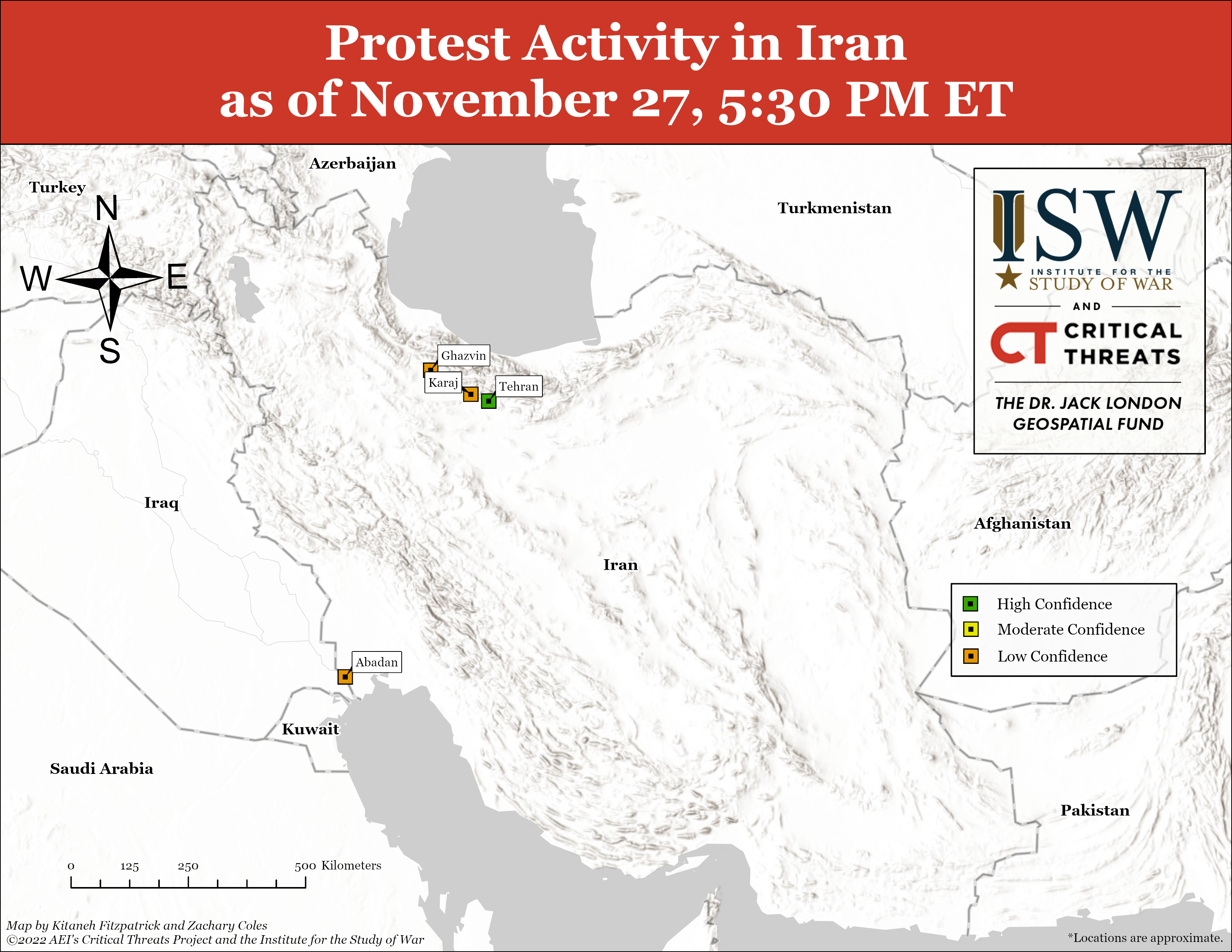 Cultural and parliamentary entities have proposed legal measures that would expedite protester arrests and empower elite members of the regime. The Iranian health and science ministers approved a policy that facilitates disciplinary action for acts of dissidence, including “insulting Islamic or national rituals” and makes students liable for participating in university protests on November 27.[19] The Parliamentary Research Committee similarly drafted a plan that would intensify sentences relating to espionage or cooperation with ”hostile” foreign governments. The plan reportedly specified that cooperating with anti-regime actors—including foreign governments, think tanks, media outlets, and economic institutions—constituted ”corruption on earth,” a crime punishable by death in the Islamic penal code. The plan conversely proposed that officials sanctioned or ”persecuted” by malign foreign actors were eligible to receive benefits historically reserved for veterans.[20] Regime officials sanctioned by the US and the European Union are overwhelmingly members of the regime elite, many of whom benefit from regime corruption, and this plan would only further enrich and reward them even as ordinary Iranians suffer from the structural economic woes made worse by some of these sanctioned individuals. A Parliamentary Digital Economy Taskforce additionally ratified a plan that provides pre-verified, pro-regime digital actors with high-speed internet access on November 27.[21]

Iraqi Prime Minister Muhammad Shia Al Sudani will travel to Tehran on November 29 to mediate tensions between Iran and the Kurdistan Regional Government (KRG). KRG Prime Minister Masrour Barzani and KRG President Nechirvan Barzani met with Iraqi and US-led International Coalition officials on November 27, closing out the diplomatic campaign they began by meeting with a plethora of Iraqi officials and political actors on November 22. The KRG likely seeks Baghdad’s support in halting Turkish and IRGC attacks in Iraqi Kurdistan, as well as deterring Iran from the ground invasion into Iraqi Kurdistan that it has repeatedly threatened to conduct. Prime Minister Masrour Barzani met with International Coalition Deputy Commander General Andrew Gardner likely to request additional diplomatic pressure on Turkey to halt its air campaign into Iraqi Kurdistan.[22] Gardner and Barzani may also have discussed efforts to halt the IRGC attacks. President Nechirvan Barzani likewise met with Sudani, likely to request his support in negotiating with the Iranians.[23] Iraqi National Security Adviser Qassem Al Araji announced after the meeting that Sudani will travel to Tehran on September 29 to help defuse Iranian-KRG tensions.[24]